The in-depth analysis as to what really happened in Florida you will not find anywhere else.

During the November 8, 2022, midterm elections, the Florida Republican party shined, led by Governor Ron DeSantis and Senator Marco Rubio, while the highly anticipated Red Wave barely registered as a red ripple… if that.

Republicans across this oceanside state made monumental gains. The red tsunami generated by Gov. Ron DeSantis permeated all of Florida. His impact was so tremendous that it produced major Republican seat gains and dealt a fatal blow to Democratic dominance in once deep-blue Palm Beach County.

The Palm Beach County shift was widespread and deep. The state’s most populous county, Miami-Dade, also went Republican red. Of the three big South Florida counties, only Broward remained in Democratic command — though it’s less blue than it’s been in a generation. 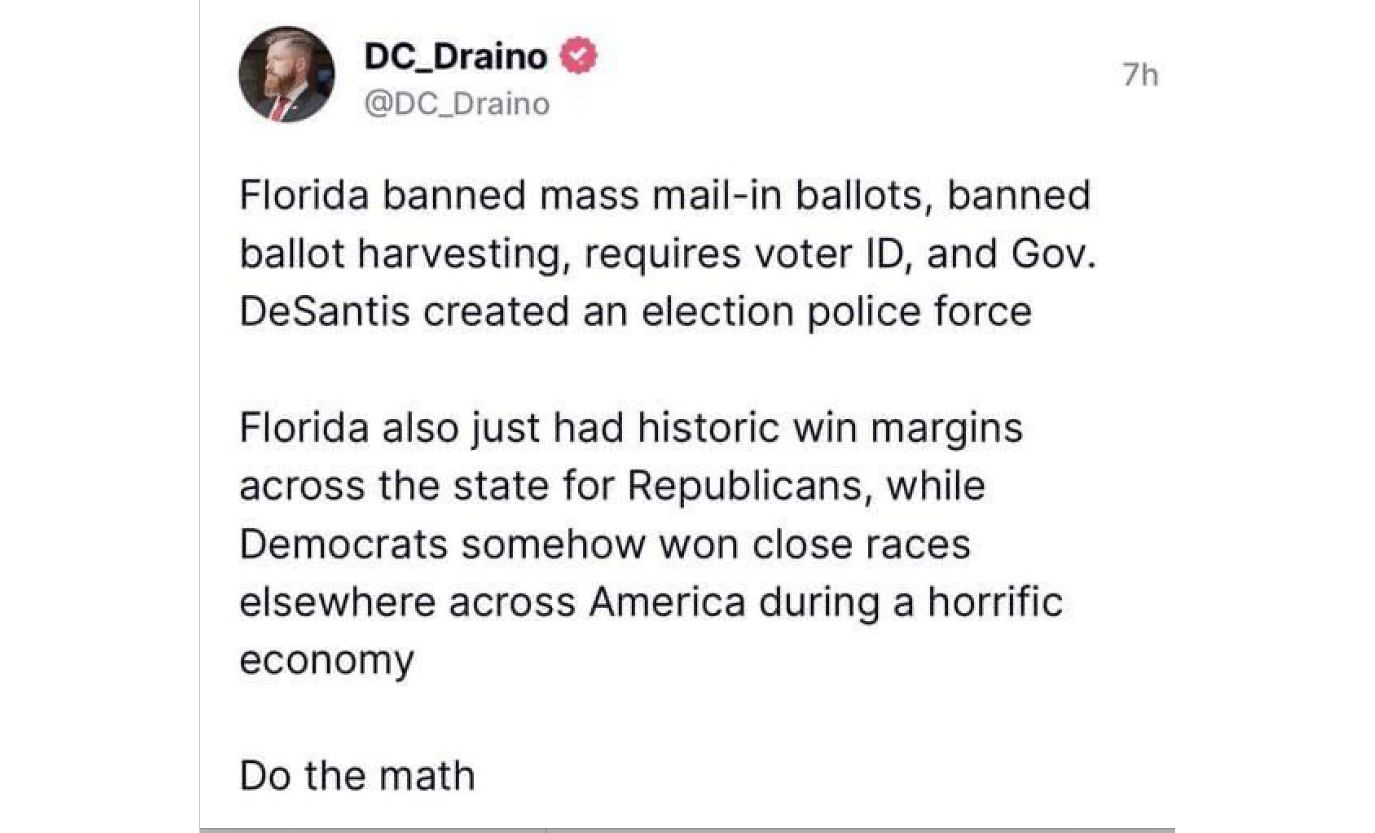 Governor Ron DeSantis, who managed to ink out a victory in 2018 by less than 33,000 votes over Democrat rival Andrew Gillum, won by a massive landslide this year by over 1.5 million votes.

Though Florida’s red wave was powerful, it was surprisingly tepid elsewhere in the country. Midterm elections such as this traditionally signal scores of victories for the party not commanding the White House, yet this year voters across the U.S. bucked that trend… or so it seems.

“That Dem turnout problem in Florida? Yes, it was real – and massive,” tweeted Dave Wasserman, the U.S. House editor of the nonpartisan Cook Political Report.

“Luckily for Dems, it didn’t really materialize anywhere else. Between Dems crushing competitive OH/MI/NH/PA/TX House races but dragging in FL/NY, this is the most uneven midterm I’ve ever seen.”

So, what was the secret to the Republicans’ success in Florida, while on a national scope, Republicans mostly fizzled in their efforts to win back the Senate and the House?

What most mainstream media outlets claim as Florida’s success, is probably misleading at best. 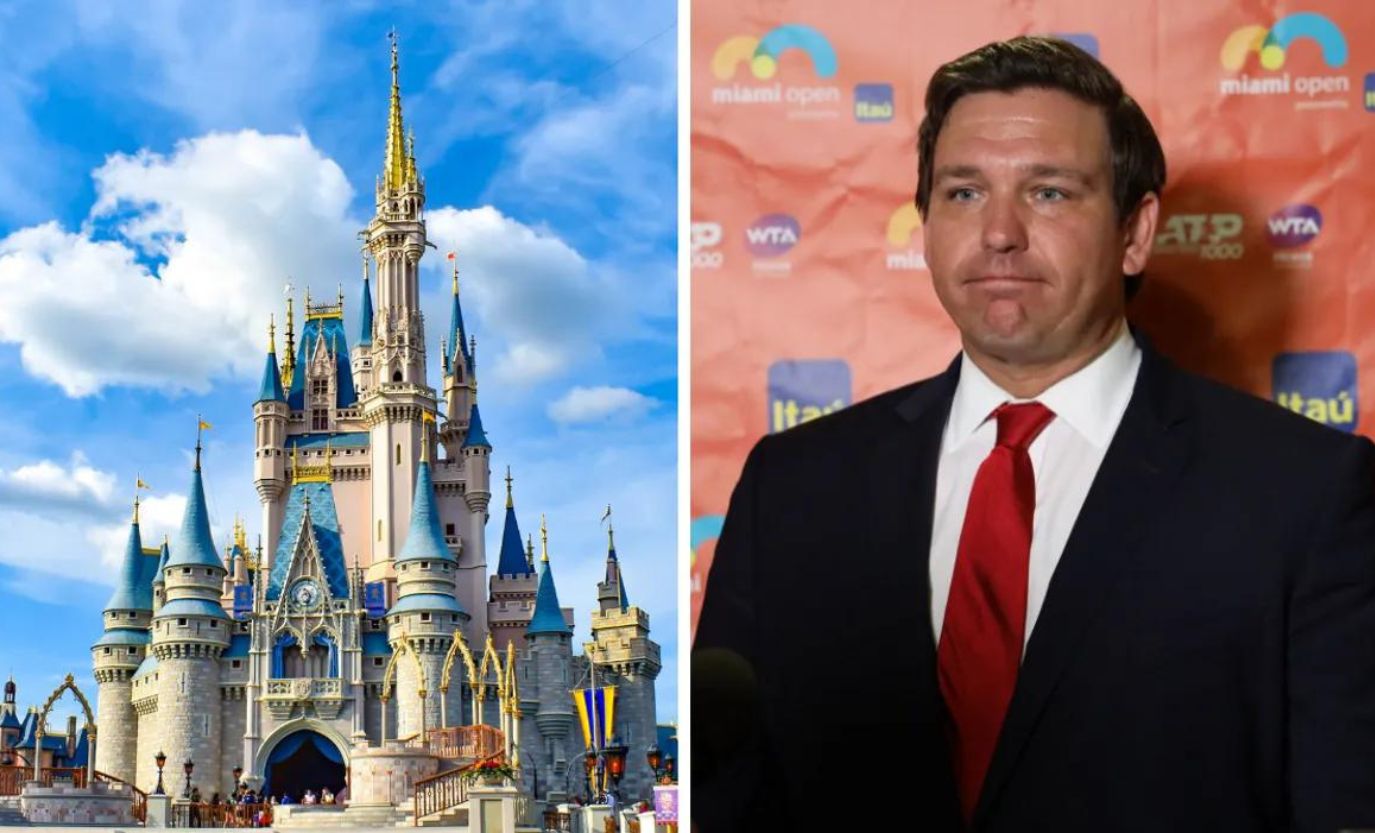 DeSantis spent lots of time in Palm Beach County, including a stop in Boynton Beach on the last day of his campaign. There’s no doubt that his time invested their paid dividends.

“The coattails for DeSantis were massive in Palm Beach County,” Johnson said. “Ron DeSantis has figured out the formula to have Trump’s policies with none of the stain,” Johnson said.

Democrats opposed nearly everything DeSantis did for Florida. They called on [DeSantis] to lock down Florida during the Covid pandemic in 2020. He refused. Florida stayed open. The citizenry rejoiced.

He refused to buckle to the woke mobs and their fanatical agenda that most Governors capitulate to, including most who govern in deep-red states such as Texas, my home state.

Florida, remarkably, has a state budget overflowing with cash and no debt, while being one of the small handful of states that doesn’t impose income tax.

Furthering his feats for Florida, DeSantis took on Disney and their radical LGBTQ agenda, after state Republicans passed bills to strip Disney of autonomous status. He championed anti-CRT legislation that taught children to “hate” themselves based on their race. 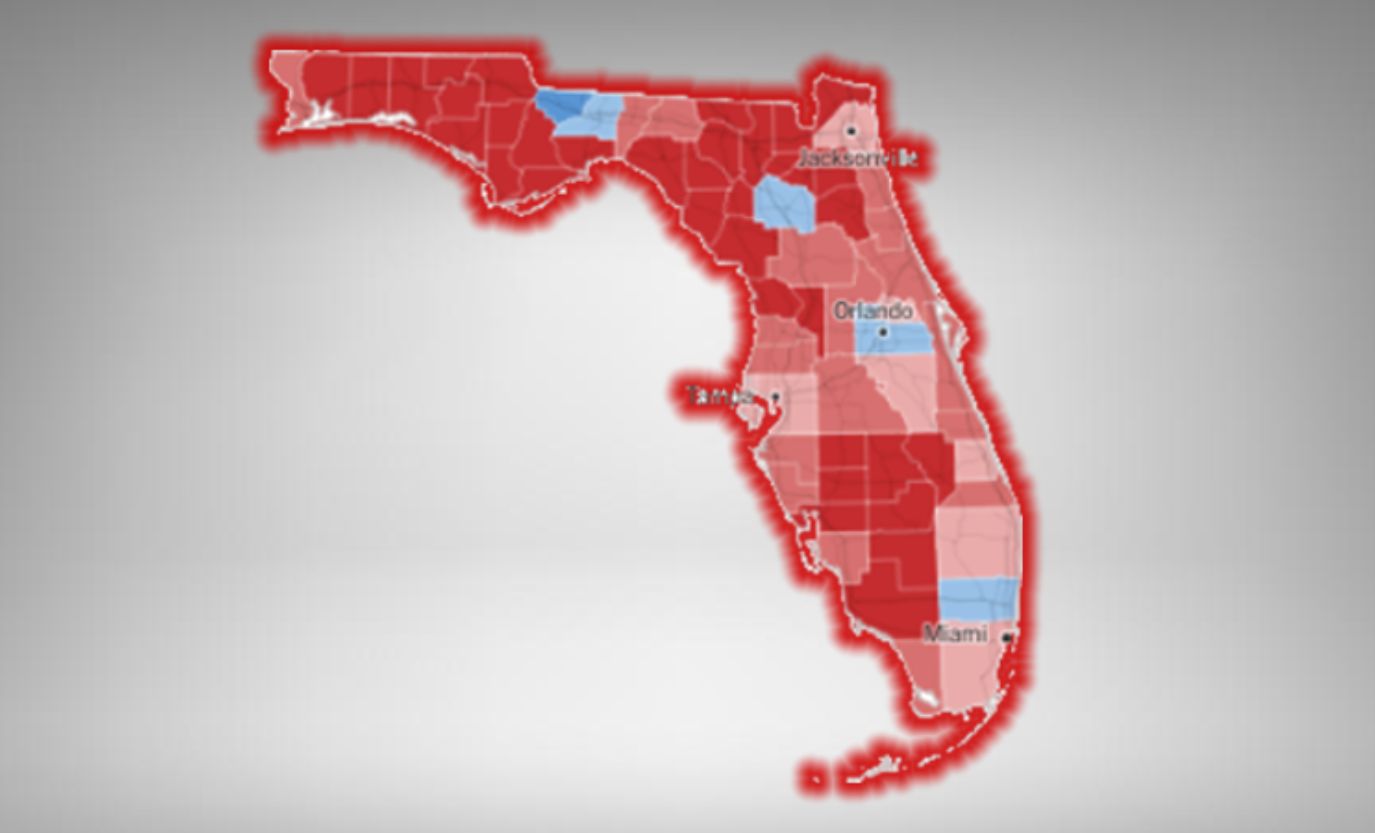 While all of these victories played a major role in the Red Tsunami that swept across the Orange State on Tuesday, one major factor that is being overlooked by virtually all of the mainstream media, the most critical contributor, is Florida’s Senate Bill (SB)-524.

This legislation strengthens election security measures by requiring voter rolls to be annually reviewed and updated, strengthening ID requirements, establishing the Office of Election Crimes and Security to investigate election law violations, and increasing penalties for violations of election laws. To read more about the bill, click here.

After signing the bill into law earlier this year, Governor DeSantis released the following statement:

“Twenty years ago, nobody thought Florida was a prime example of how to conduct elections, but we have become a national leader by running the most secure elections in the country,” said Governor Ron DeSantis.

“We need to do more to ensure our elections remain secure. We have ended ballot harvesting, stopped drop boxes and the mass mailing of ballots, and banned Zuckerbucks, and this bill will give us more resources to make sure bad actors are held accountable.”

“In 2020, Florida set the example of a well-run election for the rest of the nation to see,” said Rep. Perez. “SB 524 is an example of our commitment to always do better and continue to be the best state in the nation for secure and accurate election results.”

SB- 524 increases the penalty for ballot harvesting from a first-degree misdemeanor to a third-degree felony, punishable by up to five years in prison, a $5,000 fine, and up to five years of probation.

In other words, Florida made “stealing elections” a felony, and they employed a police force dedicated to ensuring elections are safe and secure. If caught, you will be prosecuted in Florida, while in virtually the rest of the nation, you will not.

I reside in Harris County, Texas, the nation’s most populous county. Many consider this region most corrupt county nationwide. 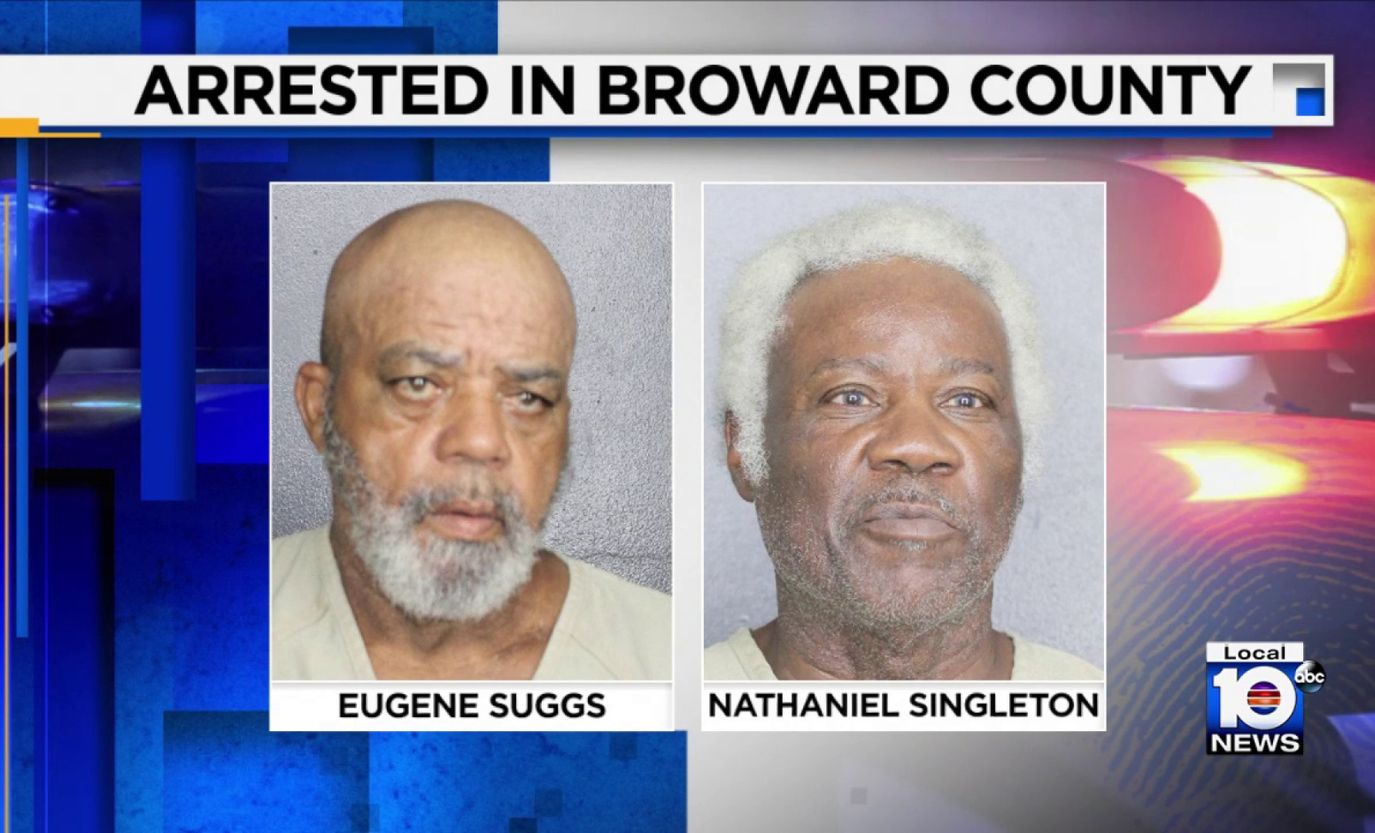 Texas’ failed attempts to make elections safe and secure have been dismal at best, with the passage of Texas SB-1. Our bill has little bark and even less bite, with corrupt Democratic district attorneys who rarely, if ever, prosecute known illegal ballot harvesters. In many cases, they are complicit in the illegal operations themselves.

In the once great Lone Star State, you are now more likely to be prosecuted for exposing voter fraud, than for committing it.

In Arizona, where Katie Hobbs (D) narrowly leads Kari Lake (R) by just a few thousand votes as I am writing this piece, she [Hobbs] is also the Arizona Secretary of State. It is her job to ensure the integrity of that state’s elections, and she refused to recuse herself from overseeing her own election.

“Katie Hobbs’ incompetence in running Arizona’s elections is so obvious that even the Arizona Supreme Court had to take the unprecedented move to call her out for her [many] errors,” the spokesperson said.

“Given that Hobbs hasn’t even shown up to work for months, and that just last week thousands of voters were mailed faulty ballots, why should any Arizonan trust her to successfully administer this election?” 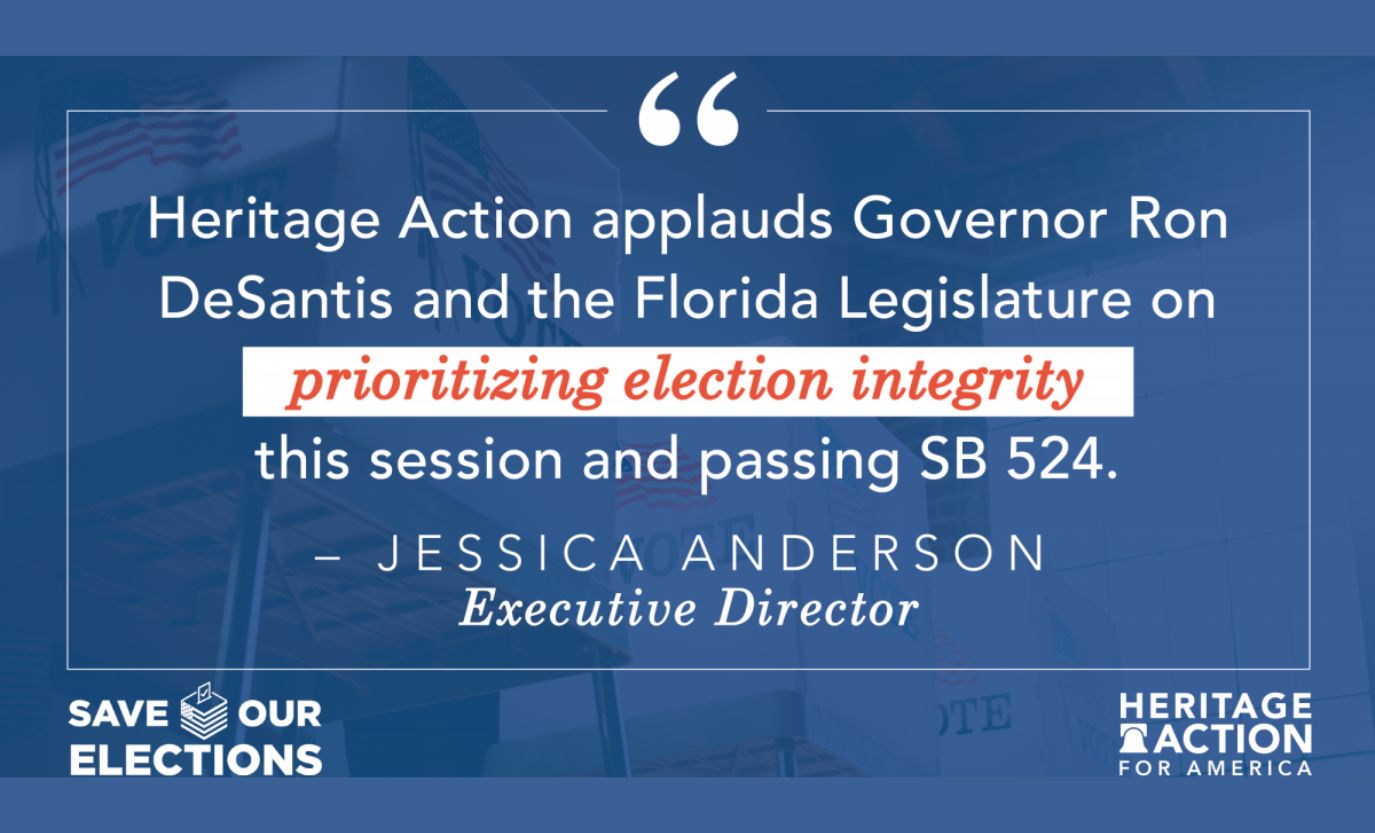 “This is why Kari Lake continues to call for Hobbs to recuse herself from overseeing the 2022 elections – no Secretary of State should be in charge of the same election that he or she is running in,” the spokesperson added.

In other words, the old proverbial saying “fox guarding the henhouse” has come home to roost. It would be like the FBI asking the John Gotti mafia family to police itself. And as anyone would gather with eyes willing to see the facts, countless voter irregularities and scandals have evolved in Arizona’s midterm elections this cycle.

What’s the solution, if any? The success and popularity that Governor DeSantis has in his state of Florida should be a roadmap for other red states to follow.

Don’t compromise your state’s voter integrity laws and with those who wish to game the system and cheat. Stand your ground and your state will love you for it, as they have embraced Governor DeSantis, who has a glowing 64 percent approval rating in Florida.

The likelihood of that happening is slim to none, however. Most Republicans have a much greater fear of their own shadow than does Punxsutawney Phil.

On The Eve Of Destruction

The Death of Morality in a Postmodern America