Houston candidate and Christian Dr. Johnny Teague, a well-respected pro-Jewish author running for Congressional District 7 for November 8 has been unfairly hit by a media whirlwind recently concerning his award-winning book The Lost Diary of Anne Frank.

Jewish Telegraphic Agency writer Andrew Lapin has circulated a spurious report with claims that Dr. Teague’s highly-acclaimed book is one that would “undermine Anne Frank’s Judaism”—even while Lapin admits he has yet to read Teague’s book and formed his opinions of it just three hours after requesting the Republican candidate for a “copy of the book” on October 31.

Lapin’s creatively conjured critique of a book he has never read has reached major news outlets across Texas and the nation. Such irresponsible reporting possesses no constructive value and can only be understood as a last-ditch endeavor to create social rifts between Jewish and Christian voters in the midterms. 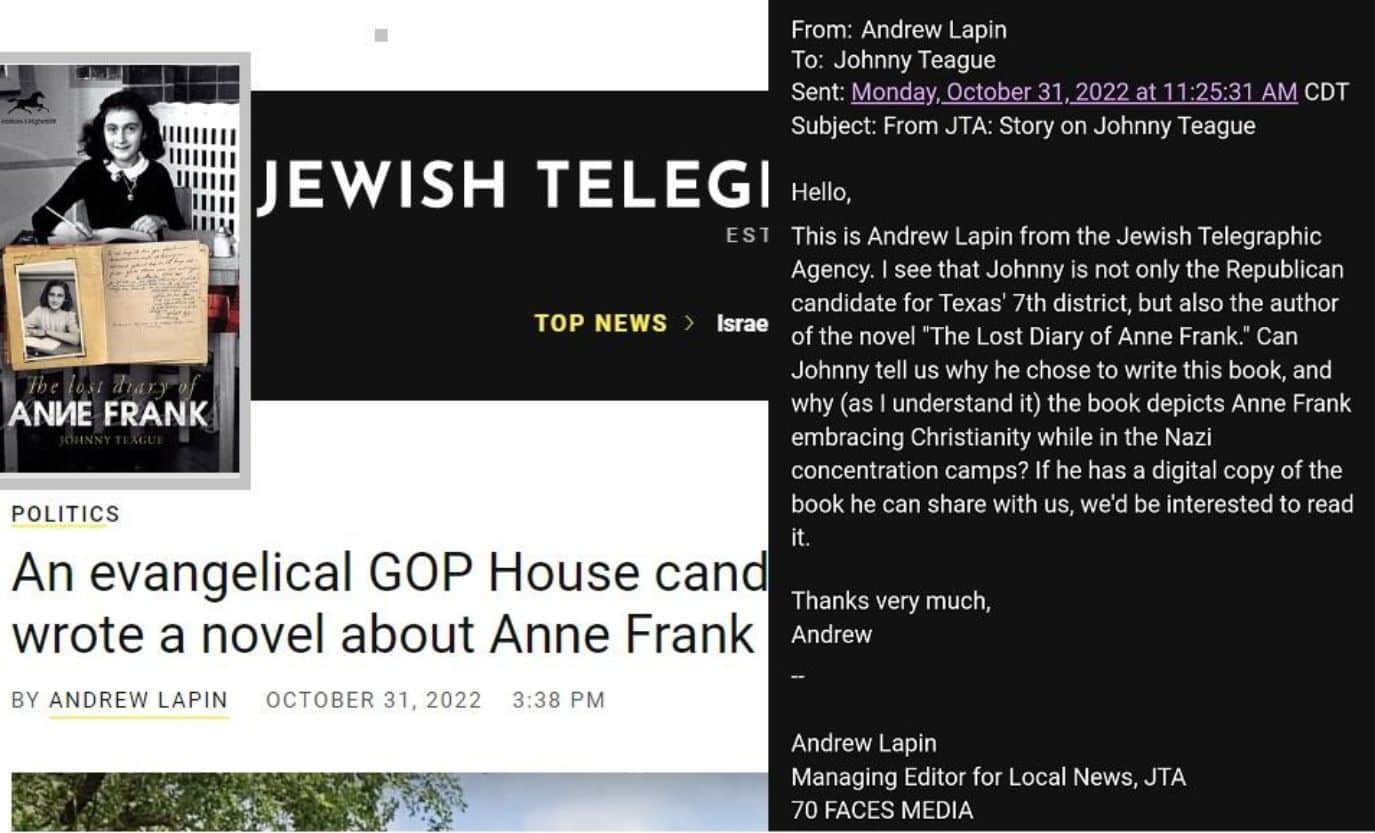 These latest attacks now come against an avid scholar of Jewish life: doctoral-degree holder Pastor Teague, who shepherds a local Houston church in Katy. Throughout his career he has made visits to Israel four times and explored the most authoritative Holocaust memorial organization there—Yad Vashem. The Lost Diary of Anne Frank was published in 2020 as his introspective contribution to the landscape of persecution and genocide studies.

Attempts to recolor genuine Christians as National Socialists (Nazis) come at a time when races between Democrats and Republicans in many voting districts nationwide remain too close to call all the way to election day. The comfortable leads usually enjoyed by certain Democrats have eroded in recent weeks, and Republicans have fielded passionate candidates with a distinct vision for economic transformation in Texas.

In Texas CD7, Rep. Lizzie Pannill Fletcher-D has been trying to hold on to office despite clear signs that Dr. Teague has a more pragmatic plan for his constituents, and that he will actually try to fight endemic crime and resolve unaffordable energy prices.

Despite the malicious media attacks on Pastor Teague’s book, any cursory examination of it reveals the keenness with which he has discerned the frightened state of an innocent girl sent to die, and his immense reverence for the Jewish people. His extended diary of Anne Frank functions almost as an epitaph to the “thoughts and exposures” that Frank faced in the Secret Annex along the Prinsengracht in Amsterdam, and it has become “the diary she was not allowed to write” after being shipped off to death camps out east, says Dr. Teague in an email, November 1.

For his work, Johnny Teague was honored with prestigious mention in the AJS honor roll of 2021, partly sponsored by the Sami Rohr Prize for Jewish Literature. The AJS, or Association for Jewish Studies at 15 West 16th Street, New York City is a Jewish organization, and the largest literary body in the Jewish community. An achievement as important as it is impressive, this accolade given to Dr. Teague seems not to matter to left-wing pundits. As Democratic efforts escalate toward election day, family-centered conservatives such as Dr. Teague come under fire simply because of an adherence to Christianity, commitment to public safety, or preference for low taxes. 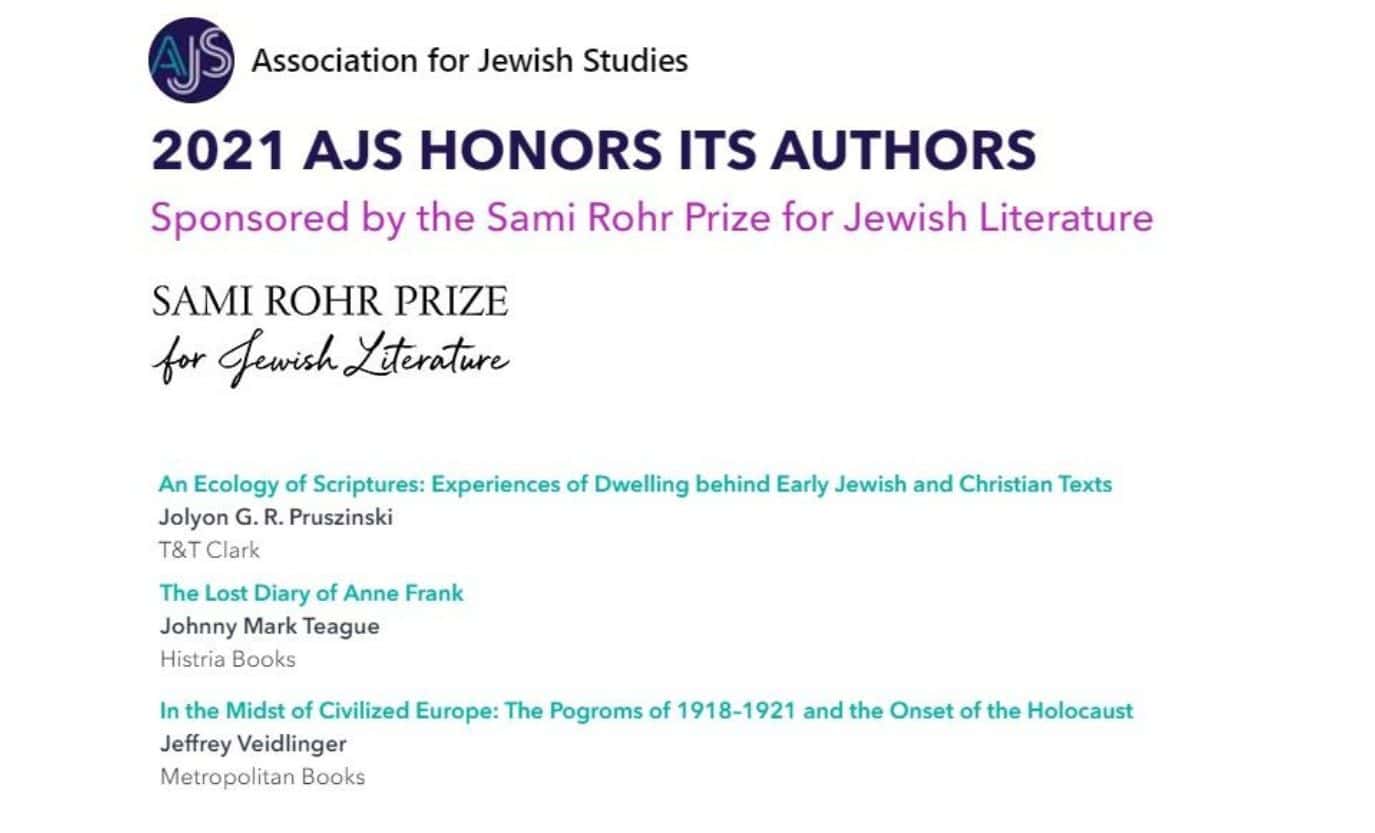 But there is a silver lining: the historical Anne Frank takes a kinder view toward both Jews and Christians. In both The Lost Diary of Anne Frank and the canonical diary of Anne Frank from WWII, Frank touches on matters of Christian faith, but the circumstantial suffering she endures takes center-stage in both books. Her Jewishness is not lost in either book, and—consistent with all the facts at hand—she exhibits none of the anti-Christian angst that so defines liberal left-wingers today.

The Frank Family an Example of Learning and Openness

Anne Frank, on her part, wrote about Christianity and Christian observance in her diary—and even received gifts at Christmas, talked about how Otto (her dad) wanted older sister Margot and her to know about the life of Jesus Christ and the accounts of the New Testament, and believed it inappropriate to be scornful of Jesus.

“To give me a new project as well,” Anne writes in her WWII diary, “(my father) asked Mr. Kleiman for a children’s bible so I could finally learn something about the New Testament.”

Known today for her resilience and strength of character, Anne felt sorry for Peter van Pels, a teenager of Dutch, German, and Jewish origins, who hid with the Franks in the Annex, noting that “he isn’t religious, scoffs at Jesus Christ and takes the Lord’s name in vain; and though I’m not Orthodox either, it hurts me every time to see him so lonely, so scornful, so wretched.”

The Jewish people are largely scattered across three cultural denominations: Orthodox, Modern Orthodox, Masorti-Conservative, and Reform. While there are significant adherents in Reform who are agnostic or atheistic, the remaining streams of Jewish life remain open to theistic faith and belief in God.

Anne Frank, while ethnically Jewish, indicated no clear allegiance to any of these streams during her life. She never recanted spiritual faith, however, and atheism had yet to become a trend in the 1940s. Her comfortability with the Christian faith shows through, and she saw no battle between Jewish ethnicity and the Christianity around her. 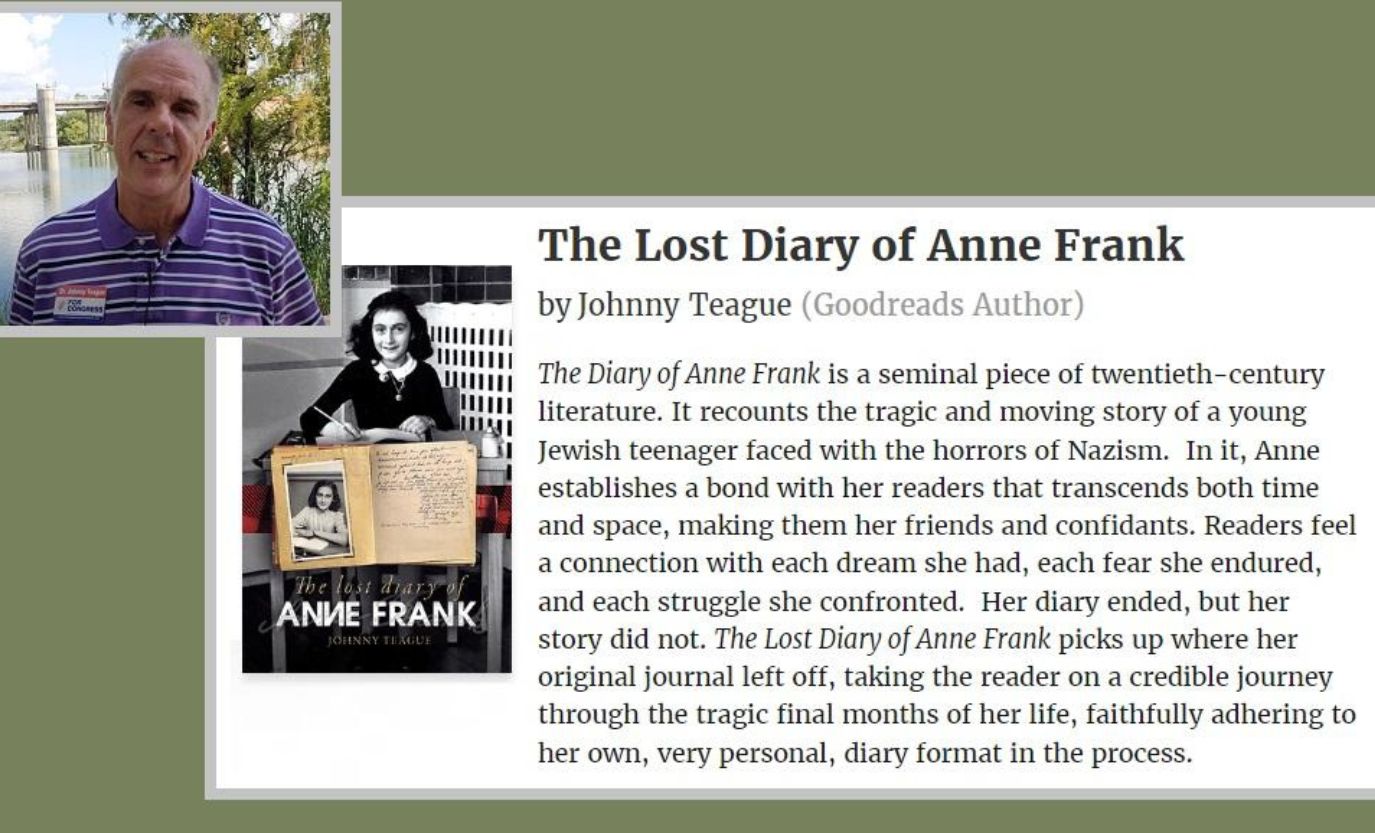 “Jews and Christians wait (for WWII to come to an end), the whole world waits, and there are many who wait for death,” the young girl writes, mentioning Jews and Christians together, before talking about the rest of the world. The camaraderie she feels for both Jews and Christians stands in stark contrast to the animosity and sheer misrepresentation offered by commentators such as JTA’s Andrew Lapin.

As the mood on the ground swings in favor of Dr. Teague, the incumbency of Rep. Lizzie Fletcher looks shakier than ever. If anything, Rep. Fletcher’s recent actions have proven detrimental to the everyday lives and physical security of ordinary Jews in Judea and Samaria, an area of historic Israel commonly known at the U.N. as the West Bank.

In 2020, Rep. Fletcher denounced Israeli jurisdictional authority over Jewish communities in Judea and Samaria, claiming that this amounted to “annexation” (even though Jews were already living there in unprecedented numbers). Along with other Democrats heavily vested in Islamist interests such as Ilhan Omar and Rashida Tlaib, Fletcher forms part of the curiously-named “Annexation Watch,” a group of politicians pushing for Israel to withdraw protection for Jewish communities in Judea and Samaria.

A euphemistically-worded memorandum to defense and national leaders in Israel was published by Annexation Watch during Netanyahu’s tenure, as a call to Israel to halt plans to directly govern Jews in the West Bank. In a move that would only allow Palestine to govern Jews in the area—an option obviously unfeasible from any security standpoint, Fletcher nevertheless co-signed this memo with other well-known Democrats in DC, proving that actions speak louder than words in politics: Fletcher does not care much for Jewish communities located seven thousand miles away, even though any lack of Israeli government there affects upwards of 450,000 Jews.

That’s right. 450,000 Jews. By contrast, only about 30,000 Jews live in the District of Columbia, and we wonder what they will hope to say to Fletcher and other Democrats about the wellbeing of nearly half a million Jewish folks in Judea and Samaria. 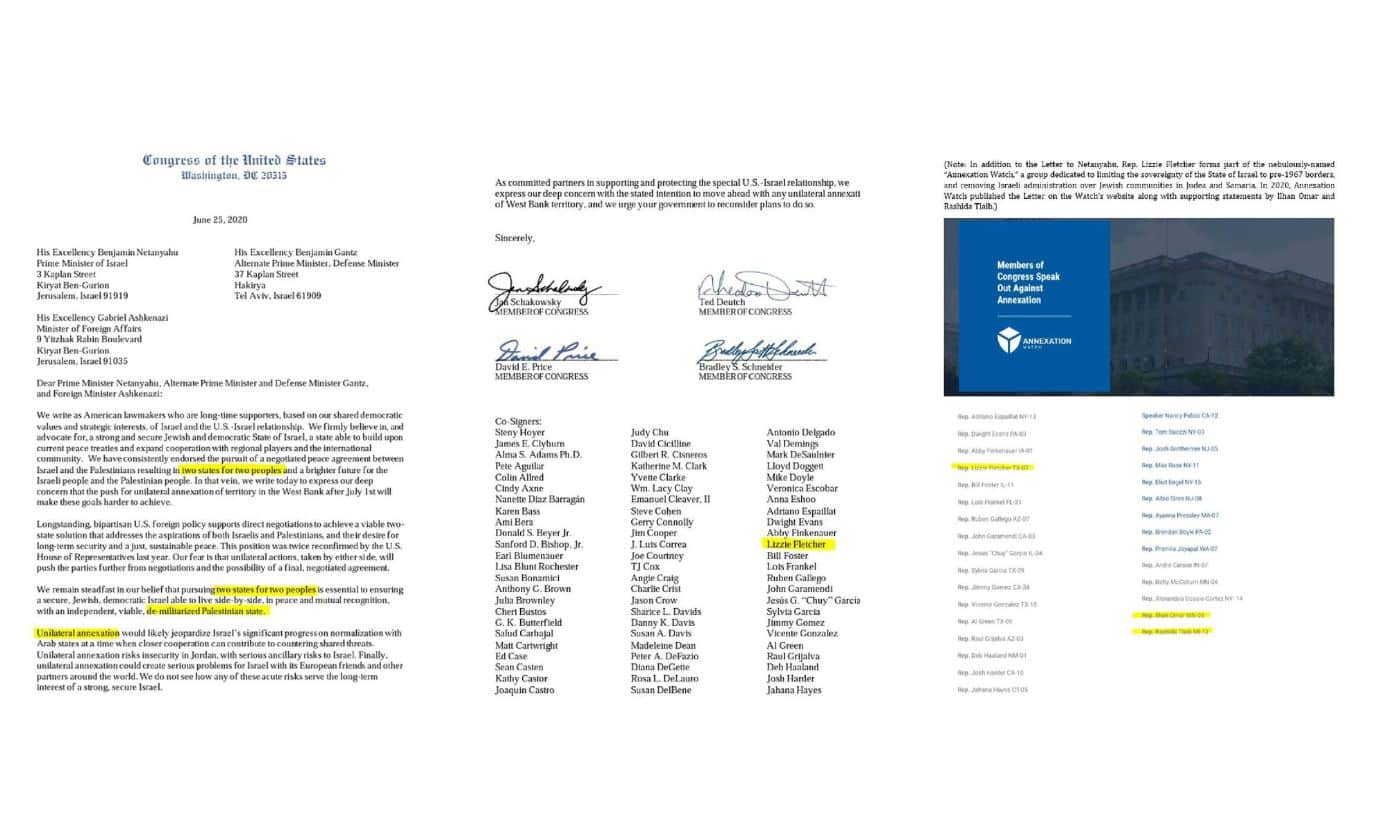