The Federal Grill and its owner Matt Brice made national news in the last year when they “bucked the system” and re-opened before Governor Greg Abbott lifted restaurant pandemic restrictions.

Five weeks into the lockdown, Brice was beyond frustrated as he watched big-name stores like Wal-Mart and HEB operate normally, while restaurant business was completely curtailed. He was worried about his employees to the point he felt he had to do something. So he reached out to the local mayors and put together a re-opening proposal. He met with them at City Hall and found an advocate in Hedwig mayor Brian Muecke.

The plan to open on that Friday was a quiet one, but not for long. On Thursday, Brice got a last-minute call from Michael Berry asking him to join his radio show in 30 seconds. So Brice’s wife ushered the kids away and Brice talked about how important it was to get his employees back to work and to give people choice. The next day, every media source from CNN to Fox News, both local and national, contacted Brice about his plans. While Brice didn’t appreciate their attempts to make it a battle between Harris County Judge Lina Hidalgo and himself (“Look, I have nothing against her at all. I just think we’re a free country.”), he did appreciate the attention it brought to his re-opening.

The Federal Grill was awash with over 3,000 reservations within days of the media coverage. Brice says it was never his intention to seek attention – all he cared about was getting money back into the pockets of his employees. And his staff was thrilled. Almost all of them returned to work immediately.

Not only that, but Brice began receiving phone calls and donations from all over the country. In an effort to help other businesses struggling from shutdowns during Covid, Brice created a foundation and gifted the proceeds to local gyms and hair salons that also faced longer shutdowns. 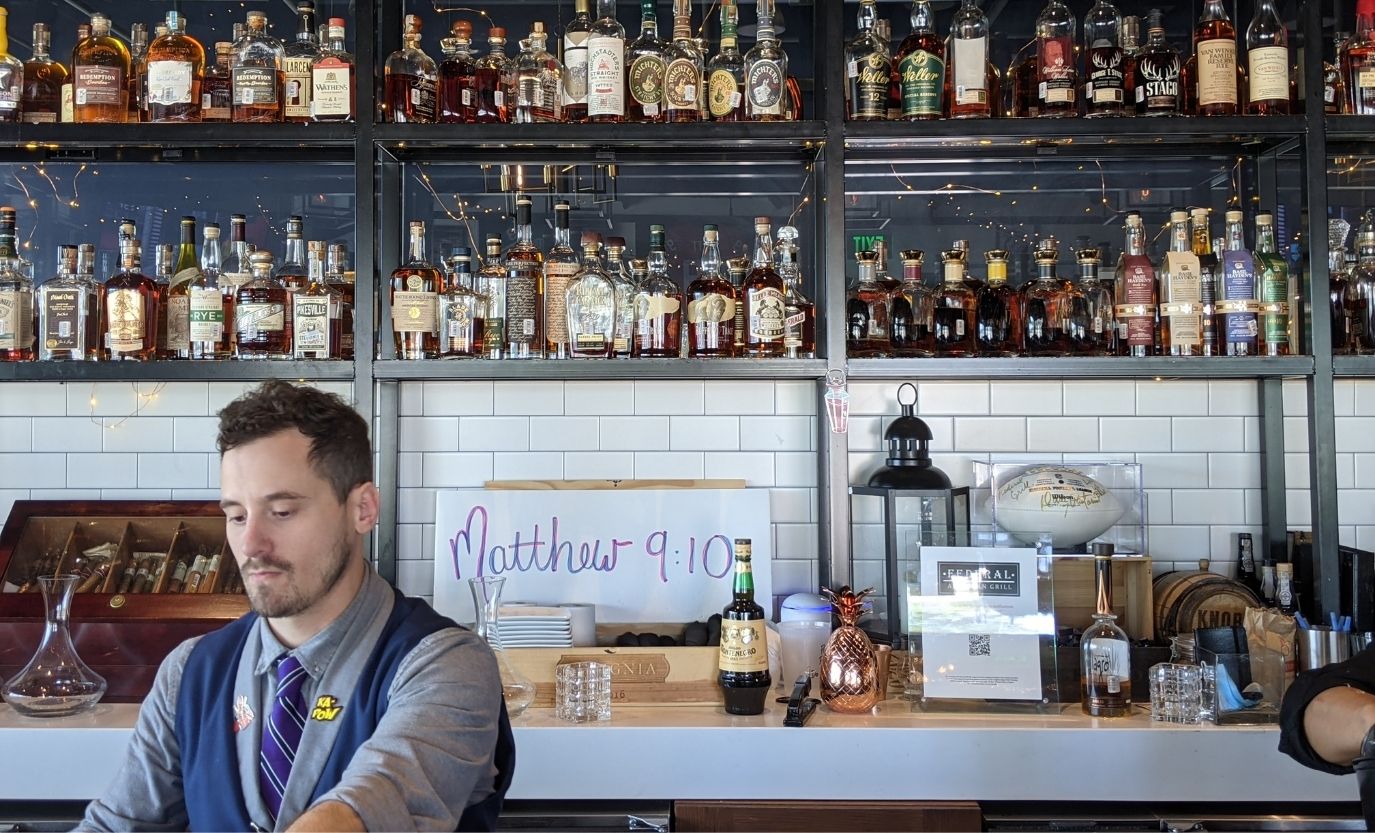 Since then, business has been booming, and it’s easy to see why. Brice’s attitude about his business, which has grown to three locations, is, “This is our vessel to improve people’s lives, the people who come in, the people who work here, everyone this business touches.”

The restaurant makes donations to schools, churches, and fundraising auctions. It sponsors high school football jerseys and helps meet the needs of Brice’s kids’ school, Memorial Lutheran School. As he says, the community was there for him in a big way during Covid, and he does everything he can to be there in a big way for the community.

And of course, restaurants are about food, about the experience, about how the staff makes you feel. I can personally say that it hits a homerun on all counts. On a recent visit, I was impressed by the kindness and professionalism of everyone on staff. The ambiance is both warm and hip, and the bar is richly expansive and even sports a Bible verse, Matthew 9:10. The open kitchen creates delicacies that are beautifully plated and served with a flair.

But it’s the food itself that really takes the prize. The menu is thorough without being intimidating. Two appetizers really stood out, but for wildly different reasons. The Fried Cheeseburger Eggrolls are inventive, so much so that Brice’s next venture is to box and freeze them to be sold in grocery stores. I ate every bite, even knowing I would be eating a lot more food. Just to be ornery, I also ordered the least popular appetizer – Tommy Lyons BBQ Bone Marrow. I’m 100 percent convinced they are less popular because people are afraid of them. I was, but after a quick lesson about how to scoop out the marrow and pile it with the accompanying toppings, I was eating the creamy concoction right from the spoon. Tommy Lyons, Brice’s grandfather-in-law, would be proud! 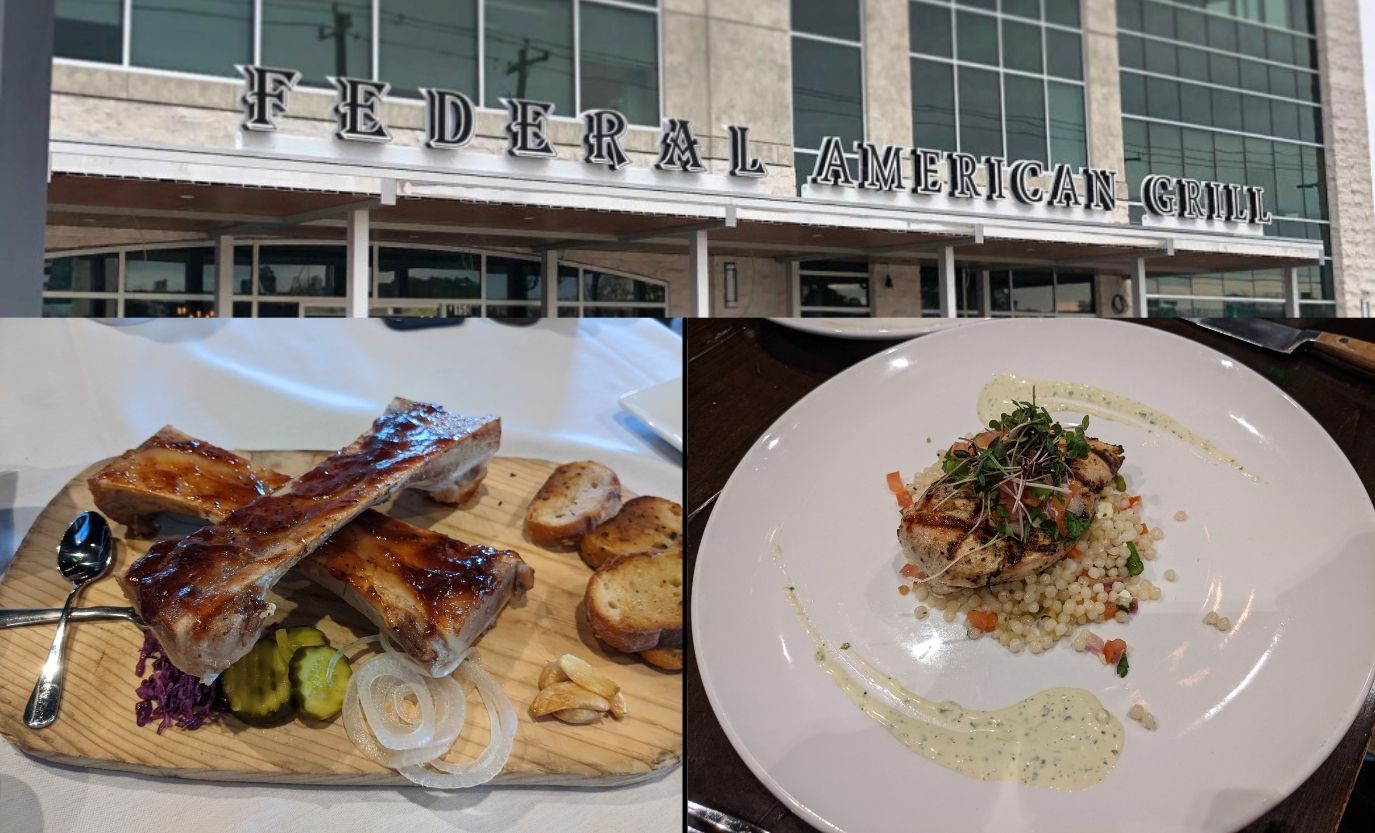 I also sampled two of the more famous entrees. The Chicken Federale was the healthier option – a fantastic piece of organic chicken topped with feta and an avocado cilantro cream sauce and served on a bed of grilled couscous, the tiniest bit of diced pico, and chopped asparagus. On the less healthy side, I opted for Janice’s Meatloaf, named after Brice’s mom. This version is cooked on a flattop for crispiness, then oven-baked. For an extra twist – and really the game–changer to my taste buds – was the addition of fresno pepper. Every bite was followed by a subtle kick that reminded me this wasn’t my mother’s meatloaf. A bordelaise sauce from the short ribs and a veal demi-glace took this dish over the top.

Needless to say, the food at The Federal Grill stands alone, but it’s nice that it doesn’t have to. Brice’s commitment to his company’s core values, to putting people first, and to improving people’s lives is reason enough to visit this excellent restaurant.

Visit the Federal Grill at one of its three locations: 510 Shepherd Drive, 8731 Katy Freeway in Hedwig, and 727 W. Grand Parkway in Katy.