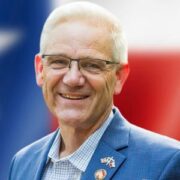 Billy Graff’s career can best be described as one of service. As a USMC veteran, an entrepreneur, pastor, teacher, and non-profit founder, Graff has spent his lifetime leading and inspiring his community. Most recently, Graff has received two Special Congressional Recognition certificates for his full-time work in leading the disaster relief non-profit organization, IConnect. In his role as Founder and President, he has raised and managed over $5 million and rebuilt 500+ homes at no cost to families directly impacted by disaster in the greater Houston area. Graff has been married to his wife Dawn for 40 years and has three children and six grandchildren. They make their home in Conroe, Texas. He is a constitutional conservative standing for liberty and freedom. He is running for Montgomery County Judge. Billy4Texas.com

Service and Leadership. It is Impossible for One to Exist Fully without the Other

I’ve spent my lifetime learning what it means to fully inhabit servant leadership. As a…