Award-winning singer-songwriter Amy Grant has gone the extra mile to prove an allegiance to leftist causes, in an announcement that her niece will be married in a “bride and bride” ceremony on her countryside estate in Franklin, Williamson County, bordering Nashville and Davidson County in Tennessee. Nashville is famously known in Christendom as the cradle of country and country-gospel music.

A household name in religious pop and Christian faith and practice, Grant’s main career years were from the 1980s to the first decade of the millennium, but her recent redirection has catapulted her to darling status in left-wing circles of late. Grant has modified her strictly Christian worldview to one that celebrates the normalization of countercultural practices such as LGBTQ+ unions. This has happened in tandem with shifting norms in America that have repositioned homosexuality and homosexual marriages as proper culture, not “countercultures.” As a consequence, Christian values are taking a backseat in the wake of such developments, and it is the Christian religion that is being widely regarded as countercultural today.

Grant has quoted scripture in a bid to justify the new paradigm, “Honestly, from a faith perspective, I do always say, ‘Jesus, you just narrowed it down to two things: love God and love each other.’ I mean, hey — that’s pretty simple.” 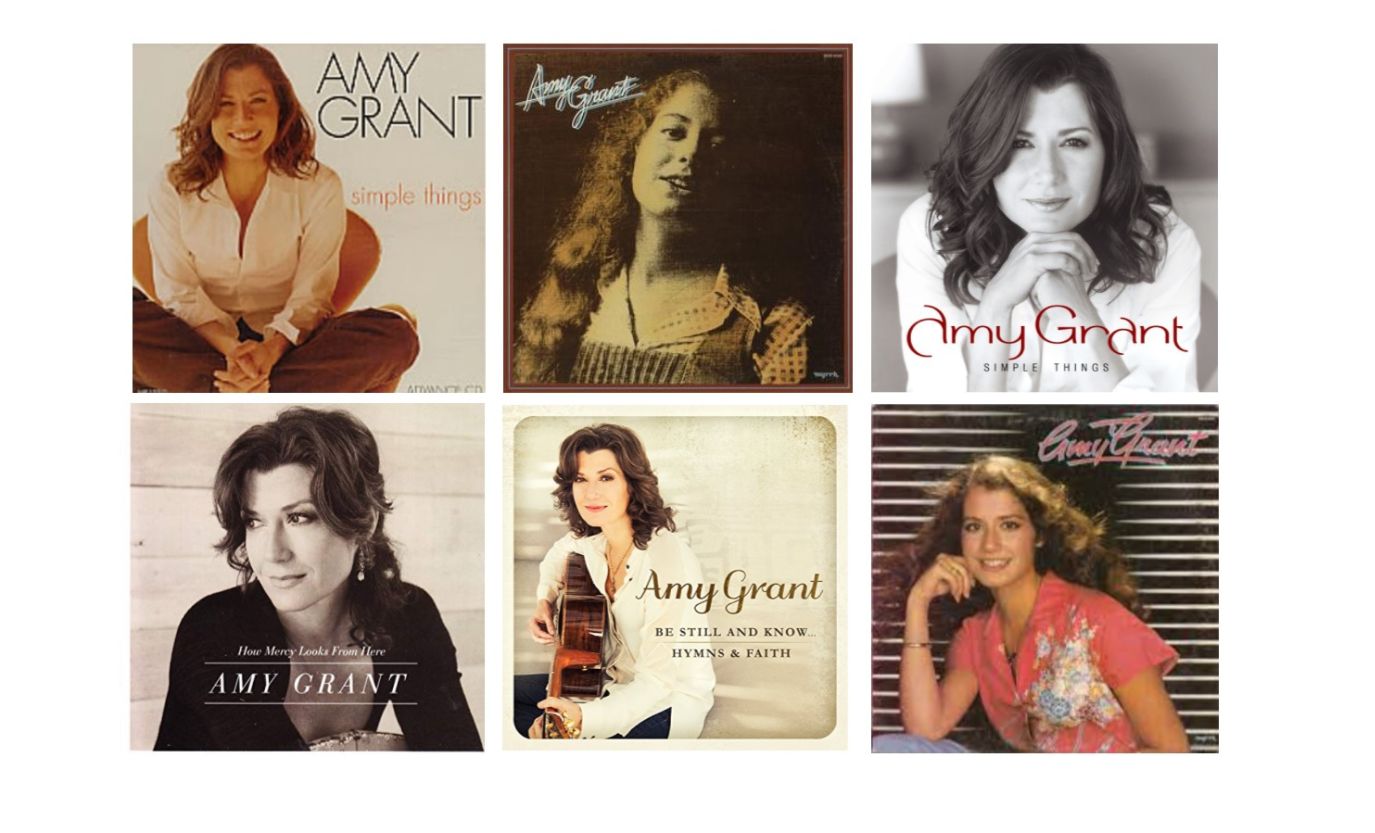 While Grant’s two marriages have been heterosexual – a twenty-year relationship with fellow musician Gary Winther Chapman (no relation to author Gary Chapman) that ended in divorce in March of 1999, and her marriage in March 2000 to longtime friend Vincent Gill, Grant’s recent openness to homosexual normalization in her family is likely the result of industry pressures in Nashville and the music profession in general, and not any sort of latent dissatisfaction with her love life.

The Christian music scene is thus the latest casualty in a long line of cultural victims that have fallen prey to the dictates and provisions of the left-wing politics in North America. Christians in the armed services, believers in the workplace and at major corporations, and Christian adherents on campus have been called out for their ‘intolerant’ beliefs and sidelined or culturally boycotted. This Cancel Culture has real effects: the personal development goals of these innocent individuals are hampered and squashed by rabble rousers who hate Christian values and will destroy people’s lives in order to shore up a defense of LGBTQ+ culture.

The book of Romans in the Christian compendium starts off with these valid complaints in its first chapter (1:21-32):

“Although (some believers) knew God, they did not glorify Him as God, nor were thankful, but became futile in their thoughts, and their foolish hearts were clouded over. Claiming to be wise, they instead became fools and moved from the glory of the incorruptible God to an image of corruptible man, or birds, or four-footed animals and creeping things. Therefore God also gave up on them, so that they sank into uncleanness to dwell in the wrongful desires of their hearts and dishonor their bodies among themselves – for they have exchanged the truth of God for a lie, and worship and serve the creature rather than the Creator Who is blessed forever, amen. 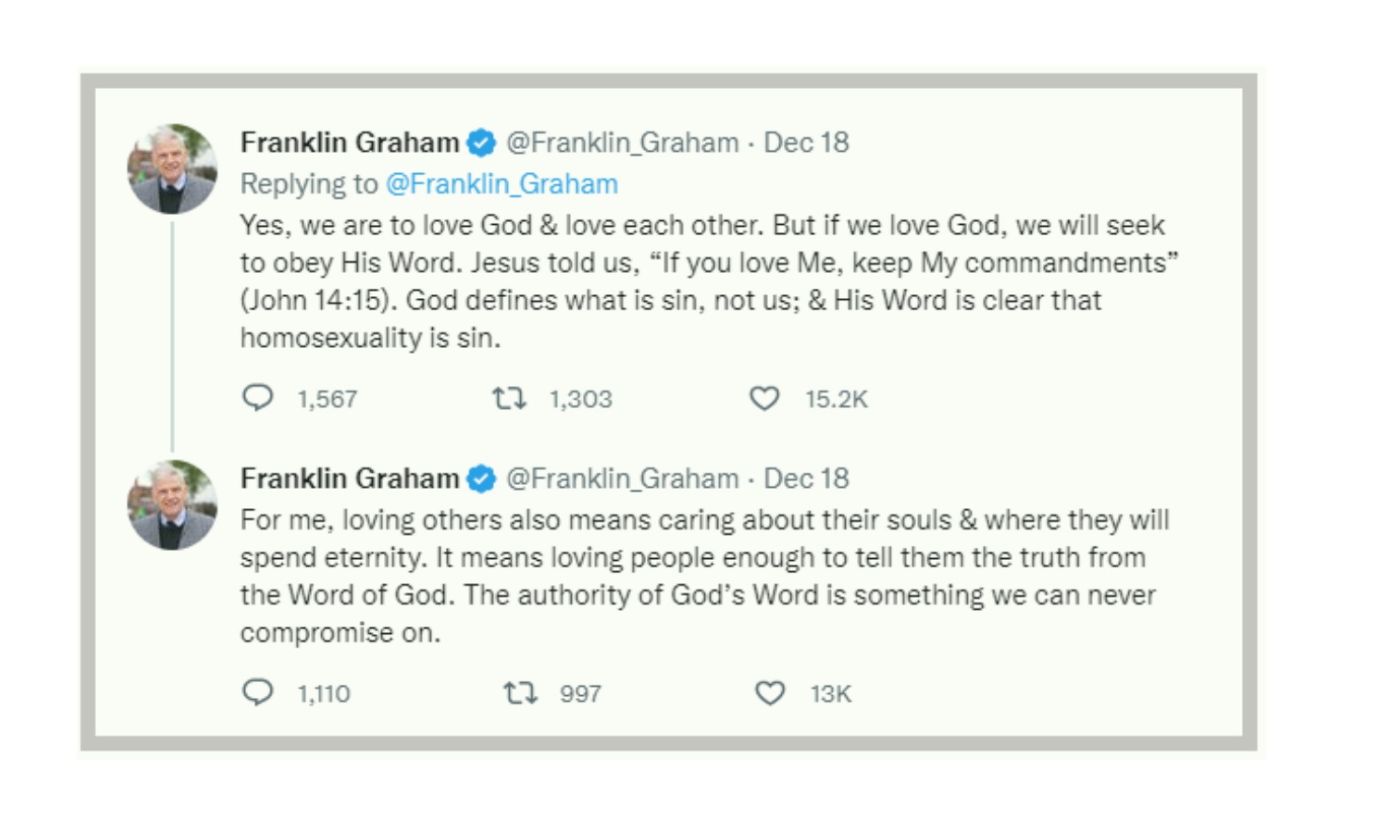 “For this reason God gave them up to vile passions. For even the women abandoned what is natural for what is against nature. Likewise also the men, who depart from women, and burn in their lust for other men: men with men committing what is shameful, and thus receiving in themselves the due penalty of their error.

“They do not like to retain God in their knowledge, so God gave them over therefore to a debased mind, to do those things which are not fitting; being filled with all unrighteousness, sexual immorality, wickedness, covetousness, maliciousness; full of envy, murder, strife, deceit, evil-mindedness, they are whisperers, backbiters, haters of God, violent, proud, boasters, inventors of evil things, disobedient to parents, undiscerning, untrustworthy, unloving, unforgiving, unmerciful – who, knowing the righteous judgment of God, that those who practice such things are deserving of death, not only do the same but also approve of those who practice them.”

Christianity does not pass death sentences on people who embrace homosexuality, or who are backbiters, warmongering boasters, dishonorable toward parents, or filled with covetousness and envy – and Christianity ought never be transformed into a version of Islam that metes out capital punishment for these things. However, the first chapter of Romans makes it clear what God feels in His heart: He does not approve of sinners who sin, and the price is death.

But who pays this price? Surely not the sinners listed in these passages. It is Christ of Nazareth who pays for the sins of the world, and He has literally gotten Himself crucified on His Cross in order to fulfill the harsh requirements of divine law. God’s justice is absolute, and payment is always demanded. To spare sinners the penalties of their sin, Jesus Christ has died in their stead and paid the price. This is the consequence of sin – an innocent Man, the Son of God literally had to die in order to comply with the debts of sin.

It is likely Grant has not discerned the magnitude of what a bride-bride or groom-groom marriage means. Willful sin – obstinate sin – in any way, shape, or form makes light of the sacrifice of Christ, and metaphorically drives the nails deeper into His palms.

But rightist-conservatives are not uniformly agglomerated in their perceptions of what our core values should be. In the now-trending Daily Wire news report on Amy Grant’s decision, the journalistic slant has veered off-tangent into a critique on Grant’s attire for one of her albums.

While outcry with regards to the legalization of homosexual marital unions is justifiable, a concurrently dismissive attitude toward feminine beauty certainly isn’t. There is no doctrine in Christianity – modern or historical – that prohibits women from dressing the way Amy Grant has in her albums. Worldwide, the Christian faith is known for its deeply human center and stands as a testament against strangulatory regulations preached by radical Islamists in regards of how women ‘ought to dress.’ 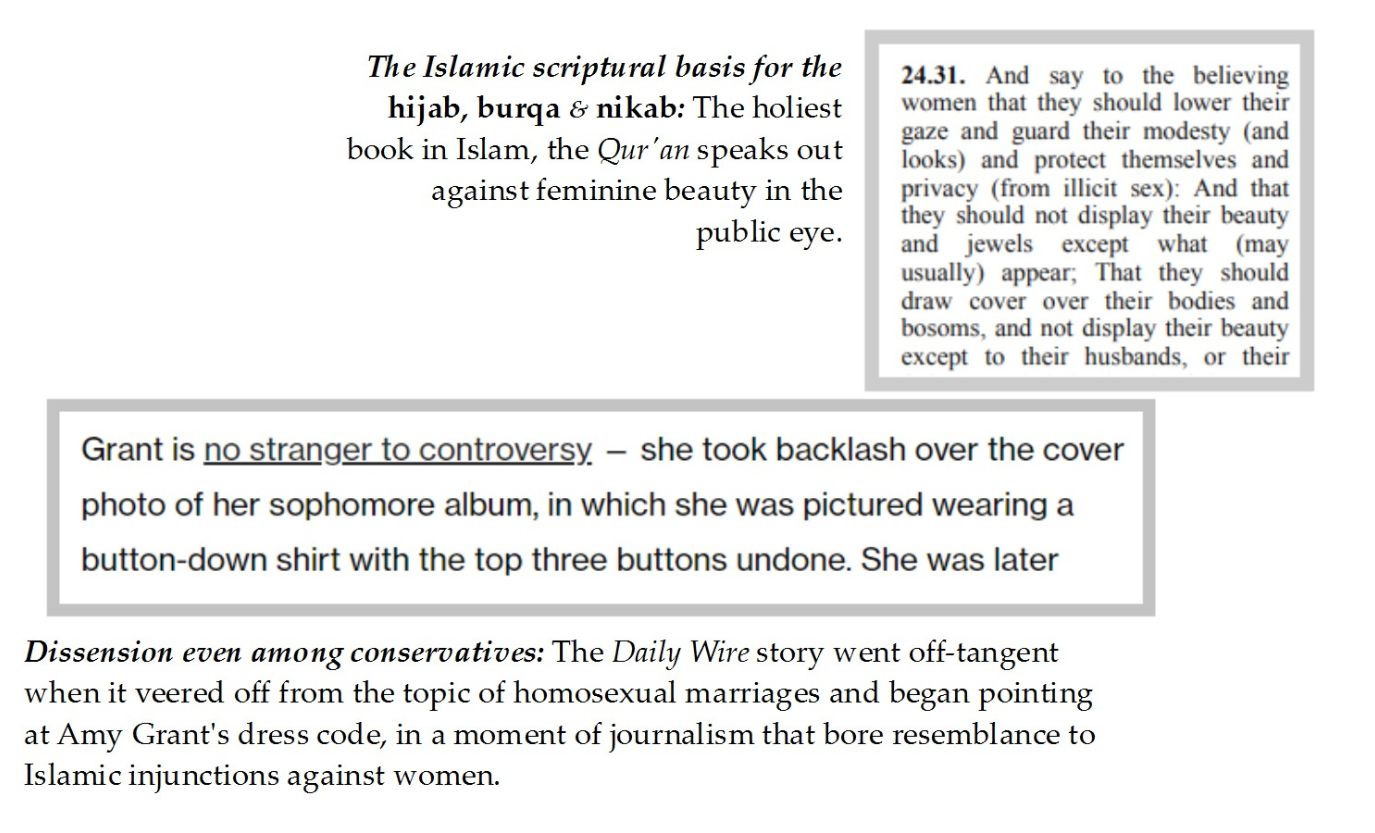 Indeed, Islam teaches that Muslim women should lower their gazes, guard their looks (i.e., prevent themselves from being gazed upon), and should ensure that their beauty isn’t displayed – “draw cover over (your) bodies and bosoms,” the Qur’an writes. Like the Daily Wire story that wrote of three buttons being too much if undone on a shirt, the Sura of An-Nur in the Qur’an (24:31) [a.] is adamant in no uncertain terms as to what amount of feminine beauty constitutes pious or less than pious behavior.

The Christian conservative movement in America is thus faced with a battle for sanity on two fronts: left-wing liberals who want to marginalize heterosexual relationships and normalize homosexual unions; and misled conservatives who believe mistakenly that the word “conservatism” means you have to behave like radical Islam, and earn God’s favor that way.

Rather, “conservatism” simply means what it says: to conserve that which is good, right, and true. By any measure, divine or temporal, feminine beauty isn’t criminal, and should in fact be celebrated and revered. News stories have to learn to stay on-point when it comes to what conservatism really is. Preservation of heterosexual unions as the perfect norm has nothing to do with attire, cuisine, walking gait, or sleeping patterns. These latter things are not dragged up for questioning in Romans chapter 1. It will be good for conservatives to come together in yearly summits to help clarify with one another as to what our core values should be in accordance with the spirit of the New Testament.