The State Government in Texas has released findings on election fraud investigations in a file published on December 19, 2022, Monday. These investigations cover the 2020 Presidential Election in Texas, and – in the interest of bipartisan fairness – probed the counties of Collin and Tarrant (the latter being the metropole of the city of Fort Worth), in addition to Dallas and Harris counties.

Back in September of 2021, the State Government in Texas had indicated in a memorandum that it would pursue investigations into elections conduct in these four most populous counties of Texas, with Collin and Tarrant selected based on their Republican leanings, and Dallas and Harris picked for their purportedly Democratic voter bases.

After John B. Scott was tasked with Secretary of State duties from October 2021, the pursuit of the truth has gone forth unabated – despite attempts to demean and ostracize the honorable characteristics of such investigations. Democrats have tried to deploy legal instrumentalities to try and protect the frustrating paradigm of suspected irregularities and elections misconduct. They have tried to sabotage a newer, 2022 audit of counties, but the latest findings of the 2021-commissioned audit published this week will throw a wrench into their gears, to say the least. 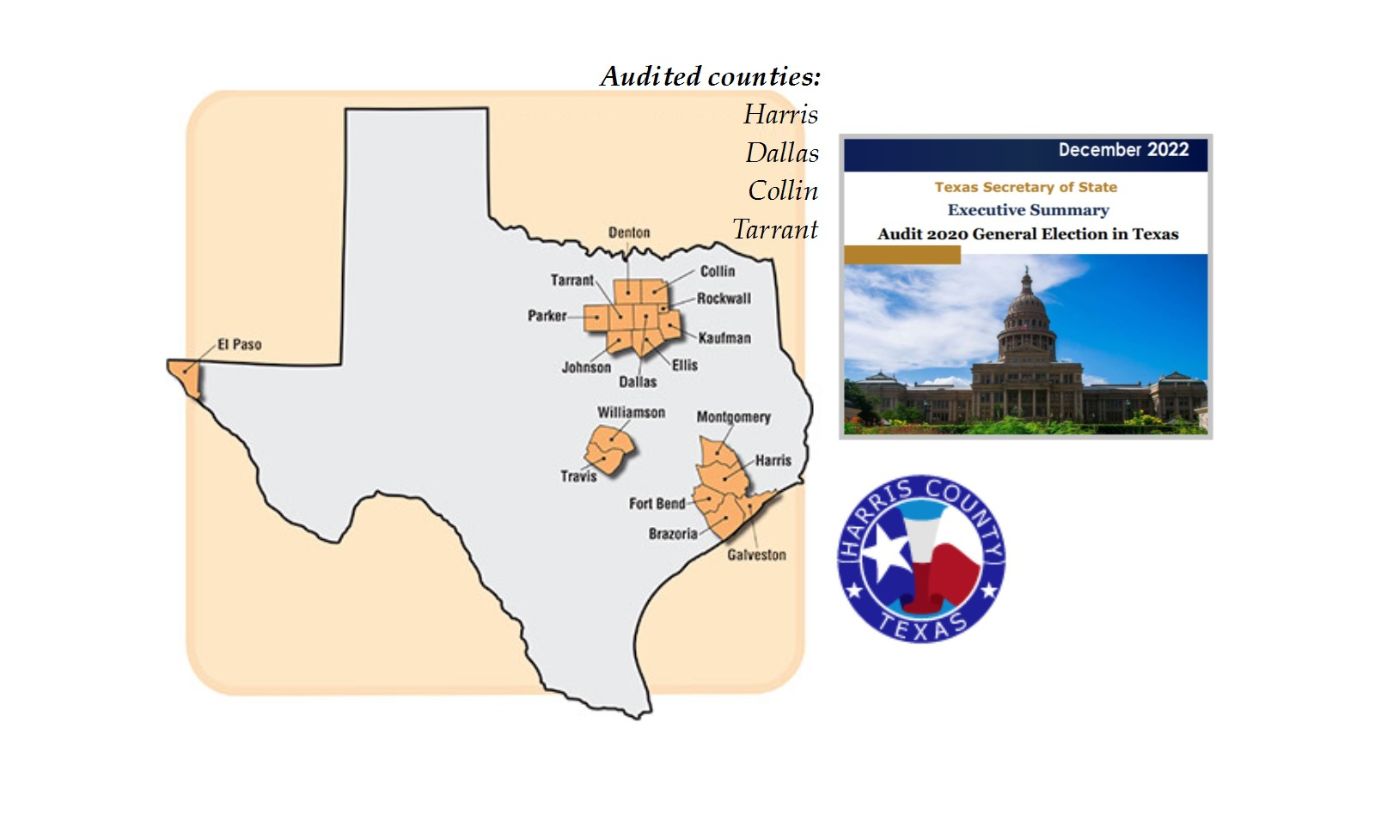 In the December 19, 2022 report compiled under the authority of John B. Scott, the phenomenon of mobile ballot boxes and their creation has become the one to watch. Scott is uniquely qualified to oversee issues of corruption – a juris doctor from South Texas College of Law in Houston, the city’s oldest law school, Scott is also a resident of Tarrant County (Fort Worth) and has put in 34 years as an attorney at law.

Katy and Fort Bend Christian Magazines have expressed grave concern in recent years over instances of election fraud in Harris County, South Texas, where the city of Houston is. With the publication of the State Government’s December 19 report, readers are now offered a comprehensive look at how the electoral process has failed Americans in Harris County.

The report points out that fourteen polling stations compromised their ballots in the November 2020 Presidential Election, and that mobile balloting boxes like the ones captured in Michigan this year were in use there. In regards of such boxes, election officials were “not able to provide documentation” on how the boxes were created. All in all, there were about 125,000 to 185,000 votes implicated in these shady and bewilderingly imperfect processes. Statistically this is a tremendous failing on the part of election officials in Harris County, who seem more beholden to the edicts and “values” of Democrat politicians, and less concerned with the voice of the people and what the average American wants.

By 2020, Harris County had become the most populous county in the state and among the top-five most significant urban agglomerations in the United States. Of her roughly 4.8 million people, there were 2,480,522 registered voters by 2020, but only about two-thirds purportedly cast their ballots (approximately 1.63 million citizens) in the Presidential Election.

But here’s the kicker: of these 1.63 million votes cast, a whopping 87.79% were early votes, i.e. voting that did not take place on Election Day (Tuesday, November 3, 2020). Early voting simply means absentee voting, or by-mail balloting, and the implications are enormous.

To wit, only 199,535 persons turned up to vote on Election Day in Harris County to pick either Trump or Biden for President of the United States.

It can be concluded that there is a general apathy among modern Americans for healthy political engagement and the electoral process. The dismal turnout in Harris County in the 2020 Presidential Election is a lens through which we can critique what has cropped up in the disconnect between the online and offline universes.

Online, people seem vested in politics, posturing and proclaiming with great fervour and an unshakeable angst. Civilians from all walks of life and all age groups seem vibrantly involved in the socio-political development of the United States. But when Election Day comes, there can be precious few who actually show up in-person at polling stations, and the physical turnout – such as 199,535 citizens out of an electorate of 2.48 million people – is a blight on American democracy indeed.

When electoral democracy was invented to include the citizenry (as opposed to only nobility being allowed to vote), the ballot box became all the more sacred and the best way to actualize your views and make them a reality. But voting and the sanctity of voting are being defenestrated in the United States – particularly in the past nine years, as America entered a post-Bush, hyper-postmodernist age of name-calling and anti-Western vitriol.

With the hundreds of thousands of absentee votes in Harris County in 2020 – and systemic failure in the vicinity of 125,000 to 185,000 votes compromised or lacking the procedural fundamentals to be properly traced, the state of democracy in Harris County is at its most fragile. Meanwhile, the 199,535 citizens who actually plodded to polling stations to vote are in a precarious situation: it is tempting to give up physical voting per se because you will have realized your vote did not make a difference in 2020 back when you got up early to queue. 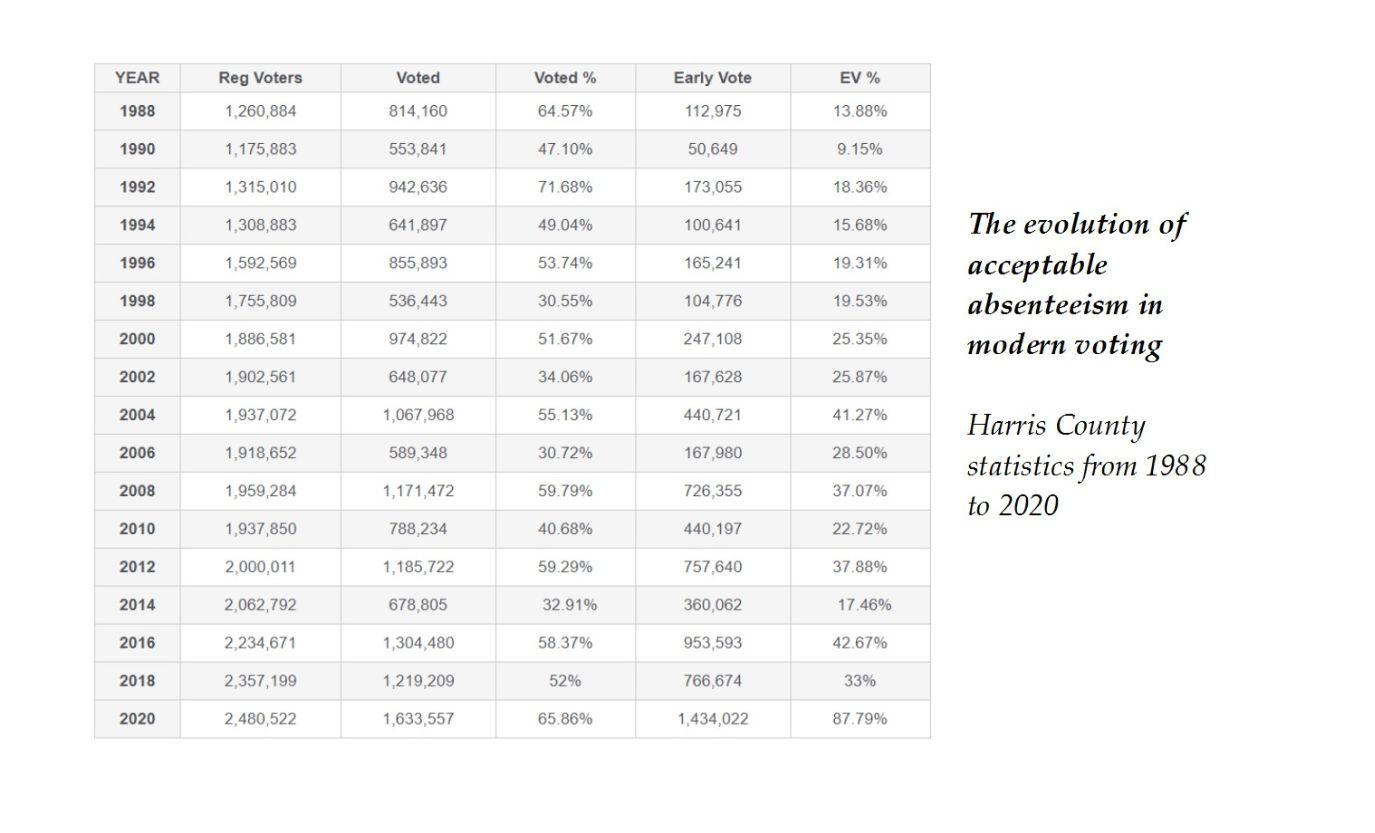 The Ethics (or Lack Thereof) of Early Voting

How is it conscionable for invisible balloting to account for eighty-seven percent of all votes tabulated? The figures only reveal the stark realities of elections in Harris. In 2020, it all came to a head when under thirteen percent of voters could be verified at polling stations and in-person. One election cycle earlier, in 2016, it was not as grievously bad: 57% of voting individuals were physically accounted for, but that was already a windsock pointed in the wrong direction. The downward trend of voters shying away from polling stations, and invisible votes stacking up from nowhere point to a broken elections system that rests on two crumbling pillars: citizens who do not show up, and elections manned by leftists who implement digital and machine options in the voting process.

What about monitoring, or supervision of some kind? Election monitors, political party representatives, and international election observers can do very little, because they undertake their observations on-site at polling stations. These professionals do not have the authority to peek into the mail to stare and sieve out incorrect or discrepant ballots. The full extent of their observations consists of looking on while elections personnel count up the votes: and the early votes are already filed in and being counted!

These by-mail ballots are not being provisionally excluded and routed for extra checks, they are not being examined, and they are not being scrutinized for their immense numbers: when 87% of your presidential election ballots are almost virtual in nature, with under 13% consisting of actual physical voting on Election Day, the possibilities for fraud are exactly what an older Chinese proverb warns: 可想而知 kexianger-zhi (the implications are immediately perceivable). 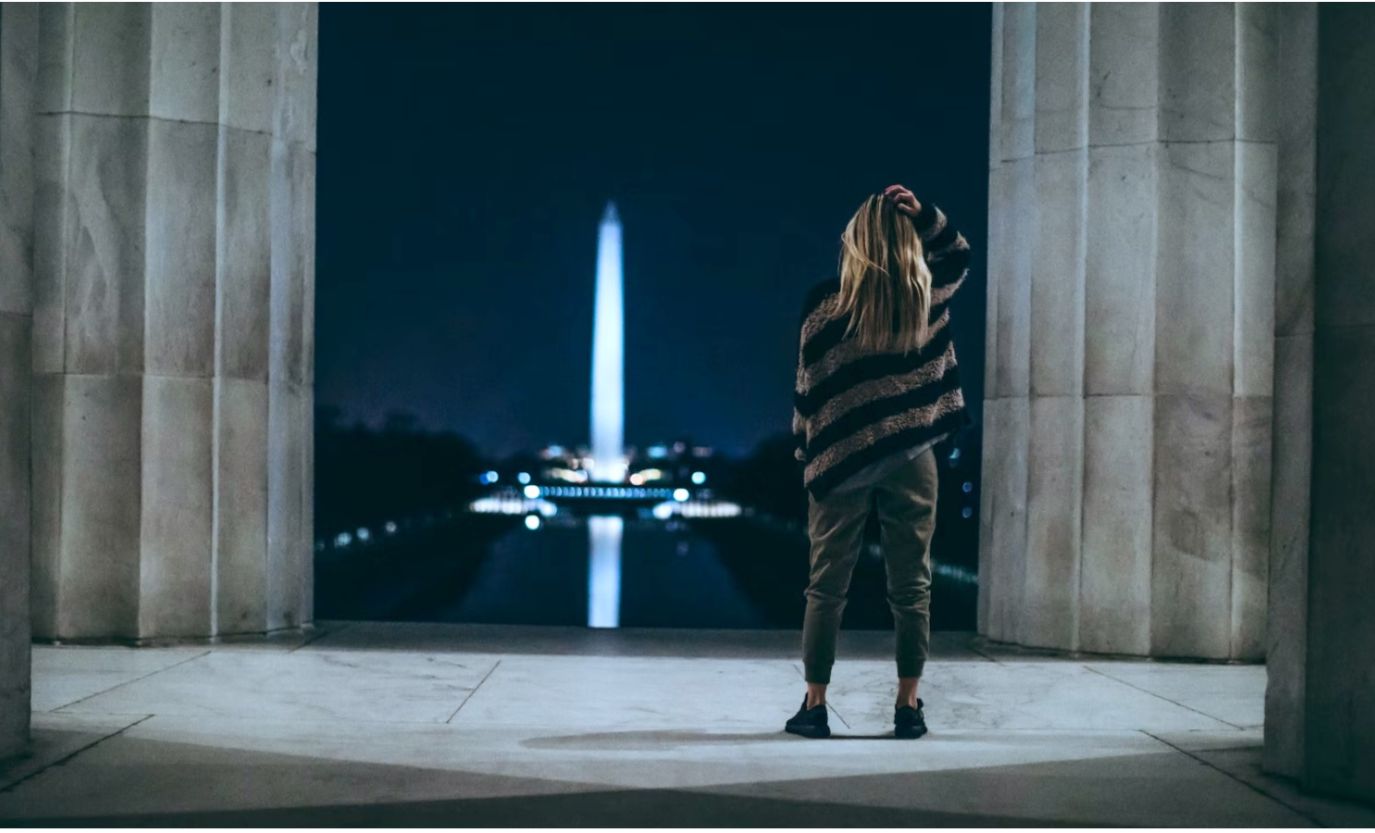 Meanwhile in North Texas, thousands of discrepant votes were also found in Dallas County, but the problems are of course several magnitudes larger in Harris County down south, where complaints made by GOP leaders there have finally paid off with the publication of the Texas Secretary of State report on Monday.

By contrast, the Republican-leaning Collin and Tarrant counties – also in North Texas in the same metropolitan region fared better than Dallas County when it came to elections discipline. Still, the loss of Tarrant County to the Biden-Kamala team in 2020 puzzled the general public, and no wonder: procedural ill-discipline was detected there as well. The State Government report on Monday quipped that there had been “zero tape” (zero report) problems in Tarrant. A zero tape is what you ask voting machines to print when you want to check if they’re empty before polling stations open.

The Secretary of State is displeased that there had been elections personnel who did not print zero tapes before stations opened. By right those machines should have been excluded immediately, but no exclusions were made.

The case for an elimination of all machines from future voting procedures grows ever more sensible with each election cycle. Not all things modern are necessarily useful, and the situation of voting machines and their inherent vulnerability has put American democracy at risk. There is no way to build an “unsinkable ship,” so to speak, in regards of information technology and its disjointedness from pen and paper and flesh and blood.

Harris County and the republic for which it stands can only be saved by falling back to a total reliance on paper trails and verified identities, and people showing up to vote.

Christmas is Upon Us