As a part of the ongoing culture-war that postmodernism has been waging against objectivity and absolute truth, nothing has contributed as significantly as the incoherent assertion that psychology is a science.

Psychology and its intellectual relatives such as sociology, gender studies, etc. offer virtually no utility in any objective sense. Thus, they have had no choice but to dismiss objectivity and fully embrace a subjective conceptual framework in how they view events and phenomenon. Since science is the epitome of an objective conceptual framework it has become the goal of post-modernists academics (psychologists) to replace all forms of actual science and its applications with their propaganda. They have done this by attempting to rewrite the definition of what is “Science” to suit their needs as they metastasize their way through every aspect of our education system: from pre-k to higher ed.

Science is the study of the natural world using the scientific method. It is non-authoritarian, unbiased, potentially falsifiable, and operates under a consensus among other scientists.

Through these efforts we have been able to establish models that explain the data and are not refuted by it. We call these models theories, and the more a theory makes predictions the more serious we take it. I accept very radical ideas such as spacetime curvature or plate tectonics because it allows us to make predictions and move forward.

If you have something that can describe your data set, but not explain it, you have a law. Such as Newtons laws of motion describing the motion of objects but not offering any mechanistic explanation, the latter of which wouldn’t come until Einstein’s General Relativity was able to account for the observed motion of mercury, among other things.

If you have a prediction based off an observation, you have a hypothesis. If you can test that hypothesis with an experiment and get constant replicable results, you have a verified hypothesis which will go on to formulate stronger foundations in understanding. If this hypothesis works around what is perceived as a paradox, you have discovered something very fundamental.

Given that verifying a hypothesis revolves around replicating experimental results, one must use objective metrics and well controlled experimental variables to properly draw a conclusion. It is very easy to make a mistake and draw the wrong conclusion, even under well controlled conditions, there is often a lurking variable that has gone unaccounted for. For example, many genetic diseases and anomalies once thought to have been caused by changes in amino acid sequence were actually due to changes in how the RNA was processed. This is not obvious conclusion that one can draw, even utilizing genetically identical cell cultures.

The essentialism of having objective metrics and well controlled experimental design falls apart completely when you look at how psychology and other social sciences operate. One metric often utilized by psychologists and sociologist is a survey, often asking individuals how they “feel”, which, as pointed out by Dr. Alex Berezow in his LA times article on the subject, is not an objective metric. Another common technique utilized by psychologists is the functional magnetic resonance imaging (fMRI). This device works by monitoring blood flow through certain regions of the brain. Professor Sally Satel at Yale college of medicine has been quite keen to point out that fMRI studies say nothing about the type of electrical activity that happens there and what qualia of information can be inferred to have transmitted from an increase in blood flow. Additionally, there have been numerous reports of “bugs” in the fMRI software that analyzes the imaging data. 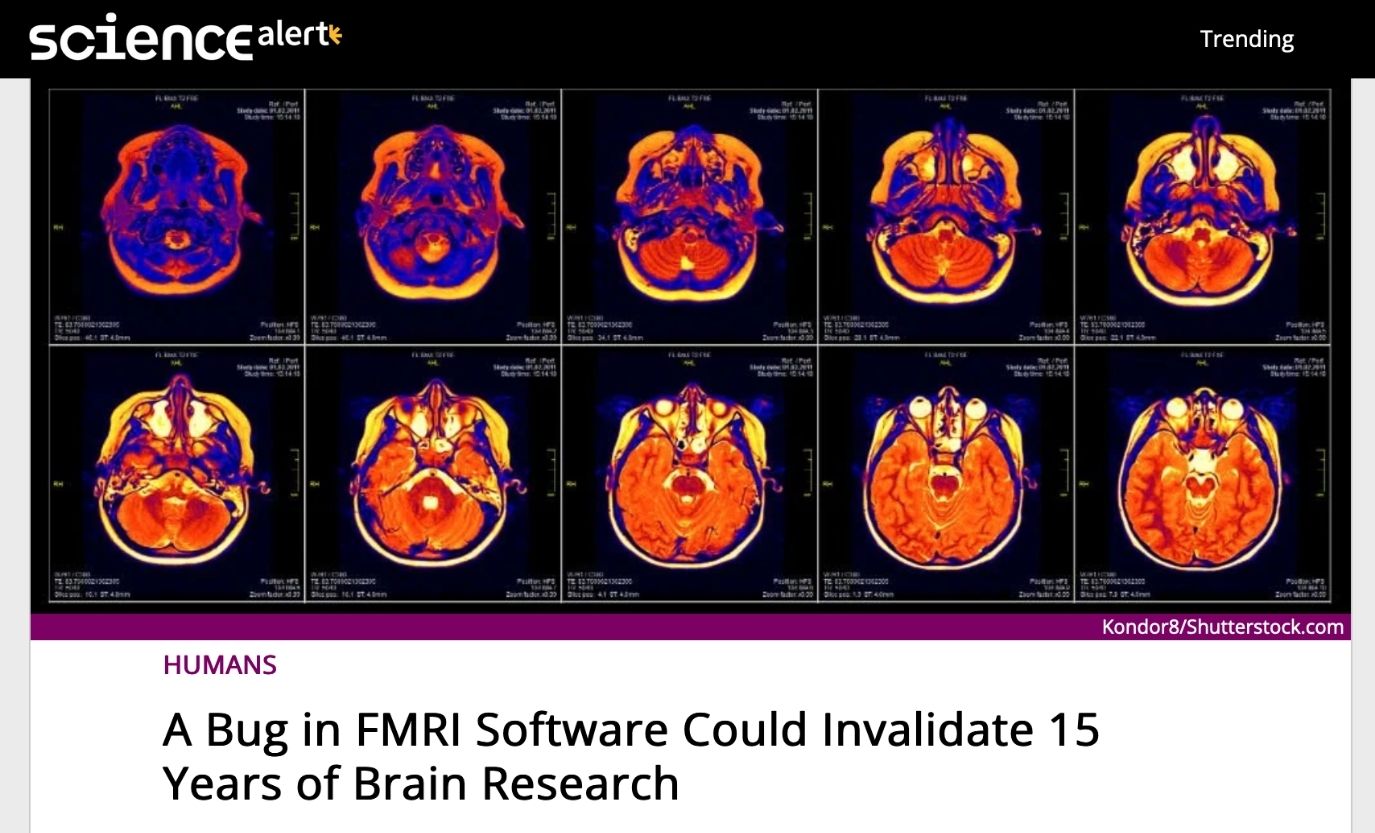 Some scientists have gone too far as to win an IgNoble prize for a funny demonstration that highlights how easy it can be to make a mistake with an fMRI machine and conclude that dead fish have significant brain activity when viewing images of people in social situations.

The failure to use objective metrics are just one aspect of psychology that causes it to fall short of the minimal requirements to be considered a science. They also fail to have well controlled experimental variables. As I wrote about previously, the stochastic nature of how epigenetics works can generate significant variation in phenotype. 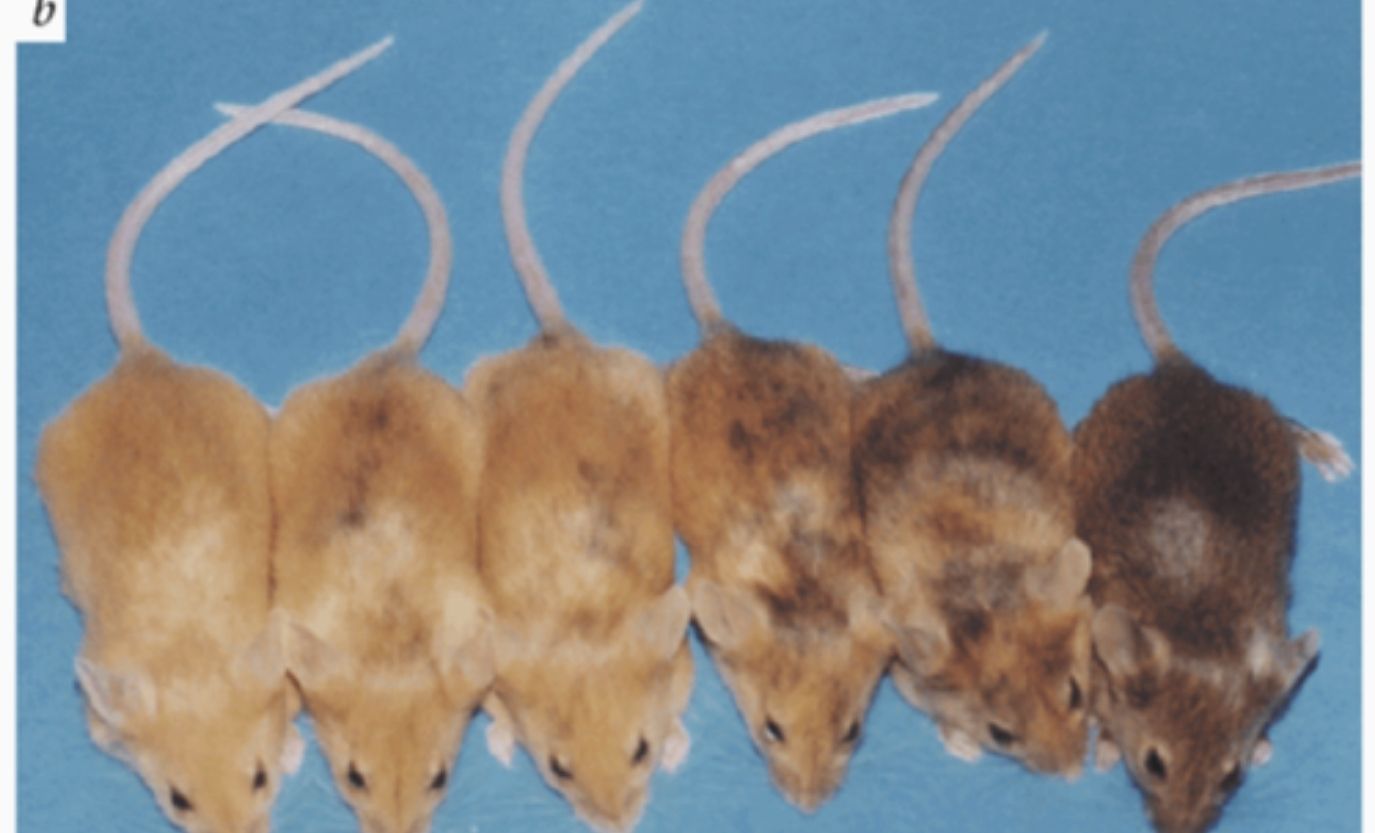 Image credit to Nature, hard to tell these are all genetically identical mice

If I struggled to draw a conclusion from genetically identical mice under well controlled settings, what credibility should we lend to researchers trying to do the same with genetically unique humans under non-controlled experimental settings.

Failure to have adequate experimental design results in failures of yet another critical component of the scientific method: replication. Which is often less than 50% for most publications in psychology. If your replication rate is less than that of a coin flip, I would not call what you do “Science”. 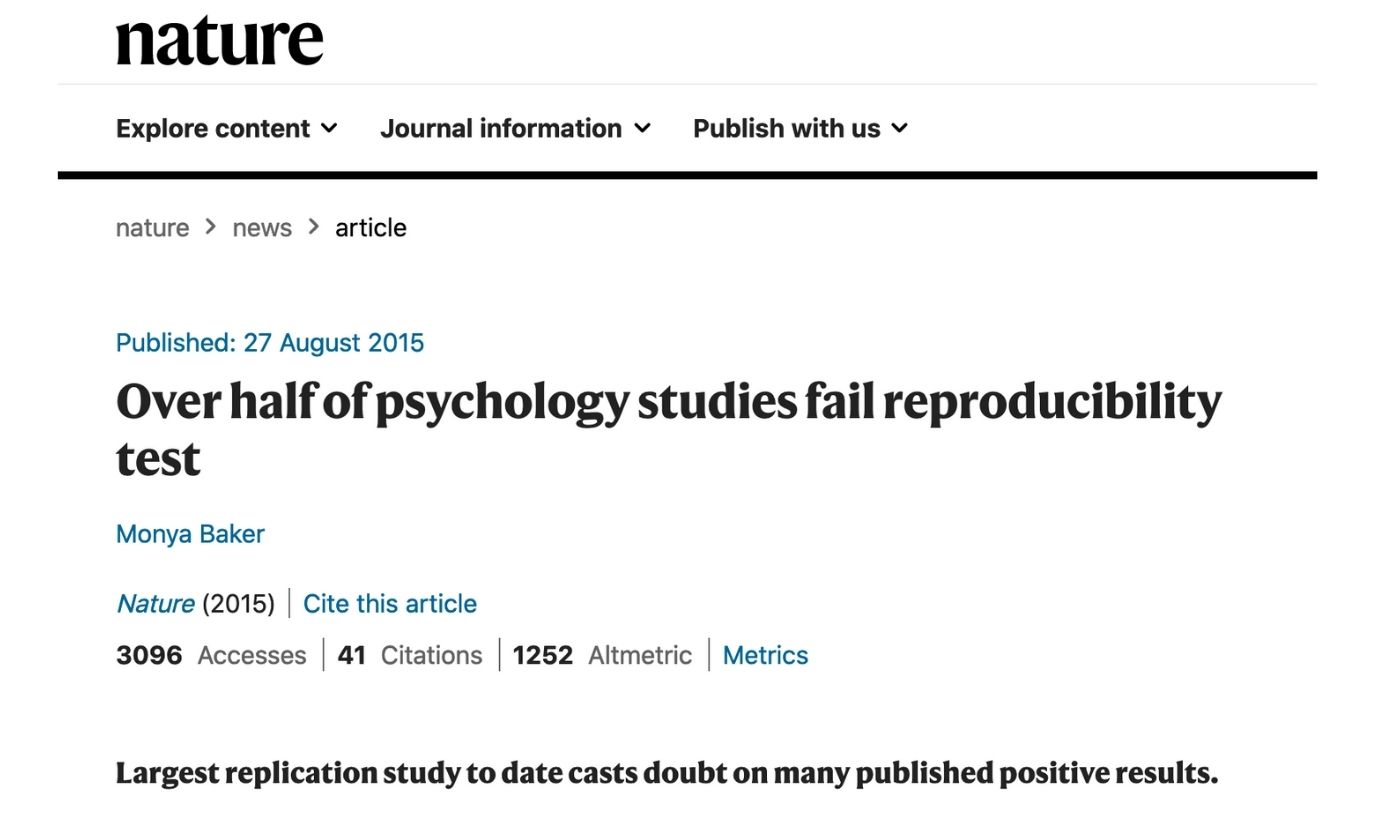 These mistakes are nothing new, when Copernicus and various other astronomers were trying to explain the motion of planets with a geocentric model (earth at the center of the solar system), they developed a set of mathematical expressions that outlined the movement of planets called Epicycles. Epicycles not only matched with the observed retrograde movement of planets in the night sky, but they also can be used to approximate Kepler’s Second law. However, this assertion was inaccurate. Their mathematics was right, but their science (physics) was wrong. Later, after multiple inquisitions, and a few arrests, the heliocentric model was accepted as the most accurate model to explain planetary motion in our solar system.

The reason I mention Epicycles is that in absence of a strong Theoretical framework (Newtonian Mechanics and General Relativity) you cannot adequately explain your data, nor can you draw meaningful conclusions. Psychology has, and will continue to, been grasping at straws trying to (not even succeeding in) create their own epicycles instead of discovering laws and theories.

Since psychology lacks any laws or theories to explain data, it must rely overtly on authoritarian agencies to tell them how and what to think. Which violates the declaration that science be non-authoritarian. When Galileo asserted that the earth was not the center of the solar system, he did not do so out of his own opinion nor out of a fear of being “cancelled”, he did it from contemplating his own observations regarding the motion of the planets. Charles Darwin did not develop the Theory of Natural Selection courtesy of social or financial pressures to do so, he drew his conclusion from multiple observations in the Galapagos.

Without a theory or law to guide you through the data one can draw a conclusion almost as equally ridiculous as the assertion that the earth is the center of the solar system. However, given the close ties that psychology has to medicine, these errors can be catastrophic and harmful in ways that make the Roman inquisition look like a medspa. For example, the American Psychiatric Association insists that Pedophilia is not a mental disorder. This was not a conclusion made by some lone psychologist or psychiatrist working away on a law or theory to explain or describe his data. This was purely the opinion of an authoritative agency. 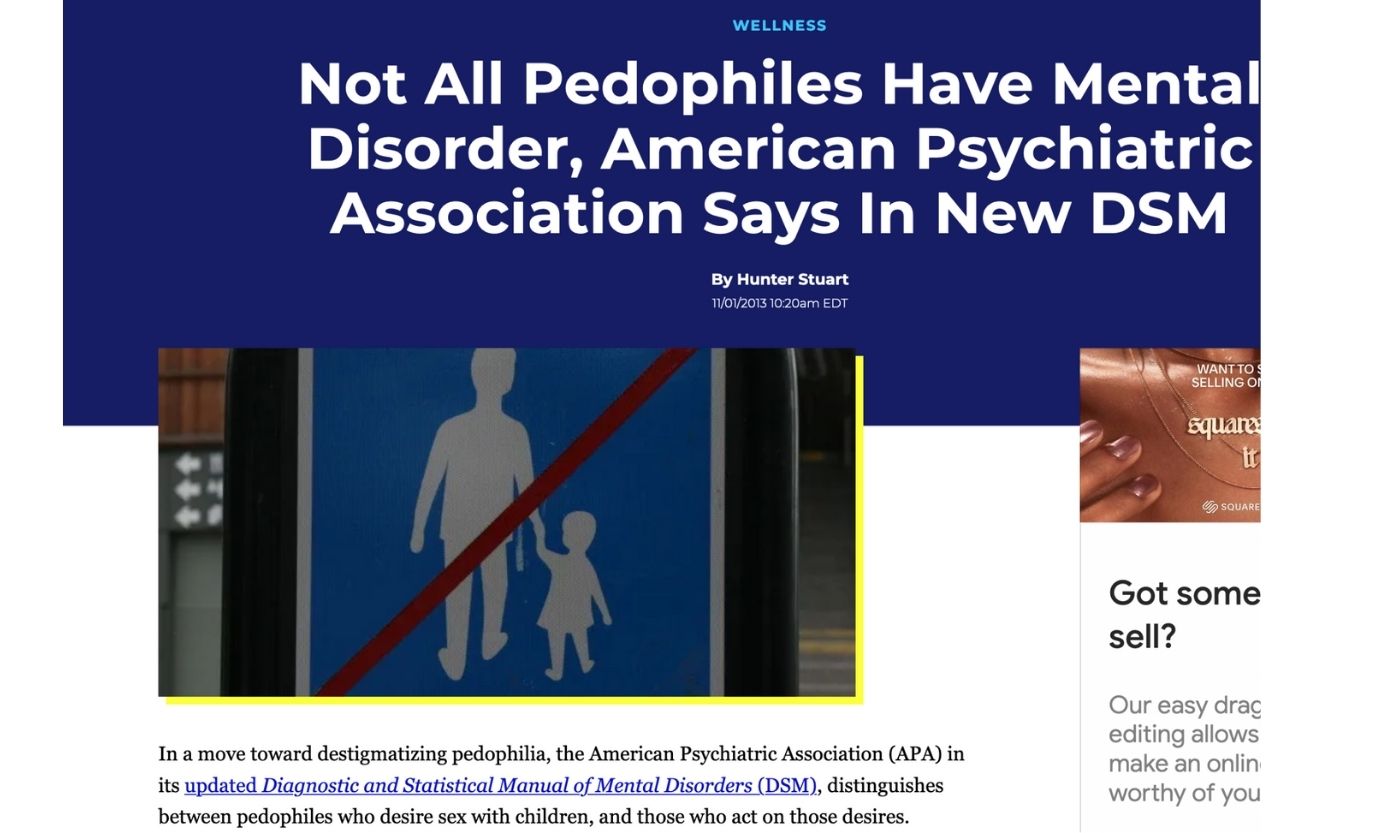 Image credit to Washington Post: without a Law or Theory you can reach erroneous and harmful conclusions.

As pointed out by others, postmodernist institutions such as modern academia are trying very hard to normalize pedophilia and ignore the harm it does to children. Psychology being one of their most powerful tools for doing so.

The field is also rife with bias from financial incentives. Up to 70% of the DSM task force members (the authoritative agency which determines what is and what is not a mental disorder) report having financial ties to pharmaceutical companies.

Very bad things happen when we masquerade one thing as something it is not, we need to stop calling psychology a science and acknowledge it for what it is: subjective studies that don’t comply with the scientific method. While they can be utilized to show interesting aspects of human behavior, we should take everything they assert with a grain of salt, and not allow them to keep a stranglehold on education, medicine, and social services. 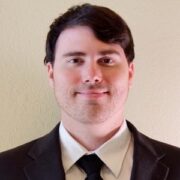 Why Participate in Lent?