As flights reopen sporadically all over the world, Caucasians begin to reach for tropical destinations, among them Malaysia. But, a hidden, thinly veiled anti-Western hatred simmers beneath the surface in the Muslim Malay community. If you’re Republican and pro-Jewish, you can be marked for death and murdered in modern Malaysia—the world’s most comprehensively advanced Muslim-majority nation, higher in indices than the UAE.

Why have Muslim Malay individuals begun threatening me on WhatsApp without obscuring who they are? All cellular phone numbers in Malaysia are nationally registered to actual individuals with ID cards. There are no throwaway phones, nor temporary chips in the cellular networks. Therefore, radical Islamists are boldly launching their offensives, with an assumption that the Jewish universe has somehow abandoned me and the Ong family.

The aforementioned Jewish universe includes organizations such as the Jewish Forward and Amcha Initiative. They and many Jewish associations have remained silent, even when they do understand that a major Jewish charity Lev LaLev has swindled a simple Chinese diaspora family of nearly a quarter million ringgit (USD55,000).

Terror operatives in Malaysia are emboldened and encouraged by this phenomenon of Lev LaLev’s deceit and the resulting Jewish silence. For upwards of twenty days, the Ong family has lived in utter and indescribable fear, for the radical Islamists make their intentions clear by way of direct incoming calls—not just SMS, WhatsApp, and email. The syntax they use on the phone is well-coached and colloquial as well, reflective of Fatah, Keadilan, and Pribumi training. 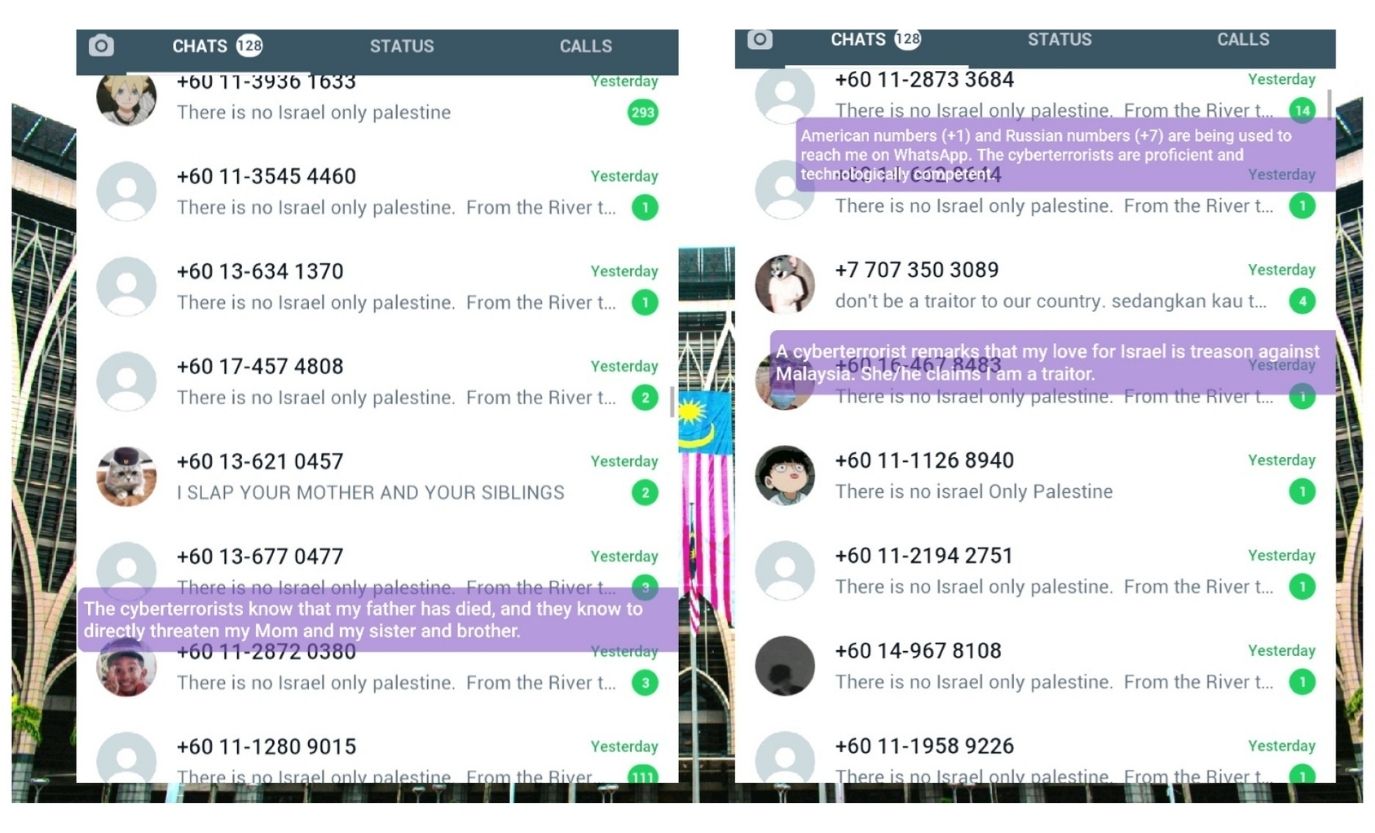 There is a real Jewish orphanage at 9, Bene Yissakhar Street, Kiryat Sanz 42447, Netanya 4244904, Israel, known as the House of Hope (the Donald Berman Rubin Zeffren Bayit vTikva House of Hope), but it is not Lev LaLev at all. Despite claims, there is no “Lev LaLev Girls’ Orphanage,” nor a “Lev LaLev Children’s Home.”

When Lev LaLev’s Chavi Weiss reached out to me many times, it was for three Jewish weddings, a pet center, and excursions for Jewish girls. I agreed excitedly to all the projects, because my Arab wife had recently ditched me, and my heart felt torn in two. It could only be mended by tremendous giving to Jewish youth, and gave I did—keenly, joyously, exuberantly.

But those miracles Lev LaLev claimed to be working on cannot possibly exist. There is no Lev LaLev Girls’ Orphanage. Instead, Weiss was using the House of Hope campus, and filming it and portraying it as the home of “Lev LaLev girls.” But the girls are House of Hope girls! 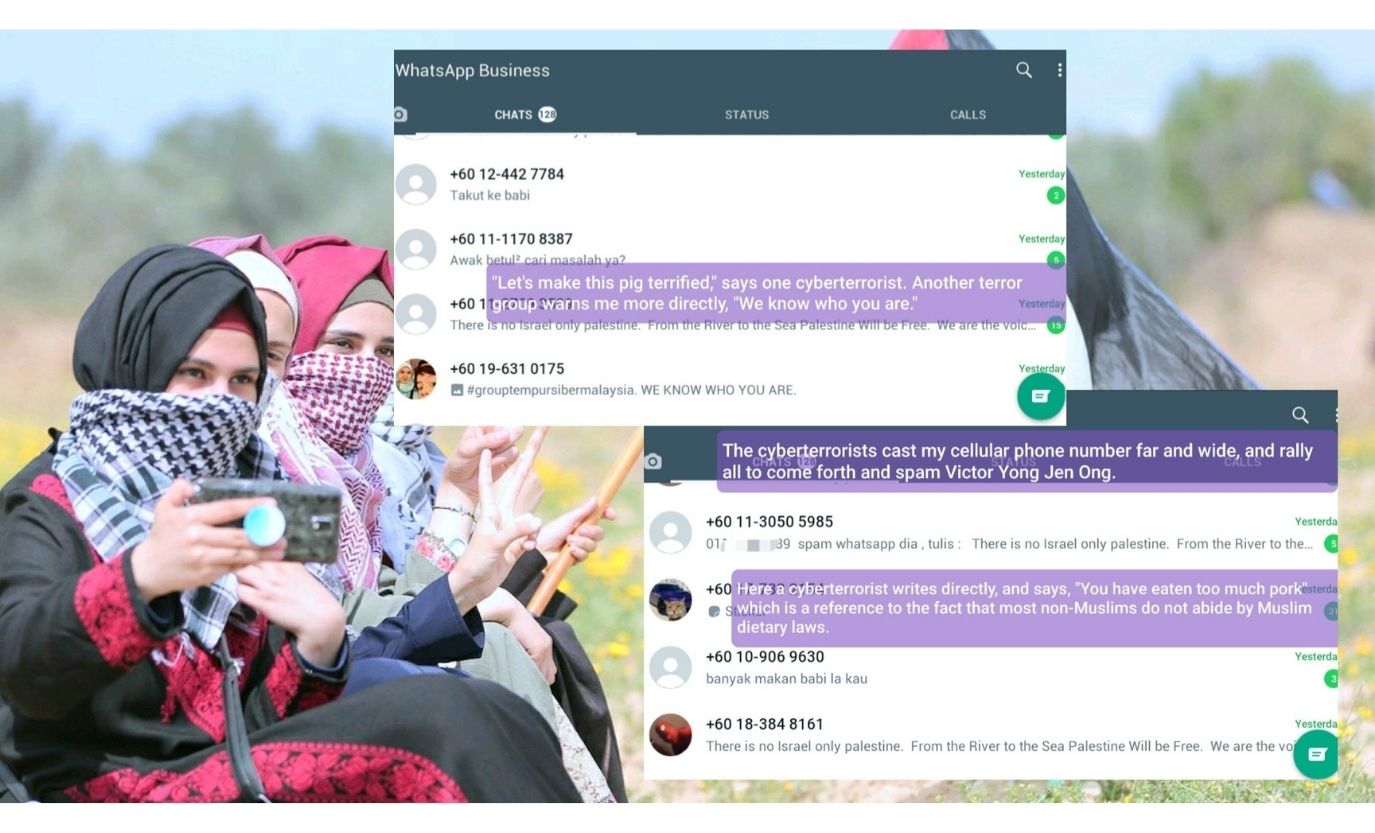 Due to the lack of an actual orphanage site, Lev LaLev feeds no girls, has no way to build a pet center, and sends no Jewish child to school.

Therefore, there is no USD30,000 pet center at the House of Hope, no beautiful 15,000-dollar wedding for a Jewish girl and her lucky husband, and thousands of American dollars also never made it to excursions and learning activities. Lev LaLev merely films the amenities and facilities of the House of Hope, and advances these as ‘proofs’ of a Lev LaLev Children’s Home.

This is misrepresentation of the most deceitful kind, for it qualifies as international financial crime—but the lack of an Israeli Embassy in Malaysia has meant that Lev LaLev can seemingly escape the arm of the law, for that is such a short arm indeed. The absence of diplomatic links between Malaysia and Israel has doomed Asiatic donors in Malaysia who helped Lev LaLev, under the impression that the Lev LaLev entity is a girls’ home.

Asiatic donors who are pro-Israel like this face persecution and imminent death in Malaysia this year, for Lev LaLev’s deceit is exposed, but Jewish response has been horrifyingly slow. The lack of public Jewish outcry has given off the impression that the Jewish world does not care if fans and allies of Israel are conned or swindled by members of the Jewish race.

This Jewish silence abandons the fans and allies of Israel, and leaves them without Jewish friends. Such a state is a marooned and vulnerable one. These innocent folks are now easy targets for elimination, and the radical Arabs and extremist Malays move in on them. 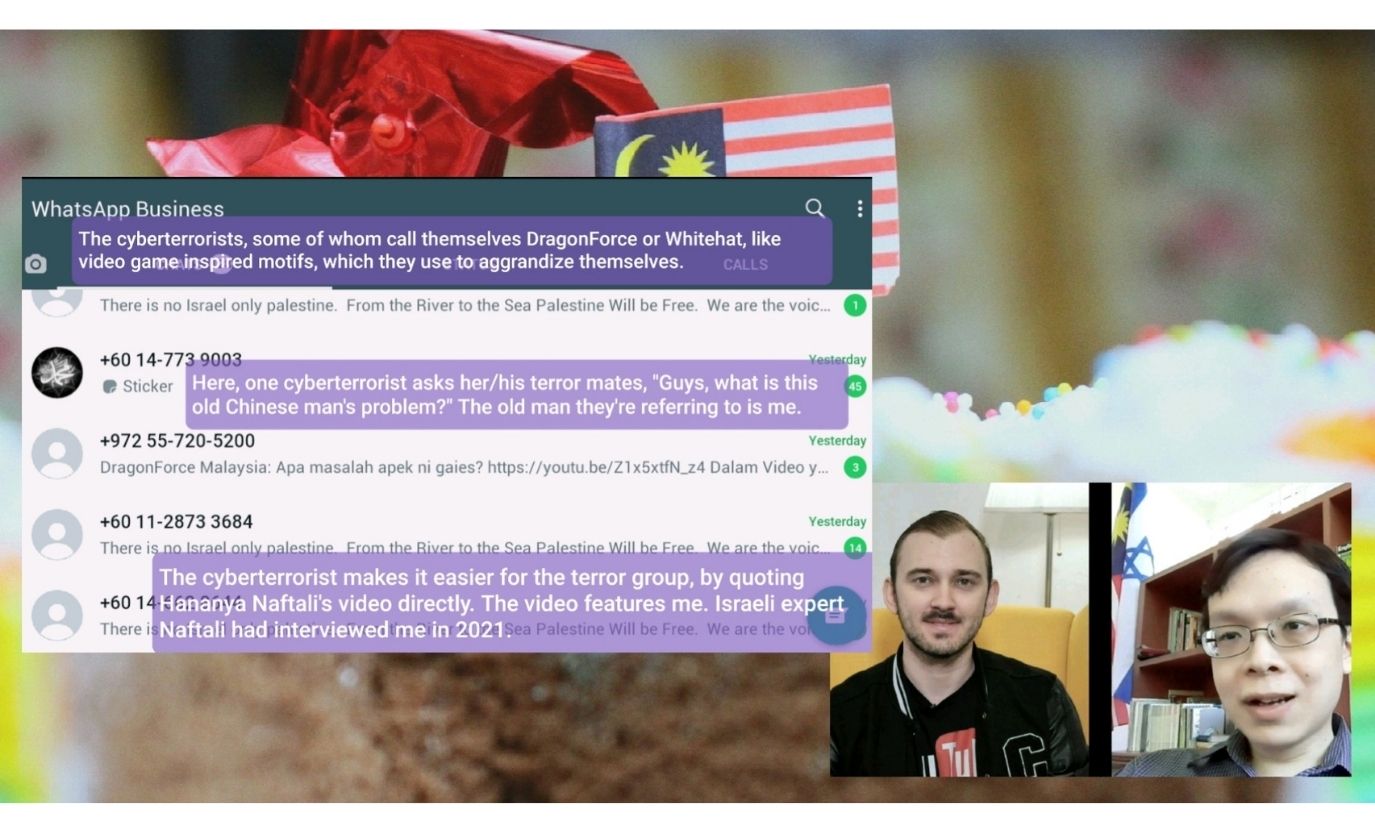 PALESTINE STRIKES US WHILE WE’RE WEAK

More than a decade ago, I was a teenager at the Singapore Polytechnic, scrutinizing the way wood trusses worked, and drafting briefs for project bidding.

It was the simplest of times, and I crossed the Causeway between Singapore and Johor Bahru City six hundred times each year. Pre-Covid, it was the busiest border crossing in the world.

In spite of all the labors and savings of the Ong family in setting monies aside and prepping for the proverbial rainy days, love and devotion lead us to divest of ourselves regularly for the most honorable of causes. We gave our most, to Zionistic purposes, and our largest sacrifice was made for Lev LaLev’s sake. This is precisely why we have reported to the World Zionist Organization recently, to tell them of how scarred we are by the egregious deceit of Lev LaLev.

Most of the working class, also known as low and middle income earners, suffer in this global pandemic, and our coping strategy has been to help one another, so as to tide through this crisis. Only leftists smash, loot, steal, or pilfer. Tragically there are bad people who are well to do, but steal, con, and scam nonetheless, in order to amass monies for concealed and unjustifiable usages.

Will the trickle of correspondences between the Ongs and a handful of rabbis and leaders in Canada, Israel, and America be enough? Time has run out, for the highly-educated terror syndicates in Malaysia prefer to strike us now while the iron is hot and while Jewish voice is less than apparent. What ‘strike’ means is more literal than figurative. It means to kill us, i.e. to kill the Ong family, or spray us with acid, the latter being a famous Palestine modus operandi in urban Malaysia.

Why is there even Jewish silence in the first place? A lot of it has to do with disbelief: ‘we Jews do not con folks.’ This pride has only doomed the victims further. This mishandling of bona fide cases is in itself a ‘shonda,’ a Jewish word meaning ‘ethnic shame.’ Lev LaLev’s deceit is a shonda, and the refusal of many Jewish organizations to recognize this and answer for this is, by all counts, an additional shonda as well. 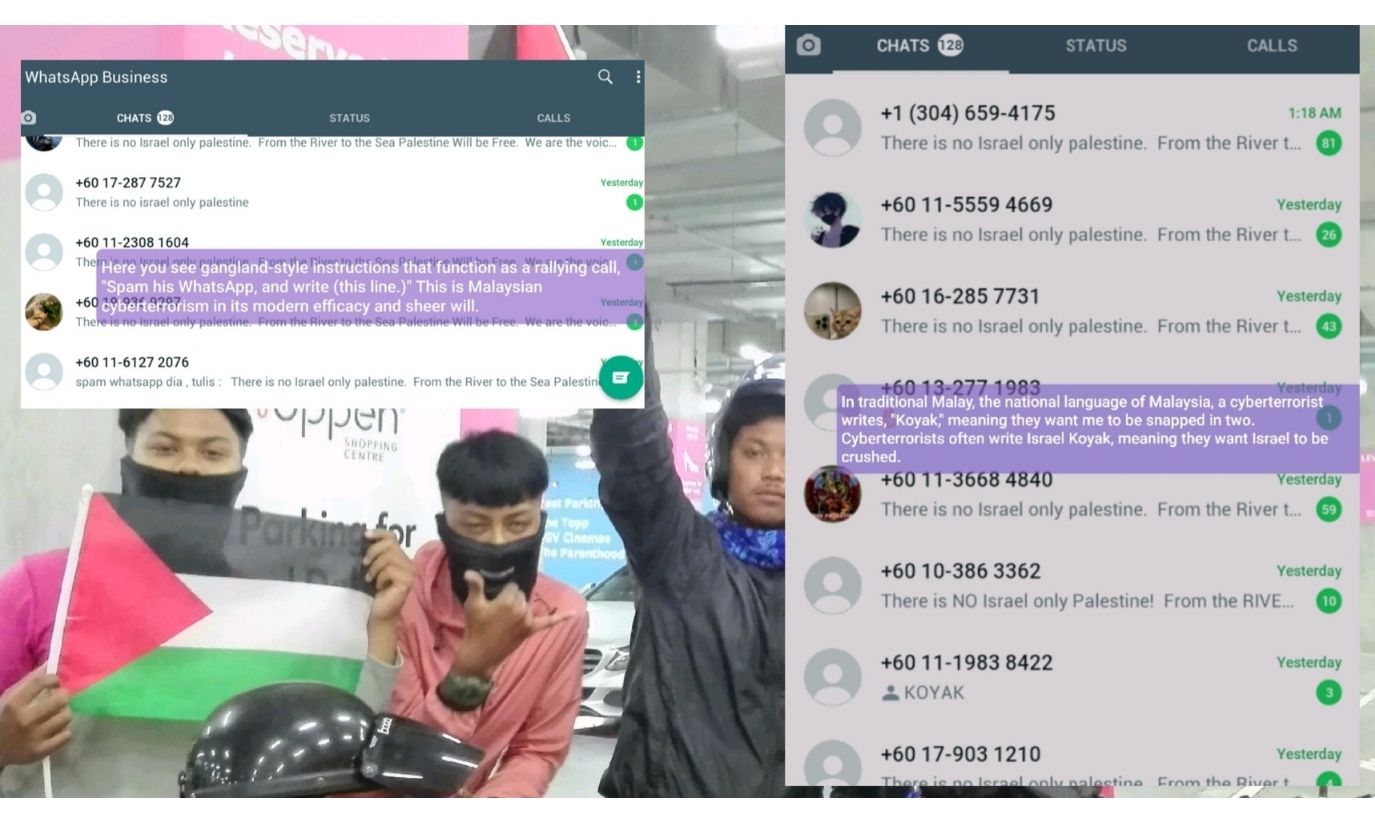 MALAYSIA-ISRAEL RELATIONS AS A FORM OF POLICING

Anwar Ibrahim and Dr. Mahathir Mohamad lead the Fatah and Hamas movements in Malaysia, which are heavily financed by Iran as well as the European Union and United Nations funding. These localized movements in Malaysia have a cacophony of names, and that can sometimes be overwhelming. At the UN level, there is yet one more legitimizing name: the State of Palestine, which summarizes all global antisemitic efforts. It is devilishly grand, the way evil always looks so organized, forceful, and professional.

The next time you think to visit Malaysia and write your phone number at a hotel front desk, be aware of how pro-Palestine operatives can fanatically dial your number 16 times from 12 different numbers in the space of, say, a half hour in any random afternoon. Be aware of how they can use your number to triangulate your roaming location while you’re in Malaysia, and the smarts they have in using your number to gain access to your Amazon, Facebook, and WhatsApp by way of soft hack. The terrorists of this age are cyberterrorists first, suicide bombers last.

While it is poignant to think on these communists and radical Muslims, and bemoan Malaysia’s cybercrime landscape, the Muslim Malay community is genetically non-Arab and non-Iranian, and therefore a broad section of Muslim Malays wants a realigned Malaysia that is pro-Western, pro-Republican, and pro-life (which extends to both womb life and antiterror). The Muslim Malays and Malaysian Chinese need a UAE miracle in Malaysia—one that welcomes an Israeli Jewish embassy, and such a thing will secure Arab livelihoods as well, and help root out deviant Jewish criminals such as Lev LaLev.

International financial crimes go beyond national borders. An Embassy of Israel in Malaysia, and an Embassy of Malaysia in Israel—these institutions can help solve crises such as the Lev LaLev scam. Security for fans and friends of Israel, growth opportunities for Israeli businesses and Malaysian enterprise, and policing of bad behavior in both Israel and Malaysia: these are the best justifications for Malaysia-Israel diplomatic links.

At press time, officials of the World Zionist Organization and other pan-Jewish associations have begun to assess the nature of the Lev LaLev scam, and expressed dismay at the unusual deceit and level of sophistication present in this crime. For updates on the Lev LaLev scam, its effects on victims, and the Jewish response, go to www.chinachoosesisrael.org/blog

Learning a New Sport is a Lesson in Humility