Mary Ellen Cuzela, a substitute teacher who has lived in Katy for 22 years and is the parent of three teenagers who have attended Katy schools, got to find out what it’s like, though. And she wasn’t a fan of the agenda that seemed obvious in the line of questioning.

“I felt like the reporter was asking the same questions in a number of different ways because I wouldn’t give her the answer she was seeking,” said Cuzela after her Wednesday interview with Antonia Hylton of NBC Nightly News with Lester Holt.

So how did this all get started? Two months ago, we ran an article about Katy ISD’s library program and parents protesting the books available to their children. At the center of their fight was a school board meeting in which parents stepped up to read excerpts from the books available to children at the middle and high school levels. The books were later deemed inappropriate and removed for a full review. Similar protests are happening across the nation as parents argue for greater transparency within the public school curriculum and in the library book offerings. 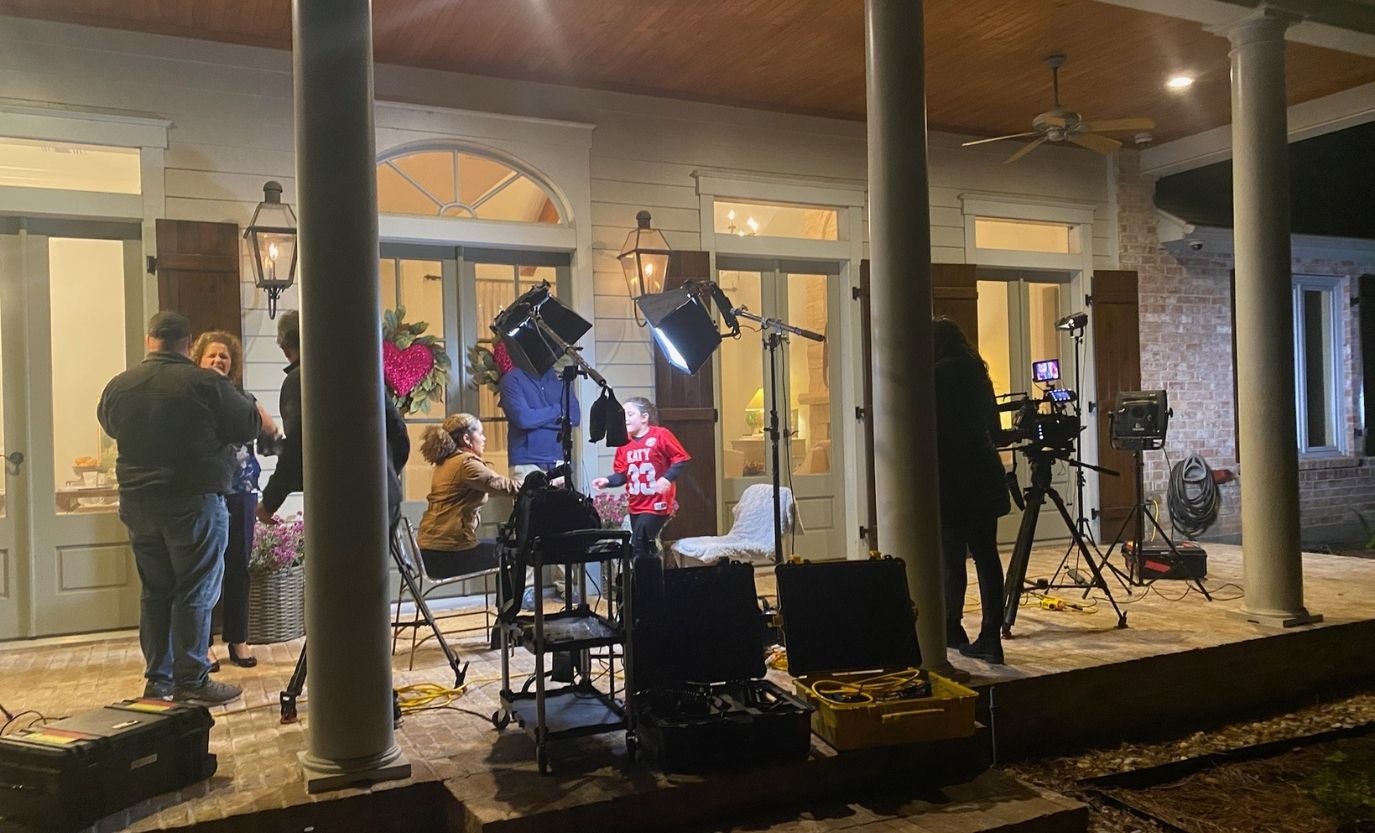 Fast forward to two weeks ago when Cuzela was contacted by NBC reporter Mike Hixenbaugh, who had found her on Facebook and reached out through Messenger to see if she would be open to a phone interview. “He explained that he had watched the YouTube video of the Katy ISD board meeting,” Cuzela recounted. “I had been the first reader that night and had read excerpts from Me, Earl, and the Dying Girl, which was highly obscene. Hixenbaugh explained that they are speaking to people on all sides of the issue, including librarians who support the removal of these books, and some who don’t.”

Cuzela agreed to talk to him, and they set up a phone interview. During that conversation, Cuzela noted that Hixenbaugh asked her questions regarding her thoughts on the availability of materials for teens identifying as LGBTQ+. “I answered that there might be other books without vulgarity that they could use, and I stressed that homosexuality is not what it’s about. Then he asked how I would feel if these teens felt excluded or disregarded, and I responded that I’d feel sad.”

As the conversation wrapped up, Hixenbaugh asked Cuzela if she would be open to an on-camera interview. She initially hesitated, then agreed. She explained, “I didn’t want the other sides to be represented and not our side. I didn’t know until after I was interviewed where it would be aired, but I’d decided that I need to be open to talk to anyone.”

In preparation for the interview, producers from New York called to solicit her help to set up a location. Then they asked her if she was comfortable sharing her vaccination status. She replied no, that it was private information. She was then informed that unless she and the reporter wanted to conduct the interview wearing masks, they would need to hold the interview outdoors.

Concerned about the visibility of street addresses, safety, and privacy issues, Cuzela suggested the use of a friend’s property at a more remote location that couldn’t easily be tracked. Despite the cold weather, they conducted the interview on the front porch with crew members from both New York and Texas.

Cuzela described the experience. “It was interesting. Hylton was very cordial before filming. Once the cameras started rolling, however, her countenance changed, and I definitely detected an angle in her questioning. She effectively asked the same question in several different ways. It was like I wasn’t giving her what she wanted, so she kept prodding, hoping I would take the bait.” 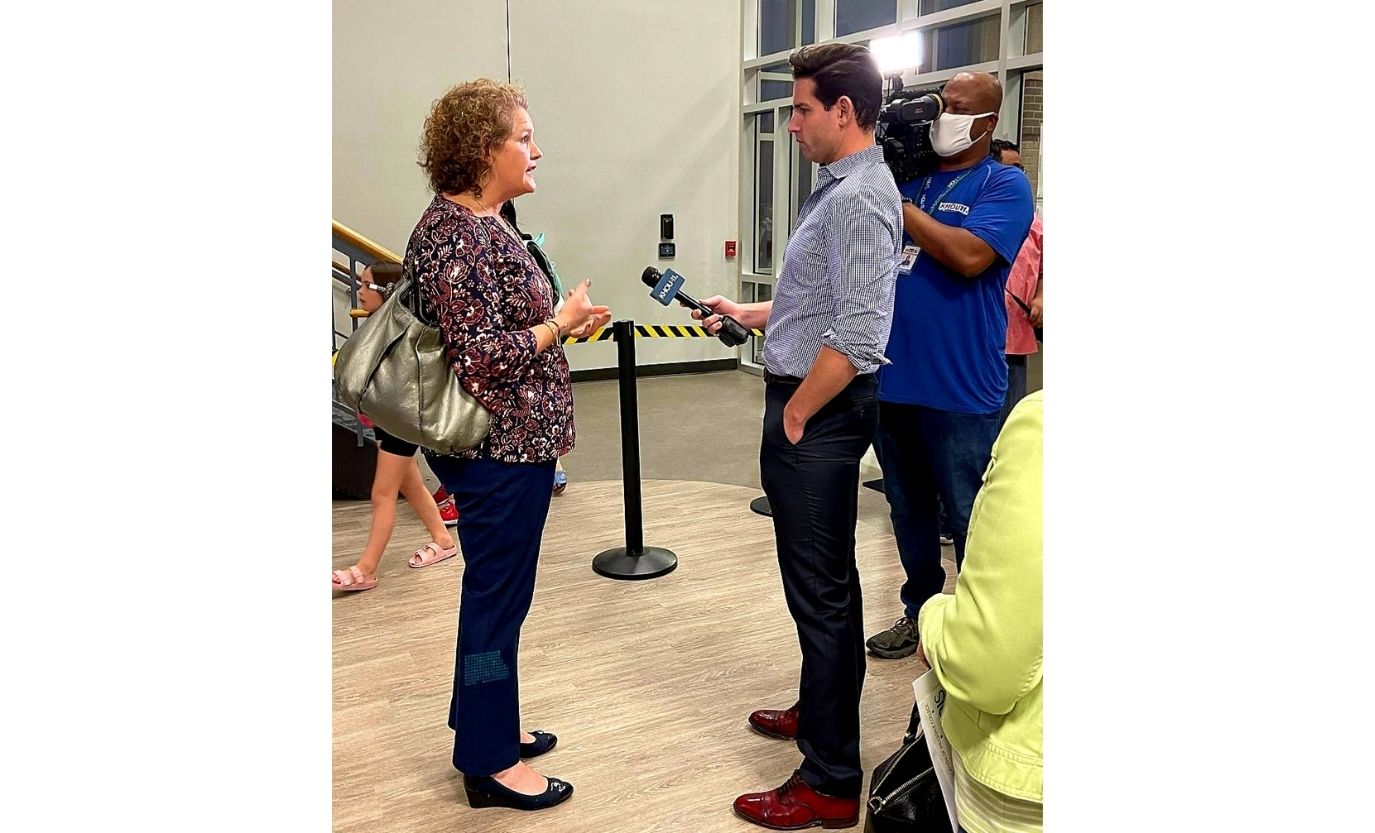 Cuzela speaking to a local news reporter after the board meeting on Nov 15, 2021.

Cuzela says the predominate question was, “Who are you to decide what’s appropriate for all people at a public school?” followed by “Do you personally know any homosexuals and are you familiar with their lives?”

“I kept repeating, ‘This is not what it’s about at all. This is about vulgar content not appropriate for any child. It’s inappropriate for everyone.”

Hylton continued to push, repeatedly circling back to that line of questioning. “This seems to be the path taken after the school board video came out,” Cuzela said, reflecting on the media focus on the censorship of LGBT+ books. “It’s a strategy or tactic to focus on the homosexual angle, rather than the pornography or language or overall inappropriateness of these books.”

When given the opportunity to add anything at the end of the interview, Cuzela took the chance to drive home her points and clarify her position. “Two things I said to her at the end: First, none of what we read at that school board meeting could be aired on the 10:00 news or on the radio. If it’s not appropriate there, how is it appropriate for children? Second, at our school board meeting, a person who identified as gay stood up and stated, ‘I would like to see the gay community stand with the straight community to keep this type of content out of our schools.’”

Cuzela feels that the media is deliberately muddying the waters, clumping pornography together with the LGBTQ+ community, an insult itself. “We are all oversexualized and its unnecessary. We all have dignity. We all need to protect our children. I asked this reporter, ‘Do you think someone who identifies as LGBTQ+ is only about their sexuality? These are people! Graphic, detailed, perverse sex is not appropriate for any child, regardless of their sexuality.’”

America’s Crumbling Bridges, can we Save Ourselves?