When Father Paul Wehner was growing up in the Episcopal Church, he could imagine himself as the priest. But, as he grew, he felt overwhelmed by feelings of unworthiness. Why would God choose him to be His representative? 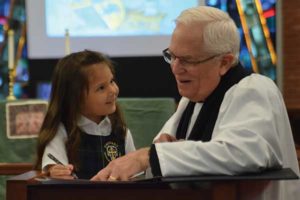 So, years went by and he became a successful business man, married and raised a family. But his connection to the church never left his heart or his mind, and decades later when he was on assignment in Singapore, he finally felt God’s calling to the clergy.

“Our time in Singapore allowed me to look at myself in a different light,” Father Paul said. “I was no longer so tied to my identity back in the States.”

He became a lay leader in the church he attended overseas, and before he knew it he was the senior warden, acting as a spokesperson for the congregation in the absence of the priest.

“I worked very closely with the priest in encouragement and other interventions by the Holy Spirit which finally brought me to the conclusion that this was something I was called to do.”

But, although the future Rector felt led to become a leader of the Episcopal Church, he would have to gain permission from the bishop in order to begin seminary.

“I began that process in Singapore with the bishop of Singapore,” he said. “It was pretty different than the way it happens in the States. It was not nearly as formal. It was Saturday morning meetings at the bishop’s palace with six or seven other Singaporeans. I kind of stood out.” 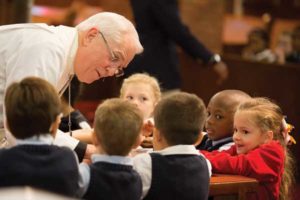 As soon as Father Paul returned to the states, he was given permission to begin his seminary training. He began his schooling in 1998, and spent the next three years gaining the knowledge he’d need to lead a congregation.

When he was finished with his training, he was placed at a church in Beaumont where he spent two and a half years, culminating in a culmination in a call to be the Rector of Grace Episcopal Church in Galveston.

“Rector implies that the church is self-sufficient and that you are the priest in charge,” he said.

Eight years later, in 2011, a search committee from Calvary Episcopal Church in Richmond invited him to come there.

“It was a brave committee to ignore my age and invite me to come,” Father Paul said. “I knew it was where God wanted me to be.”

Although he was confident that he was in the right place, Father Paul knew that becoming Calvary’s Rector would mean a lot more responsibility. Not only does he oversee two services on Sunday mornings and help with day-to-day activities of the church, he is also the chairman of the board of Calvary Episcopal Preparatory.

“There are 200 kids on our campus here,” he said. “I make sure I walk through the halls and the kids all know who I am. I’m responsible for their Christian education.”

Father Paul said Calvary’s school is one of the missions into the community that is directed towards the future. But the school isn’t the only way the Rector and his church make a difference in the surrounding area.

“One or sometimes two weekdays a month, people of the community who are in need come in and meet with one of the ministers and tell their story, are listened to, and prayed for. Then, hopefully we can do something that helps them to some extent,” he said.

The church also has partnerships with Friends of North Richmond, Attack Poverty, and serves alongside St. Lawrence Catholic Church in building homes for needy families through the Habitat for Humanity program.

The Rector said creating relationships with other churches in the area is essential to the church’s mission to be a ‘good neighbor.’ 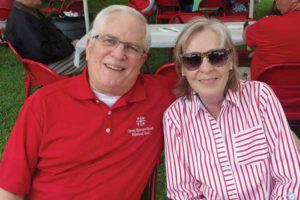 This means helping tend a community garden with First Baptist Church of Richmond, taking over the entire Fort Bend County Meals on Wheels program on Thanksgiving Day each year, and participating in the Adopt a Family program at Christmas time.

“One of the things that’s most fulfilling is the relationship we have with the elementary school across the street,” Father Paul said. “We have a mentoring program where our members meet with children one time a week for 45 minutes.”

The program has allowed the church to come in and volunteer and even bring treats for the teachers. The church members have also donated books for the school’s reading recovery program that helps first graders continue their reading progress over the summer.

“We really do try to be good neighbors and participate in the community in a way that’s felt,” he said. “It’s not unique, but it’s important to us. It’s what we want our identity to be. We want to be known as a church with a big heart for others.”

Calvary Episcopal Church has more than 200 people who come to worship on Sunday mornings, with more than 40 members playing a role in the service. The church is at 806 Thompson Rd in Richmond and services are at 8 and 10:30 a.m.

Saved: How a Grizzly Attack Led to One Man’s Peace