Jim VanSteenhouse went hunting for moose and instead found himself in an up-close encounter with a grizzly bear. “You want to make God laugh? Tell him your plans,” a quote VanSteenhouse – “The Bear Man” – lived first hand. And now he shares his story around Texas and beyond to encourage men to evaluate their priorities and their relationship with God. 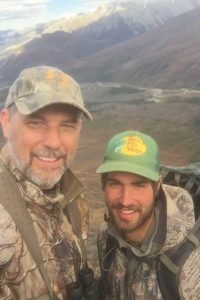 His true story is much more fantastic than fiction. It began in September, 2015, when Jim took off for a moose hunting adventure in the Northwest Territory of Canada. He was excited to hunt big game using his preferred method, a bow and arrow, in a highly remote area. Jim traveled by plane, float plane, and finally helicopter, where he was dropped into his hunting location with his young guide, Jordan.

On the first day, the men noticed giant grizzly paw prints in a soft embankment. The next day, Jim and Jordan spotted a grizzly along the tree line of a nearby ridge. That night, they hustled back to camp because, as Jordan explained, “When the sun goes down, we’re on the menu.” On the third day, Jim spotted a beautiful moose and the excitement for the hunt grew. He awoke on the fourth day to cold temperatures and piled on his clothes, ready to go after that moose. That day did not go as planned.

“I was sitting on a ridge with Jordan discussing how we were going to open a can of tuna, when I noticed Jordan’s stricken face. He was looking over my shoulder, white as a ghost. I slowly turned, and there was a grizzly, two to three yards away. I glanced back at Jordan to see if he had shouldered his gun, and that’s when I felt the bear on me. I remember covering my head with my hands and rolling into the fetal position. Then I felt the bones in my skull cracking, my fingers breaking, before the bear moved down my body. I felt myself being shaken like a rag doll in the bear’s jaws, and I figured I was a goner.” 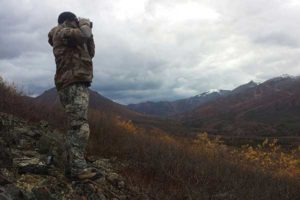 The grizzly had carried Jim 50 yards away and was about to go in for the kill when Jordan managed to fire the shot that stopped him. The next thing Jim remembers is thinking it must be raining, then realizing blood was pouring from his head. He inventoried his hands to find his fingers going in all directions, all of his bones broken. “Then I looked down at my body,” he said, “and it looked like I had been attacked by Edward Scissorhands. I was a shredded, bloody mess.”

Because of their remote location and the rescue effort required to get Jim to a city with a hospital, he had plenty of time to think during transport. “Forget about the fact that I was already in shock from the attack. The real anxiety came when I realized I would probably die and I had no idea whether I would actually go to heaven. I was panicking thinking that I wasn’t good enough, that this might truly be the end for me. That’s when I felt the Holy Spirit move inside of me and it was as if Jesus came down and sat in the back of the chopper with me, and said, ‘Look, you’ve accepted me as your Lord and Savior. You’ll never be adequate on your own. Your adequacy comes through me.’ It was as if someone covered me with a warm wool blanket. I’ve never felt peace like that. At that point, all anxiety was gone. I watched the mountains through the chopper window and witnessed God’s glory.” 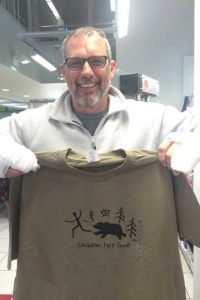 The impact of Jim’s experience manifested itself during his recovery in the hospital when, for the first time in his life, he felt called to pray with the patient sharing his room. “Praying alone, yes. Praying out loud over another person? That was new to me and it was scary. But I felt called to do it, and after I finished, that grumpy man looked up at me and said, ‘Thank you. That’s the first time anyone has ever prayed for me.’”

“That’s what this experience has done for me. I went from a back seat to a front seat Christian,” Jim said. “Now when I speak to men, I try to get them to see how precious life is. As men, how many dance recitals and football games have we missed? That bear ripped me apart for 90 seconds. If you only had 90 seconds left to think about it, what do you wish you would have done differently?”

Jim continued, “We have no control over time. Matthew 24:42 tells us that we don’t know which day the Lord is coming. Stick a toothpick in water and then pull it out. How much did you change that water? That’s exactly how much control you have over your time on this Earth. So we need to quit majoring in the minors and minoring in the majors. We need to concentrate on what’s important.”

Jim no longer worries about his salvation. In fact, he already has an idea about the afterlife. “When I go to heaven, I’m hoping there will be a grizzly standing before me and Jesus reminding me of His salvation when I needed it the most. Then I’m hoping to meet the individuals who accepted Jesus after hearing my story.”

Dear Doctor: Side or Tummy Sleeping?

Like a Good Neighbor, Father Paul and His Church Are There