Recognizing good bones in a house comes easily for an architect. The historically registered Stewart-Lott House was an ideal choice for Don Purser, owner of Purser Architectural, to move his business to. 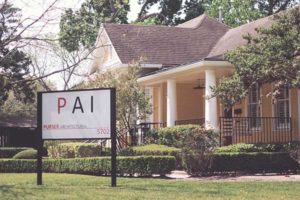 “I have always wanted to have a historic home as an architect office,” Purser said. “The old historic home reflects our style and business tremendously well.”

Purser Architectural used to operate out of an office in the Memorial area of Houston. It now operates out of the yellow historical home located at 5702 Fourth Street in downtown Katy.

Local doctor James Stewart built the historic home in the early 1900’s to serve as his home and physician’s office, Purser recalled. Later on, the Lott family purchased the house and it remained in the family for several generations.

The previous owners, who owned it for 17 years, happened to be one of Purser’s clients who he knew well and had developed a relationship with. With high hopes, Purser asked if they would be interested in selling the historic home and to his surprise they agreed.

The historic home listed as atlas number 96000067 in the National Register Listing is noted to be significant to the area because of its architecture and design. The Queen Anne architectural style appealed to Purser as well and will be preserved now, that an architectural business resides inside.

The home was already functioning as an office building, rather than a home, when Purser purchased it, but it was in definite need of repair. Purser updated and refinished nearly every surface of the home from the siding and porch outside to the original hardwood floors, bathrooms and doors inside.

Purser brought the entire building up to code for office use, even adding extra parking on the lot to the side of the house. Inside, Purser tried to keep it as original as possible. The bathrooms still include the original bathtubs, which Purser thought were so unique they had to be kept. The tile in the bathrooms and some light fixtures throughout the house are also the original to the home.

The doors inside all needed to be replaced for functionality and code reasons. Only one of the doors was still original to the house. So, Purser took the original five-panel door and had it duplicated for all of the other doorways. 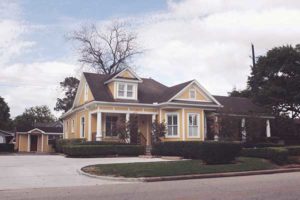 “I have always loved houses,” Purser said. “Everybody lives in one. So when the historic home was available it was just exactly what I preferred over a new office structure building.”

The renovations and updates took about three months but seemed much longer for Purser, who was ready to get in the space to continue Purser Architectural’s business.

Moving to Katy allowed Purser to not only be closer to home but closer to a large base of his clients. Numerous residential and commercial clients of Purser Architectural are in Katy and the greater area.

“Everybody has been so welcoming,” Purser said. “We have people walk-in all the time curious about the home and the work we do. It is just a very friendly community. We are very proud to be here.”

Purser is not a Katy native or local Houstonian. He grew up in San Angelo, Texas. He met his wife, who is a local Houstonian, at Texas Tech University while studying architecture. After graduation, he followed her to Houston to begin his architectural career and eventually their life together.

At an early age, Purser was interested in doodling and sketching. It led to him working for an architect in San Angelo all throughout high school and then to Texas Tech to earn a degree in the trade. Purser has now been in the business for 40 years and owned his own firm for 36 years.

“After those few early years, I felt like I could make it on my own with my own firm,” Purser said. “So I just kind of bit the bullet, dove in and never looked backed. The Lord has blessed me I can tell you that.”

Purser revealed he never has spent much on marketing, because he has acquired most of his business by word of mouth through referrals from previous clients. Purser started the firm primarily has a residential architectural firm, where they designed custom homes. However, his book of work quickly expanded to commercial properties.

“We do a tremendous amount of commercial work now because of a lot of my clients who we did houses for have come back,” Purser said. “They liked what we did with their house and want us to do the same for the dentist offices or office buildings.”

“When I sit down with a client and design with them, I think of it like a three-dimensional puzzle,” Purser said. “They tell me all of the things they like and want, and I put all of the pieces together.”

Each project is so different for Purser. Even though he is designing house after house, he is never bored. Everyone has a different style and wishes.

“The rewarding part is that you start out with just ideas,” Purser said. “Then you put them on paper, then in graphic form and then after that process you get to see it grow out of the ground.”

Purser still considers what he does as fun and not work after all of these years. From his reputation and even his office building, it is evident Purser cannot only design good bones but pick them too. To find out more about Purser Architectural visit purserarchitectural.com.

Like a Good Neighbor, Father Paul and His Church Are There