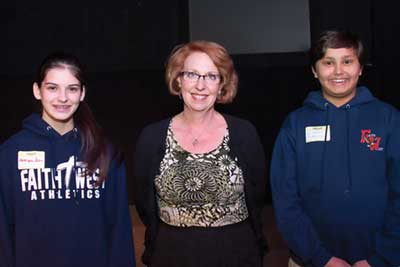 The top Faith West Academy speller for the school-level, Houston Public Media Spelling Bee was eighth grader, Georgia Klar, daughter of Henry and Michelle Klar.  In the 14th and Championship Round, the winning word was umami.  Georgia will advance to the private school district competition for Harris County Private Schools Spelling Bee in February.

Forty-seven minutes into the competition, the 13th round (after 27 competitors had been eliminated) had begun with Klar spelling ‘doubloons’ correctly.  Second place winner, Jonathan Rightmire, misspelled neophyte by replacing the “y” with an “i.”

This was the second time Klar won the school-level competition.  In 2013, at the age of twelve, she ousted 32 of the top spellers at Faith West.  Klar attributes her success to being an avid reader. Her favorite author is John A. Graham, which she describes his writings to be “realistic fiction.”

Klar is on the junior high cheer team that just returned from Nationals in Florida.  She is also an excellent softball player and is looking forward to another exciting season.

As I See It: A Bill’s Perilous Journey