The China-bashing has started all over again. It’s like 1.6 billion people do not matter. You would think this is 2023 and political leaders should sort of grow up, finally and stop maligning a whole race of people.

But no. All of America is being galvanized to hate China. China, China, China. ‘The biggest threat to America is China.’ ‘China will ruin America.’ ‘We must teach our children to be wary of China.’

1.6 billion people seriously do not matter. I surmise it is good Democrat wisdom if we would just die. That should reduce “overpopulation” and free up the planet’s “limited resources” for “sustainable use” among the survivors. What is 8 billion minus 1.6 billion? 6.4 billion. This brings us to pre-2005 levels. The world could gain twenty more sustainable years if China would just curl up and die.

On the surface, the doctrine of scarcity makes a lot of sense. It is claimed the experts have had to dig harder to find petroleum. By and large it is also quite difficult (and expensive) to make new land – filling in the sea and firming up new patches of livable land. Water – potable, drinkable, hygienic – gets pricier each time. The doctrine of scarcity forms the basis for ideologies that focus on annihilating sections of the population, so that the survivors can “live better.”

But what if resources are actually more than sufficient, and it has always been the mismanagement of resources that leads to insufficiencies in various places? Bickering, gridlock, the unwillingness of politicians to work together, and governments second-guessing each other actually result in nothing being done in the near-term. When you have poverty, outages, shortfalls, and homelessness, it isn’t because there isn’t enough to go around.

There is enough. Problems have emerged only because of leaders either elected or unelected, who possess power and authority, but refuse to serve the people. A good politician has clear priorities: s/he will focus on safeguarding the economy, building a framework for business and entrepreneurship, fostering city expansion and satellite towns, and enhancing the infrastructure for logistics and communications. How many politicians in the world’s congresses and cabinets are like that? Precious few. 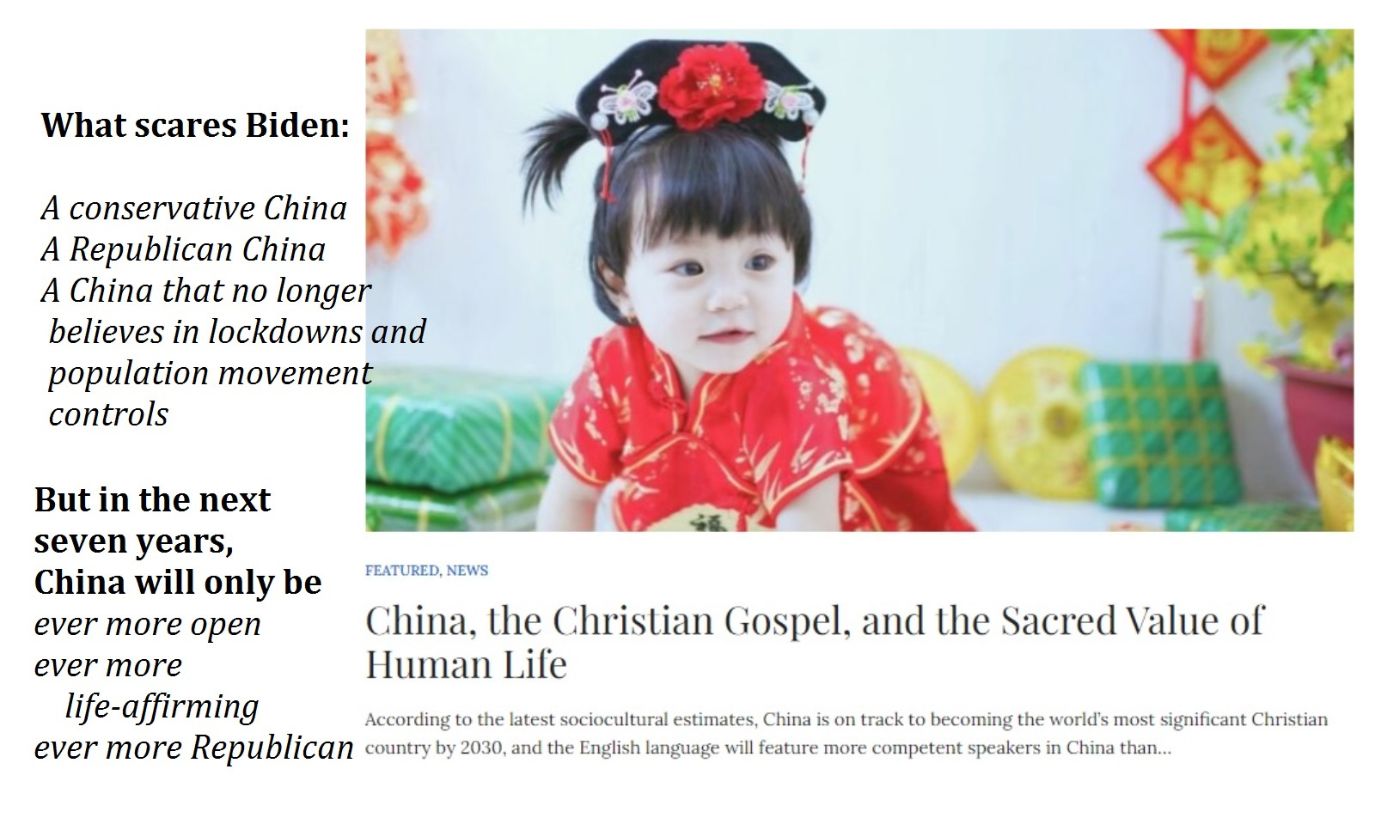 Biden Punishes China For Her Conservatism

Pundits and politicians continue to lambast China, even when the Government of China has caved on two fronts: it has responded to the wishes of the Chinese people by a. undoing the decades-long Marxist one-child policy in its entirety, so that the native Chinese people (92% of the citizenry) will not have to endure an abortion culture anymore; and b. abandoning the ‘zero Covid’ policy centered on stamping out the virus.

All across mainland China, the Republic of China, and the Chinese diaspora in Malaysia, the general sentiment has become quite clear: the virus is not the problem. The vaccines and lockdowns are.

As China becomes less Marxist and increasingly more conservative, returning thus to the classical Chinese roots that define the Chinese people, the Biden Administration has instead chosen to punish China even more: the moment China decided to save the livelihoods of the people and remove harsh lockdowns, Biden proceeded to impose travel restrictions on Chinese nationals.

The Biden Administration goes the extra mile, raising a proverbial middle finger to China’s reversal on abortion. This year (2023), U.S. authorities have approved all-round accessibility to a drug that enables Americans to kill babies in the womb easily and conveniently, obtainable at your friendly local Rx, so that innocent lives as young as two and a half months can just die and go away.

Lockdowns have crippled state economies and local towns and cities in the United States. People have lost jobs, run out of cash, or quit school. Americans are living on credit and debt, and have no new income. The lockdowns have coerced Americans into a limbo of non-work: this actually cripples China. A sluggish American economy slows China down as well, point for point.

In the same way, the Government of China has implemented lockdowns, lifted them, and implemented them again – this destroys the Chinese economic potential. A sluggish China deals an adverse blow to American investments and slows America down, point for point.

Do you see how it all makes sense now, the way the Gentile nations are indeed interconnected? For God is no respecter of persons, and He does not esteem one higher than the other. If Israel was to forever be the sole custodian of the gospel, God would have never told Paul to bring the message to Gentiles. Soon, Paul became a hero in “the churches of the Gentiles” – to use his words. Back home in Canaan, Paul was not similarly welcome in his Jewish community. This is the irony.

The moment God showed Simon Peter the vision of beasts in the cloth, the dispensation was henceforth open to all. The gospel will belong not just to the Jew, but also to the Greek. Through the inclusiveness of Christ, the Christian religion became the largest faith by numbers on the face of the earth before the recent ascent of Islam in modern times. 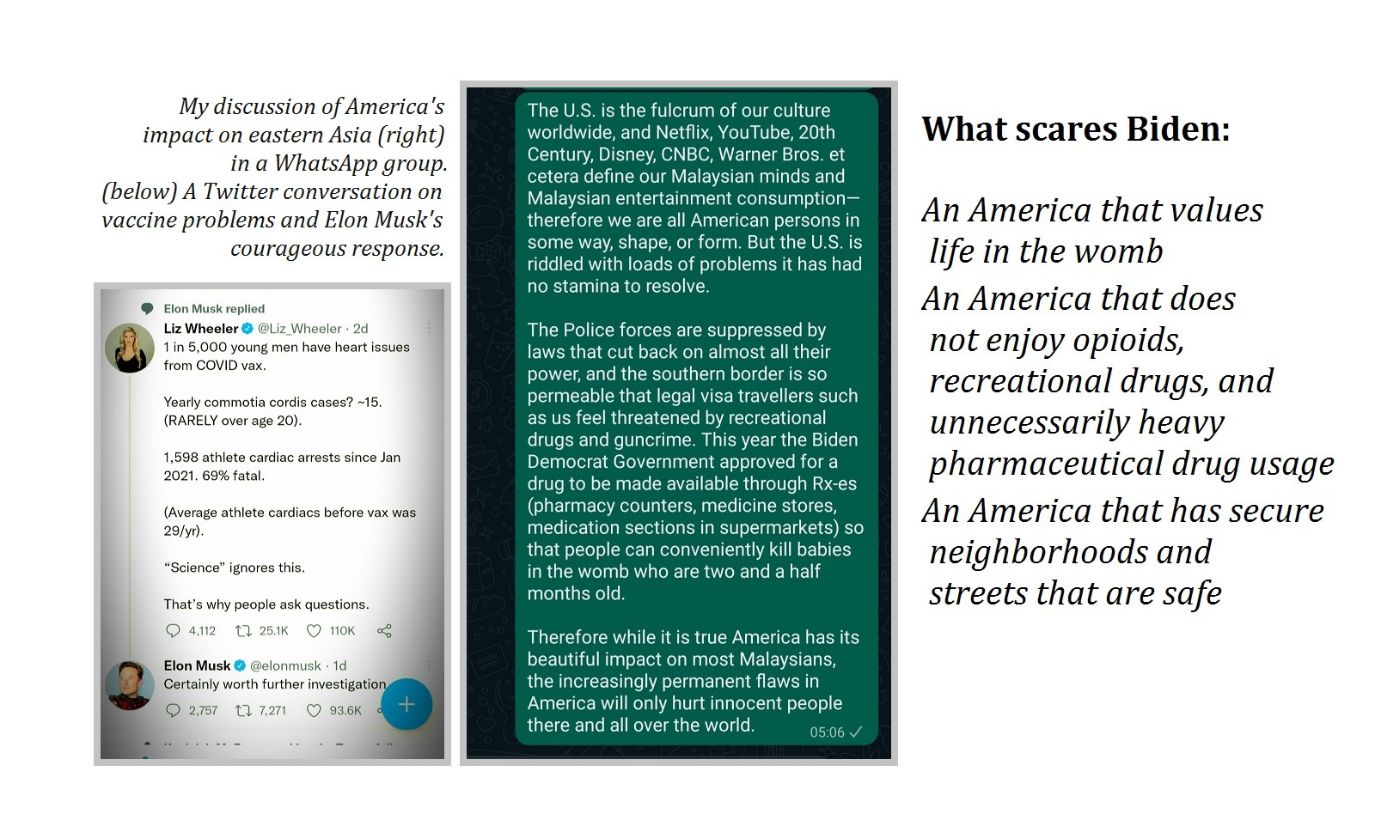 What do you think the Chinese people feel, when Democrats and some Republicans choose to use the word China each and every time Congress holds sessions, and the habitual search for an Oriental boogeyman seems to render discrimination against China okay?

China is five thousand years old – older than the Canaanite Palestinian civilization and the earliest tribal states of Israel. China has never migrated away from her location in the Far East, and she inspired the cultural stylings and orthographical sensibilities of the subsequent nations of Korea and Japan.

China’s present-day Beijing Government is only 73 years old, founded by Soviet help in 1949. Communism, and Marxist-Leninist Thought to be precise are completely new to China, and it is not the fault of modern-day Chinese that there is such a governing system in this country. Do you think newer-generation members of the party are wildly excited about Marxist-Leninist Thought? No. They cannot possibly be. Marxist Leninism is a non-Chinese governmental philosophy.

Haven’t the educational, economic, and commercial restorations of the Chinese nation in recent times done enough to prove the salient fact that China is neither socialist nor communist, and certainly no longer atheistic?

For those in social media who are ruled by visuals, there is one thing that continues to make them uncomfortable: the flag of mainland China. It is a crimson banner with five yellow stars – quite the Soviet design, and certainly not Chinese.

That flag was created in 1949. We the Chinese nation can create a new one, or go back to an older, pre-1949 one. But if the issue among fearmongers is that we currently have a stupid flag that looks Soviet, and we are therefore a terrifying megalith that will conquer the world and bring about Armageddon, then these commentators are wrong – just plain wrong.

I am confident the fearmongers have yet to actually hang out with Chinese people for real.

Change Your Worry to Prayer