Suppose Christians in the Greater Houston had to select one person to represent them in the public arena and defend the faith in Jesus Christ against Atheism. Who would be called?

I’d recommend the same person we would call to defend us after an oil spill, a major medical malpractice, or a pharmaceutical error—attorney Mark Lanier.

Attorney and biblical scholar Mark Lanier just released a powerful new book, Atheism on Trial: A Lawyer Examines the Case for Unbelief. This latest book is part of a three-book project following after Christianity on Trial (IVP, 2014) and coming before a future volume Lanier has in the works on world religions.

As many Houstonians know, Lanier, founder of the Lanier Theological Library and practicing attorney, has spent almost four decades in courtrooms across America arguing landmark cases in pharmaceutical, medical, and antitrust cases. His latest manuscript beautifully combines his love for scripture and his passion for the law into a powerful argument for the existence of God. 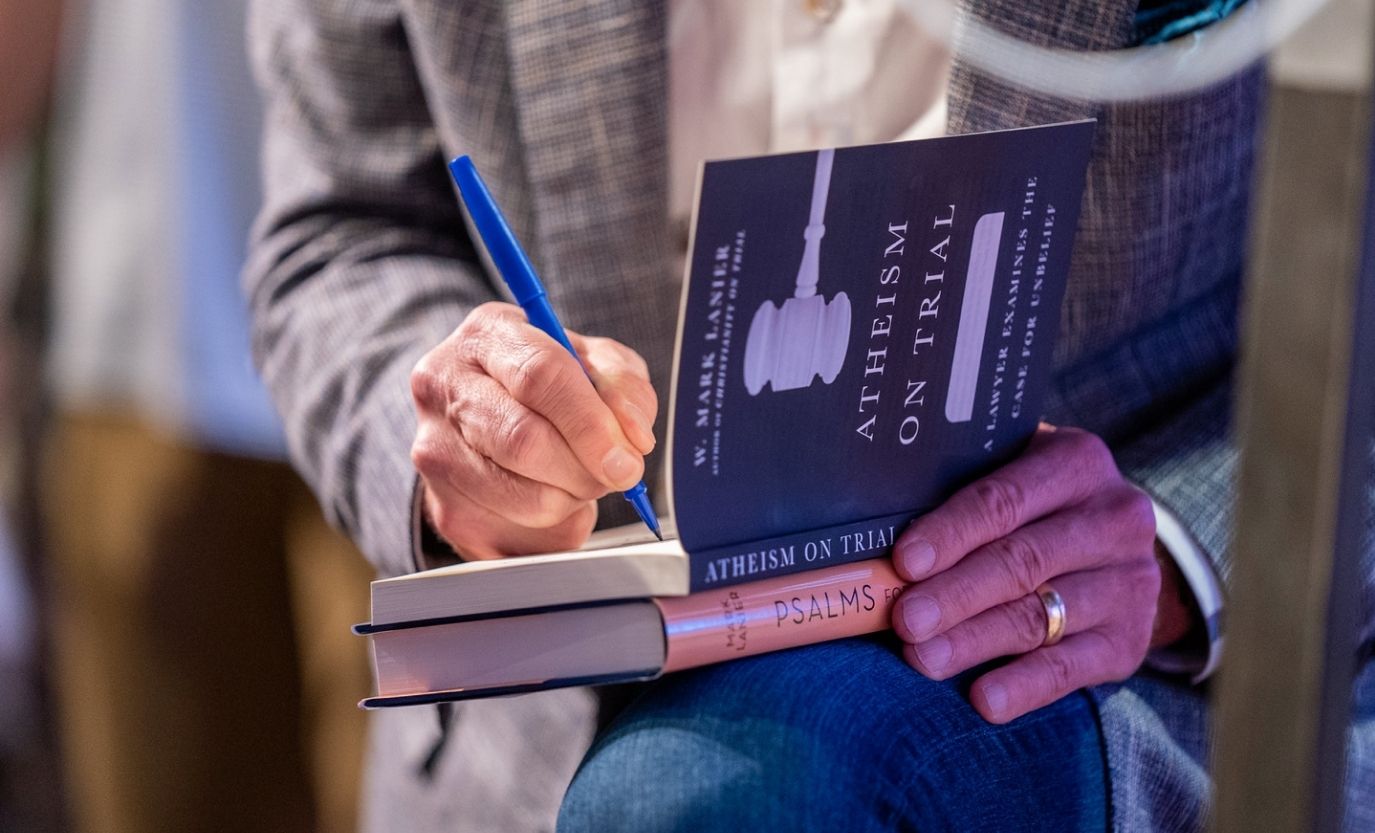 We enter the jury box as lawyer Lanier makes his introductory remarks, a legal primer to help define the concept of truth. Lanier explains the difference between direct evidence and circumstantial evidence, offering examples of each from his past cases in the law. He then describes how important the issue of credibility is when considering evidence– giving a spell-biding example of how this played out in one of his past jury-cases. Lanier closes his introductory remarks explaining the burden of proof and then announces the book’s goal to use the “rules of logic, common sense, and fair play, to examine the tenets of atheism, agnosticism, and scientific materialism” (p. 9) from the Christian perspective he lays out in the second chapter.

Lanier first targets atheism by distinguishing it from agnosticism and theism. He makes a convincing argument (based on an asbestos case he once argued) that atheism cannot meet its own burden of proof—it cannot prove a negative. He reviews the work of the supposed “Four Horsemen of the New Atheism” and points out the lack of substantive proof that God doesn’t exist. At best they merely tear down reasons for believing in God. In the following chapter Lanier summarizes the atheist arguments against God and assesses each.

Agnosticism and its arguments follow after Lanier’s assessment of atheism with a review of the differences between an agnostic and atheist. Lanier offers helpful graphics and charts to assist the reader-jurist in understanding the worldview separating agnosticism from theism (a belief in God). Scales of justice are incorporated by Lanier as he asks readers to weigh the evidence for a worldview with and without God. Each reader is asked to place on the scales such weighty issues as: morality, beauty, justice, human dignity, and significance.

Honoring his opening “fair play” pledge to be unbiased in a relentless pursuit of truth, Lanier also introduces challenges to the case for God. Like a good lawyer, Lanier does not shy away from the greatest challenges to his case—especially “The Problem of Suffering.” Instead, Lanier devotes one of his richest chapters to the topic. He follows it up with a helpful consideration of the hiddenness of God and how to assess seemingly unanswered prayer and feelings of God’s abandonment. This chapter has resonated in significant ways with college-aged readers. 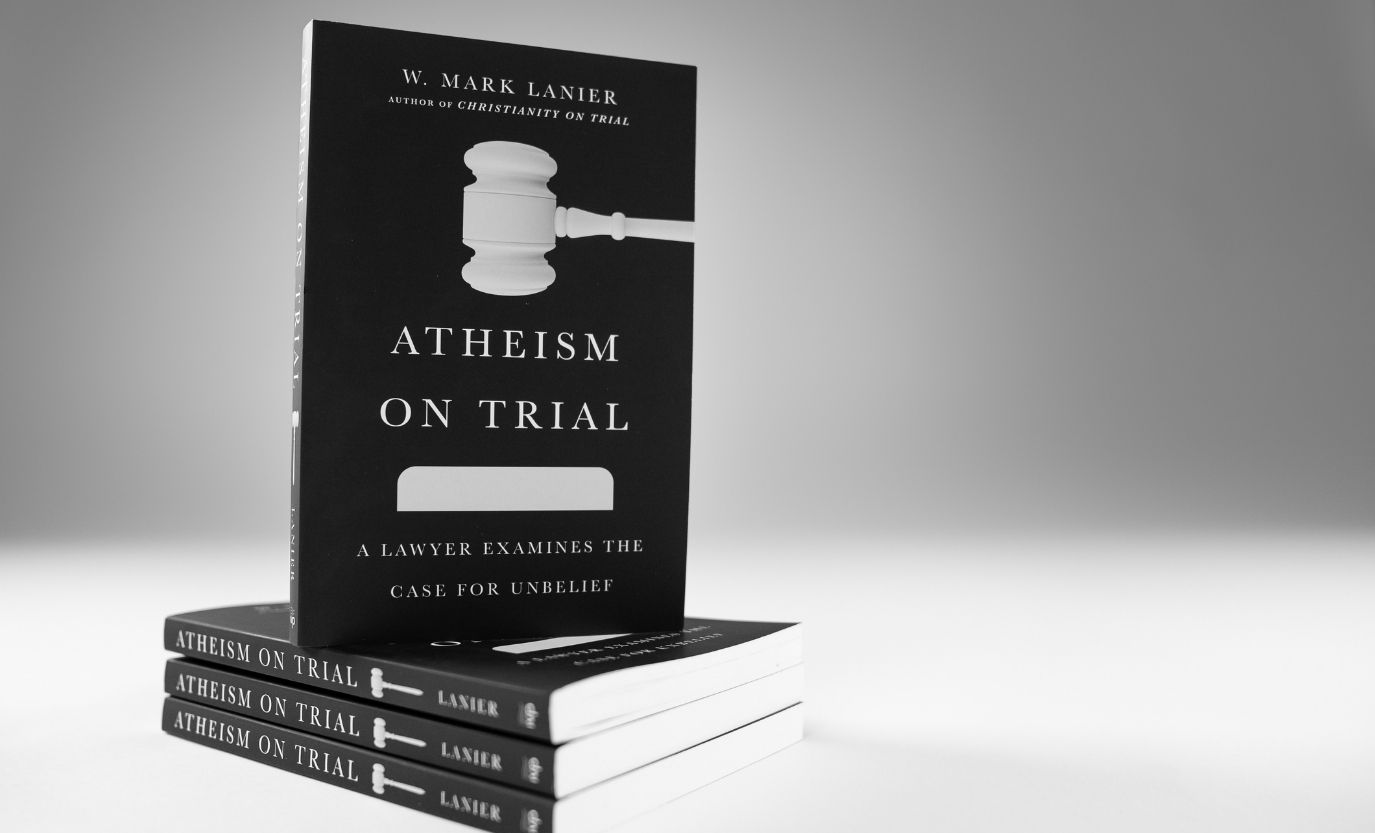 The book builds towards its conclusion examining issues of scientific materialism. Unafraid to venture deep into the faith and science dialogue, Lanier follows with a chapter devoted to evolution and intelligent design. In this helpful examination of creation and science, Lanier lays out the possibilities allowing readers to weigh the evidence and arrive at an evidence-based conclusion.

“Follow the evidence…” is Lanier’s plea in his “Closing Argument.” In this last chapter he invites reader-jurists to follow the evidence. Each reader-jurist must decide upon a worldview, and which way the magnets of life should be positioned to bring a world into balance, harmony and inner joy. Each reader in the jury box of life must decide whether life is basically a sack of chemicals designed by time and chance—or, a life designed by a divine decision reflecting a measure of its creator. Each reader-jurist must decide whether life is arbitrary or filled with divine purpose.

Lanier challenges each of us to weigh the evidence, deliberate upon the arguments, then embrace the world view that is most compelling. Once again, Lanier has stood before a jury of his peers and made a most compelling argument for faith in Jesus Christ. You never know when it will be your turn, “to give an answer to anyone who asks you to give the reason for the hope you have” (I Peter 3: 15). Not only is Atheism on Trial worth reading but doing will make you a better defender of the faith (an apologist) as well!

Video link of Mark Lanier on the book: youtu.be/81vflhL4un8 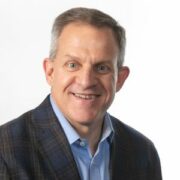 (Dr. W. Scott Sager is VP for Church Relations at Lipscomb University in Nashville, TN where he leads seminars and regional conferences, publishes a magazine and teaches in the College of Bible & Ministry. Sager is a regular visitor to Houston and the Lanier Theological Library. He has recently published two books of his own, Lazarus, Viruses, and Us and Disciple Making: The Core Mission of the Church)

An Escape Just a Hop Away for Easter Travels