The Ministry of Foreign Affairs, China, has spoken clearly on China’s support for the Ukraine, but there are dishonest pundits and crafty analysts in some media outlets, who have deliberately chosen to cast China as some sort of boogeyman high on Cold War Communism.

Scripture demands honesty, and above all the avoidance of false testimony against people. That is a Commandment of Sinai that sounds very sensible today—particularly when the truth of things helps to secure the reputation of Chinese folk, and assure the Ukrainians of the world that the Chinese people do love the Ukraine, and that the Government in Beijing stands with the Ukraine, even when Beijing is officially leftist.

Leftist politics have fallen aside, and the Chinese position on the Ukraine is clear, both in Mandarin and in the various translations in English. The Chinese originals are excerpted here for your perusal. All Chinese private and state-run media organs promote the defense of the Ukraine and Ukrainian territorial completeness, also translated as territorial integrity.

The Ministry of Foreign Affairs, China, the equivalent of the U.S. State Department, has declared with utmost clarity:

“China upholds Ukrainian sovereignty, independence, and territorial completeness, and China was among the very first countries to recognize the independence of the Ukraine. In 2001, the Ukraine and China began comprehensive cooperation, and instituted strategic partnership in 2011. In 2020, bilateral trade between the Ukraine and China came up to 14.66 billion U.S. dollars. Chinese exports to the Ukraine was only 6.87 billion dollars, and exhibited a decline of 7% from 2019. By contrast, the importation of Ukrainian goods and services into China was 7.79 billion dollars—a 72.8% increase from 2019.” 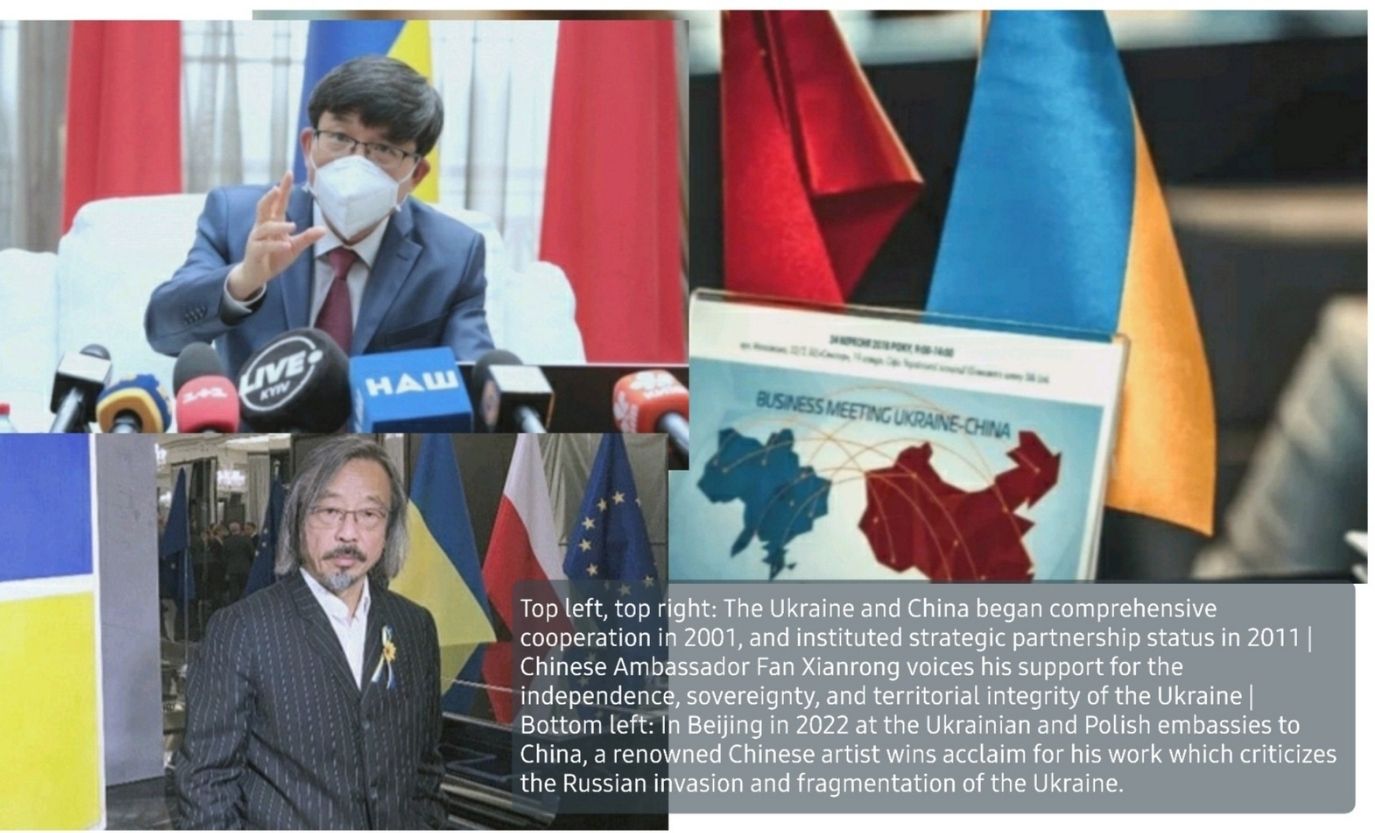 THE CHINESE SUPPORT THE UKRAINIANS

The Chinese authorities have declared their overwhelming gratitude for the Ukrainian Government and Ukrainian people, and provide a most pointed, and scathing criticism of the Russian Government’s actions:

“The security of one country should never injure the security of another country. Regional security is not to be achieved by intensifying and expanding military gangs (militias/guerillas).

“Chinese students in the Ukraine, Chinese businesspeople in the Ukraine, and diaspora Chinese communities in the Ukraine are bridges and connectors for friendship and cooperation between the Ukraine and China. China thanks all sectors of Ukrainian society for having cared for citizens of China in the Ukraine. China has a fundamental stance on the crisis in the Ukraine, a stance that is unfettered, transparent, and unchanging: we China sustain our permanent insistence for the upholding of the sovereignty and territorial completeness of the various States.”

These are words of the Ministry of Foreign Affairs, China, and the clarity is unmistakable. It is obvious the Chinese Government speaks directly to matters, and often goes even further; the reports continue:

“We must provide total coverage for internally displaced persons in the Ukraine, and help them in useful and complete ways to get places to live. We must facilitate United Nations humanitarian relief efforts in the Ukraine, and provide support for the work of the UN crisis mediation professionals. China must work diligently to overcome the humanitarian crisis in the Ukraine. The Chinese Red Cross is getting humanitarian relief supplies to the Ukraine with intense speed. It is of tremendous urgency that the various parties to this war begin to push for dialogue and negotiations, and rush for a ceasefire and a cessation of war, so that deaths and injuries to civilians can be stopped, and the humanitarian crisis brought to an end.” 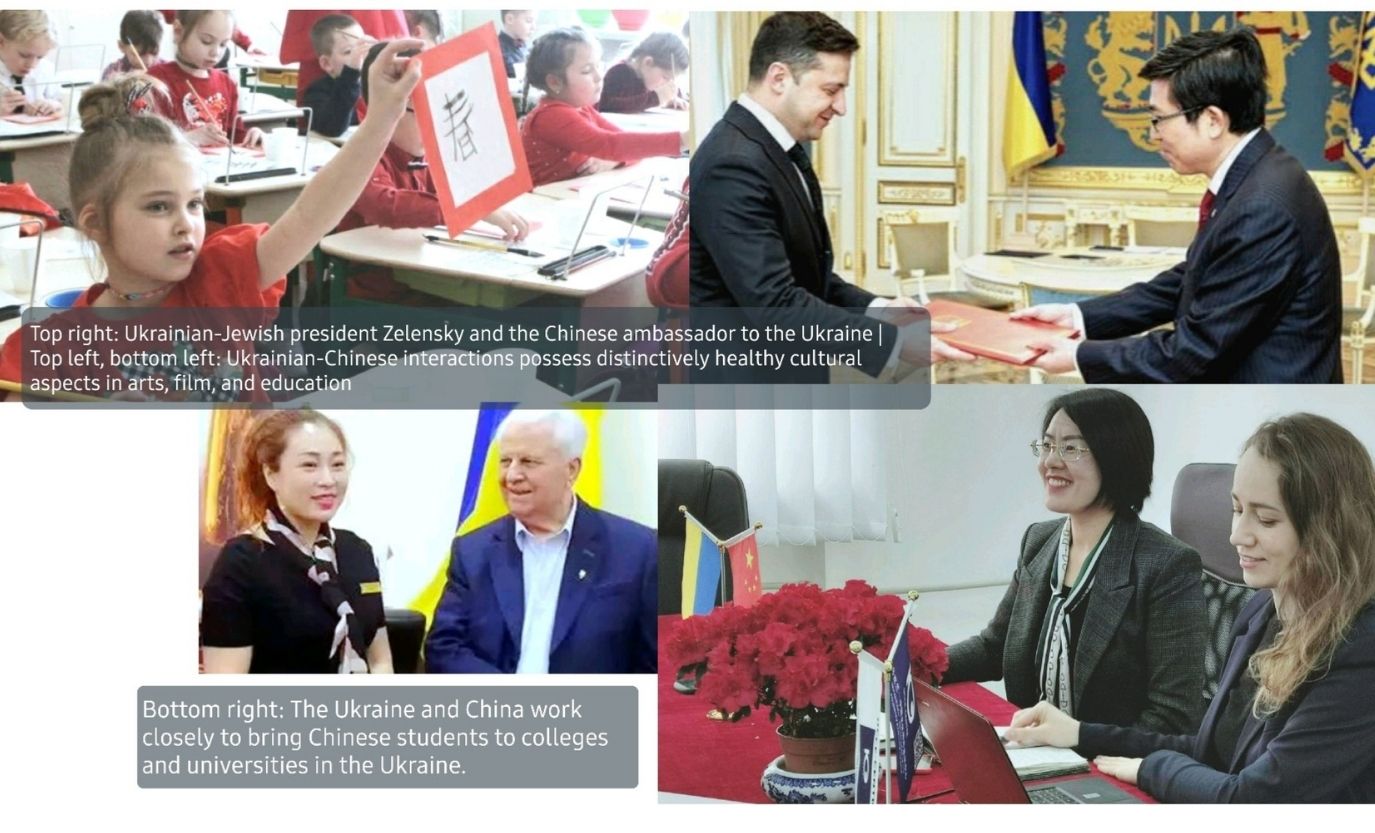 THE CHINESE PEOPLE AND CHINESE GOVERNMENT ARE NATURALLY INCLINED TOWARD UKRAINE

Even when there is a Communist Government in China, that is a Government that evidently supports the right of the Ukraine to its independence, sovereignty, and completeness of territory.

The Russian invasions have stolen Crimea from the Ukraine; and portions of the Ukrainian Donbas region have become vassal possessions of the Russian Government. Such actions have obviously worried China, and China has never supported Russia on these things.

Indeed, researcher Zhang Lihua of the Tsinghua-Carnegie institute in China criticizes Russia quite succinctly, in regards of the situation in Crimea, “Russian actions in Crimea have caused the Chinese people to think back to Soviet times in 1945, when the Soviet Union took Upper Mongolia away from China.”—Upper and Inner Mongolias were regions of China, before the Soviets annexed the northern portion for Communism.

Zhang is incisive and does not hold back on what she knows is Russia’s fault, “The Russian referendum in Crimea and the absorption of Crimea exacerbate the confrontations between Russia and the Ukraine, and has ignited a series of military conflicts and long-term instability.”

The Ministry of Foreign Affairs, China, has this to say concerning Crimea, “Crimea is a Ukrainian region. On April 15, 1996, Crimea became twinned with the Hainan Province in China. In 1997, the Russian Government recognized Crimea as Ukrainian territory.” This is the Chinese support for Ukrainian Crimea and the unquestionably principled commitment of the Chinese in regards of Ukrainian sovereignty in Crimea.

Many research and media outlets in China are government-linked or government-supervised, such as the Tsinghua university aforementioned, and news outfits like Sina, Xinmin, and Xinhua. These news organs and research institutions overwhelmingly support Ukrainian people, the Ukrainian nation, and Ukrainian sovereignty. In press, photos, videos, and on-the-ground reporting, the Chinese affinity and fondness for the Ukraine is always directly presented, without any sort of coyness or inhibition. The State Council of China (a Department of the Interior equivalent), and the Ministry of Foreign Affairs have also been very apparent in their support for Ukrainian rights. 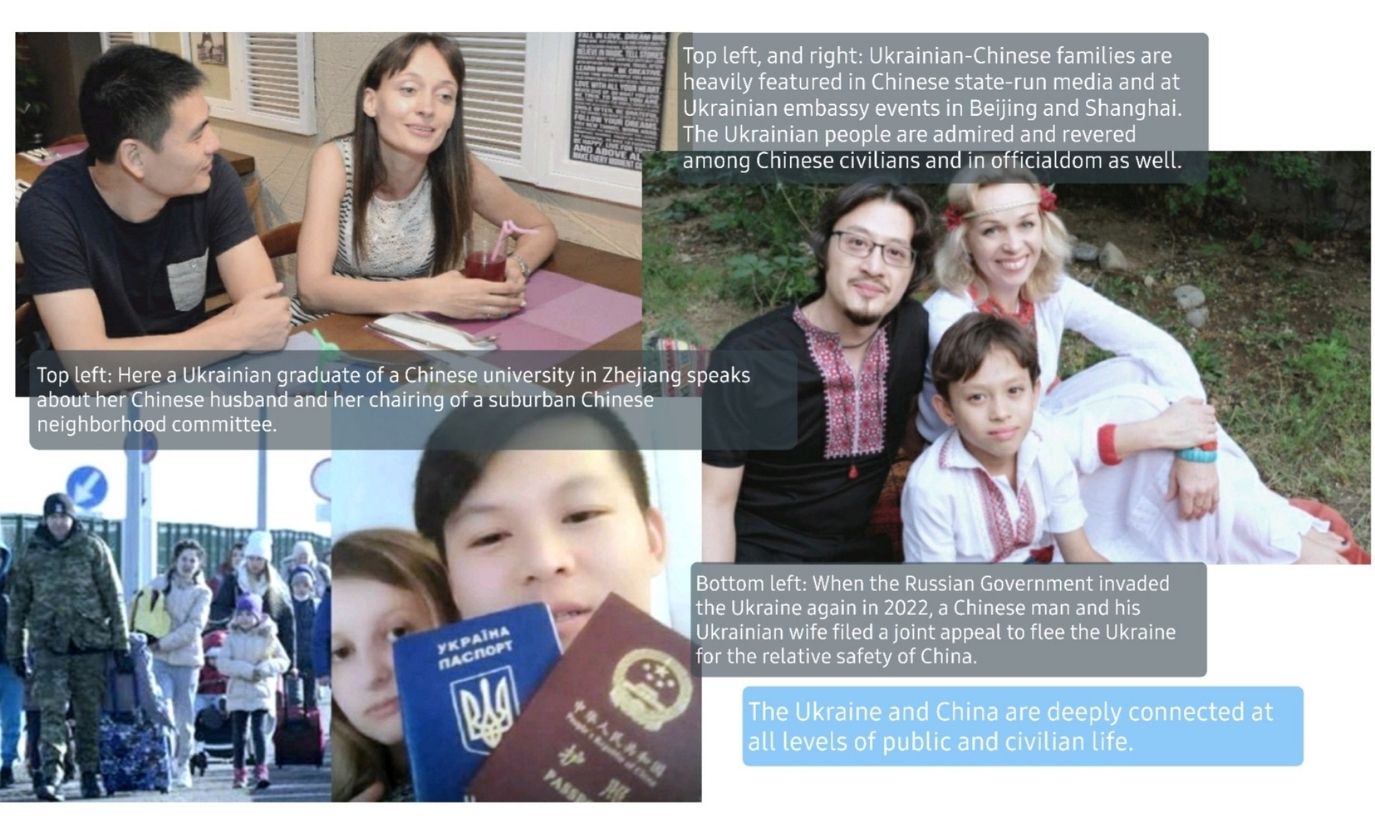 In fact, Wang Xianju of the State Council, China, said this about Russia’s intentions, “Once Russia enters the Donbas region, the entirety of the Ukraine is up for grabs as far as the Russian eye sees.” ( 如果俄罗斯进入顿巴斯，相当于整个乌克兰都展现在它面前。)

Tang Jun—a reporter at Chinese state media Sina Finance, a popular and trusted source for up-to-date business and financial news—compiled a detailed report recently on Chinese persons residing in the Ukraine, “For Chinese nationals in Ukraine’s Donbas region, the nights there are pitch-black.

“In a park in one of the cities, the Ukrainian national flag soars in the wind as usual, but there is no one strolling in the park square beneath the flag.”

The dastardly nature of this war on the Ukraine is put into even sharper perspective by Wu Jian, a journalist at the Xinmin Nightly News:

“On February 21, 2022, Russian President Putin announced recognition for the separatist entities in east Ukraine, and gave ‘independence’ to the ‘Donetsk People’s Republic’ and ‘Luhansk People’s Republic.’ A Ukrainian website has described, that the Russians simply drove like a tank straight into Donbas, way before the outside world could even understand what the ‘labyrinth’ of the Donbas region was.”

Wu Jian shares the same views as the Chinese Government—that the Donbas insurgents are separatists. These breakaway movements threaten the territorial completeness of the Ukraine. Wu reminds us, that “in other words, if Russia turns Donbas into the next Crimea, it will not signify an end to armed conflict, but rather the emergence of a full-fledged war.”

Perceptive and unafraid, Wu summarizes the Russian specter in just a few words, “Russia’s biggest weakness is the fact that it lacks the modernization and development plans that the Ukraine and other post-Soviet States need.” 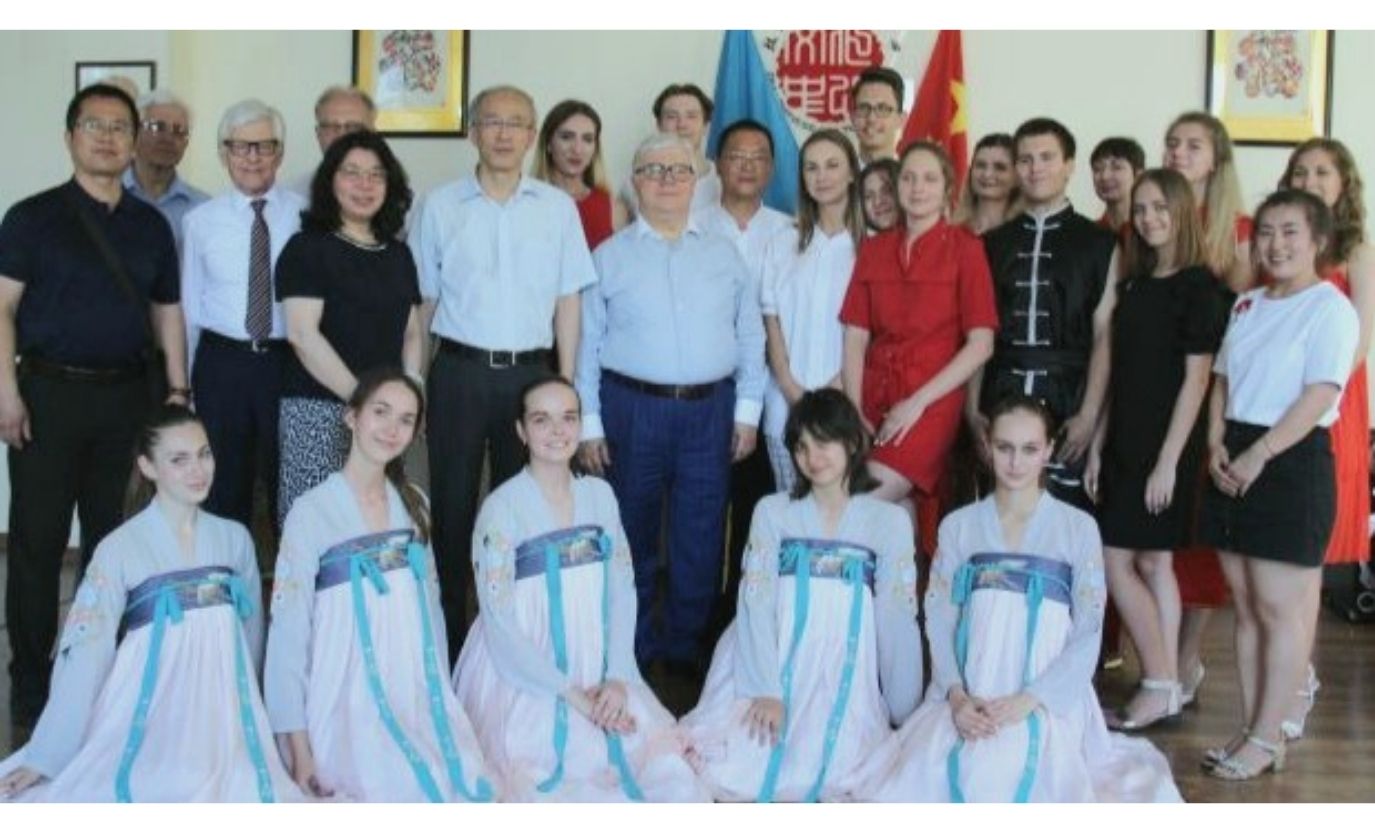 Ukrainians and Chinese at a top-level intercultural exchange. The Ukrainians in the foreground are attired in a fairy-like Chinese dress—a visually stunning and spectacular style informed by Tang and Song dynastic traditions.

WAR IS AN IMPEDIMENT AND DESTROYS PROGRESS

Fan Xianrong is the Chinese Ambassador to the Ukraine, and remains in the Ukraine despite war conditions in the country. He insists that an attitude of perseverance is needed, even when investments and basic services have taken a beating. “The Ukrainian people are going through a hard time,” the ambassador describes, “and we should have an increased level of understanding toward them, and put forth the friendliness and rationality that the Chinese people have always had.”

Fan notes that China upholds the Ukraine’s independence, sovereignty and territorial completeness, and hopes for the present crisis to be resolved through political negotiations, not war.

And now the world waits for the Russian Government to stop shooting, stand down, and retreat into Russia. That is the only sane course of action. Putin must speak with Zelensky, instead of defaulting to guns and projectiles. The twenty-first century is to be built with dialogue, openness, and intensive engagement in social, economic, and intergovernmental spheres—for war and its resultant chaos are unhelpful impediments and of no practical use at all.

Free Festival Brings the Magic of Shakespeare to Life