Take a Bribe, meet your Maker

Sojka’s new novel attacks the worst parts of Washington; career politicians, PACs, and a culture of corruption. Set in the 1990s, Politikill, like his earlier novel Payback Jack packs a plot punch, jerking readers from one wrong assumption to another. Sojka prides himself on forcing readers to pick a side, and then get uncomfortable with their decision.

POLITIKILL opens with the daylight execution of two corrupt U.S. Senators at the famed Watergate Hotel. Recognizing a pattern, Rice University Professor Erasmus Luther unearths a decade old trail of ‘accidental deaths’ that now point to murder. Why do current and former politicians accused of wrongdoing keep dying of accidental overdoses, in hunting accidents, and during muggings?

The books kick-line says it all. Take a Bribe, meet your Maker.

In his first book, child molesters and rapist are the target of anti-hero Payback Jack. Sojka noticed a disturbing trend, “It’s just fiction, but reviewers seem to enjoy corrupt politicians getting executed in POLITIKILL more than rapist and child molesters in Payback Jack. An interesting social commentary, don’t you think?” 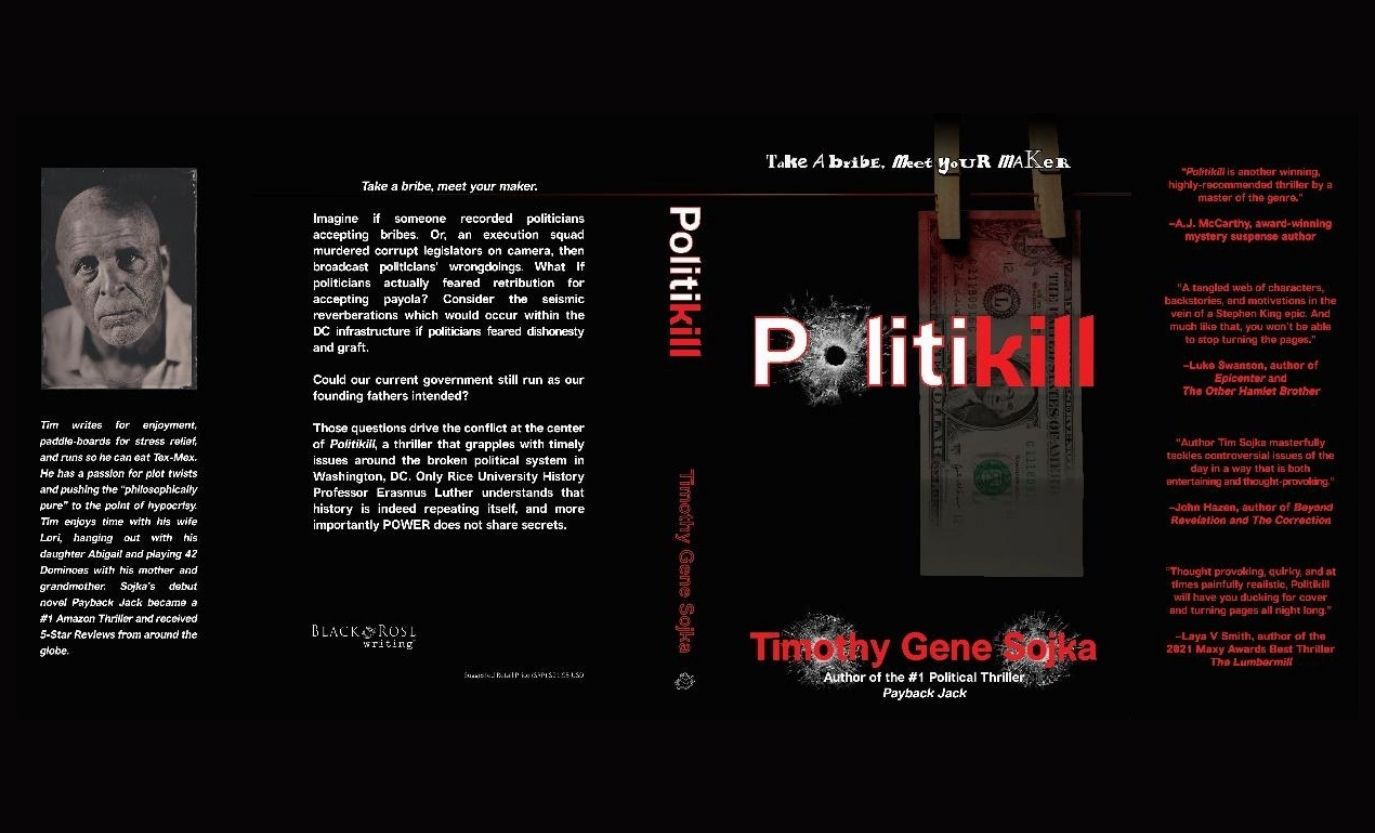 Sojka’s found himself tickled by the early reviews.

Sojka weaves another captivating tale in this thriller that delves into a political system that breeds corruption. Sublime Book Review

The author is a wordsmith extraordinaire, bringing a scene to life and to new heights of visualization through carefully chosen words, and he occasionally creates new words to help us see more clearly. Linda M.

I start painting pictures in my head of these people and before you know it, I’ve got a cast in a movie playing in my head. Amazon Reviewer.

Tim’s a master at hooking readers with characters that you feel like you could be friends within real life, characters that you root for, cringe at, and mourn with. Tim weaves a page-turner of a tale with a not-at-all-in-your-face political ideology, and leaves readers with a burning question in a very clever way – how can we fix the system? Without getting all murdery. Brian V.

Pull up a chair. Put your phone away. Block out time to get enthralled in Politikill from the very beginning. Once again, he takes on a subject that is heated, controversial and timely. Beez B.

I feel like I just binge watched a great series on Netflix. Misty G

Sojka said, “Look this is easy. Either an author can get you off the page … or he can’t. Not to sound cocky, I can. Either a book fools you, which let’s be honest – you want, or it doesn’t. Based on reviews, my first book did, I’m betting POLITIKILL can do the same. ”

Sojka jokes; no actual corrupt politicians died in the making of this book but prays Washington can find a way to clean up their actions without anti-heroes.

Free Festival Brings the Magic of Shakespeare to Life