These challenges are avoidable and stem from Judge Lina Hidalgo’s reckless tax-and-spend agenda. Since 2019, Harris County has experienced an explosion of government spending. While Lina Hidalgo chides the previous Republican administration for adjusting the budget only for inflation, inflation and population growth are the levers by which our local leaders should be constrained, barring extreme emergencies. 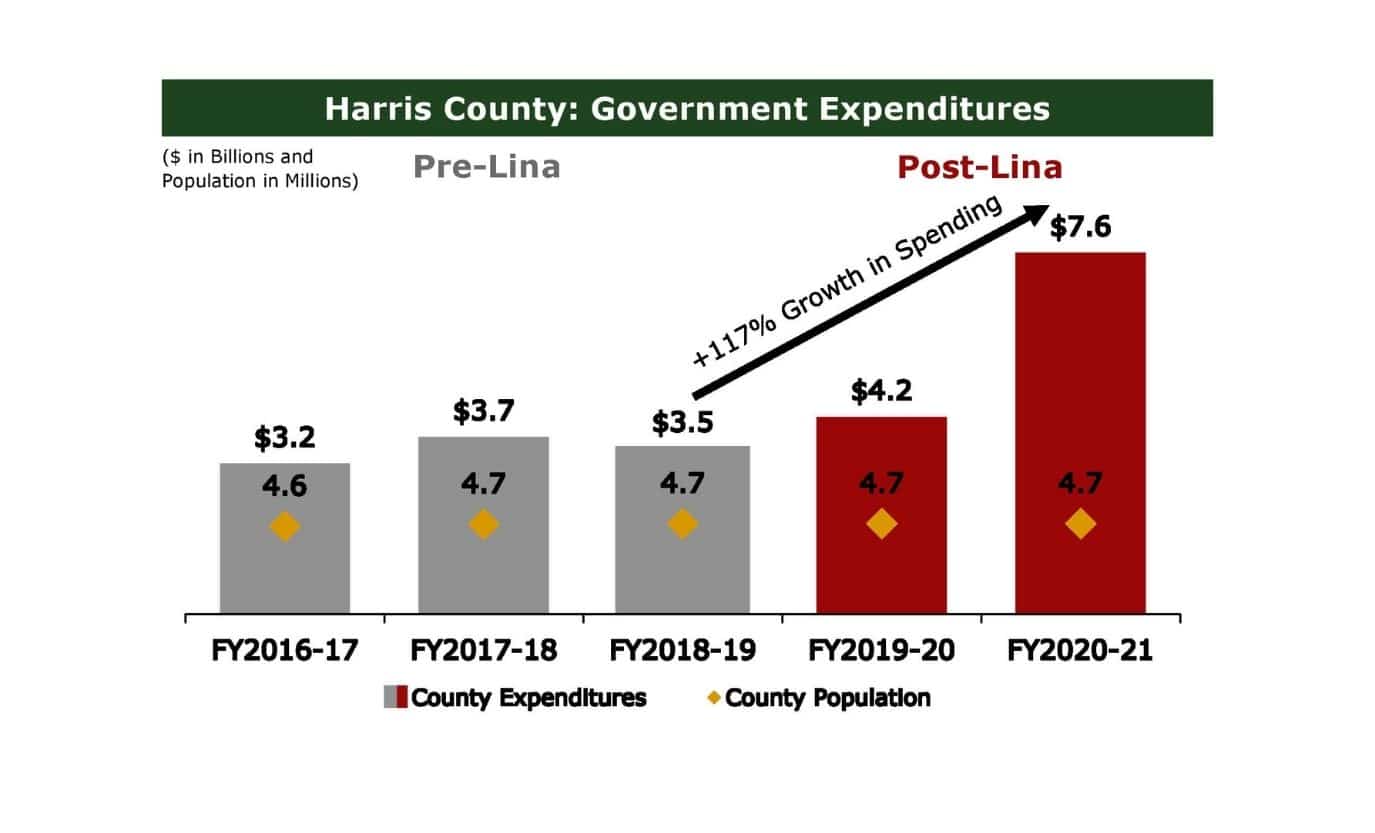 Far from viewing government spending as constrained, Lina Hidalgo budgets by first dreaming up her wish list of progressive spending projects and then reaches into the pockets of hardworking taxpayers to cover the staggering costs.

As alarming as this view of the government’s power to tax should be to all residents of Harris County, the financial consequences of unconstrained government spending are equally alarming. Despite Harris County being one of the wealthiest counties in the country, and the Harris County Appraisal District (HCAD) board inserting a significant backdoor tax increase through raising property valuations an average of 8% in one fiscal year alone, the County is still deficit spending. Not only is the County deficit spending, but the Democrat controlled Commissioners Court is draining key County saving accounts while spending recklessly. For example, the County’s rainy day fund, the Public Improvement Contingency Fund (PIC), as of October 2021, had a balance of $73 million—not even a percentage point of the planned $7.05 billion County budget is set aside for emergencies. Fortunately, due to decades of conservative fiscal policies, the County has an unrestricted cash balance of $320 million as of the latest financials. However, that entire cash reserve is less than the deficit spending for just one fiscal year.

As a recap, Lina Hidalgo and the Democrats who control the Commissioners Court have grown County government at an unprecedented scale and are putting the County on a path to financial distress. 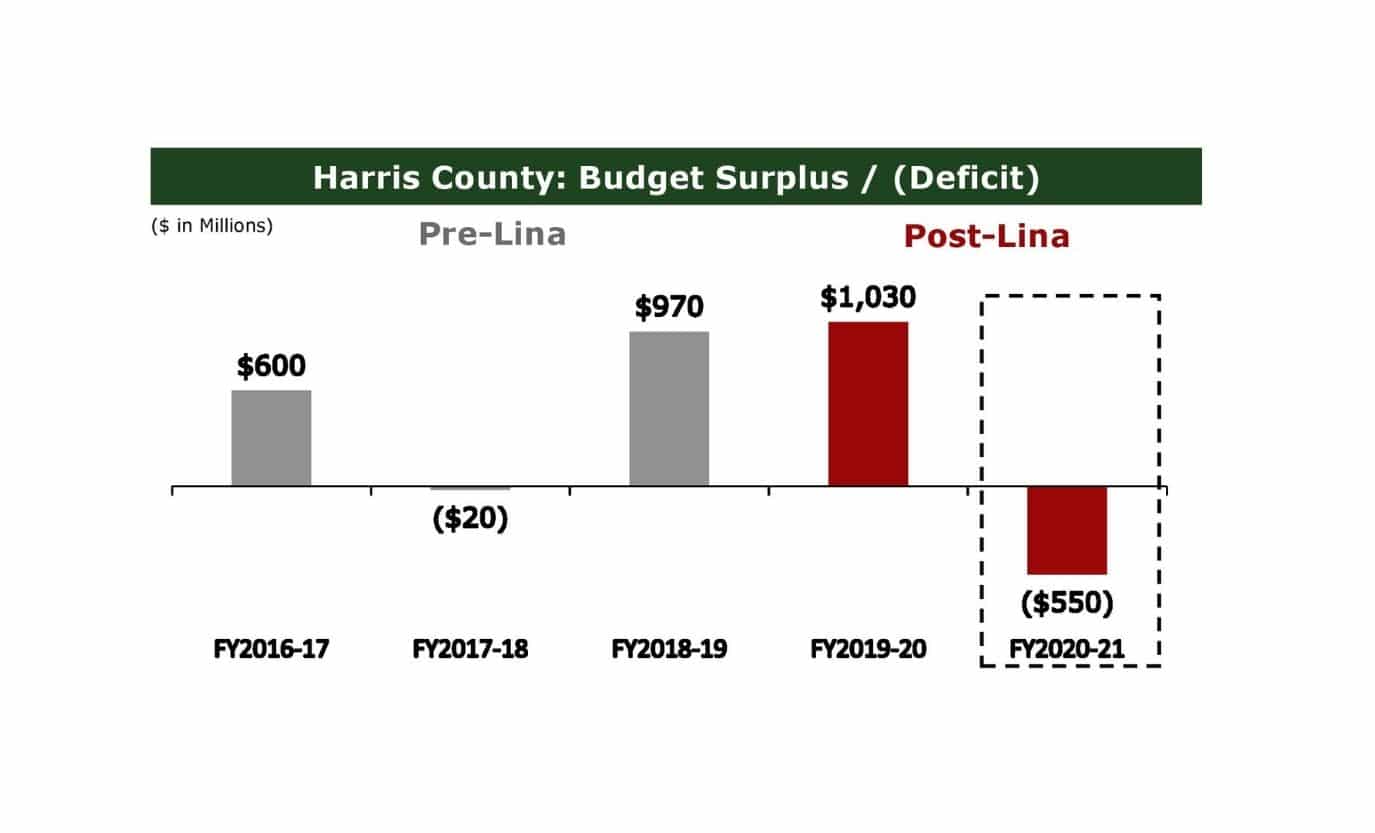 Now, facing Joe Biden’s economy with inflation at 39-year highs, the County is likely going to have two options to fund the vast County bureaucracy going forward (1) raise taxes or (2) issue debt and likely, a combination of both. Unfortunately, as on display in Washington D.C. where the word “deficit” spending rings hollow, we are now being reminded of that notion in Harris County:

“in public administration there is no connection between revenue and expenditure”

This brings us to the truly alarming part of Harris County politics and why the November 2022 election may be the most pivotal election in decades: the no new revenue rule, which keeps the County’s budget flat if a quorum is not reached, defined as 4 of the 5 members of the Commissioners Court being present. Even if the Democrats keep their current 3-2 majority, they need a 4-1 majority to raise taxes. The new map approved by the Commissioners Court, which according to The Texan “not only expands Democratic control but effectively shifts more than two million residents into different precincts,” was designed to achieve precisely that aim by moving the majority of Republican votes into a single precinct, and thus achieving the desired 4-1 majority to raise taxes.

Fundamentally, the proposed County redistricting is a naked power grab by the Democrats to raise taxes and fundamentally redefine Harris County government. As described the liberal Houston Chronicle:

The debate also reflects the philosophical differences in how the members view county government. The Democrats want to make significant new investments in criminal justice, social services, and education while the Republicans desire to stick to the historical role of county government, which kept the tax rate flat, cash reserves high and focused primarily on infrastructure.

And if you remain unconvinced about the true motivation for redistricting, then read Lina’s final comments before she voted in favor of the proposed map:

I know some folks see that [tax rate] discussion as a compromise, but I don’t. I feel that it was my hand was forced…It’s not logical to me why there had to be an even greater tax cut.

It’s time to stand for Harris County and reject Lina’s “government knows best” mentality and return power back to the residents of Harris County by lowering taxes immediately—we do not have a revenue problem; we have a wasteful spending problem. Our government has an obligation to provide safe neighborhoods for our community and has failed to do so. Instead, Lina and the Democrats on the Commissioners Court have funded a slew of progressive pet projects from the creation of the Office of Sustainability to the creation of the County Elections Administrator and the County Budget Administrator. While millions were set aside for new bureaucrats and their staffs, only a few million was allocated to preventive crime measures, such as increasing law enforcement in our most underserved neighborhoods.

My name is Alexandra del Moral Mealer, and I am the Republican candidate for Harris County Judge who is ready and able to hold Lina Hidalgo accountable for her failed progressive policies. I will aggressively cut wasteful government spending and will lower property tax rates while ensuring our criminal justice system is fully funded. Harris County does not have to settle for a high tax, high regulation local government that has failed to provide for public safety—we can and must do better. 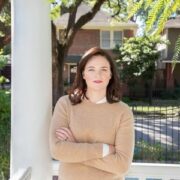 ALEXANDRA DEL MORAL MEALER IS A WIFE & MOTHER OF TWO LIVING IN THE HOUSTON HEIGHTS, A WEST POINT GRADUATE AND COMBAT VETERAN (ARMY BOMB SQUAD), A HARVARD JD/MBA WITH A SUCCESSFUL CAREER IN ENERGY FINANCE, AND A PROUD CONSERVATIVE HISPANIC AMERICAN. ORIGINALLY FROM SACRAMENTO, CA, SHE MOVED TO HOUSTON WITH HER FAMILY FOLLOWING HER SERVICE IN THE U.S. ARMY. LIKE SO MANY FROM CALIFORNIA, SHE RELOCATED TO HOUSTON IN SEARCH OF OPPORTUNITY AND A BETTER QUALITY OF LIFE. HAVING SPENT YEARS HONING HER LEADERSHIP SKILLS IN CHALLENGING ENVIRONMENTS, ALEX IS CONFIDENT THAT SHE CAN DELIVER RESULTS UNDER PRESSURE. SHE HAS NOT ONLY DISARMED BOMBS IN AFGHANISTAN, BUT SHE HAS ALSO LED A LARGE, COMPLEX ORGANIZATION OF OVER 600+ PERSONNEL AS A COMPANY COMMANDER IN THE U.S. ARMY. AFTER HER SERVICE IN THE U.S. ARMY, SHE GRADUATED FROM HARVARD BUSINESS SCHOOL AND HARVARD LAW SCHOOL BEFORE MOVING TO HOUSTON TO PURSUE A CAREER IN ENERGY FINANCE, WHERE SHE WORKED FOR THE LAST FIVE YEARS ON THE EXECUTION OF BILLION-DOLLAR TRANSACTIONS AS A STRATEGIC ADVISOR ON MERGERS & ACQUISITIONS AND CAPITAL MARKETS FINANCINGS. FROM HER EXPERIENCE IN ENERGY FINANCE, ALEX IS READY TO RESTORE FISCAL DISCIPLINE TO HARRIS COUNTY BY BUILDING AN EFFICIENT AND EFFECTIVE BUDGET.