Today, the world faces the scariest China ever—more terrifying than when the Mongols ruled the land. Caucasians are familiar with the Mongol spread, for it reached as far as Europe. Mongolian Yuan China was oppressive, for the Chinese were kept under the thumb of the northern Khans. The Khans instituted high levels of taxation in a sprawling empire that by and large coalesced as the religious culture known today as Islam. It is a faith defined by taxation habits including jizya (additional payments mandatory on Jews and Christians), and prohibits the awarding of interest to those who invest money.

The Khanate no longer rules China. But there’s little to celebrate. The Chinese today are kept under their own thumb. There are two Chinas (the People’s Republic of China, and the Republic of China), and both languish in horrid situations utterly of their own making. The PRC kills babies, produces toxic foodstuff, synthesizes coronaviruses, and massacres its own citizens and the world’s peoples. The ROC meanwhile is being overrun by progressive forces that wish to convert Taiwan into a Japanese island.

Two Chinas. 1.6 billion persons in the Chinese race. The stats are numerically impressive, but it does not automatically signify some sort of cultural prowess. How can it? The PRC is a communist monster that deletes ancient Chinese culture, deliberately—just so that no Chinese person will respond to the gospel when it comes. 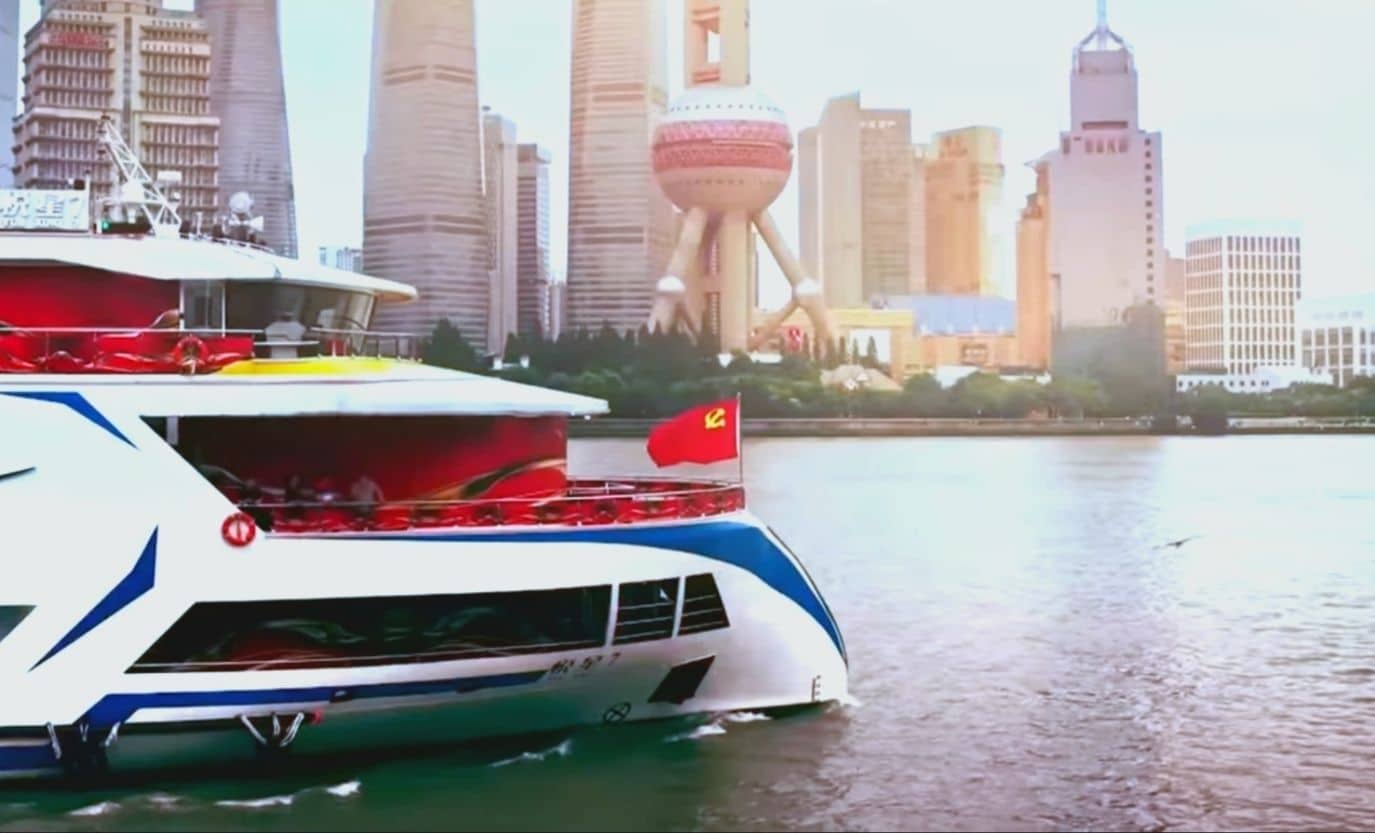 Shanghai, in the year 2021. This is Soviet China as-is, current, real, and starkly defiant. Atheistic, arrogant, and self-assured, the communists know the twenty-first century has its advantages, unlike the primitive and inconvenient sluggishness of Cold War in the 1950s.

Favoring Islamism Above All Else

The communist party knows that the Hebraic echoes and Old Testament customs of the ancient Chinese would have encouraged hundreds of millions of Chinese civilians to join up to Christianity. Therefore, there is a need for the communists to delete classical Chinese values such as the Tao; without the classical sensibilities of the old dynastic ages, modern Chinese will not know what Genesis and Exodus mean when they see these books.

Without Chinese Christians, there can be no future China-Israel alliance. Since the nineteenth century, Christianity has been the strongest thing that connects Chinese people to the Judaic culture of Am Israel (nation of Israel). It has never been possible for every Chinese person to join the Jewish race by marriage; but it is possible for EVERY Chinese woman, man, and child to join the Christian religion. When the Bible becomes relevant to you, you begin to care deeply for Jewish nationhood and Jewish culture. And this spells disaster for the Arab Palestine program.

So you see, the communist party is openly intent on murdering Chinese Christians, tearing down churches, burning crosses, and ripping Israeli flags to pieces. In tandem, the Islamic Republic of Iran is invited into every Chinese province, and radical Iranians are given residential rights in mainland China. Turkish-Arab-Iranian cuisine is elevated as ‘core Chinese culture’—a most dishonest sleight of hand, no doubt; and deviant, radical Arab traditions are being spread around China, to replace classical Chinese virtue. 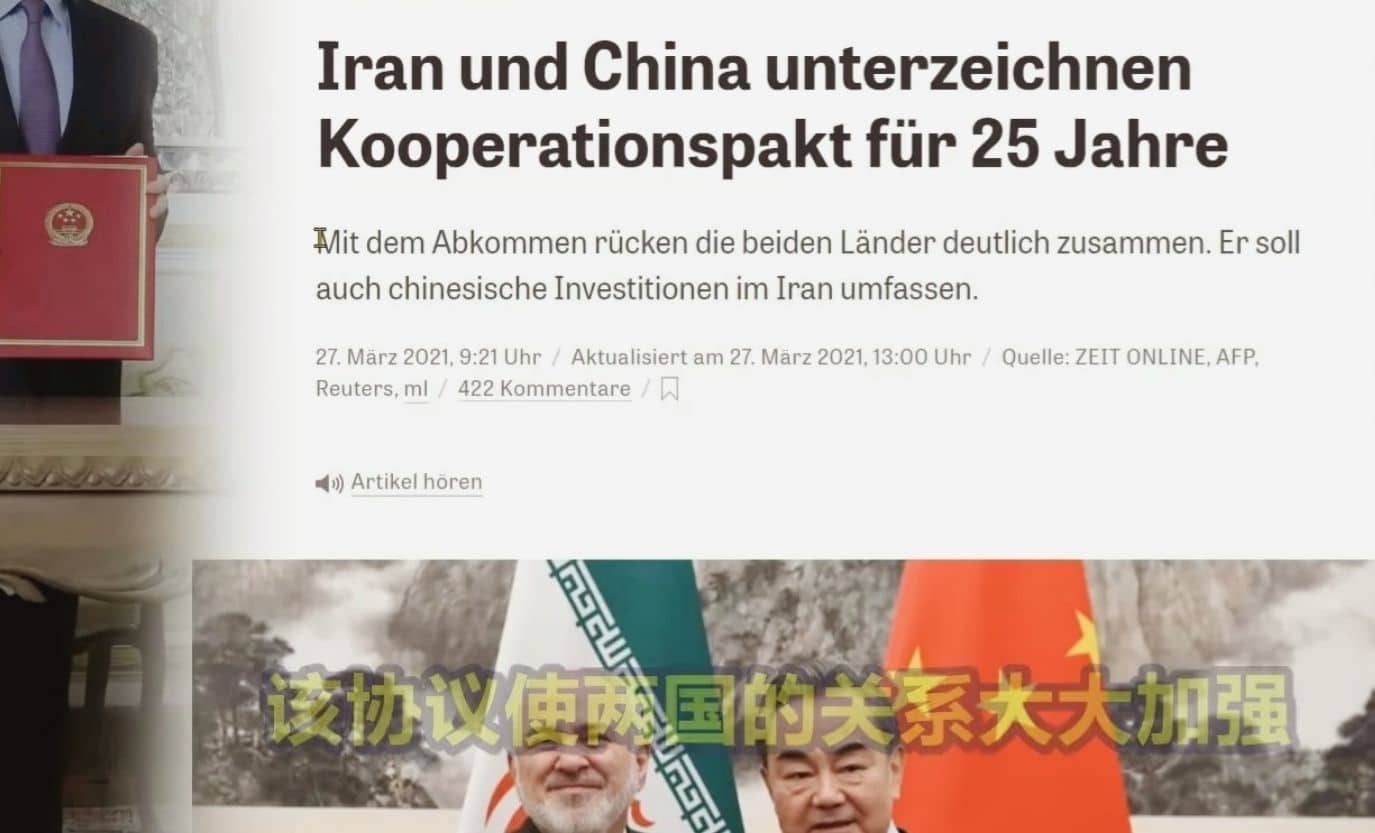 It is 2021, and antisemitic regional powers Tehran and Beijing come together and ink a 25-year deal going forward, to fortify Iran against Caucasian nations, and to help the Islamist government gain access to logistics and assets useful in the mission to destroy Israel and sabotage America.

Classical Chinese virtue teaches the Fifth Commandment (Exodus, Deuteronomy), i.e. honor your father and mother. 慾求仙者當以孝為本—if you want to be divine, love your parents. 孝親報天恩—loving your parents is a way to express your gratitude toward God. The communist party (and any atheist or leftist for that matter) hates this Godly virtue.

Look at how the Democrats have started to ban the words ‘mother’ and ‘father’—for sex is difficult to ascertain (but deepsea submersibles are easy to figure out); intercourse is mere entertainment, disconnected from gender; and children are an afterthought, a burden, and a scar on the earth.

In a glitzy and extremely expensive nighttime celebration of the communist party’s centennial (2021), these words were sung multiple times, indeed tens of thousands of gathered voices in Beijing’s Olympic stadium, “This is my mountain song for the party. When I compare the party to my mother, my mother only gave birth to my body, but the party’s glory is what nurtures my heart,” in a vein obviously identical to Hitler’s philosophy. [ 唱支山歌給黨聽 我把黨來比母親 母親只生了我的身 黨的光輝照我心 ]

This high-definition song presentation was undertaken live with cinematography that rivals PBS and HBO shows, and a budget larger than a year’s worth of Good Morning America television, and broadcasted all over China and in Chinese diaspora communities worldwide. This highly misogynistic song is actually a typical outcome of leftist currents in the past ninety five years of sociopolitical evolution, and is representative of leftism in China and America. 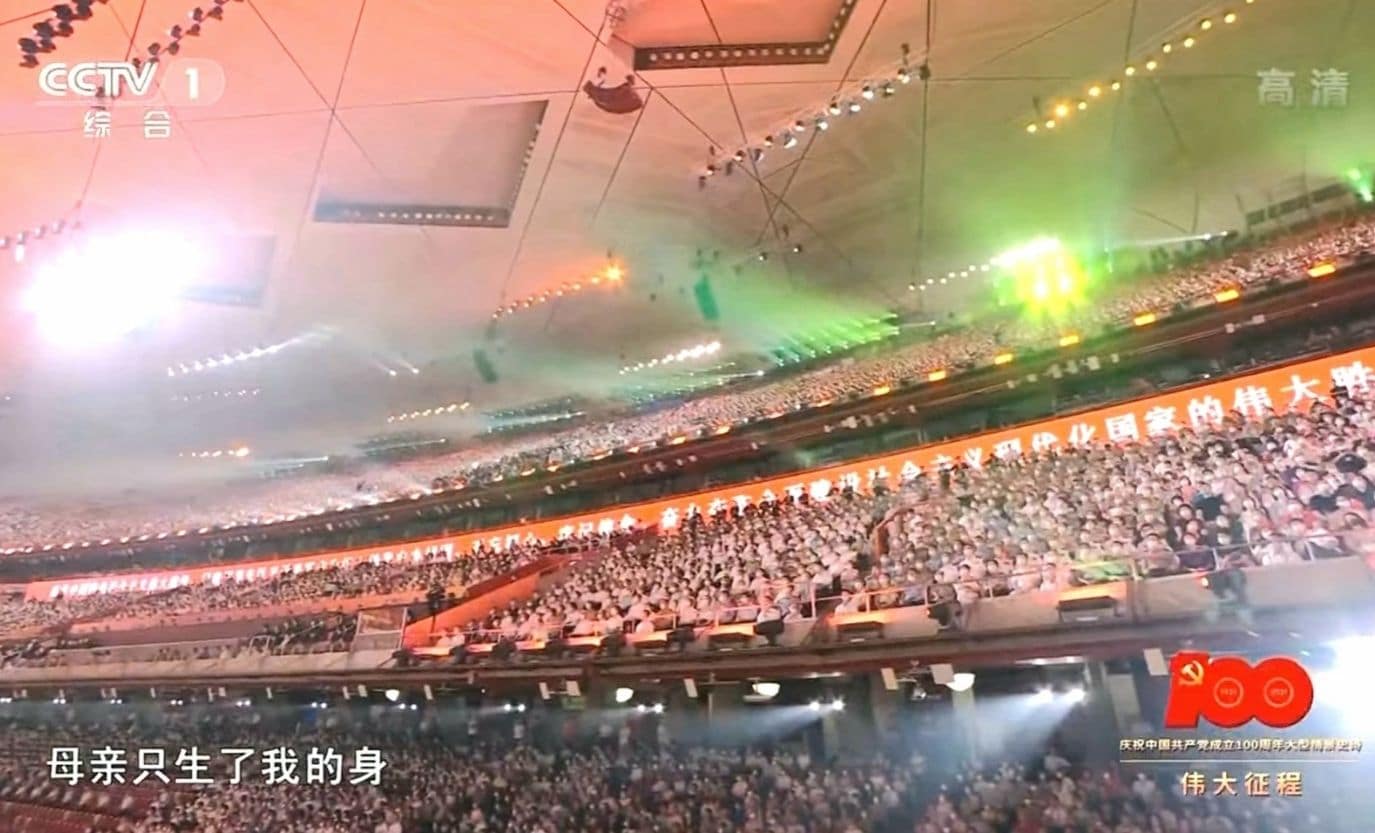 The stadium in Beijing sings in unison, “My mother only gave birth to my body,” and a new word is used for ‘kin,’ purposely removing the orthographic component ‘to gaze’—an exclusion that effectively means you do not have to gaze upon your mother and father, and that you neither have to care for them, see them, visit them nor even look at them. The destruction of family values is characteristic of global leftism.

The Left Is Misogynistic And Anti-Women

In the days of caliphates, the same Arab wisdom taught that mothers were mere birthing vessels (and fields to be ploughed), and the male child was to have ultimate supremacy even over and above his own mother. That horrific tradition informs radical Islamism today, which explains why there are bold commentators in the West who regularly point out the terrible plight of women and girls in Muslim environments.

Democratic Party rhetoric in America posits that women be referred to in first instances and continuous usage as ‘birthing persons,’ or ‘persons who menstruate.’ Seasoned columnists at Katy Christian Magazine have catalogued these horrible Democratic attitudes this year. Hitlerism is clearly reductionist, i.e. it reduces human beings to mere units of human resource. The socialist attitude is habitually animalistic in its sensibilities, and regards people as mere meat.

And thus, what are men? Cannon fodder, heavy muscle, and persons who ejaculate. The popular Left insults men this way, and gives a two-pronged approach in the crushing of men: the human male is a mere sex animal brimming with ugly impulses; and, he is only desirable when he is useful. Socialist forerunner Adolf Hitler was especially bold: he created an artificial cause, and sent Caucasian men off to die for ‘glory,’ ‘struggle,’ (very Darwinian), and national socialism. Hitler often claimed of an immense love for Germanic peoples; he was clearly lying. 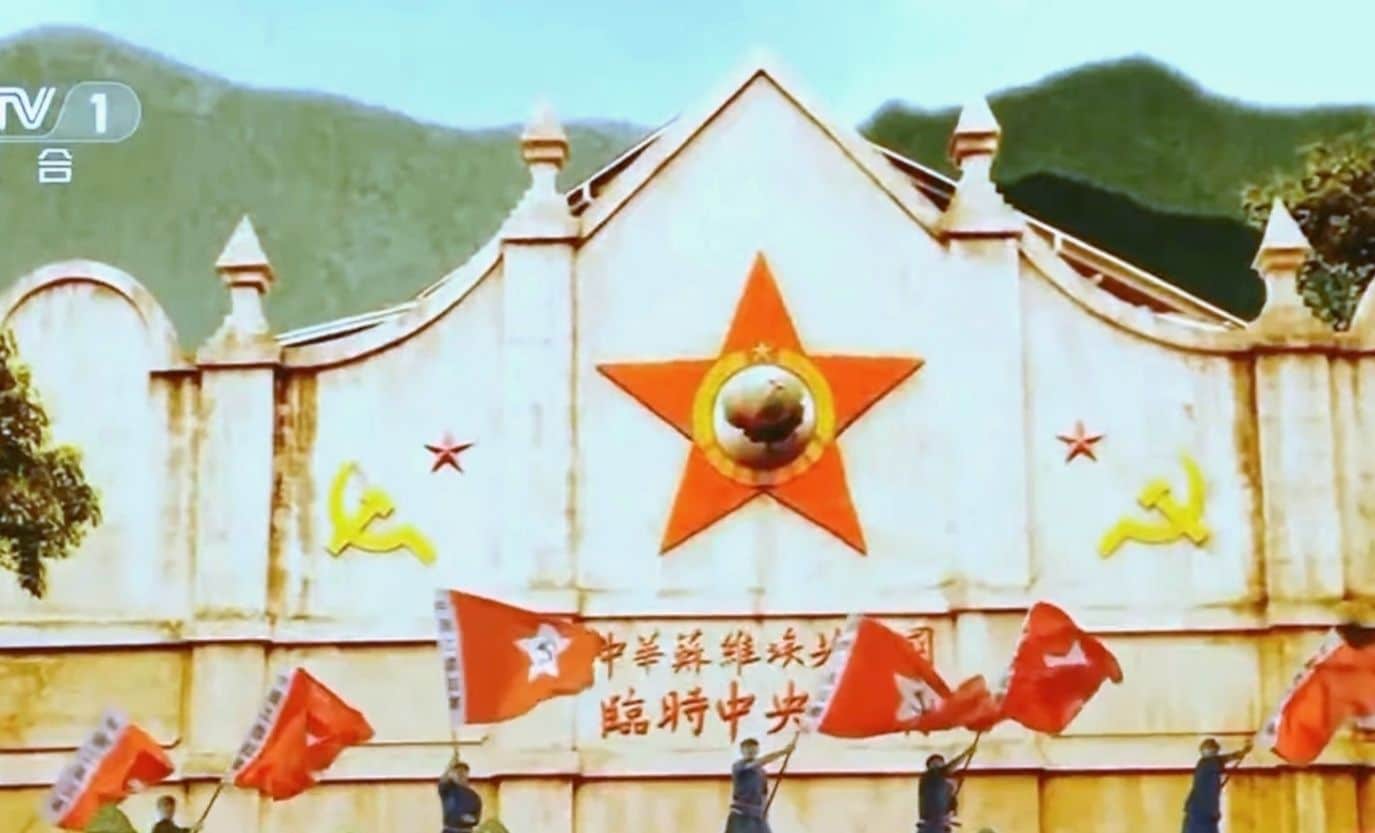 The National Socialist (Nazi German) and Communist Chinese Soviet movements are virtually identical. The fervor of 1930s socialism is here commemorated at the Olympic stadium in Beijing, July 2021.

Tens of millions of Arab and Chinese women stand with radical Arab organizations and the communist parties, a phenomenon that of course boggles our mind in the free world. There are radical Arab women who go the extra mile to suppress other Arab women; in addition, Western-educated Arab women voluntarily sign back in to radical causes, even if it means a Fatah garb instead of a Hamas one. Arab Palestine has clubs, like a warped Hogwarts of sorts. Fatah is more glamorous, a house for modern radicals, while Hamas is way more medieval.

The internal cyclical reinforcement of the antisemitic Arab Palestine movement brings every Arab person to eventual happy submission to the Arab Palestine program, and the overthrow of Israel.

The People’s Republic of China is the scariest version of China ever, precisely because it has no inclination to stand with Israel and America. The PRC has removed Bibles from bookstores, fabricated allegations against believers, and put pro-Western citizens in jail. Israel and the Jewish people are criticized with the harshest vitriol, and the Arabs and Arab Palestine are deceitfully described as docile doves and harmless softies trampled underfoot by Jewish juggernauts. Such is the way socialist media fortifies Hamas and Fatah, and, for fans of anti-Jewish messaging, Hitler is so avenged.