When Bible teacher Wes Pogue was given a piece of advice, he took it to heart, embarking on a journey of self-discovery that brought him full circle…only better.

Pogue had left full-time church ministry to teach at Fort Bend Christian Academy. The principal who had hired him, David Hook, took a chance on Pogue, who had no teaching experience but knew the content and loved students. His piece of advice? If you want to be a great teacher, you have to be a continual learner.

Pogue thought about it. What could he undertake that would provide a challenge in an area in which he knew nothing, and how could he make it meaningful to his life?

He decided to learn to paint, and the object he chose was from a photo he admired of Split Rock lighthouse in Minnesota. “Lighthouses are particularly meaningful to me. They are a reminder of who I am and who I’m supposed to be,” Pogue explained. “I always wanted to be a person who shines light into others’ darkness, to help others avoid the rocks in the water.”

Especially unique to this photo was a rock formation that Pogue noticed formed a cross. With an affinity for lighthouses and his new classroom needing some artwork, it seemed like the perfect portrait to paint. “I wanted it to be something that if it was going to be part of my teaching journey, it would go in my classroom. Lighthouses were everywhere in my classroom – in fact, I had 400, including books.”

He solicited the help of his students and fellow teachers to get started. The students helped him with the canvas and art teacher Robert Sanders taught him the basics, moving from dark to light, adding in elements piece by piece. When he added the light, he wanted a sunset vibe, but he wasn’t happy with the results. It didn’t feel right, and he put down the paintbrush.

“For whatever reason,” he said, “I stopped working on it. But that’s okay because we are God’s masterpiece and he’s still working on us. We are all a work in progress.”

The painting stayed that way in his classroom for years. 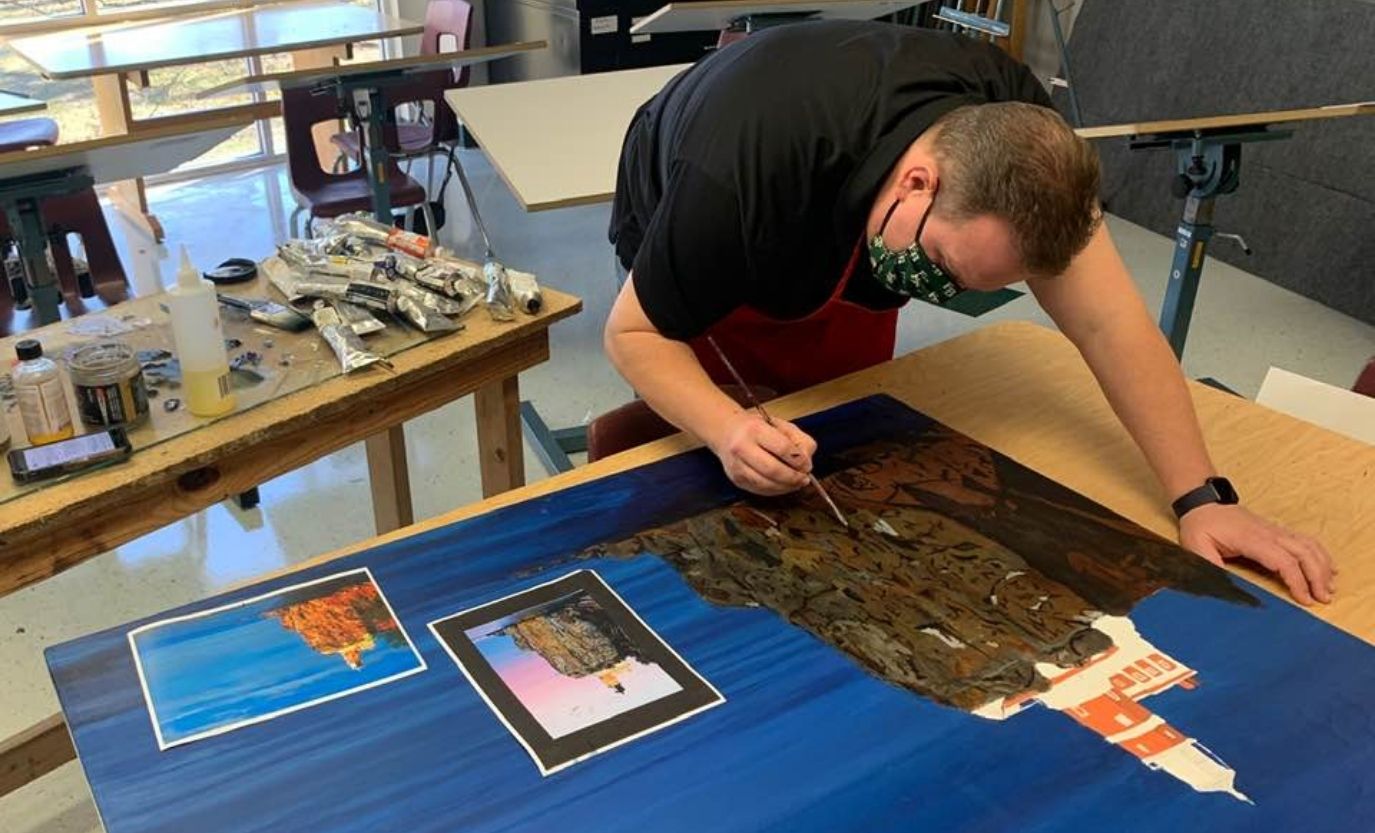 It followed him to his new office when he was named school chaplain, until one day a friend said to him, “You need to finish this. It’s incomplete. It’s time to finish.”

So Pogue started back up in January 2021 with the decision to change the sunset he never liked to a sunrise. “At points, I was so frustrated that I wanted to throw away what I had and start over. As I kept working, adding and changing colors, I noticed that the cross that was so important to me at the beginning was beginning to fade out of the picture. It presented a huge, insecure moment for me. Is that what was happening in my ministry? I wanted to do it right and I felt I was completely screwing it up.”

But support wasn’t far away. Art teacher Ryan Baptiste encouraged him and talked him through it. “I think God was beginning to nudge me away from FBCA, and that painting was revealing things to me. As I added trees and added in life, something that wasn’t in the original picture, it completely changed the painting. In the last couple of weeks, I grew more confident and started adding in touches and learning brush strokes. I was doing stuff on my own and making decisions and choices and seeing the impact. It all began to look real, it became 3D, as I saw it come to life. God was showing me how to be a painter…and also showing me what I should do next.” 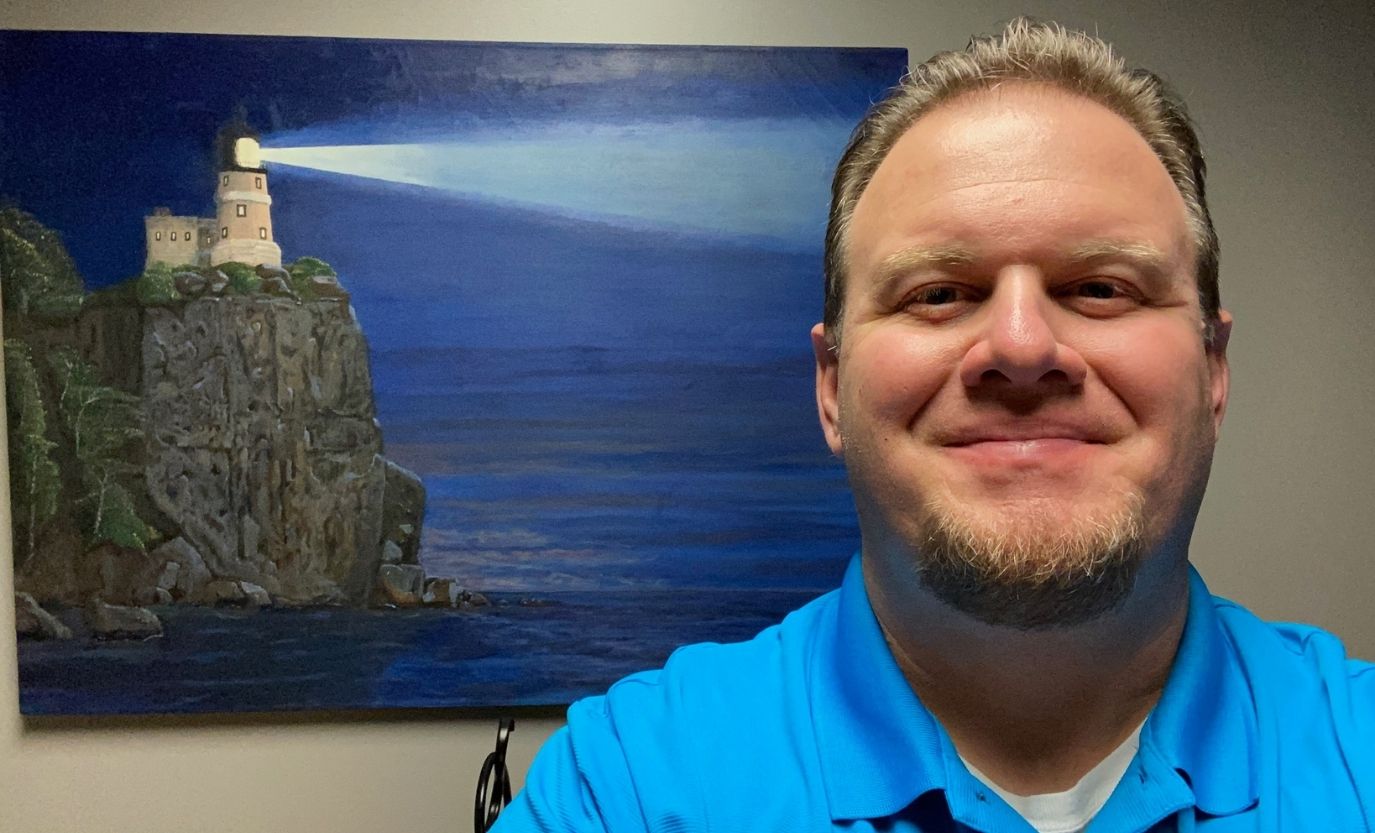 Next turned out to be accepting a position as Associate and Family Pastor at Sanctuary Fellowship Church in Richmond. Pogue explained what led to the decision. “Every aspect started with what seemed like random conversations that were actually orchestrated by God. I decided to leave somewhere I loved and return to something that my gifts and talents could serve.”

Pogue points out that his artistic journey – just like his challenges and decisions in life – did not come easily. “I genuinely felt like I was making mistakes all along, but it’s life. It’s a journey. I’m returning to church ministry after 14 years. When I came to teaching, I was broken and I felt that my former identity as a pastor was gone. The first 6 years I was cutting grass one night a week so I could afford to continue to teach while supporting 5 children. But during those 14 years in the classroom, I figured out who I was.

“The things that have always been true about me are even more true now. I want to shine light, but I’ll never be the brightest light. When I changed my sunset to a sunrise, it was obvious that although the lighthouse helped to lead the way, it was really the sunrise that lit up the sky.”

Will Texas Soon Audit Its Most Populous Counties for Voter Fraud?