In classical Chinese, which is the noncommunist kind, there is a proverb that finishes with the Jewish concept of tikkun olam, pingtianxia; it goes like this: 修身齊家治國平天下 xiushen-qijia-zhiguo-pingtianxia. Train your heart, build a family, organize the nation, and bring enlightenment to the world. This is very Taoist, unmistakably Christian, and beautifully Jewish. There is no chaos in this proverb, only love.

It is true; I’m in love with God. It would have been hard not to fall in love with such a great Progenitor. Pundits sometimes like to say such a love impairs politics, which is of course a lame claim (heh, that rhymes). Only a love for God fosters in your heart a love for people. An atheist has no truthful reason to love and serve people.

I think on God all the time, and it has become like breathing: effortless and symphonic. I yearn for Him, and that propels every deed I commit to. Goodness is worth defending, and terror is utterly unacceptable. It is obvious such a moral compass derives from an ardent love for Jehovah/Hashem/Abba Gadol, our Father in Heaven. ( יֶעֱרַב נָא שִׂיחִי עָלֶֽיךָ. כִּי נַפְשִׁי תַעֲרוֹג אֵלֶֽיךָ. ) 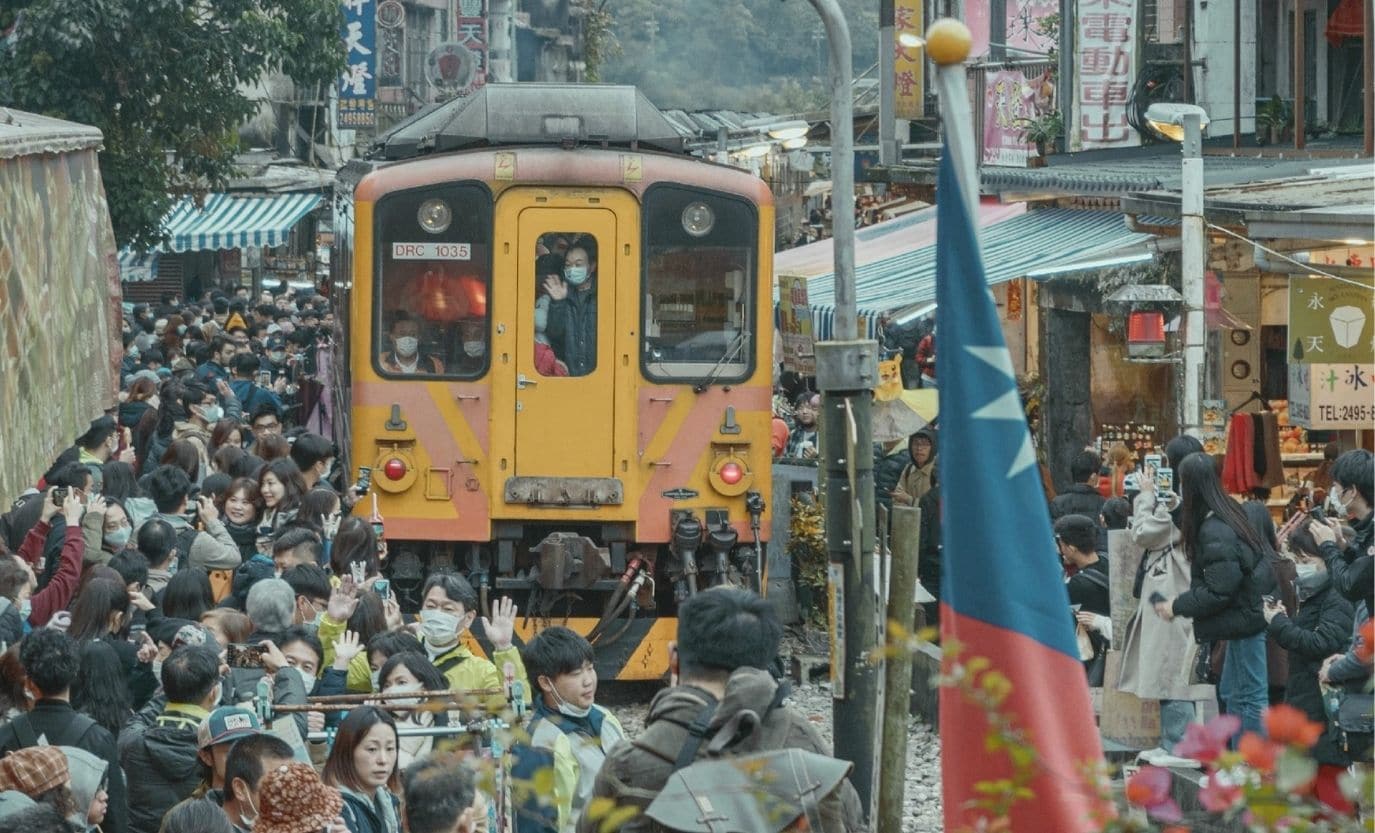 An older rail line in Taiwan and a novelty tourism locale that attracts crowds. The Orientals in Taiwan enjoy the Republican principles of government of, by, and for the people. Their biological kin in mainland China are not so lucky.

I spent several days scouting downtown Johor Bahru City—a mere mile from Singapore island—for an ideal location for the future Embassy of Israel in Malaysia. Malaysia is inundated by the toxic of antisemitism, due to pro-Palestine activism and politically financed terror among Malay-Muslims and their Arab Fatah and Hamas/Beijing enablers, but these bad guys can’t win if good folk stay the course and project Israel to the world. There will be an Embassy of Israel in Malaysia, because it is possible through strength of will and purity of resolve to nudge the 23 million-strong Muslim community away from international terror.

Transitions are important. Moving upwards toward goodness and beauty and truth: this is always good. Muslims must come to embrace that. The West Levantine issue is that the location is Israel (a nation), not Palestine (a province). Palestine extremism and Arab imperialist belligerence must, in the near future, depart from Malaysian society, and consular ties between the Federation of Malaysia and the State of Israel joyously fostered. 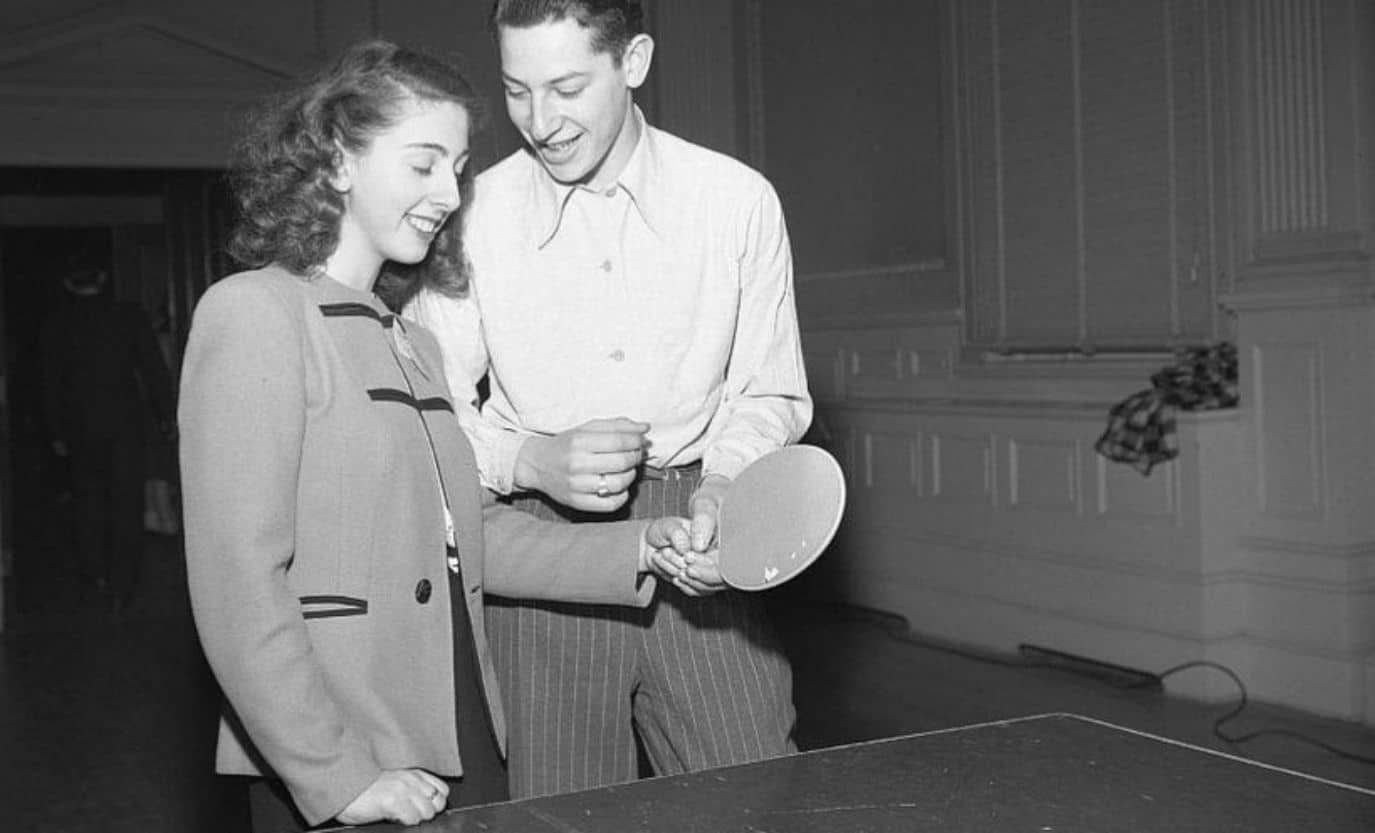 Two Jewish persons at table tennis in an era when the classical Republic of China and the State of Israel were accepted as norms in a post-WWII paradigm. Today, Communist China and Arab Palestine are offered as new normals in a postmodern and meaningless world.

Thankfully, we have precedents for successful transitions in the sociopolitical sense. A lot of it is wrapped up in political parties and their correspondingly apparent sovereignty tussles, but the simple conclusion is that this is a battle between good and evil.

There were two Americas at one time, and between the Confederate States of America and the United States of America, only one possessed the moral right to American sovereignty. It was in effect a struggle between the Democratic Party and the Republicans. However economically well-reasoned the newly created CSA was in keeping African Americans enslaved without pay on estates, that could not last in the Lincolnian drive to uphold the ethics of the Bible (the Hebrews yearning to break out of chattel slavery, the New Testament mission to set captives free, and the insistence that people bonded to you are to be regarded as brothers).

Between Palestine (Hamas, Fatah) and Israel (Likud, Yamina), only the sane will choose Israel. Is Israel the winning team? In the eyes of what is good, beautiful, and true, of course! Picking Israel today is exactly the same as having stood with the USA in the 1860s. The Civil War was a baptismal lesson in the struggle between values, and all the later scholastic excuses of economics, power, ego, and parochial sentiment do not make sense. While there is a tangible sort of nostalgia for CSA lore and livery, and a trendy desire among leftists for the dark emo flag of the Arab Palestine movement, these things are a mere dabbing in the terrorism of militant counterculture, and cannot be considered sensible in the discourse of peace. Indeed in the interest of peace, we defend freedoms of expression, and give an unlimited amount of space for CSA and Palestine ideas to roam, but that does not mean these ideas are correct.

There are indeed two Chinas, facing each other across the Straits of Taiwan. The Chinese Civil War isn’t over. Two political parties, and therefore two Chinas. People’s Republic of China (Communist Party, Beijing) versus Republic of China (Kuomintang, Taipei). The equation is literally that simple, and everything from substandard foodstuff to coronavirus terror comes from the fact that the Chinese Civil War is ongoing, and the nation is split between Communists and Kuomintang Republicans. To invalidate the Kuomintang, the Communist P.R.C. does everything it can to ostracize Taipei. 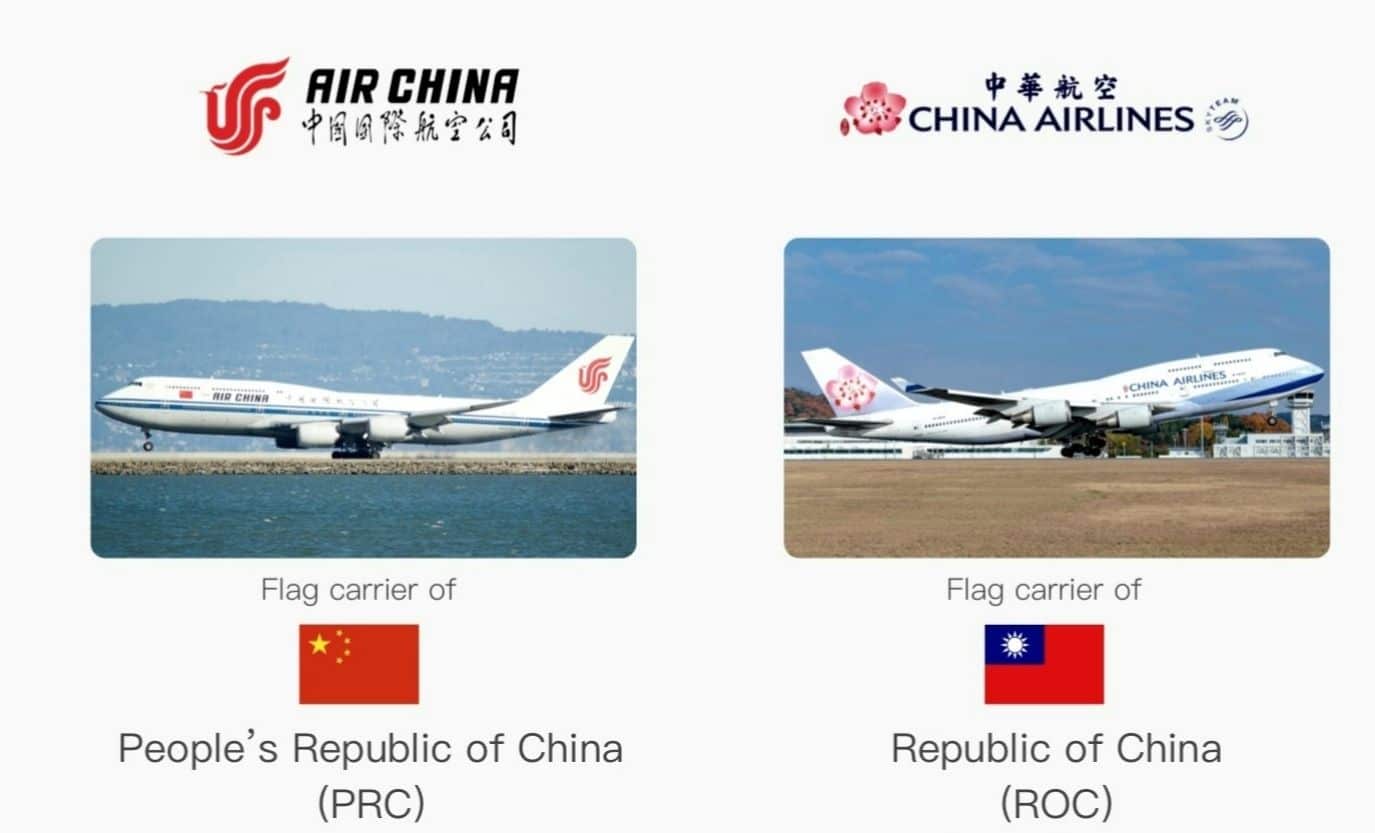 To paraphrase Geoffery Chang, there are indeed two Chinas especially if you jet about often enough. [creativecommons.org/licenses/by-nd/2.0/]

The Civil War is now in its centennial year. This unresolved issue has provided the last straw on the proverbial camel. Communist administration has taken this War to the world, to kill off American, European, and Israeli viability by wiping out Caucasian persons en masse, just so as to prevent the restoration of the Kuomintang R.O.C.

Mao Zedong (Communist) said it best, “I will fight Heaven, and fight the masses as well.” To wrest territory from old China and create a Soviet country, Mao collaborated with the Axis (that is, Nazi Germany, Japan, Italy, and frontier Muslims) and pushed back against Britain and America. Mao the maniac dispatched civilians northeast to help create a Communist pseudostate (North Korea), thereby propping up the Kims we know and fear today. He armed the PLO (Fatah) and constructed a blueprint for the creation of Hamas and Iran (to replace Persia). Palestine triumphs only because Beijing helps it. Without Beijing, Palestine cannot persist.

Chiang Kai-shek (Kuomintang) was the boldest character to have ever challenged Mao. Mao received backing in the form of Democratic Party assistance, so Chiang was repeatedly doomed to lose. But Chiang was vocal, and reminded the world, “The defeat of the Axis, and the victory of the Allies is indeed a sacred ensign of God’s almighty goodness in the face of evil, and Christians should take heed in this, and feel proud of Him our Sovereign Lord. We must have confidence in our fight against terror.” Chiang’s Christianity, like that of R.O.C. president Sun Yat-sen before him, is a diametrical opposite to Mao Zedong’s angry atheism. 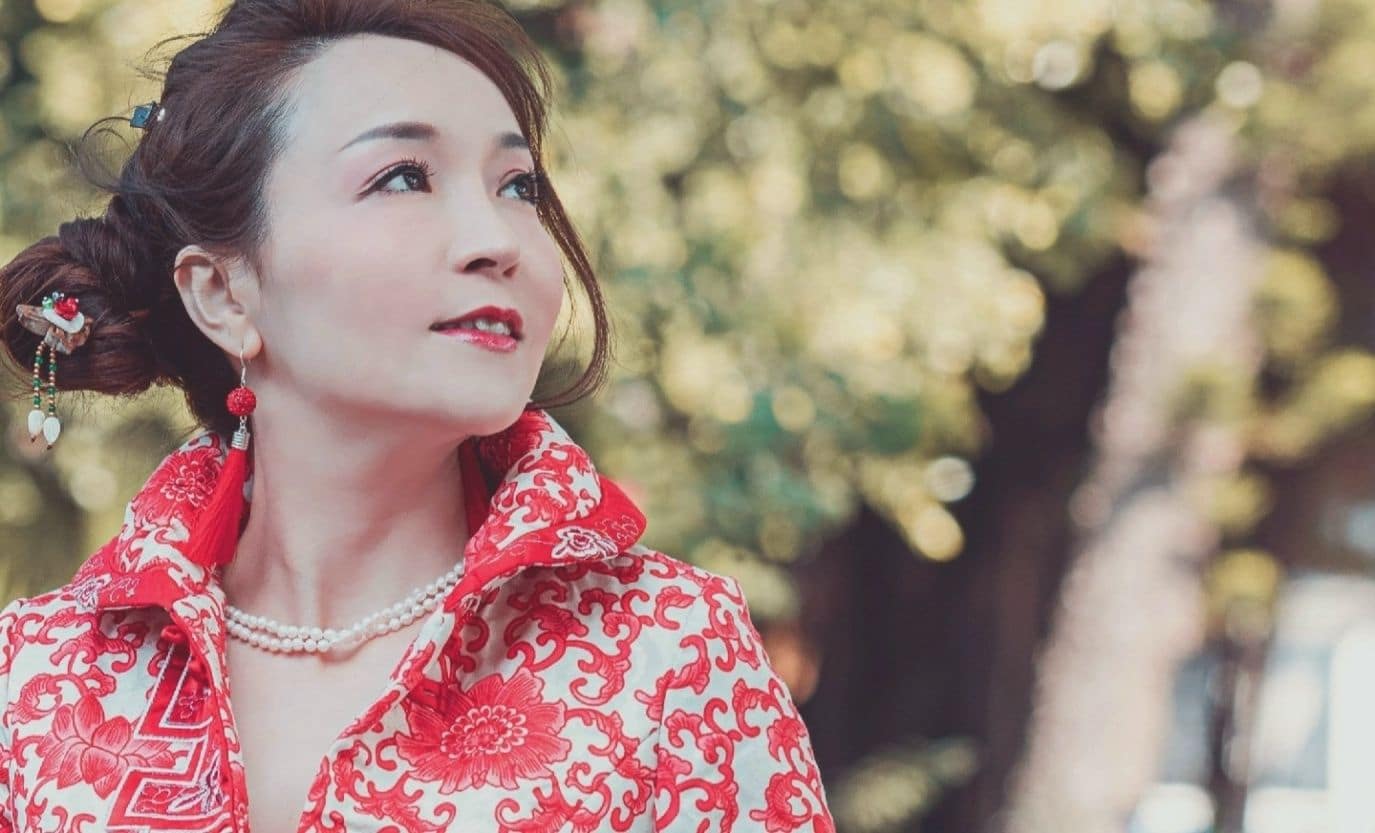 Outdoors in the Republic of China, colloquially known as Taiwan. The Taiwanese archipelago features some of the highest indices for Christian adherence in eastern Asia, second only to South Korea. The sociopolitical endeavors of every Jew and Christian must be to secure the ROC against PRC hegemony in our time.

Mao the madman is the fanatical reason for the antisemitic power known today as Communist Beijing, which continues in 2021 to threaten the world in actual verbiage; this summer Xi Jinping issued from his very lips a Declaration of Bloody War against Republican America. Only dishonest diplomats in Democrat and Beijing camps have the audacity to sugarcoat that and deny the toxicity of such militaristic venom.

Covid-19 has accelerated the corridors of time for a definitive showdown between good and evil. The stage is set. As Jewish persons and Christian adherents our love for God must go forth in deeds both mundane and monumental. Our politics must represent the goodness we cherish. The United States, the State of Israel, the Republic of China, and an Embassy of Israel in Malaysia…. these are worthwhile things. Against these are arrayed the forces of leftist militancy, indeed of Palestine, and the People’s Republic of China, and ‘woke’ tidal waves at home in America.

οτι ουκ εστιν ημιν η παλη προς αιμα και σαρκα αλλα προς τας αρχας προς τας εξουσιας προς τους κοσ οκρατορας του σκοτους του αιωνος τουτου προς τα πνευματικα της πονηριας εν τοις επουρανιοις—The same epistle reminds us that we are tasked with the real and social responsibility of going up against vicious principalities and evil sovereignties, and that there is no way to cower or hide from such terror. Beijing and Fatah are high places, and you feel helpless and defeated, but through it all, stand, speak, and never surrender.

All Hope is Not Lost for America - Perspective from a Gen Zer!