The Xi Jinping Government has made left-wing Malaysia a proxy of Beijing’s atheistic, communistic, and ultimately Islamist interests—all of which do not ruffle the feathers of Biden-Kamala America, for the doctrines of pro-Muslim ‘diversity’ and evolutionist atheism are indeed in vogue today. The masses are swept up in the permissive popularity of anti-Jewish hatred (often disguised under semantics and clever sloganeering). In the middle of it all, Arab Palestine is the most celebrated cause, and a rallying banner for all leftists.

The only victims of the hegemony of this global leftism are the innocent families of America, the nation of Israel, and the olden Republic of China (sheltered in Taiwan). These beautiful features of a holy past are being ingloriously maligned and thrown onto the garbage heap of outmoded ideas. The goal is to invalidate the family, delete the Jew as a race, and eliminate all opposition to Beijing.

Left-wing Malaysia has recently clamped down on independent diaspora Chinese media; the persecution mandates that these media personnel STOP referring to Hamas Arab Palestine as radicals and extremists, and that reporters and journalists should OBEY Beijing’s support of Arab Palestine. These are actual human beings, indeed Malay Muslims and Communist Chinese, who accost and confront independent media, to shut freedom down. 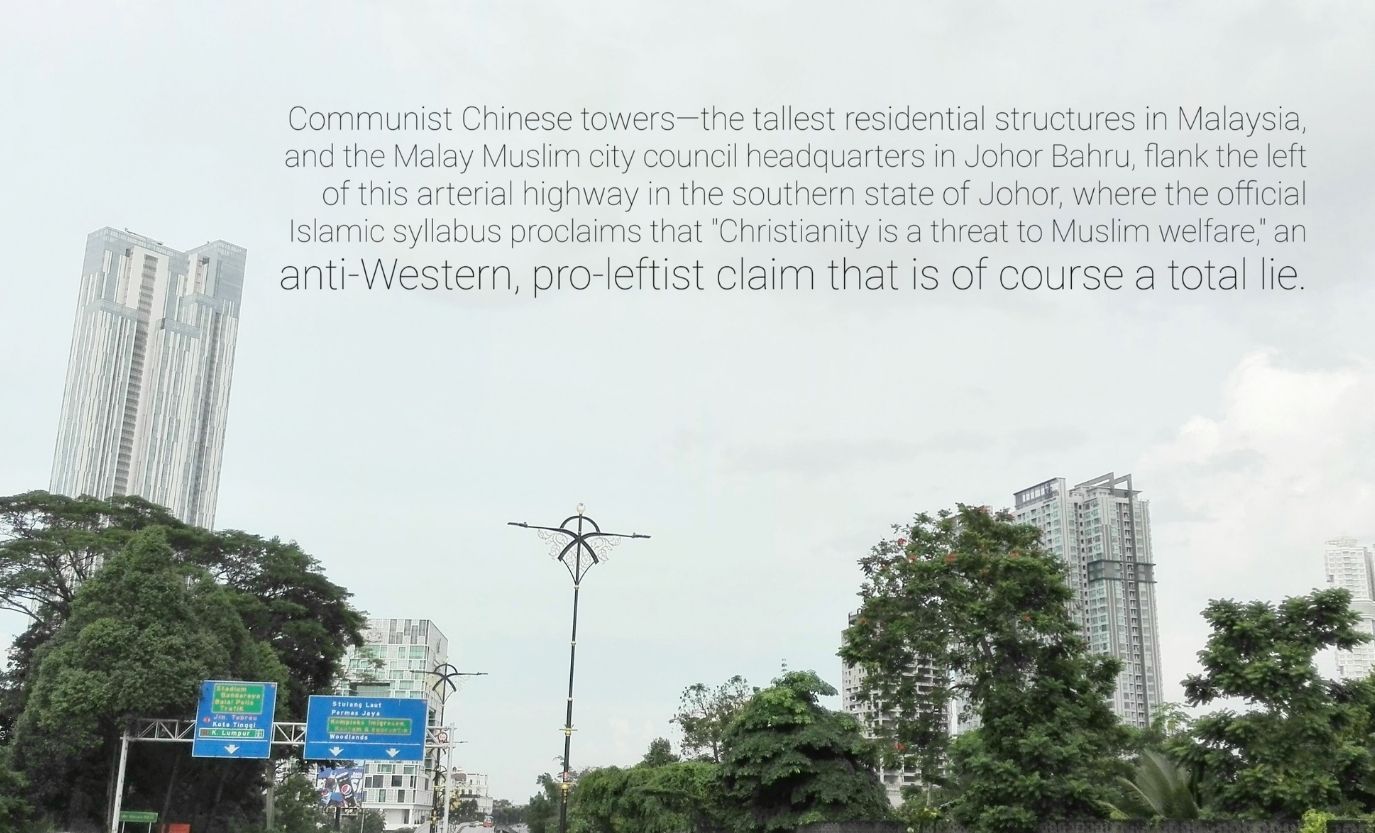 Antisemitism—or anti-Jewish, anti-Israel, anti-Zionist sentiment—is presently spreading as wildfire in dry woodland. Arab Palestine imperialist flags adorn vehicles, and annihilationist vitriol is shouted on streets and in mosques and online, by Malay Muslims in both Pakatan and Perikatan configurations. Islamic Chinese, such as pro-Beijing grassroots leaders of the Malaysian Chinese Association in Malaysia’s south, laugh at Jewish identity, and threaten physical violence and arrests against republican Chinese.

Islamic Chinese T Y Au, on occasion offering himself in taqiya as a Christian, quipped in a matter of five minutes and a pompous display of sordid wordplay, that the Jews are essentially Joos or Heebs (his reliance was on creating an unnatural but successful aural-visual logographical game between yoú 猶 and dí 笛, in the Chinese language). For years he had boasted of one day heading the diaspora Chinese community in Malaysia. That community comprises seven million persons—a noteworthy ambition, and a diabolical one for a Farrakhanesque antisemite.

Chinese civilians would only suffer under antisemitic leadership—Steven Goh, also in the south, has threatened arrests and indefinite imprisonment against me, for the fact that I “proclaim Jewish governance for Israel,” I quote. Ang Tun Chek claims that “the upper echelons of the Malaysian Chinese Association do already support Arab Palestine,” and that these echelons want me to vanish and die; indeed he has fashioned gag orders on me, and warned me that I “cannot win because I have no supporters,” his words.

Zionism—that is, love for Mt. Zion, Jewish sovereignty, Israel, and the Jewish people, is daily threatened this way by Muslim radicals and Communist Chinese. This vicious development constitutes part of a sociocultural emergency in Malaysia, formed on the backdrop of the national State of Emergency declared by the unelected Prime Minister after having filibustered the King. The Emergency severely curtails all aspects of civilian life, and further compounds a nationwide lockdown that prohibits departures from Malaysia. 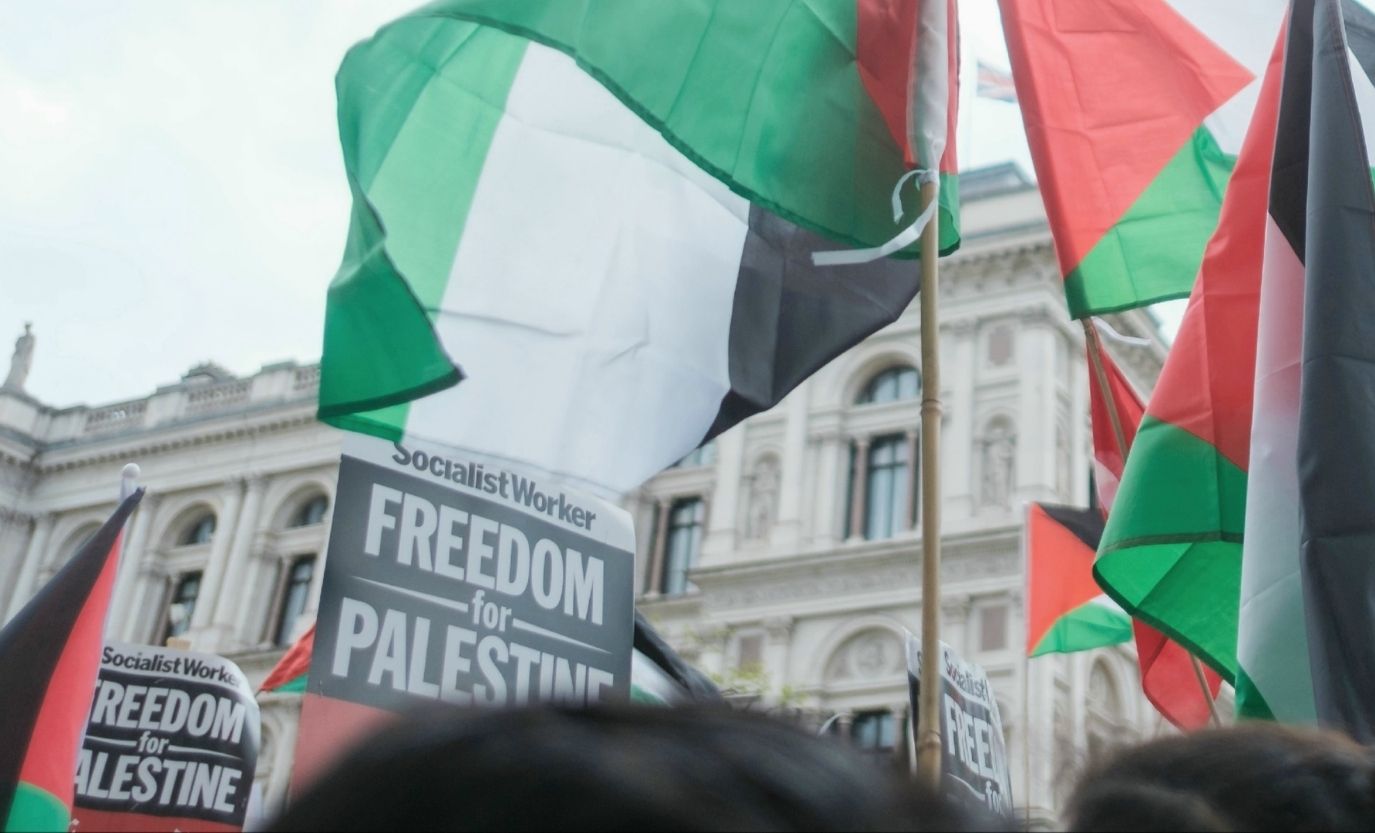 Demonstrations this year in support of Arab Palestine, in Britain where the radical Islamist agenda has significant influence too, by way of British accommodation. EU-era Britain tragically enabled an importation of terror to the island, and prior to that, the modern creations of Arab Transjordan (i.e. Jordan) and Palestine were already in place as strange products of British power.

The Violent Opportunism of Communism in Malaysia

Steven Lai Tai Onn publicly supports the People’s Republic of China, and denies the existence of the Republic of China. Such denialism is identical to the global war on Israel, that denies her existence, and promotes the leftist, artificial construct touted as Palestine. Lai Tai Onn has made grave threats against my kin, and lecherously insults Caucasian women as well, including Jewish women.

When the Arab Palestine project reached out to the ranks of the Malaysian Chinese Association these past 18 months, it was to seek out friends and allies for the Hamas takeover of Malaysia. That there are major public figures in this English-speaking Southeast Asian country today that receive finances from terror groups and in reciprocity finances them as well, shocks any moderate soul, for the radicalization of Malaysia will only put her further from the sensibilities of the UAE and Bahrain.

Laying on torrents of profanities and vulgarities across the months, David Loh Miang Soon has additionally called my support—for Zionist and Chinese Revivalist Sun Yat-sen, the classical Republic, and the rightist-conservative America I love—nothing short of “demonic,” “dirty,” and “retarded.” These are precisely the same labels Nazis used on Jews in the lead-up to WWII. While I am indeed taken aback by Loh Miang Soon’s rhetoric, I am not utterly surprised. National socialism and Soviet communism, very much like any Hitler-Stalin pact, are entirely predictable and do not change over time.

Sovietization, Chinese Suffering, and the Confidence of Leftists

The Sovietization of China since 1949 has wrought horror upon Chinese civilians, and still these hundreds of millions are every day oppressed by ardent leftists in the homeland and in the diaspora. Chinese people in Malaysia should not need to kowtow to Beijing, but Biden’s orchestrated triumph has only emboldened Beijing to clamp down on Chinese people outside China.

In Malaysia the Democratic Action Party (ethnically Chinese) and increasingly the Malaysian Chinese Association are being anchored in ‘liberal democratic’ customs that aim to do just three things: negate the sanctity of life, destroy the Jewish State of Eretz Israel, and replace it with Arab Palestine. Beijing’s military power is the only significant strength bolstering this global political mission.

Instead of confessing the error of their ways, leftists employ a simple oft-repeated line as old as the history of antisemitism itself; in Chua Ching Hao’s words, “the Jews are rich, are based in America, and pay Israel to exist,” which is a textbook verbatim mirror of the concept of an international Jewish conspiracy.

Such voices that helm sections of the Malaysian Chinese Association (MCA), and stand as thought-leaders and trendsetters in overseas Chinese communities, frighten Western investors, and move Malaysia into the realm of pariah states. Entirely lacking in empathy with Jewish destiny, and opportunistically drinking deep at the fount of Beijing’s money, these are pro-Arab, pro-Palestine Chinese communists in Malaysia’s south who thrive splendidly, and foster anti-Jewish sentiment so as to carry forth momentum for a final war on the West.

Can You Get Fired for Refusing the COVID Vaccine?