In this, Part 4 in our review of Isaiah 18, we look closer at some of the individual identifiers of this mysterious nation.

A Land of Rivers

2 … whose land the rivers divide.

Once again we wonder … why mention a particular feature if that feature is not important and significant? It is a feature worthy of noting.

So, what about this? Does America have a significant number of rivers to fulfill this prophecy?

According to the U.S. Geological Survey, “The United States of America has over 250,000 rivers, with a total of about 3,500,000 miles of rivers. You could circle the globe 140 times and still not have that many miles under your belt! That’s a whole lot of rivers!”

The Heralding of a Nation

3 – All you inhabitants of the world and dwellers on earth, as soon as a standard is raised on the mountains, you will see it, and as soon as the trumpet is blown, you will hear it.

In the days of the ancient Olympic Games, as nations would enter the stadium in the Opening Ceremony, they would be led by their flag (“standard”) and the heralding of a trumpet as part of what was called a “fanfare.” Each fanfare appearance is intended to maximize the attention and interest of the audience at-large.–

What does America’s “standard” symbolize? What kind of “shadow” does America cast across the face of this planet like no other nation does? How loud is America’s trumpet? Consider this:

“In countries outside the United States of America, Americanization is the influence American culture and business has on other countries, such as their media, cuisine, business practices, popular culture, technology, or political techniques,“ says Wikipedia on the subject of “Americanization.”

On the matter of “Globalization” — and the widespread American influence worldwide, Americans-World.org notes:

“One of the most controversial aspects of globalization is the worldwide spread and dominance of American culture. Just as U.S. goods flooded world markets in the post-World War II era, U.S. culture is penetrating every continent through the dramatic growth of mass communications such as music, television, films and the Internet, as well as through the penetration of American corporations into foreign countries. From China to France to the Middle East, foreign leaders and activists have expressed fear that global culture may become too Americanized, destroying their own cultural, economic, and religious traditions.” 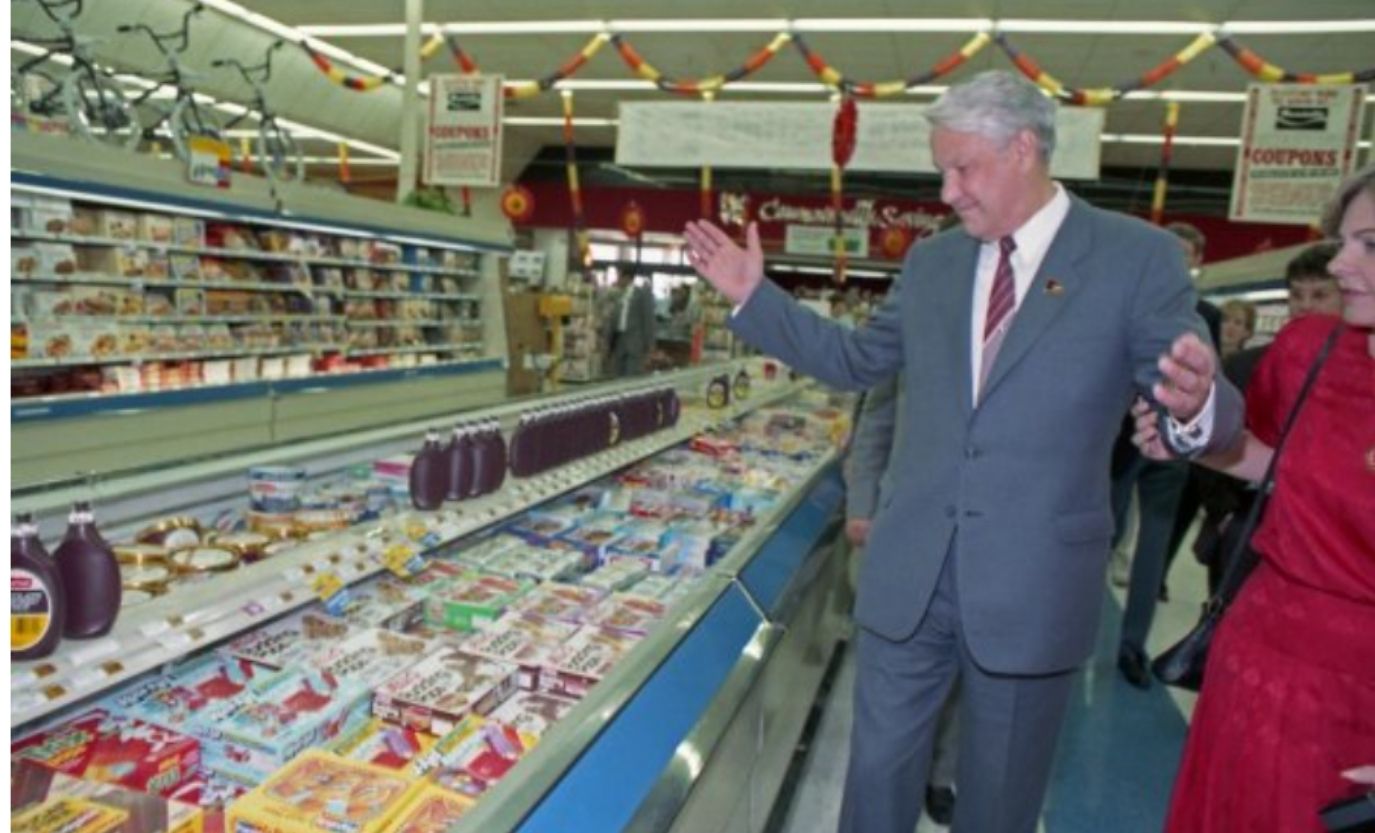 The Visiting Soviet Premier to a Houston Grocery Store

On September 16, 1989, Soviet President Boris Yeltsin visited the Johnson Space Center in Houston. Leaving JSC, he and his troupe made an unscheduled visit to a Clear Lake Randall’s grocery store.

According to the Houston Chronicle, Yeltsin (58), “roamed the aisles of Randall’s nodding his head in amazement. He told his fellow Russians in his entourage that if their people, who often must wait in line for most goods, saw the conditions of U.S. supermarkets, ‘there would be a revolution.’

“Shoppers and employees stopped him to shake his hand and say hello. He asked customers about what they were buying and how much it cost, later asking the store manager if one needed a special education to manage a store. He marveled at the produce section, the fresh fish market, and the checkout counter. He looked especially excited about frozen pudding pops. ‘Even the Politburo doesn’t have this choice. Not even Mr. Gorbachev,’ he said.”

The fact that stores like these were on nearly every street corner in America amazed him. They even offered free cheese samples. Yeltsin didn’t leave empty-handed, as he was given a small bag of goodies to enjoy on his trip.

“’When I saw those shelves crammed with hundreds, thousands of cans, cartons and goods of every possible sort, for the first time I felt quite frankly sick with despair for the Soviet people,” Yeltsin said in his biography. “That such a potentially super-rich country as ours has been brought to a state of such poverty! It is terrible to think of it.”

The New York Times, reporting Yeltzin’s death on April 23, 2007, cited the story of the Russian President’s visit to the Houston grocery store by noting:

“Leon Aron, quoting a Yeltsin associate, wrote in his biography, ‘Yeltsin, A Revolutionary Life’ (St. Martin’s Press, 2000): ‘For a long time, on the plane to Miami (from Houston), he sat motionless, his head in his hands. “What have they done to our poor people?” he said after a long silence.’ Aron added, ‘On his return to Moscow, Yeltsin would confess the pain he had felt after the Houston excursion: the “pain for all of us, for our country so rich, so talented and so exhausted by incessant experiments.’

“Aron went on to (quote Yeltzin as saying), ‘I think we have committed a crime against our people by making their standard of living so incomparably lower than that of the Americans.’ An aide … was reported to have said that it was at that moment that ‘the last vestige of Bolshevism collapsed inside (my) boss.’”

That was in 1989. Upon returning to his homeland, President Yeltzin began the process of reforming his nation in a series of steps that would eventually dismantle the Soviet Union and democratize Russia’s political and economic system. In July 1990, Yeltsin resigned the Communist Party. “In 1991, he became the first popularly elected leader in the country’s history, guiding Russia through a stormy decade of political and economic retrenching until his resignation on the eve of 2000.” He passed away in April 2007 at 76.

Think of it: It was the impact of full grocery shelves and the friendliness of ‘the enemy’ in Houston, Texas USA, that left its mark on this national leader! Such is the legacy of the United States of America! The rest is history!

Isaiah 18:3 – All you inhabitants of the world and dwellers on earth, as soon as a standard is raised on the mountains, you will see it, and as soon as the trumpet is blown, you will hear it.

You’re Invited to A Call to Auction: A Celebration of Literacy