Recently, a young reader of Katy Christian Magazine reached out to us about what it is like for a college student to identify as a Christian and/or Conservative. On the condition of anonymity, we are telling her story due to a fear of being targeted by her peers. This is her story.

Around a week ago, a Vietnamese friend of mine asked me how it feels to be young and white, born in a generation that detests white people. I don’t know if many of our 30+ year old readers are aware of how badly white youth are discriminated against. Anti-white hate rhetoric dominates social media platforms, urging white people to either side against their own race, or to remain silent. I am not exaggerating; it is impossible for a high school or college-aged adult to scroll through their Twitter feed for longer than 20 seconds without running across a tweet like these: 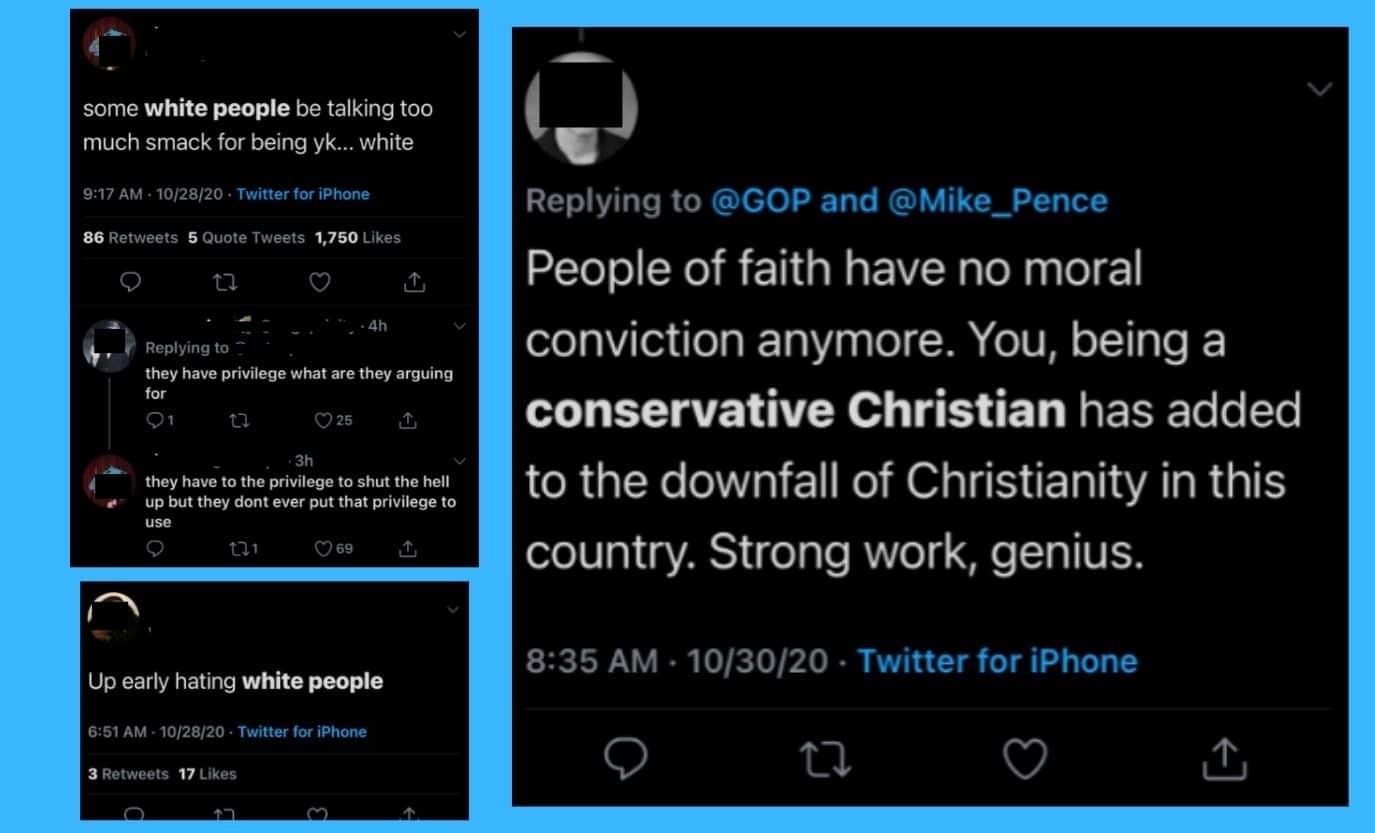 But the issue is much larger than race. My friend’s question led to an elaborate discussion about the current political atmosphere in the U.S. I believe that the left’s hatred toward Christians, white people, conservative-leaning people, men, and the older generations is being puppeteered by the liberal media. The reality is that over the decades, many people of color have been unfairly arrested or killed by those in power. There is a pay gap between men and women in many professions. It’s not as if every grievance is absurd. But the liberal party doesn’t care about these issues at all; instead, they use their media conglomerates to push anti-Christian, anti-white and anti-conservative agendas to secure the votes of the angry, scared and fragile. Furthermore, major websites such as Google, YouTube, and social media platforms now partake in “shadowbanning” conservative channels and pages. Shadowbanning is an act of partially blocking content so that people can’t stumble upon it by chance; they can only access it if they know where to look. This act further isolates young conservatives from their communities, urging them to believe that nobody thinks the way that they do; that nobody shares their moral compasses.

Social media is a beast of its own; people are able to hide behind the anonymity (or even, the virtual shield) of the platforms to emasculate men, strip white people of their self-respect, and send young conservatives into hiding. Hive-minded “social justice warriors” have plagued the Internet. They have effectively harassed and doxed anyone who openly opposes them out of their jobs and colleges. They have even resorted to publishing victims’ addresses and personal information online, subjecting them and their loved ones to harm. This is not a “woke trend” – this is psychological warfare. The left aims to police identities, principles, and thoughts. We are free, but at what cost?

“Cancel culture,” or the current, wide-spread form of ostracism in which people are banished from social, academic, or professional circles, has ruined countless lives. Cancel culture is a keystone example of the “Spiral of Silence” mass communication theory, proposed by German political scientist Elisabeth Noelle-Neumann in 1974. The Spiral of Silence refers to the tendency of humans to remain silent when they feel that their views are in opposition to the majority’s view on a matter. This silence is driven by a couple of factors: the fear of isolation when the group realizes that the individual has divergent opinion from the social norm, and the fear of ramifications or more extreme isolation (i.e. voicing contradictory opinions may lead to consequences such as loss of a job, status, etc.).

Older, pro-Christian and pro-conservative readers may have the luxury of discussing political and societal discourse openly with their colleagues and friends. Let me emphasize that this is a difficult and sometimes impossible feat for today’s youth. In my generation, there is no heated debate, followed with an “agree to disagree.” If you openly disagree with the liberal hivemind, you are placing a blinking target on your back.

In these perilous times, it’s easy to feel isolated. But do not give up, for you are not alone. Do not allow the liberal hivemind, and their anarchic tactics like shadowbanning and doxing, to convince you that your values are obsolete. The Christian American spirit is an incredible and fierce being, and together, we will overcome. The reality is that we have communities all over the Internet, filled with people who share our pro-Christ and pro-American beliefs. Granted, they are difficult to find; but once you do, you won’t feel so alone anymore. You’ll experience the resurgence of energy that comes with understanding the huge wave of conservatism that exists throughout the U.S. United, we’ll stand strong.

I’ll include a few pro-Christ, pro-American, and pro-family pages for you to check out.