Talking to Harris County Commissioner Jack Cagle is like talking to an old friend. He’s warm, forthcoming, humorous, and sincere. Those traits have helped propel him through a life of law and order, one that continues to focus on making Harris County a better place. He is running for re-election in the general election on November 6, 2018.

With 1.4 million people and an ever-expanding infrastructure, Harris County requires constant attention. Cagle is on call 24 hours a day, 7 days a week. Even his meals – frequently all three – include work, whether it be lunchtime meetings or dinner speeches. The issues on the table this cycle are varied, but all are important and most involve a great deal of money. Cagle understands these needs and is willing to take them on. His experience as a lawyer and a judge was the best preparation he can imagine for the job of County Commissioner.

“As a lawyer you have to learn to advocate for positions, to analyze, to study them,” Cagle said. “I loved being a lawyer, especially going to court. Then as judge, I got to be in court every day. I thrived on solving problems, trying to help the community, listening to opposing voices, and weighing with judgment. In that job, I dealt with broken things. I saw examples of how not to do it, how it could all go wrong.”

As County Commissioner, however, his perspective expanded. Instead of fixing what was broken, Cagle was given the opportunity to look toward the future, to ask, How do we build? As Cagle said, knowing what not to do was a huge blessing in this endeavor, and he couldn’t have done it without his previous experience as a lawyer and judge. He also couldn’t do it without his Christian values, ones for which he is unapologetic.

“When people ask me how I can bring my Christianity into my career, my answer is my Christianity calls me to truth, justice, righteousness, being a person of my word, humility, and transparency. Would someone really want me NOT to have these qualities?”

Cagle has had to demonstrate these attributes throughout his career, and his dedication to the best interests of Harris County is obvious. He discusses Hurricane Harvey with a passion to do better in preventing future flooding and preserving the Houston landscape.

“We have the ability to work together to devise a system for flood control. We did relatively well in Harvey, and it was the worst storm in North American history. We got 14 months of rain in 4 days. But our loss of human life was in the dozens instead of the thousands. Can we do better? Of course we can. We know that water flows downhill. That is its weakness and that’s where we need to attack the problem. If we can attack the water at the top of the hill, in the middle of the hill, and the bottom of the hill, we can spread out our impact and minimize its damage to us. I want to see an integrated system of approaching this problem, not just plugging up holes.” 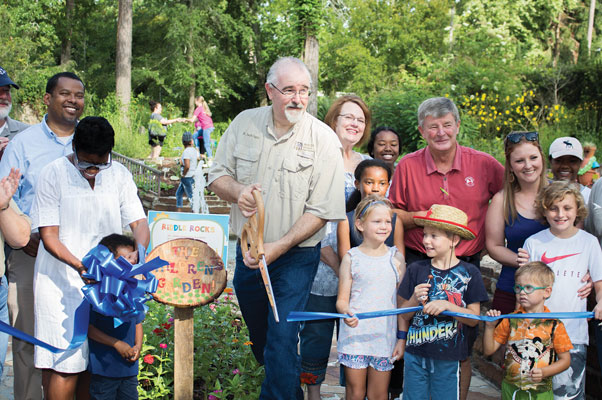 Another initiative that Cagle sees as imperative to Harris County is its park system. He and his team are taking an aggressive approach to developing greenspace along Houston waterways. The benefits are fourfold: First, this land cannot be built on and therefore is cheaper, saving taxpayer dollars. Second, it preserves wildlife along those areas. Third, it creates an ideal opportunity for bike, pedestrian and ADA-compliant trails. And fourth, a year removed from Harvey (and the lessons learned), it provides a flat, wide surface so that, in the event of future flooding, parks fill with water, rather than homes. Cagle explained, “Our population is doubling in the next 15 years, and greenspace gives water a place to go. If you have a wide greenspace with natural swells, water has a wide space in which to soak in. A house built up on a flood-plain is on an artificial island that quickly funnels water away, causing problems. If you’re looking for the proper way to handle drainage, God’s design is much better than man’s design.”

Cagle’s proactive approach to solving problems played a huge role in the construction of 6 major road projects since Christmas Eve, 2011. On that night, he was part of a team that drafted a deal with TXDOT to begin construction on much-needed roads that had originally been planned for 20 years out. The construction of 290 and 99, for example, would have been delayed until 2031 had it not been for the persistence of several Commissioners, working together, to push the initiative through. While Cagle credits many others with the heavy lifting on this deal, he is proud to have been a part of this crucial growth to the infrastructure.

Striking a crucial deal on Christmas Eve drives home the nature of Cagle’s character. He is a man for whom work never stops; a man who carries two cell phones and two iPads, even on vacation. Nevertheless, he has maintained a marriage of 37 years “to a lady who takes it all in stride,” and has three children who are now young adults, successful and pursuing their passions.

It’s not surprising, then, that when asked what he wants to be remembered for, what he wants his legacy to be, Cagle struggles to answer. Not because he doesn’t know what’s important, but because he doesn’t want to take singular credit for it. “I want to be a good and faithful servant who took this position and handed it off better to someone else. I want the legacy to be to public service, not to me. To how we as a county came together, served, and made decisions for the right reasons. If I do this job right, it’s not about me; it’s about public service. I’m a caretaker for a season.”