It all started when Reaghan Velasquez was only a 5th grader and she didn’t stop there. What started as a single action grew to a campaign to spread awareness about the failed spinal cord development condition called Spina Bifida. 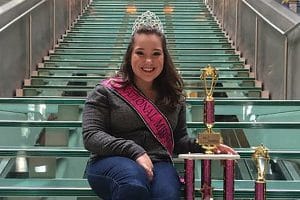 As a little girl with Spina Bifida, getting to the playground across a grassy, bumpy area was difficult to maneuver with a walker. Her and another classmate in a wheelchair were missing out on some of the fun at the playground with their friends.

After talking with her teacher, they came up with the idea to install some type of pathway to make it easier. Her teacher prompted Reaghan to write a letter to the principal so she did. It wasn’t but two days later an asphalt sidewalk was laid.

“This was kind of the start of the Yellow Out Campaign,” Reaghan said, “and the start of me wanting to understand more about my disability and what Spina Bifida was for me and for others.”

The cause of Spina Bifida is unclear but scientists believe that genetic and environmental factors act together to cause the condition. As she has gotten older, she has learned that there are various types of Spina Bifida that affect people differently.

Some of the different types are Occult Spinal Dysraphism (OSD), Spina Bifida Occulta, Meningocele, and Myelomeningocele (Meningomyelocele), also called Spina Bifida Cystica. The types vary so much that a person may never appear to have Spina Bifida because they only have occasional back pain.

“Hopefully, more people in our community will become more involved and more familiar with what Spina Bifida is and who can be effected by this condition,” Reaghan said, “but also know to empower the condition and inspire others to live life no matter what obstacle they may face.”

The next year, as a 6th grader, the Yellow Out Campaign started when Reaghan created the hashtag ‘I support Reaghan V’ and sold yellow braided wristbands for others to wear. She asked everyone to take photos with the wristbands and then share them on social media using the hashtag to spread awareness.

After talking with her counselor, they also established a day to have the whole school wear yellow to spread even more awareness. At least 60 people wore yellow to school and even more social media posts where shared.

“We became virtual friends,” Reaghan said. “She actually bought a shirt and continued to follow the campaign the following year. I even got to meet them at the Houston Livestock Show and Rodeo last year because of her too.” 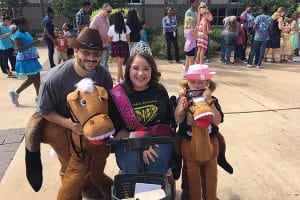 “We were able to make it to a game and it was really fun,” Reaghan said. “It meant a lot to see how much people cared.”

Celebrity chef Paula Dean purchased shirts as well to help spread awareness and support Reaghan. The Yellow Out Campaign has continued to grow over the years with the selling of more shirts and incorporating more disabilities and issues. This past year Reaghan focused on anti-bullying and food allergies, along with Spina Bifida since they all share the same awareness month.

“It’s important to raise awareness because there are so many people out there facing the same challenges as me,” Reaghan said. “We all need to be familiar with these disabilities and issue; so, we can understand more about what others go through. You then have a wide mindset and that’s why it is important.”

Reaghan hopes to not only inform others but also inspire others with her story. Even with the everyday challenges she faces, Reaghan doesn’t let any of them stop her and hopes others don’t let their challenges stop them either.

“It is going to be a challenge,” Reaghan said. “It is going to be an every day battle but you are going to have to ‘man up’ or ‘cowgirl up’ and just do you. Don’t let negativity, social media or anyone else try to stop you because of your disability.”

As Reaghan’s mom, Renae Velasquez shared she is extremely proud of all of her accomplishments and the initiative she takes. The ambition Reaghan has she said is all on her own. 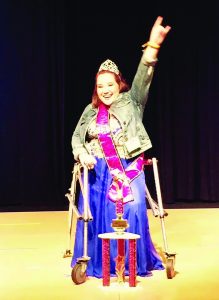 “A lot of people think children do these accomplishments because they are really pushed and driven by their parents, but in her case she pushes us,” Renae said. “She is the brains behind it all. We are there to help her and motivate her.”

“She is always thinking about how to make it bigger, how to expand it, and how to stretch the campaign’s reach to raise even more awareness,” Renae said. “Not just for Spina Bifida but other disabilities in general. Knowledge is power and that’s what it is about.”

Besides establishing an awareness campaign, Reaghan is still a regular teenage girl. She is an excellent student involved in the college readiness course, AVID and an equestrian rider. She enjoys participating in western riding events like barrels and trails with her horse Satchel.

Reaghan also participates in Texas Miss Amazing where she was named a Texas queen and represented Texas at the National Miss Amazing. She was even crowned a queen there as well. As a freshman in high school, Reaghan doesn’t have any set plans for her future but one thing is for sure – it will be bright.

Dear Doctor: What is ADHD?