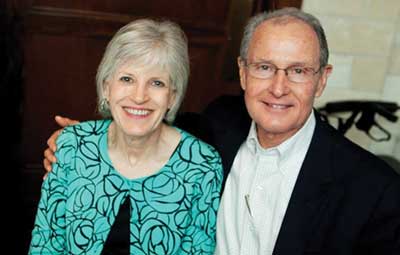 In 2001, Debbie Bertrand started having numbness in her hands and feet. She also experienced difficulty walking, saying, “It felt like my legs were iron.” Upon seeing a doctor, Debbie was diagnosed with Multiple Sclerosis (MS), which left her shocked and wondering what to do next. It was during church one Sunday that a fellow member approached her about his doctor, Dr. Stanley Jones, and told her about stem cell therapy and Houston-based Celltex Therapeutics Corporation. After doing some online research, Debbie felt stem cell therapy was a treatment option she should try and called Dr. Jones the following Monday to learn more about how the process works.

Celltex uses proprietary technology to isolate, multiply and store adult, autologous (one’s own) mesenchymal stem cells (MSCs) to be used for regenerative therapy in a number of conditions including vascular, autoimmune and degenerative diseases, such as MS, which is why Debbie was a great candidate for stem cell therapy.

“Adult MSCs have the remarkable potential of migrating to different parts of the body, recognizing sites of injury and inflammation, and are then able to transform into many different types of cells,” says Celltex Chairman and CEO David Eller.  The regenerative abilities of MSCs make them therapeutically beneficial in degenerative conditions like osteoarthritis, Alzheimer and Parkinson’s. MSCs, which are shown to be effective in a number of studies and clinic trials, can regulate the immune system by releasing anti-inflammatory agents in response to inflammatory conditions such as those that occur in autoimmune diseases like multiple sclerosis and arthritis.”

The process for obtaining MSCs is quite simple. They are extracted from an individual’s abdominal fat in a quick procedure that requires no recovery time. From that thumb-size sample, the individual’s MSCs are isolated, multiplied and stored for future use (this is known as cell banking). Celltex’s stem cell processing and banking methods ensure the genetic integrity and uniformity of an individual’s cells, which are then multiplied in quantities never before possible, which are then used for therapeutic applications. An individual can then use his or her banked stem cells for regenerative therapy through infusions or injections performed by a licensed physician. The fat extraction process only happens once because from then on Celltex will always have an individual’s stem cells on hand should he or she need them in three months or 30 years.

After having her MSCs extracted and banked by Celltex, Debbie scheduled her stem cell infusion in October 2011. Very shortly after she noticed her energy and strength increased drastically, but what she found most exciting was that she was no longer wheelchair-bound. “Now I can walk with a walker and even type with both hands on a keyboard. Stem cell therapy didn’t cure my MS, but it improved my quality of life.” At a recent doctor’s visit, her physician told her that the changes he saw were amazing. “He told her, ‘you have gotten so much better, and it’s not a result of me.’” The improvements he noticed were from Debbie’s stem cell therapy treatment, something she hopes everyone in the United States can have access to.

As it stands today, the U.S. Food and Drug Administration (FDA) has taken the position that an individual’s own stem cells are considered a drug if they have been expanded in large quantities; therefore, an individual may not receive his or her own MSCs in the United States until clinical trials have been conducted. These trials can take years to complete, but Celltex has already begun that process in cooperation with highly qualified researchers and medical and scientific institutions.

“Following the conclusion of successful clinical trials, we will seek approval from the FDA to provide stem cells for use by physicians in the United States. In the meantime, to meet the immediate needs of people like Debbie, we took steps to comply with the regulations established by the FDA and COFEPRIS, the equivalent of the FDA in Mexico, for exporting and importing MSCs,” says Eller. “Celltex works with established, certified hospitals in Mexico where highly-qualified, independently-licensed physicians make it possible for Celltex’s clients to receive their own cells for therapeutic purposes.”

It has taken dedication and resilience to be able to provide clients with this service. In partnership with Dr. Jones, Eller started Celltex in 2011—making it the first and only company of its kind in North America. Dr. Jones was determined to bring this technology to the United States after suffering a debilitating bout of autoimmune arthritis that rendered him unable to walk unassisted or perform surgery. He traveled to Asia in 2010 and 2011 to receive regenerative therapy using his own stem cells.

“Where conventional treatments failed to resolve my symptoms, stem cell therapy brought relief. Within four months of receiving my own stem cells I was operating again and had my life back,” says Jones. “For over 50 years, MSCs have been, and continue to be, used in many countries with great success, so David and I founded Celltex to bring the healing potential of stem cell therapy to the United States.”

Currently, everything from the stem cell isolation process to expansion and banking is handled in Houston at Celltex’s FDA-compliant lab. When it is time for therapy, clients work with the Celltex client service coordinators to plan their therapy and travel options in Mexico. After therapy, the individual returns home to let their body begin the process of healing itself. It is important to note that because stem cells come from a person’s own body, they are classified as biologics not as drugs, which means that a patient’s response to stem cell therapy is completely dependent on how that person’s body reacts to his or her stem cells.

“Two people receiving stem cell therapy for MS might not respond to therapy in the same way,” says Jones. “The quantity of stem cells given will vary, and Celltex works with each client’s physician to determine the best plan for therapy.”

For more information about Celltex and the process of stem cell banking or to review some frequently asked questions about stem cell therapy, please visit www.CelltexBank.com. If you would like to speak to a Celltex client services representative about banking your stem cells, please call (866) 284-6548.

Honor at Home: How To Deliver A Formal Complaint To Your Spouse