If you love historic sites in towns across our state, then you share an interest with Anita Perry. As the longest serving First Lady of Texas and inductee of the Texas Women’s Hall of Fame, she works with the Texas Historical Society to visit newly announced Main Street communities. To date, Perry has visited a total of 49 cities and welcomed them to the program in this annual tradition. 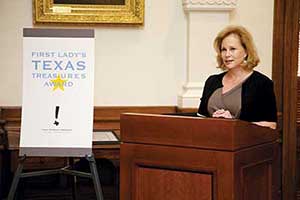 The national Main Street revitalization effort for historic downtowns was formed more than 30 years ago as a subsidiary of the National Trust for Historic Preservation. The statewide Texas Main Street Program operates as part of the Community Heritage Development Division of the Texas Historical Commission. In 1981, following a pilot project to address the decline of America’s downtowns, the Texas Main Street Program became one of the oldest and largest statewide coordinating programs in the nation to help preserve and revitalize historic downtown districts.

Each year the Texas Historical Society selects up to five Texas cities for official Main Street designation. Communities of all sizes with historic downtowns or historic neighborhood commercial districts are eligible to participate. Those that qualify receive design and technical consultation from state historic preservation professionals, architects and consultants, as well as marketing, promotion and on-site manager training.

Our Neighbor to the West 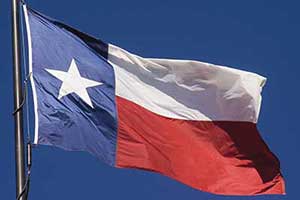 Sealy, just west of Brookshire on I-10, was thrilled to become one of the newest Texas cities to be accepted into the Main Street program. This past spring, some local Katy business owners were on hand to celebrate, including Cheri Bumbera of Bumbera’s Performance Associates. She witnessed the First Ladyspeak at the Sealy Main Street Dedication Ceremony.

Sealy student choirs captured the First Lady’s heart with their rendition of the Navy hymn, “Eternal Father, Strong to Save.” Perry noted that it’s important to have a program dedicated to main streets that enables people to gather and salute their heroes. She announced to a crowd of approximately 100, “I want to thank you for preserving the City of Sealy for your children,” and noted the importance of historical buildings in the stimulation of economic growth.

After departing Sealy, Perry traveled to Caldwell and Waco to thank them for their longstanding work to save and enhance their Texas heritage and culture. This concluded her last tour to newly accepted towns during her husband, Governor Rick Perry’s, reign as Governor.

Since 2009, our First Lady has acted as honorary chair in partnership with the Texas Historical Commission to honor communities demonstrating a high level of creativity and ingenuity in recognizing and preserving their authentic Texas “sense of place.”

These communities demonstrate stewardship and a preservation ethic as an example for others across Texas. The City of Denton won the award in 2014, Paris in 2013, San Angelo in 2012, Brownsville in 2011, Nacogdoches, San Marcos, and Waxahachie in 2010, and Castroville, Georgetown, and Mount Vernon in 2009.

We thank the Governor and First Lady for their tireless service to the people and places of Texas. Visit www.thc.state.tx.us to learn more about the Texas Historical Society.

Back-to-School... With the Help of KEYS