School’s out! We’ve shown our gratitude to our teachers and the Katy ISD administration for a successful year. But one other crucial component within the district is the Katy ISD Police Department – and we certainly want to thank them, as well! 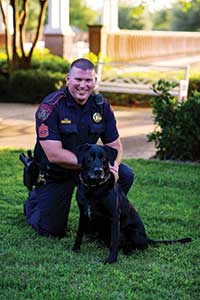 Comprised of a 50-person staff, Katy ISD police officers serve our 67,000 local students and their families. Officers provide safety and security within Katy ISD regarding inclement weather to threats on campuses… to contraband.

In fact, one “officer” on the Katy ISD police force is solely concerned with contraband. His name is “Officer Marcel,” an eight-year-old black Labrador whose single purpose is passive alert narcotics detection. He is canine certified to detect the odors of cocaine, marijuana, methamphetamines, and heroin. While he does not track people, he can locate narcotics in open fields or large areas when needed.  And he’s just so darn cute that we had to showcase him on our front cover.

Marcel was originally purchased from Global Training Academy in France and shipped to the United States (which is how he got his French name). For five years he has served side-by-side with his very special handler, Sergeant Justin Moyer. The month of August will mark their 6th anniversary of K9 police work in the district – and Marcel’s 9th birthday.

Sgt. Moyer was fortunate in that he was allowed to visit Global Training Academy and personally choose from four different dogs. As he watched Marcel work, he knew there was a connection. “After I played and spent some time with him, I knew he was the right dog for me,” says Sgt. Moyer, who returned to the Global Training Academy for a three week narcotics detection handler class. He learned about canine psychology and how and why dogs “work,” as well as how odor travels and are detected by the dogs. “I had to take a written exam and pass a certification exam with Marcel before we could officially become a team,” he notes.

A Special Breed of People

Sgt. Moyer wanted to be a police officer from the time he was five years old, and throughout school never changed his mind. He enjoys the fact that he is able to help and protect others in their times of need. Originally from Katy, he liked the idea of working with students. This is one of the few places where an officer can really see the positive effects he has on students, which is highly rewarding. In October of 2013 he was promoted to the rank of Sergeant with the Katy ISD Police Department, where he has served for seven years. In all, he has been a patrol officer for 12 years.

Canine handlers are a special breed of people, and not just any officer is right for the job. Each department has different methods of vetting appropriate candidates. When Katy ISD had a handler vacancy, the command staff sent out an email asking for letters of interest. Sgt. Moyer expressed his interest, and the canine commander explained the expectations and dedication required.

Ultimately, Sgt. Moyer was selected. “To be a canine handler, I feel that you must have a love of dogs, a commitment to something bigger than yourself, and a good work ethic.” He noted that much of being a handler involves self-motivation. “While some of our work is requested by other officers or schools, much of our work is self-initiated,” he adds.

The Duties a Police K9 Team

Marcel is tasked with sniffing for narcotics in classrooms, locker rooms, in the lockers in the hallways, vehicles (both in parking lots and on traffic stops), as well as special occasions in which he checks student and faculty luggage prior to trips from school.  He and Sgt. Moyer train together quite a bit to keep Marcel’s skills sharp. Marcel also gets re-certified each year by Global Training Academy on all four of the odors, which allows him to continue work the next year.

Most people are unaware of Marcel’s “job,” which is normally not publicized. “Since Marcel and I have been partners, we have performed over 950 searches throughout the district and with other agencies, and have helped file well over a hundred criminal charges,” says Sgt. Moyer. 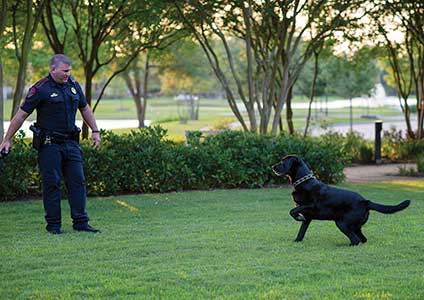 When asked what kind of temperament is needed in a good police dog, Sgt. Moyer notes that different dogs have different temperaments for the type of work they are asked to do. “Most have a playful or relaxed personality, which makes their training easier to maintain,” says Sgt. Moyer. “Marcel has a playful and high drive personality, which makes him very good at detection work. Narcotics canines usually like to play and have more of an independent personality.”

In the mornings as Sgt. Moyer gets into uniform, Marcel becomes aware that it’s time to “go to work.” But sniffing for odor is really a game of hide and seek. He doesn’t know that what he is looking for is bad, dangerous or even illegal. “All Marcel knows is that he is trained to locate a source of odor, and when he finds the source he gets to play with his toy,” says Sgt. Moyer. Marcel’s “Kong” – a toy that he gets only when he is working – has a high reward value for him.

Life Behind the Scenes 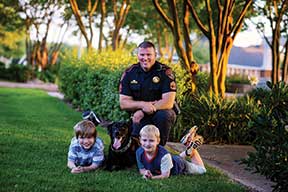 Marcel is more than “just a dog” to Sgt. Moyer. They live together 24/7/365 and are basically “family.” An extremely tight bond runs deep due to the nature of their duties. Certainly, their work can be dangerous and they rely on each other daily. Speaking of danger, if a police dog is wounded in the line of duty, the offender isn’t charged specifically with “assault against a police officer.” But there are several other offenses that someone could be charged with if they interfere, injure, or assault a police canine.

Being a police officer is tough work. “I hold my job not only as a police officer, but as a canine handler, in high regard,” says Sgt. Moyer. “That has taken priority, and that is where the dedication and devotion to the job and my dog come into play.” Although he is not married, Sgt. Moyer has family, holidays, birthdays and other special events that he’d like to attend. Fortunately, his family has been very understanding of the hours and shifts that he has worked throughout his career.

The bottom line is that he feels fortunate and honored to have the opportunity to be a canine handler with Marcel as his partner and family member. Police canines do things that no human officer can do, whether through narcotics detection, explosives detection or fugitive apprehension. “Marcel is a huge asset to this department as well as the district, and there is no way to measure the amount of deterrent he brings to the job just by being present,” says Sgt. Moyer. In short, Marcel makes the schools and district a safer place for students, faculty and visitors.

When the Time Comes

Police canines normally retire after they turn 9 or 10 years old, depending on their health and work drive. Some work longer, and some less, due to those factors. When the time comes, they are normally retired out to their handlers and become pets who live out the rest of their lives as “typical” dogs. Marcel is going strong and has a vibrant future in the force, but will inevitably one day live a life of leisure at home.

We asked if a memorial place exists to honor police dogs who have passed away – a place that people can visit. “Each department is different as to how they handle the memorial place of their respective canines,” says Sgt. Moyer. “Our department has a plaque and a flag on display in our training room for one of our canines who passed away. There is also a site dedicated to the fallen police canines on the “Officer Down Memorial Page.”

Some departments have a full dress funeral for the fallen canine just as if they were human officers. “I believe it would be up to the handler and the command staff to decide what type of memorial service is done for a fallen canine,” notes Sgt. Moyer.

The Katy ISD Police Department Facebook page is full of photos of officers in action and can be found at www.facebook.com/KISDPD. You’ll find more photos of Marcel on their posts. Keep Marcel, Sgt. Moyer and all of the men and women in uniform in your prayers so that they may stay safe. Their service is a blessing to us all.