Author Richard Capriola, a Katyite, has a new book out on the market. “A Nation Under Judgment” reviews social policies from a scriptural point of view and asks readers to explore whether our nation is moving away from being “one nation under God.”

Are the words merely a political slogan with meaning only in times of national crises… or are they a guidepost for how our nation shapes its policies and programs? Capriola hopes that reading the book will give audiences a deeper understanding of what it truly means to be “one nation under God.” It provides a road map back to our Biblical roots by helping readers gain an understanding of how our nation was founded on Christian principles. 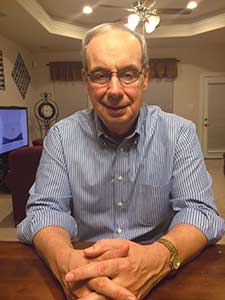 Capriola completed four years of Clinical Pastoral education and has served as a hospital chaplain and mental health counselor. His writing journey began over seven years ago, starting with the simple idea of writing a book about wisdom from a Biblical point of view. Capriola began to explore different definitions. What is wisdom? How is it defined, and by whom? What does it mean?

He found several secular definitions, but not a Biblical definition. “Finally, I remembered a sermon that defined wisdom as “the ability to see things from God’s point of view.” He suddenly had his answer – wisdom is not so much how we see things in this world, but rather how God sees things.

Then Capriola began to explore how God might view our nation and its policies. How are we doing as we construct our social policies? Do we do so from wisdom, or from a political agenda? “I also wondered what had happened to the great and powerful nations of the past – nations that lost their wisdom,” adds Capriola.

The first chapter gives an overview of our historical roots as a nation, and reviews nations that strayed from God’s point of view. What happened to all the great empires of the past? Many of them have histories much longer than ours, yet today they are found only on the pages of history books. Could it be that they strayed away and faced judgment?

Capriola identified social policies regarding poverty, homelessness, the environment, marriage, gambling, pornography, greed and gluttony, as well as others, and then contrasted that with God’s scriptural point of view. Each chapter is devoted to a specific social policy, and there is also a chapter on “The Power to Persuade,” which reviews how policies are constructed with an emphasis on money rather than scripture. 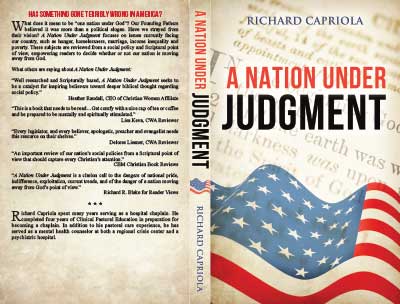 “Our Founding Fathers knew that we could not indefinitely exist apart from God’s point of view,” says Capriola. “George Mason warned that providence would punish national sins with national calamities. Thomas Jefferson said, ‘I tremble for my country when I reflect that God is just and that his justice cannot sleep forever.’ These great men understood that our nation’s future rests on its commitment to live by the words ‘one nation under God,’ and that we must create national polices that reflect His point of view rather than policies that conform to a political agenda.”

Why Read the Book?

Another review notes that the book is an important review of our nation’s social policies from a Scriptural point of view that should capture every Christian’s attention.” A third reviewer said, “Every legislator, and every believer, apologetic, preacher and evangelist needs this resource on their shelves.”

A Note from the Author

“I have felt a burden to write a Nation Under Judgment for a long time,” says Capriola. “I think this book gives evidence in a concrete way that many of our concerns have merit. This is perhaps the only resource that compares our nation’s social polices from a scriptural point of view, and I believe many Christians who fear our nation is moving away from God will find evidence to support their belief by reading ‘A Nation Under Judgment.’”

Visit www.anationunderjudgment.com to learn more, and purchase a copy at Amazon and Barnes & Noble.