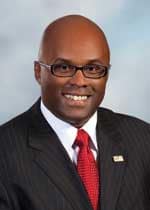 Although we generally envision pastors laboring behind the pulpit, some clergy work in the secular world. Meet one man of the cloth who serves in a business suit.

Henry Dibrell is an ordained minister who can perform marriages, baptisms and administer sacraments. But at this point in his career he is best known as a Katy ISD school board member and executive director of the Amobi Okoye Foundation.

As a youth, all Dibrell wanted to do was serve God. He felt he could do this best by leading and achieving. His mother had a third grade education and his stepfather made it to the eighth grade. “It is because my parents lacked academically that they pushed, prodded and encouraged me to get my college degree and become what I am today,” he says.

Dibrell earned a B. S. in marketing and then answered the call to ministry. He became licensed at Turning Point Ministries International in 1993. Soon afterward he became a Certified Behavioral Counselor at The Institute for Motivational Living. He accepted a position as Executive Pastor of Heights Assembly of God and was responsible for event planning, grant preparation, financial management, marketing, as well as ecclesiastical duties. His service there led to a position as the Executive Director of the Kingdom Builders Prayer Institute overseeing marketing, public/community relations, database management, and program design.

He knew that one day he would one day put his Christian values to good use in politics. As an African American who is a fiscally and socially conservative, he hopes his example will inspire others to uphold traditional American values. He and his wife Delia encourage scholastic excellence in their four children, and Dibrell’s nonprofit work impacts children in our community and around the world.