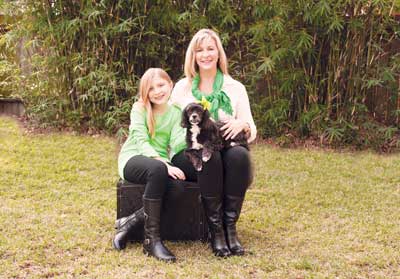 They say we’re all Irish on St. Patrick’s Day, but for some it’s a year-round honor. Meet a family that recently discovered the depth of their Irish roots — with a surprising link to the American Revolution!

Holly McCarthy Chervnsik knew she was Irish, but never dreamed the McCarthy clan could be traced back to nobility. She assumed her ancestors would be linked to the mass starvation, disease and emigration of the Great Potato Famine between 1845 and 1852. Her father, Austin Terry McCarthy, often said, “Don’t dig too far into the family tree… you’ll probably find a bunch of horse thieves!” But this couldn’t have been further from the truth, as she was about to discover.

From the Kings of Munster

Holly decided to investigate her lineage after watching the popular television show Who Do You Think You Are, and began unraveling a remarkable story of culture, heritage and faith. “My husband Robert comes from Eastern European stock (Czech), and I come from Western European stock (mostly Celtic), and I wanted to sort it all out for our 9-year-old daughter Nadia,” she says.

She began a patriarchal search and entered her father’s name into the ancestry.com database. Like a sleuth, she began connecting the “leaves” and followed along as centuries of history unfolded. Soon it was apparent that the Emerald Isle was tied to the shores of America in amazing ways, especially as the 13 colonies geared up for a Revolution against the King of England.

It all started with Major Dennis Riley McCarty, who was born in Cork County Ireland in 1649. He was a descendent of the Kings of Munster who had ruled southern Ireland since the dawn of time. As an immigrant to the American colonies, he fought in the Susquehanna War of 1676 and married Elizabeth Hawkins Billington (who was also Irish). Upon his death in 1694 in Richmond County, Virginia, he left behind two minor children, daughter Catherine and son Daniel, who was born in 1679.

A Family of Early Episcopalians

Daniel became a military Captain, Speaker of the House of Burgesses, an esquire, and a volunteer in the Episcopalian Church. He married Elizabeth Pope and acquired land, a large library and multiple houses. His gravestone reads, “Here lyeth the body of Daniel McCarty, who departed this life the forth of May, 1724, in the forty-fifth year of his age. He was endowed with many virtues and good qualifications, but the actions proceeding from them bespeak their praise.”

Daniel’s son Dennis (who was named after his grandfather) was born in Richmond, Virginia.  Dennis was a leader in the patriotic cause in Virginia. As a colonel, he commanded a regimen in the Revolutionary War of 1776 and married Sarah Ball, a first cousin to George Washington (who would later become the nation’s first president).

“My daughter was really excited to find this link, especially since our discovery nearly coincides with President’s Day on February 17,” says Holly.

Daughters of the American Revolution

With documentation including immigration and military records, Holly was able to register both herself and Nadia as Daughters of the American Revolution. Now thoroughly addicted to ancestry.com, she discovered that an extra “h” was added to the spelling of “McCarty” between the years 1740 and 1785, further Americanizing the name. But she also began researching maternal bloodlines and various branches of her family tree.

Incredibly, Holly was able to document a total of 15 ancestral grandfathers with different European roots, who all served in the American Revolution. She submitted these entries to the Daughters of the American Revolution for the sake of her daughter and future grandchildren. “It’s so gratifying to know my family served our country, and that they fought on the side of liberty,” she notes. “It’s an example of “God and Country” that I’ve shared with Nadia, who will someday use our research for a school project.”

As Holly uncovered each new ancestor and their role in American history, she shared the information with her parents, Terry and Ellen McCarthy. “My Mom and Dad are on cloud nine,” notes Holly. “It’s very special that they are learning about our ancestors at this stage, because they’ve literally waited a lifetime to understand who we are as an extended clan.” Plus, her father has a tattoo of a shamrock with the name McCarthy printed on a scroll across it, and now has some bragging rights to go along with it!

Of course, it will take another year or so to fully unravel her mother’s side of the family, but Holly is now researching a slew of 17th great-grandfathers and working her way from AD back to BC. Who knows, she may someday discover additional ancestors who also served during the American Revolution. In the meantime, she’s grateful to see the rich culture of her Irish people and the strong roots that have shaped her DNA — and the nation.

Letter from the Editor