Maybe you’ve heard the shocking breaking reports of “After School Satan Clubs” opening up and interacting with young children across the nation, with parent and faculty support.

Or perhaps you’ve come across reports of a staggering drop in the number of Americans who self-identify as Christians, accompanied by predictions of the religion’s fade into the cultural background within a couple of decades.

These trends may dishearten our largely Christian and right-leaning readership. However, if we’re going to win back our nation, it’s essential that believers are educated on recent research, data projections and happenings.

The Pew Research Center estimates that “in 2020, about 64% of Americans, including children, were Christian. People who are religiously unaffiliated… accounted for 30% of the U.S. population. Adherents of all other religions – including Jews, Muslims, Hindus and Buddhists – totaled about 6%.”

“Since the 1990s, large numbers of Americans have left Christianity to join the growing ranks of U.S. adults who describe their religious identity as atheist, agnostic or ‘nothing in particular.’ This accelerating trend is reshaping the U.S. religious landscape, leading many people to wonder what the future of religion in America might look like,” The Pew Research Center wrote. 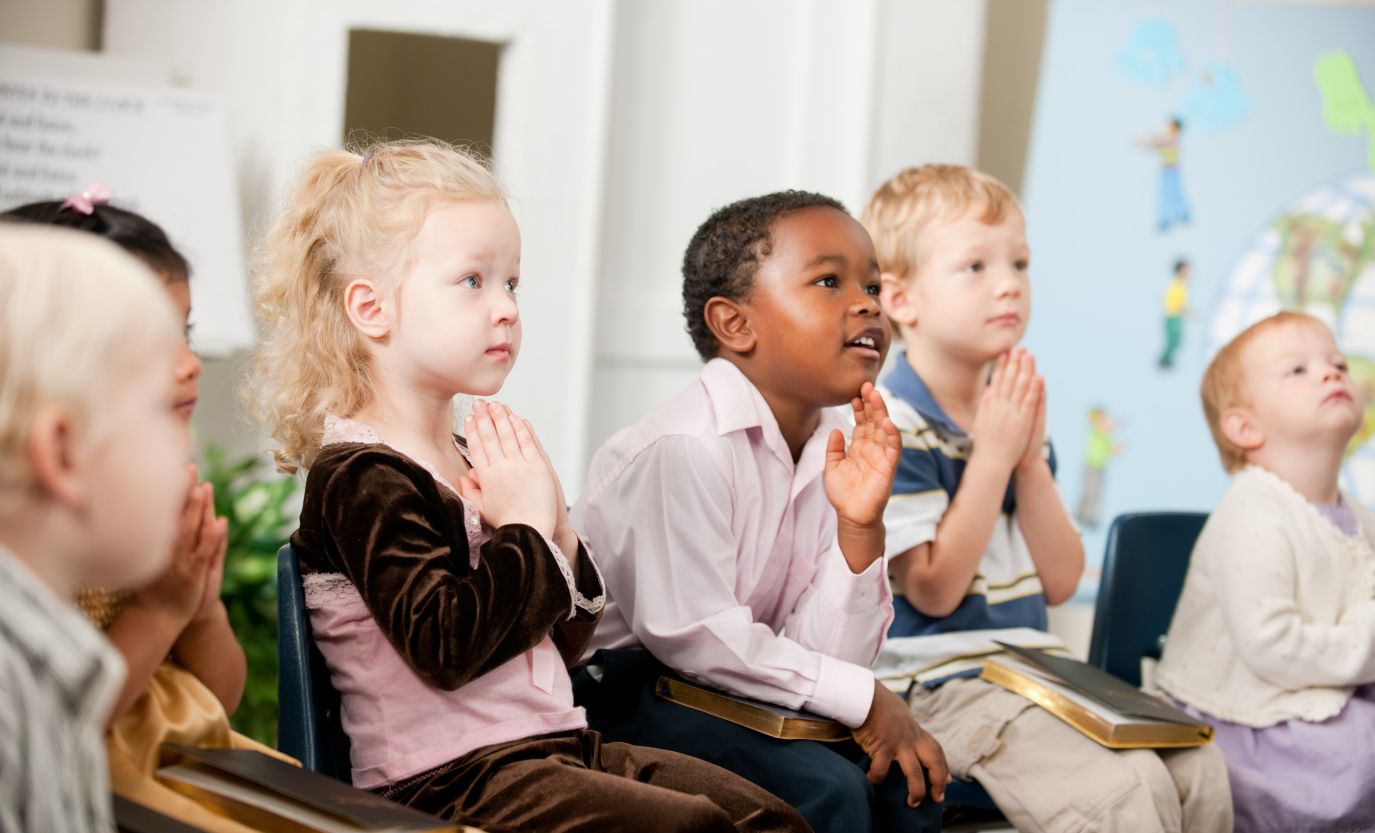 The decline in Christianity is a pressing phenomenon on a global scope.

According to their report, in England and Wales, Christianity has plummeted so low that now, for the first time in the census’ history, less than half of the population identify as Christians.

This census sparked controversy among the U.K., urging a public comment from the Archbishop of York, Stephen Cottrell.

Christianity is not in a “terminal decline,” and the religion will naturally rebound, the archbishop said. He compared the “setbacks” Christianity is facing to the obstacles Jesus faced, stating that Christianity, too, will overcome all.

Perhaps more alarmingly, ONS reported a 167 percent increase in the number of people in England and Wales who identified themselves as “Satanists” between 2011 and 2021. It’s worth noting that these numbers are still relatively small (from 1.9 thousand to five thousand people).

“Satanism” appears to have taken off as a worldwide counterculture trend. The Global Order of Satan operates in the U.K., France, Germany, Austria, Poland and Sweden, while The Satanic Temple has congregations throughout the U.S., including multiple branches here in Texas.

The Satanic Temple (TST) has generated massive traction throughout America, accumulating both fame, among some, and notoriety, among most, along the way.

TST claims that its members do not worship Satan, nor do they believe in Satan’s existence, or in God, or in the spiritual realm in any real capacity. Rather, it asserts that Satan’s name is used as a symbol for “free thinking” and protesting mainstream culture.

“The Satanic Temple believes that religion can, and should, be divorced from superstition. As such, we do not promote a belief in a personal Satan. To embrace the name Satan is to embrace rational inquiry removed from supernaturalism and archaic tradition-based superstitions,” TST stated on its website.

“Satanists should actively work to hone critical thinking and exercise reasonable agnosticism in all things. Our beliefs must be malleable to the best current scientific understandings of the material world — never the reverse.”

TST goes on to assert that it “doesn’t condone evil.”

“The Satanic Temple holds to the basic premise that undue suffering is bad, and that which reduces suffering is good. We do not believe in symbolic ‘evil.’ We acknowledge blasphemy is a legitimate expression of personal independence from counter-productive traditional norms.”

Yet while TST claims to harbor no sinister messages, the “temple” has stirred the pot with its vocal engagement in many social issues, and its nation-wide chain of “After School Satan Clubs,” which are hosted in schools, targeting children as young as 7 years old.

According to a recent article by The Washington Stand, After School Satan Club (ASSC) volunteer Rose Bastet claims that the “club’s purpose is not for children to worship Satan.”

“[It] is meant to offer opportunities for students to ‘learn about science, arts, crafts and compassion,’” Bastet said. “We have no interest in theological discussions with children; that is best left to their parents.”

ASSC serves as an alternative to an after-school traditionally religious or Bible study club offered by an evangelical church, Bastet asserted.

Many parents, school board officials and citizens have expressed intense concern and skepticism about the club’s “purported benevolent purpose.”

“This Satanist church is seeking to access school rental space as an organization and then frame it as offering an ‘after school activity,’” Meg Kilgannon, senior fellow for Education Studies at Family Research Council, told The Washington Stand.

“They are trying to provoke. Schools, especially in rural areas, rent rooms as meeting space on weekends. A big part of that income is from churches. So, the Satan club wants to be rejected so they can say, ‘If you reject our ‘church,’ you can’t rent space to any church.’”

“It’s no surprise that evil is coming from a group devoted to Satan, or that their attack is directed at children and the church.”

However, believers and other opponents of TST and ASSC must keep in mind that the opening of these “clubs” is largely out of the hands of school boards. Because Christian churches can host after-school clubs on school property, equal access laws will likely require schools to allot their public spaces to ASSC.

ASSC’s claims of innocently hosting children aside, what is actually happening within these after school programs?

The following images are shocking screenshots from a video, titled “Educatin’ with Satan,” from ASSC’s website. 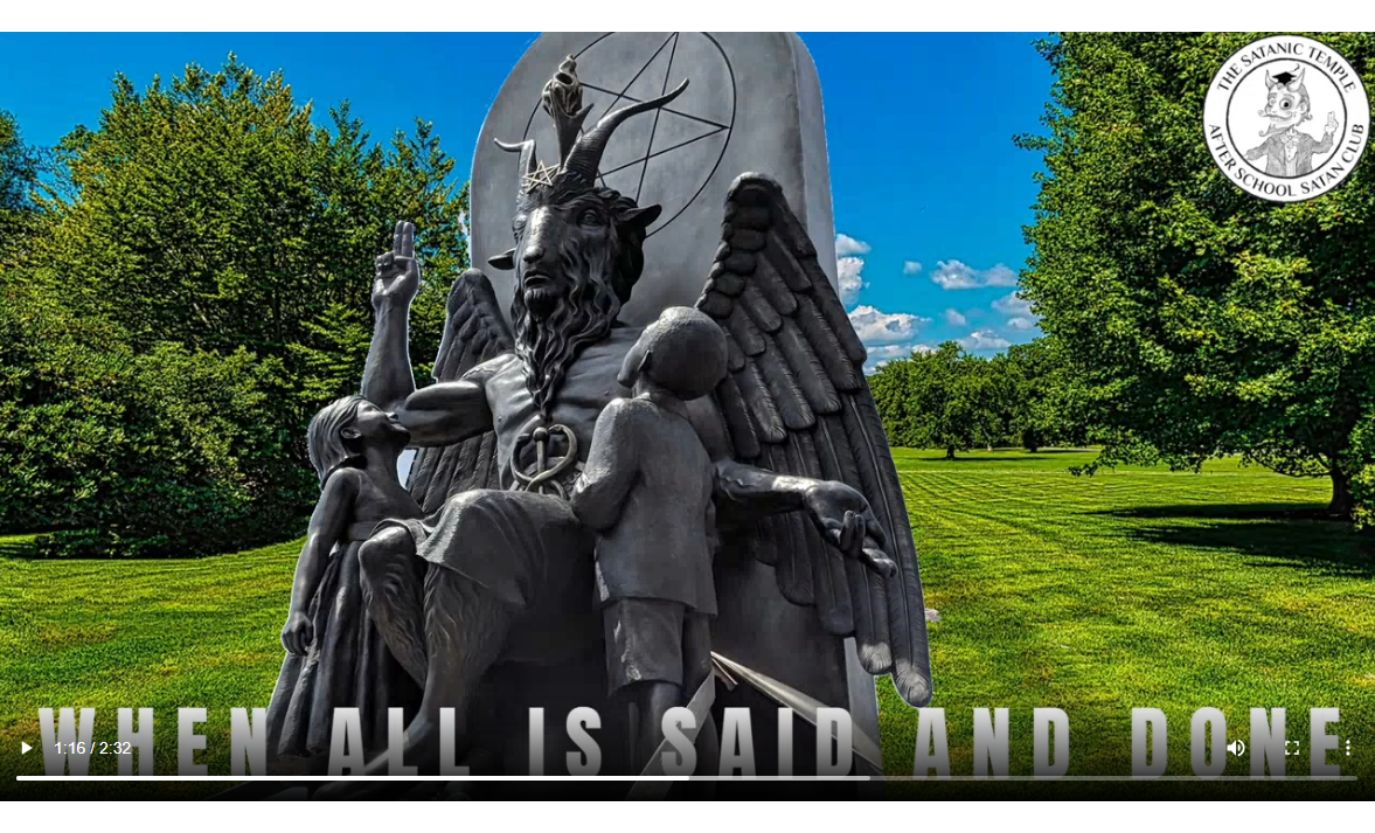 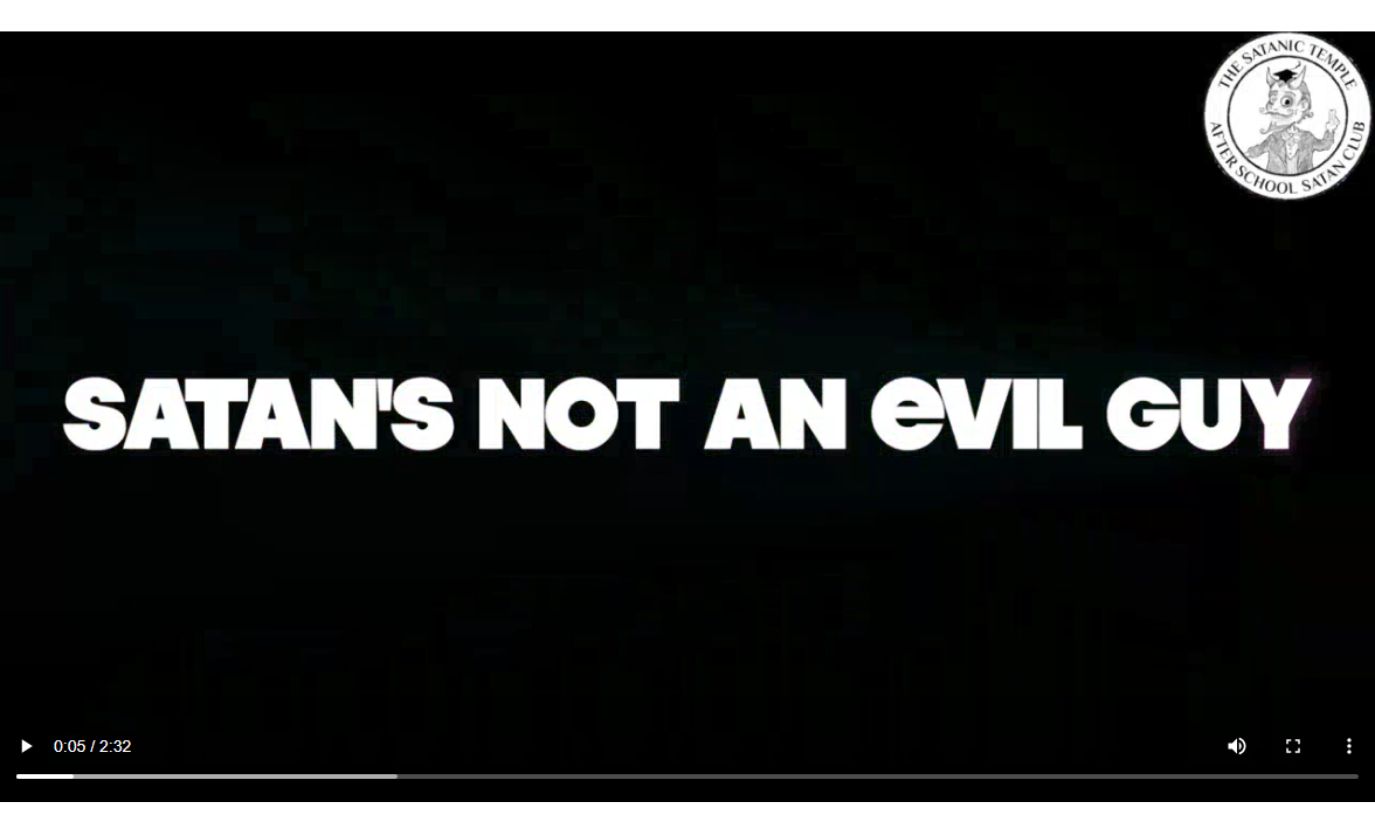 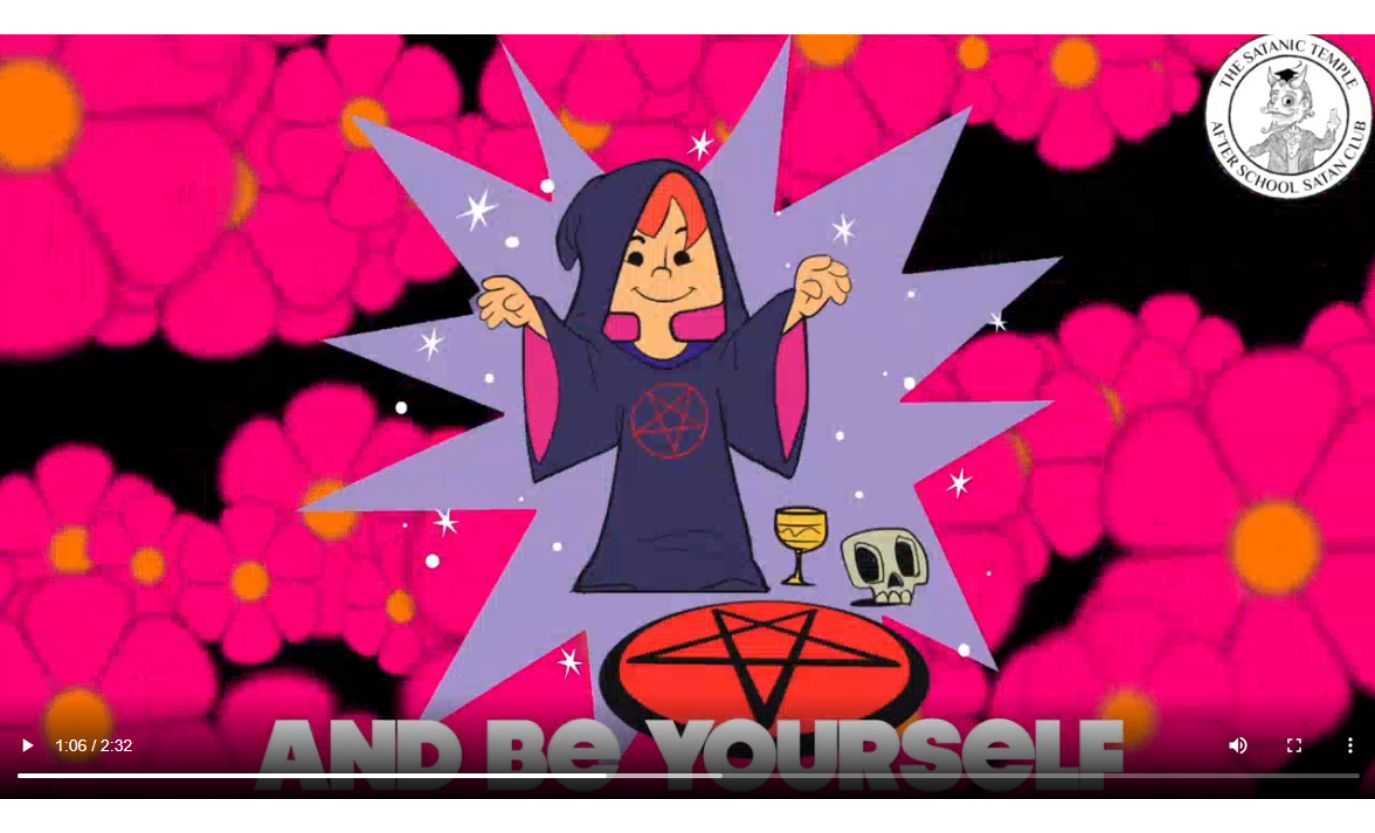 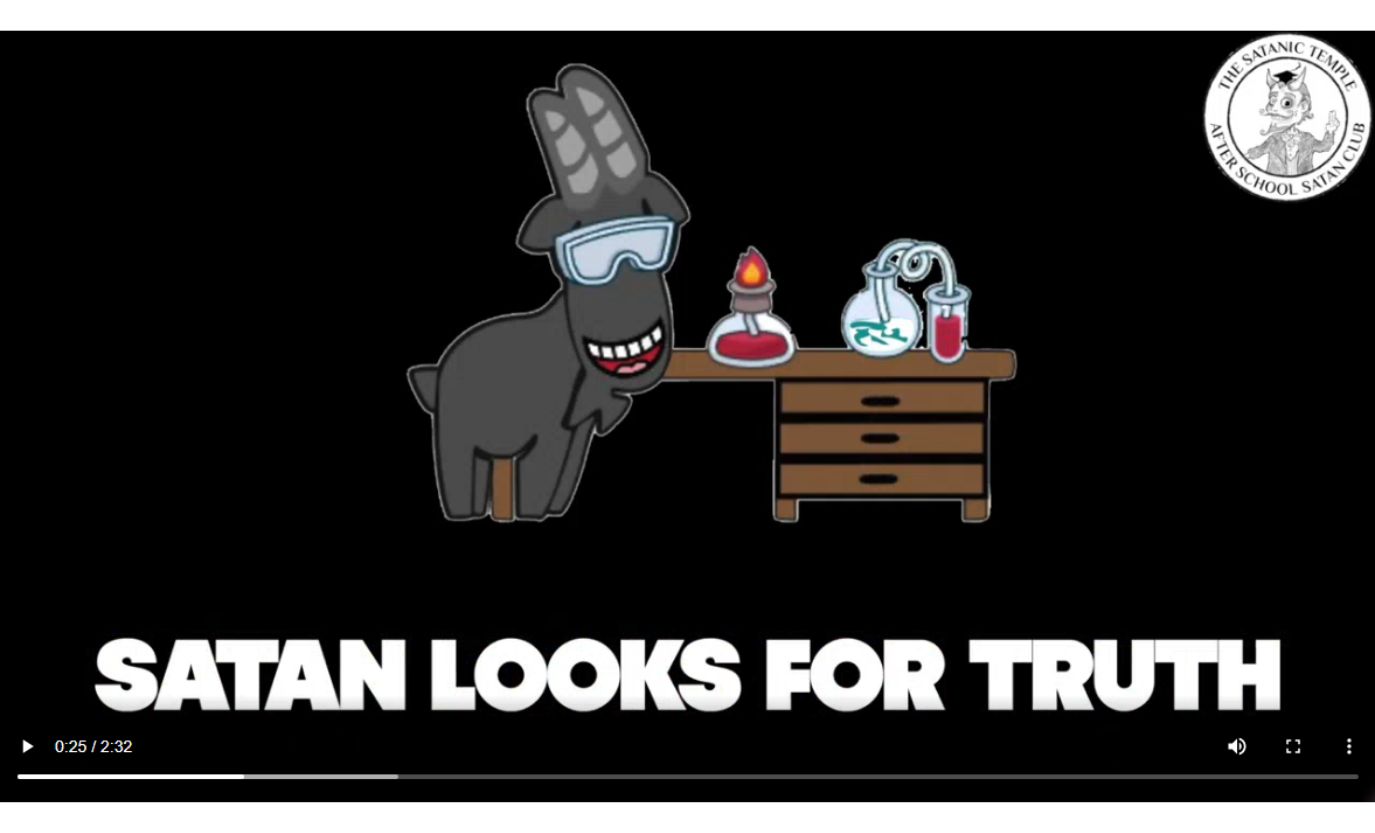 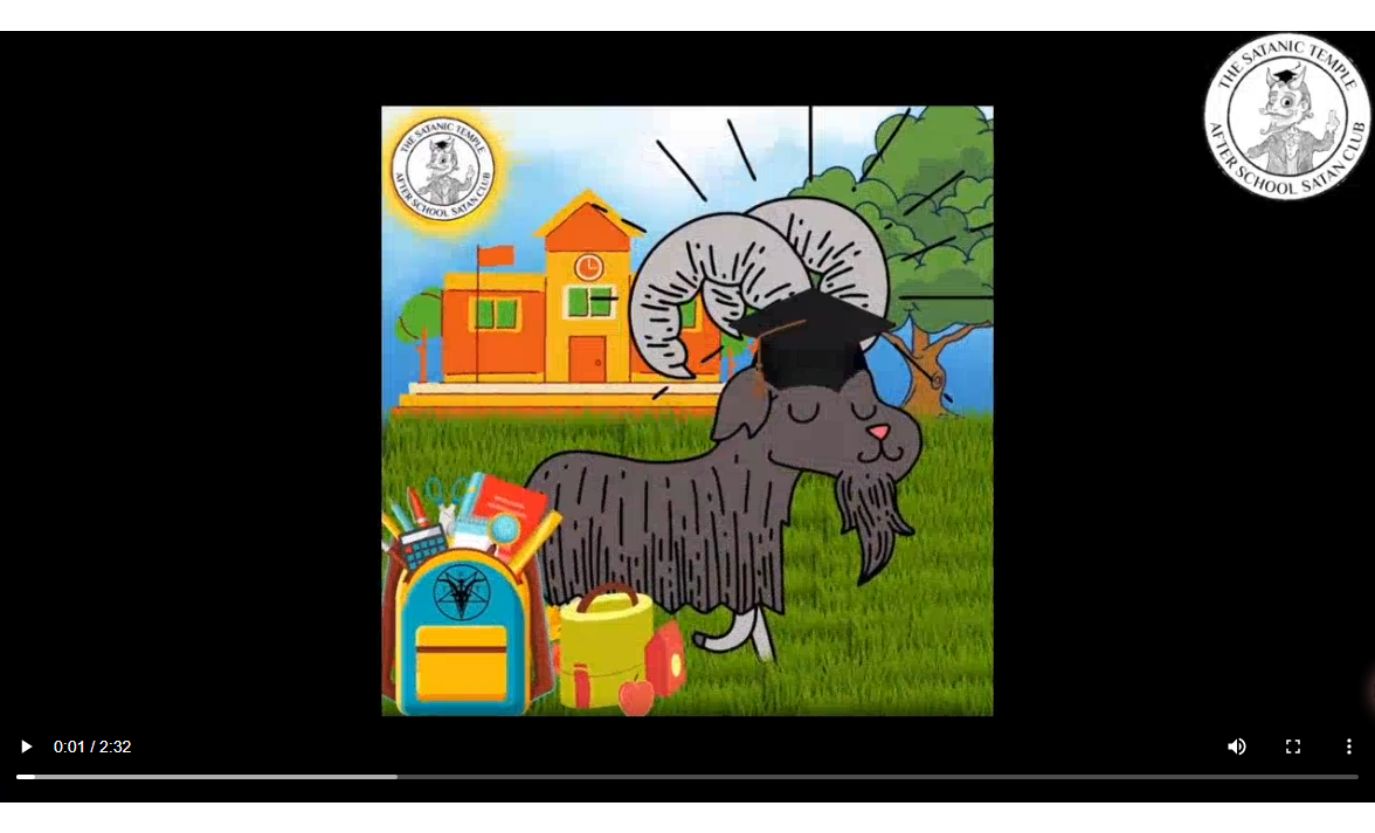 The video is colorful and musical, sung in a children’s jingle. The full lyrics are below:

“Satan’s not an evil guy.

He wants you to learn and question why.

He wants you to have fun and be yourself.

Science is important, so we understand the world.

Satan looks for truth, let’s help him boys and girls.

Satan’s not an evil guy.

He wants you to learn and question why.

He wants you to have fun and be yourself.

Everyone is different, and that’s okay with Satan.

Satan’s not a scary guy,

He wants you to share and to be kind.

He wants you to have fun and be yourself,

When all is said and done, Satan doesn’t actually exist.

He’s an imaginary friend who can teach us how to live.

Satan’s not a scary guy,

He wants you to share and to be kind.

He wants you to have fun and be yourself,

Satan’s not an evil guy,

He wants you to learn, and question why.

He wants you to have fun, and be yourself,

And by the way, there is no hell.”

This is the message being pushed upon small children.

It’s extremely dangerous and careless to simplify TST and ASSC’s engagements with children and community as “attention-seeking” and “edgy” behavior. Satanism is not merely the cult of contrarians, and their romanticism of Satan is not metaphorical.

We are in the midst of the Biblically prophesied Spiritual War. These clubs are infiltrating schools and targeting children. This virus is spreading exponentially and nationwide. They win over agnostic, atheist and nonreligious parents and convince these parents to bring their children directly to them, under the guise of “Satan’s nonexistence in the first place.”

Within these clubs, children are subliminally indoctrinated and desensitized to the very real Spiritual World. They’re taught to reject God and revere Satan as a symbol, a martyr and their “imaginary friend.”

Satan is referred to, throughout the Bible, as “the liar,” “the deceiver,” and “the father of all lies.”

And it’s a brilliant war strategy. The Deceiver and his followers are recruiting and converting young, pure, and malleable minds by simply pretending he doesn’t exist in the first place.

The greatest trick the devil ever pulled was convincing the world he didn’t exist.

How to Be your Kids’ Best Role Model