The Austin-American Statesman, a major daily media outlet in Austin, this week released a 77-minute video of the Uvalde mass shooting.

The video shows in excruciating detail the gunman casually entering the school building. As he rounds a corner to a classroom, he swings his AR-15-style rifle and flips his hair out of his eyes. One child emerges from a bathroom down the hall, sees the gunman as he is about to enter a classroom, freezes, then turns and runs back to the bathroom.

The video is unedited, with the exception of silencing the children’s screams as the gunman opens fire. Later, police officers arrive. In full tactical gear, they wait in the hallway to be given orders by their police chief Pete Arrendondo. Gunshots can be heard in a classroom. But they wait. One officer nonchalantly uses hand sanitizer. One checks his cell phone.

Drawing the ire, the outrage, and the disgust of the entire nation, the video paints a picture of a police force without true leadership and an entire school filled with children and teachers who were sitting ducks to a madman. Those who swore to protect and serve stood by, hearing the gunshots and remaining unresponsive to the screams.

Law Enforcement Officer in Harris County Joe Danna commented on the police response to the Uvalde shooting. “While I reserve judgment until the investigation is complete, it appears that the officers did nothing and the training apparently was close to zero.”

Those in the police force have questioned the media’s release of the video, as it does not follow standard procedure. Crime-scene video is always released to family members and the community first, before the general public. Texas state politician Dustin Burrows had announced the plan to follow that protocol, but the Austin-American Statesman and Austin-based television station KVUE chose to do otherwise. 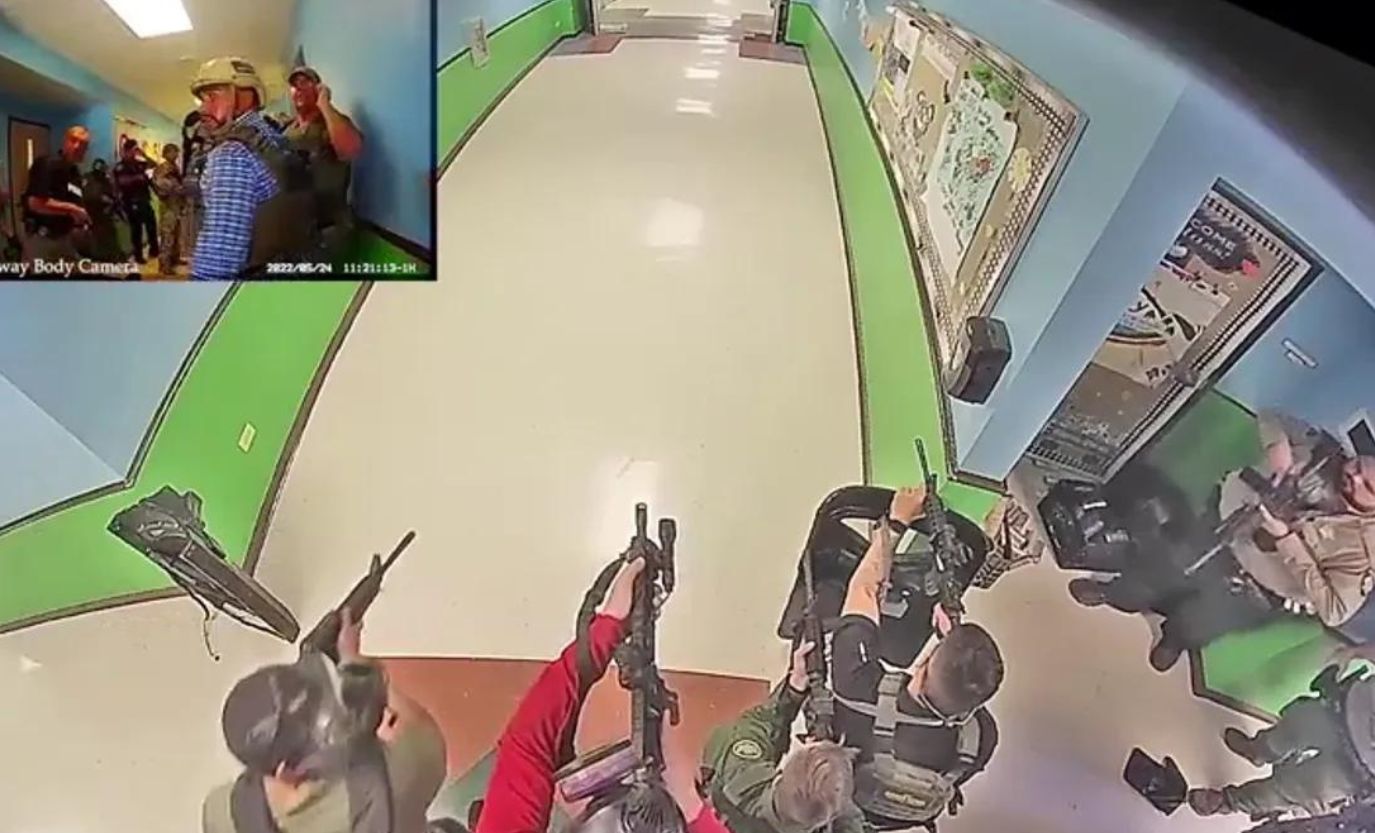 “Both media outlets have elected to release that footage Tuesday to provide transparency to the community, showing what happened as officials waited to enter that classroom,” KVUE stated in its article on the footage. The video shows officers arriving just three minutes after the gunman but doing nothing to stop him until 70 minutes later. Twenty-one people lay dead at the hands of a gunman surrounded by a cadre of armed police officers.

The confirmation of that unbelievable fact has spurred anger across the nation, exactly what the video-release protocol is supposed to prevent. Officers have quickly been identified, making them a target for emotional and furious viewers who still don’t know the full story. For example, one officer took a great amount of abuse for checking his cell phone during the massacre. As the investigation continued in the next couple of days, however, it was revealed that his wife was one of the slain teachers, who had called him just before her death.

For these reasons, Danna agrees that the video was released to the public too soon, before the Uvalde community had an opportunity to review it, and before all the facts can be shared along with the video. “What happened in Uvalde is horrific, but the general public has no urgent need to see that. If I become sheriff of Harris County, I won’t release videos except to the families.”

A statement made on Governor Abbott’s behalf said, “He is disheartened and disappointed that this video was leaked before the victims’ families and the Uvalde community — those most affected by this tragedy — had the opportunity to view it.

“The governor has been clear since day one that he expects all information surrounding the tragedy at Robb School Elementary to be released, and we do appreciate that the Uvalde community is getting answers. The investigations being conducted by the Texas Rangers and the FBI are ongoing, and we look forward to the full results being shared with the victims’ families and the public, who deserve the full truth of what happened that tragic day.”