I reached out to a young, local resident who was in Washington, DC on Wednesday, January 6, 2021, and asked her to share her story. She agreed to do so on the condition of anonymity. This is her firsthand mostly unedited account as to what happened.

I flew into DC on the 5th. Both of the two connecting airline flights were filled with patriots, Trump merchandise, chanting and excited chatter about the days to come.

On the morning of the 6th, the group that I was with arrived at Capitol Hill at 7:00 a.m., and the place was already swarming with people of every color, race, and background. We stood, listened, chatted, watched, and talked until noon. When President Donald Trump started to speak to a group of two million patriots, the energy was electric, and the space got tighter as more people packed in to hear the President’s message.

He spoke for an hour and encouraged patriots to fight, to respect the US Constitution, peacefully make their voices known and inspired us to never back down. He also revealed all of the fraud allegations and irregularities that had been documented by the Trump campaign legal team. 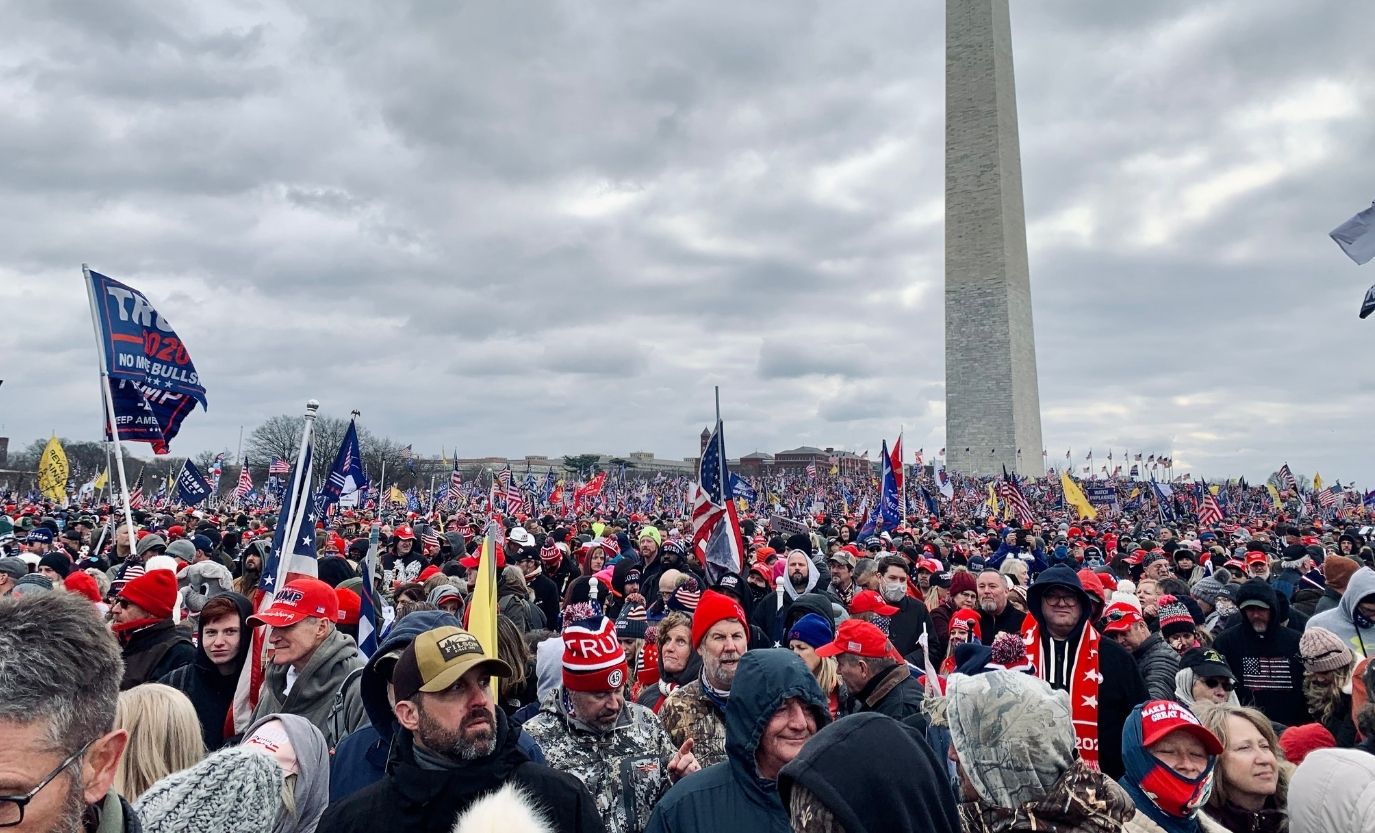 After his speech, Trump directed all of the patriots to walk down Pennsylvania Avenue toward the Capitol Building and let their voices be known! My group and I walked, following the hundreds of people there to peacefully protest, waving flags and praying. As the Capitol grew closer, we determined to get as near as we could to the front lines. We came from the entrance with the fountain and statues in front of it, so I do not account for much else that happened on other sides of the building.

I looked ahead and I saw patriots closing in on the top levels of the multi-tiered building, working their way up the scaffolding (which was there for construction, I assume), the flags were getting raised higher and the voices were getting louder. My group began walking and as the crowds got thicker, I noticed there were silver barriers that were disconnected from each other that created walkways for patriots to get through. We then came up to a wall, where there were sets of people helping others over the 4-foot-high wall. I thought this to be weird and surely not allowed, since this was my very first protest. But my group launched themselves over the wall and onto the other side. Everyone around me – young and some incredibly old – were laughing and enjoying themselves.

There was green fencing right around the perimeter of the wall that had been cut and trampled on. We then moved forward up a hill with a very slight incline up to another wall. More sets of patriots were helping people of every age over the walls. At the top of the Capitol something that sounded like a weak gunshot went off and yellow smoke arose on the right side where the scaffolding was. One of my friends said it was teargas. We kept moving closer to see if we could get any news on how the process of certification was going and yet another concrete wall with patriots helping others over emerged and this time, instead of landing on grass: we landed on concrete flooring of the first layer of the Capitol Building.

We slowly climbed the stairs, drums started playing (from a guy dressed as a confederate soldier), teargas was being thrown as we watched more and more people swarm up toward the top. Eventually, someone found a staircase to the top level (this is best known because it is where the president is inaugurated before all the people), my group made our way to the top – coughing because we got teargas in our throats. There were two windows flanking a door in the center of the last floor. People were chanting, singing, and praying. 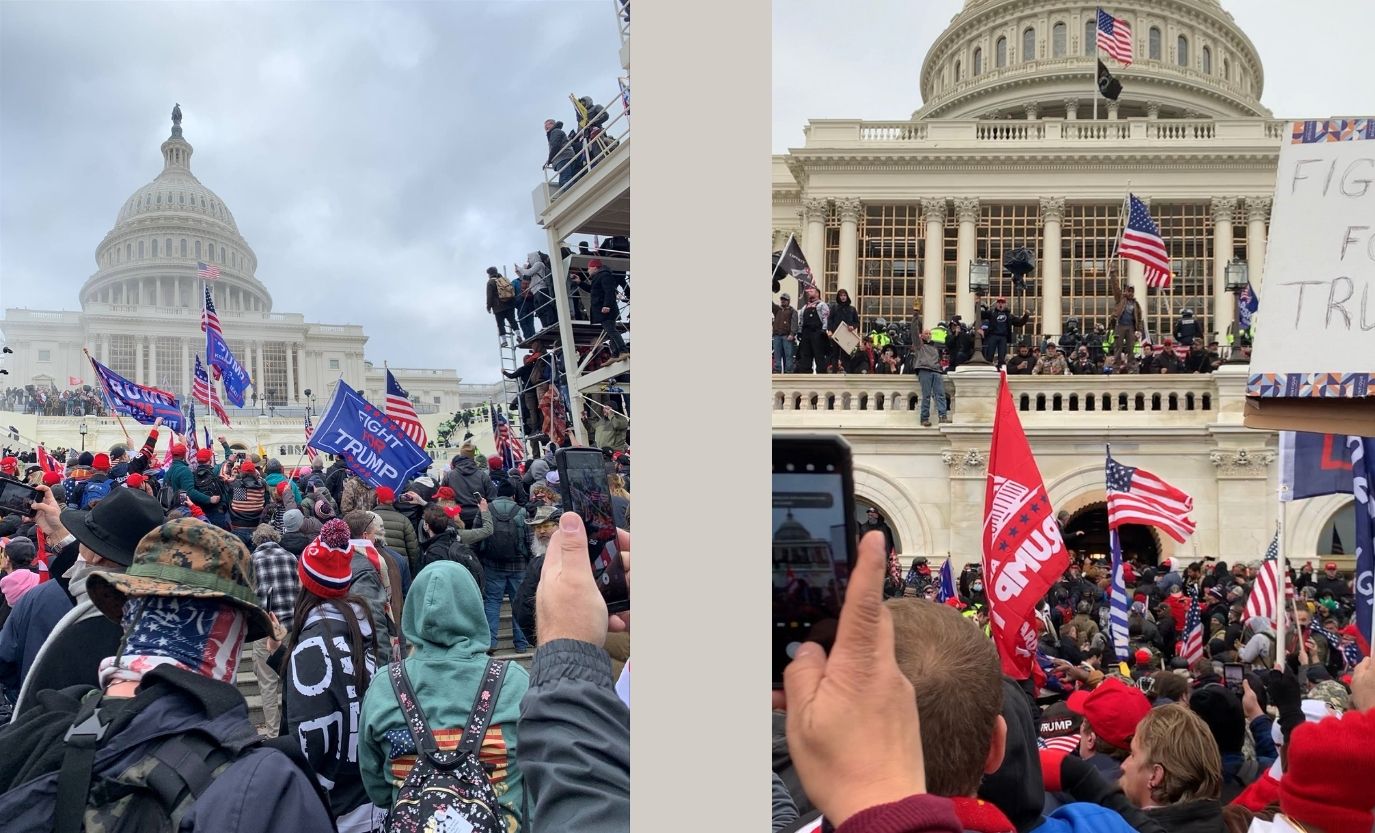 I would like to note, only 4-5 times did real teargas get thrown at people in my 3-hour experience of being at the Capitol. Most people were praying, singing, chanting, and waving their flags at the crowds behind on the lower levels.

My friend and I began to notice people dressed in black more frequently who had outdated or no-Trump merchandise with full backpacks. I stayed back at the inauguration spot as we witnessed people in all black start to weave into and rile a crowd up to go into the building. This is when the real chaos started.

At one point, a man dressed in black began pounding on the bulletproof window with some kind of window breaking tool: Trump supporters grabbed him, disarmed him, and began fighting him (The crowd also booed at the vandalizer). A group then formed, heaving at the center doorway, where police with shields, dressed in black began pushing them back. The chants got louder as the people who had just came in dressed in black riled the crowd up.  Just then, all of the cell service for our phones turned back on (as it had not been on all day for overload of all servers).

Now whether this is coincidence or a planned timing so broadcasters could share the newly incited violence, I do not know: but it was a very odd time for everyone to receive all of the texts and calls we had not gotten yet. At one time, Trump supporters grabbed a policeman and brought him in to the crowd of protestors: we all yelled to let the policeman go and do not touch or hurt him. They held his head over the balcony with a 40-foot drop (we were afraid that they had gotten too carried away and were going to chuck him over the wall!), but in fact, the police officer had gotten sprayed in his eyes with teargas and needed air. The Trump supporters were helping the officer. At this point, a huge group of women on the top layer began to pray, we understood that this could escalate into something bad. Prayers were spread to stop the demonic spirits of violence from taking over. More people in black helmets banged on the windows and more Trump supporters wrestled them down and disarmed them. 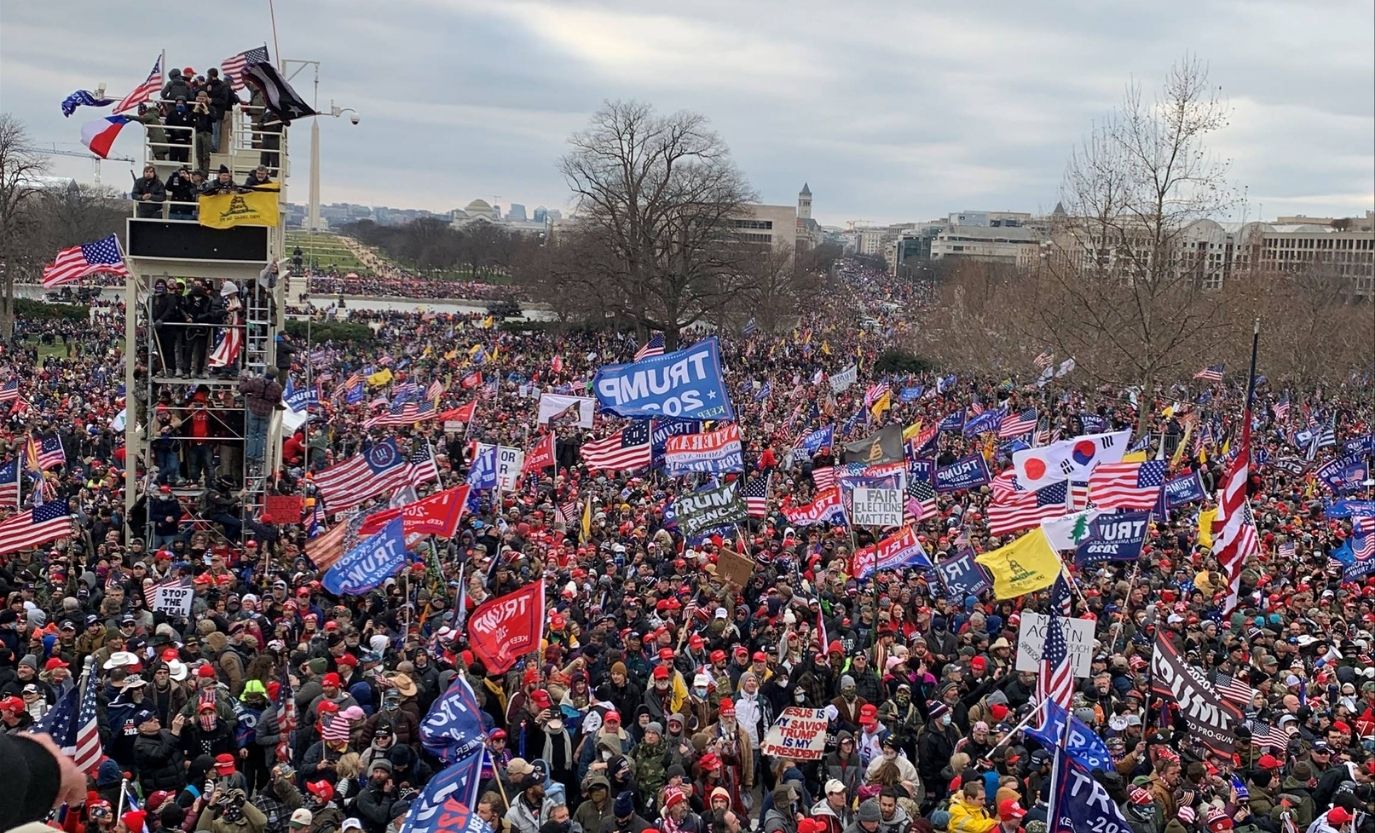 The fight for the center door went back and forth until apparently some people got inside the building.

After my group heard the news about the Air Force veteran woman who tragically got shot inside the building: we decided to head home.

All I can say is, 99 percent of Trump supporters had no bad intentions, in fact, they were prayerful, singing and waving their flags. They were angry, yes, but they did not want blood or to vandalize anything (many brief conversations happened during my time up there and I can confirm, nobody wanted real violence for we knew the affect it would have in the media). The one percent who went into the Capitol and stole, were riled up by people dressed in all black, who were armed and who were shouting things to make people angrier.

In my experience, no violence happened until people with black outfits and outdated merchandise were getting involved. Later I heard that a large bus of Antifa was shipped in just the night before.

What I am left with is the question: How far is too far? Peacefully protesting and praying? Not too far. Crowding the building, with chants and singing? Not too far. Climbing the building and breaking down doors and windows? Too far. Going in and stealing, sitting on the chairs, and ransacking offices? Too far. An unnecessary death at a mostly peaceful protest? Too far. Our voice was heard in the masses, not in the loss. But, from my own experience, it was peaceful and patriotic until people dressed in black showed up and began breaking the windows, pushing on the doors, and yelling at the Trump supporters who were leaving the premises.

Local Contests Introduce Young People to the Pro-Life Cause