I had the privilege of talking with Christian rocker Patrick Shipley of Faith Head, an alternative, hard-rocking band (like Atomic Opera, featured last week) that aims to bring non-believers to Christ and believers to a closer relationship with Him.

Q: I personally dig hard/alternative rock, but it’s not everyone’s cup of tea. What has been the reaction/feedback when you perform at churches? Are we ready for hard rock-based services?

A: I don’t think what Faith Head does is designed for regular church worship. That’s the great misconception about what we do from the Christian and the secular worldviews of Faith Head. We go where the average Christian artist can’t or won’t go. Our music is predominantly for those who don’t have a relationship with Jesus Christ. We do have some songs that are aimed at believers like “Revolution” and “Rise Up” but songs like “Under the Blood” and “Mindless Automatons” are written to speak to a nonbelieving audience. We don’t see much sense in “preaching to the choir.”

I think it’s sad that some believe that the sharing of the Gospel must be contained within the four walls of a building twice on Sunday and once on Wednesday. We take the “Go out into all the world” in Mark 16:15 quite seriously. We played this place in Nashville and a few months later we learned that one of their regular patrons had passed shortly after our performance. It might be hubris but I believe God sent us there for that one man. I would like to say that he was saved while we were there but I don’t know what he did with what we presented after we left. It’s our responsibility to share the Gospel and raise up the name of Jesus Christ – it’s His responsibility to draw them unto Himself.

I grew up playing old Gospel hymns, even playing that music for a time. I appreciate the deep theological message of the music that most of CCM sometimes lack. It has been our goal from the beginning to have that deep theological meaning in our lyrics. I don’t know if I would seek out an all rock church. I like having the blend. I don’t listen to hard rock music all the time, nor do I want to worship God in that style all the time either.

Q.Tell me about your audience. Who are they?

A.We have a mixed bag of fans. Most younger kids are into pop and rap music. Our audience is predominantly between late twenties and late forties. But if we have the opportunity to perform and do what we do live in front of an audience, we typically win over the whole audience. If we get to play to a younger audience, hard rock music is a new experience for them, which is fun.

Q. What songs do you recommend for new listeners?

A. From the first album Are you a Faith Head? “Push” was our most popular single. It’s a universal theme that most people can identify with – even if you don’t know the scriptural reference behind the lyrics. “Revolution” is our most popular streamed song off the first album. The second album Genesys EP yielded a few great singles. Our first single “Old Sin, New Skin” made it into the Top 100 Christian Rock Charts for 2019, which wasn’t bad for a band with no label support and a song that was/is speaking directly against our culture at the moment. “Mindless Automatons” was our most popular and heavily streamed song to date. “Rise Up” gained a lot of traction toward the end of 2019.

The unique thing about our music is that it’s played more on independent secular radio than it is on Christian radio. Our music doesn’t get reported so it doesn’t show up on the charts. I am not saying this to put down Christian radio but rather to speak to God’s power to place His message where He wants it. And that’s fine with us. 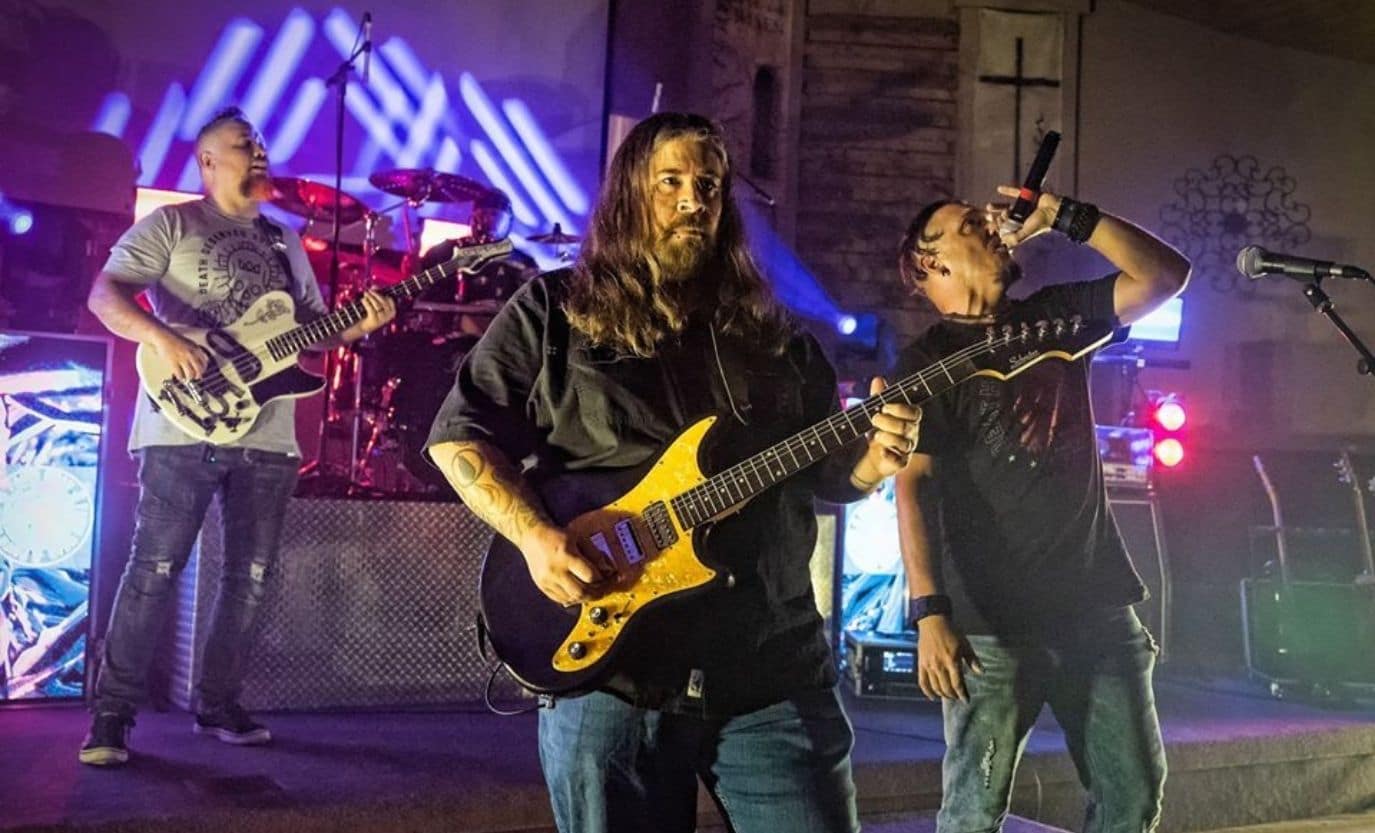 Q. What inspires you to create your music?

A. I can say with confidence that all our songs are Holy Spirit-inspired. Our music always points to hope and to Jesus. The day we stop doing that I will pull the plug. We leave some room for self-interpretation but it should be clear when you listen to our music that it has a different message and energy than regular hard rock music. The best example I can give is a radio DJ up in Boston who was shocked by the positive energy from the music. After she got home and started investigating who we were, she realized that we were a band of the Christian worldview. I love that story and she’s become such a great supporter of the band.

Q. You obviously feel that there are many ways to praise God, pray, and worship. Speak to me about that.

A. Personally, I spent many years as a prodigal son playing music to satisfy myself. I am glad God has given me the opportunity and the privilege to serve Him with the music of Faith Head. What we do is a ministry. None of the band members have ever personally profited from Faith Head’s music. All the money raised goes back in to the ministry. This is a calling; if it were all about me or us – we would have quit a long time ago.

We spend many hours writing music and working our live performance to present something great for the Lord. It’s many hours of sacrifice – time away from our families – just like any other ministry does. But because of our genre, it’s not as respected for whatever reasons.

I correlate genre music and Bible translations to be similar. You need to consume whichever gets you closer to God, whichever helps you with your relationship with Jesus Christ. That’s all we want from our music in the end.

To quote the late, great Dr. Ravi Zacharias, “Music is the one thing that bypasses the brain and goes straight to the heart.”

You can support the band and help them reach others by purchasing merchandise at www.faithhead.bigcartel.com. The proceeds fund the band’s travels to perform for crowds of people yearning to be called closer to God.

How to Use Right Division to Find God’s Words for You, Part 4.