Curtis Brown is a living witness to the truth that God can rescue anyone, and that anyone’s life can dramatically change. A survivor of constant physical and emotional abuse in an alcoholic and opioid-addicted home, Curtis joined the U.S. Army and became a decorated Persian Gulf War veteran. But he left the military with post-traumatic stress disorder, severe neck and spinal injuries, and chemical damage.

In the following years, Curtis endured 19 surgeries, debilitating chronic pain, depression, and severe addiction to prescription drugs. He also fought a Veterans Administration hospital system intent on denying the existence of his injuries, much less healing them. He made endless poor choices and had one broken relationship after another, culminating in a divorce from his first wife. But God intervened, and brought recovery to Curtis physically, emotionally, relationally, and spiritually.

God is Bigger is a life story that, with great transparency, is written for those suffering similar struggles with addiction, abuse, family dysfunction, PTSD, or chronic pain. Above all, it is a story of abounding hope, showing that, with God’s help, no life, and no family, is beyond saving.

This is the story of Curtis Brown, as summarized on the back cover of his book God Is Bigger: His Amazing Rescue from Abuse, Addiction, PTSD, Divorce and Despair. As intriguing as this book teaser is, it’s nothing like hearing from Curtis himself as his emotional story unfolds. As one reader said, “Everyone has a story and Curtis’ story is all one we should look at when we feel at our lowest. His story gives you the will to continue your journey in life with not only God but others as well.”

As Curtis talks, the emotion is palpable. “My life was trying to get my dad’s approval. He had bad addictions to opioids and alcohol, lost a thriving business in California, got in a bad wreck, and lost it all. I didn’t understand what brought him to this point. I just wanted a dad who loved me, who would do things with me. He became very destructive, but I still loved him and wanted his approval.”

But the real, gut-wrenching statement is what comes next, what so many grapple with for entire lifetimes: “I became everything I hated in my dad and worse. Due to my injuries and the VA system, I became addicted to the same drugs that took ahold of my dad.” 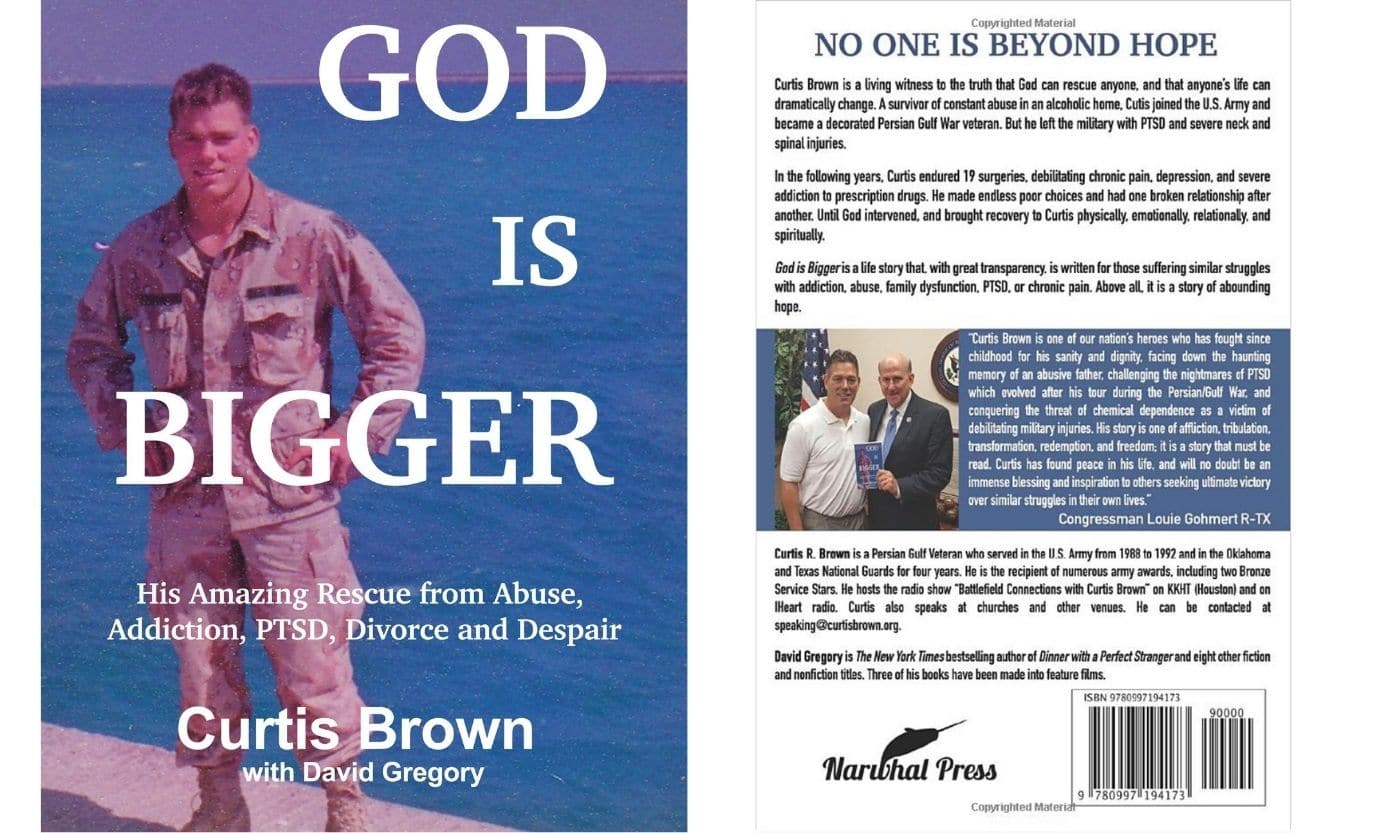 Curtis explained that despite being “one of the most talented mechanics I ever knew,” his father died at 67 from chemical abuse. However, two years before he died, he told Curtis that he had been watching Charles Stanley on TV and he knew the truth. Around that time, Curtis’ first marriage had just ended, he was suffering from addiction to the exact same drugs that were killing his father, and he moved in to his dad’s home.

“It was there that I surrendered to Christ on February 14 2005. Valentine’s Day – when you’ve just been through a divorce and you’re seeing your dad dwindle away – well, I tried to take my own life that night. I overdosed on the very opioids the VA kept giving me, and when I woke up still alive, I had to do something different.

“I was hurting mentally and physically. I had fractures I didn’t know about from a tank accident that occurred right after the Gulf War. God preserved my life and reminded me that He was bringing me out of Egypt. ‘If you don’t turn back now,’ God told me, ‘you’ll be a pillar of salt.’ I simply responded, ‘Whatever you want, Lord.’”

After that, Curtis got plugged into a church and started reading his Bible faithfully. He got on bigchurch.com, a dating site, and met his future wife. She was touched by his profile and her first words to him were “Guard your heart with all diligence.” They have been married almost 15 years, but Curtis is quick to point out that it hasn’t been easy. His first order of business was to get his injuries addressed. He faced non-stop, excruciating pain and was beginning to endure paralysis. The VA appointed him a surgeon to have both neck and lumbar surgeries. That surgeon used the wrong hardware and left him worse off than before the surgeries. Curtis later discovered that the surgeon had lost over 100 malpractice suits, yet the VA continued to refer to him. Again, the VA wanted to medicate Curtis. Instead, Curtis found Dr. Amir Malik here in Houston, who rebuilt his neck , which is now 98% titanium. Curtis has been off medication for five years.

“That’s why I started the Curtis Brown Foundation,” he said. “I want to give veterans the care they deserve.” He has since teamed up with Memorial Hermann, numerous doctors of various specialties, and detox and PTSD specialists to get churches involved with the veteran community. The foundation gives them tools to address real needs, versus dulling pain with opiates, and loves and counsels them through whatever hardships they are facing.

Between the Foundation, his book, and his speaking engagements, Curtis is intent on sharing his life with others so they know they are not alone in their struggles. “God has put it on my heart and reminded me for so many years that even though I had messed up badly and believed God couldn’t or wouldn’t use me again, it’s never too late. There are so many people in that place today and I want them to hear that.”

Especially during this time of Covid, addiction, divorce, and suicide are running rampant. Curtis believes his message is especially crucial now. “People need the Lord! God has given you the perfect stone to take out any giant you face today. You need to step up and fling it.”

All information about Curtis Brown’s book, speaking engagements, and Foundation can be found at curtisbrown.org. Be sure to check out Beyond the Battlefield with Curtis Brown on YouTube.

Rev. Bobby Knowles brings his heart of a servant to Orchard UMC