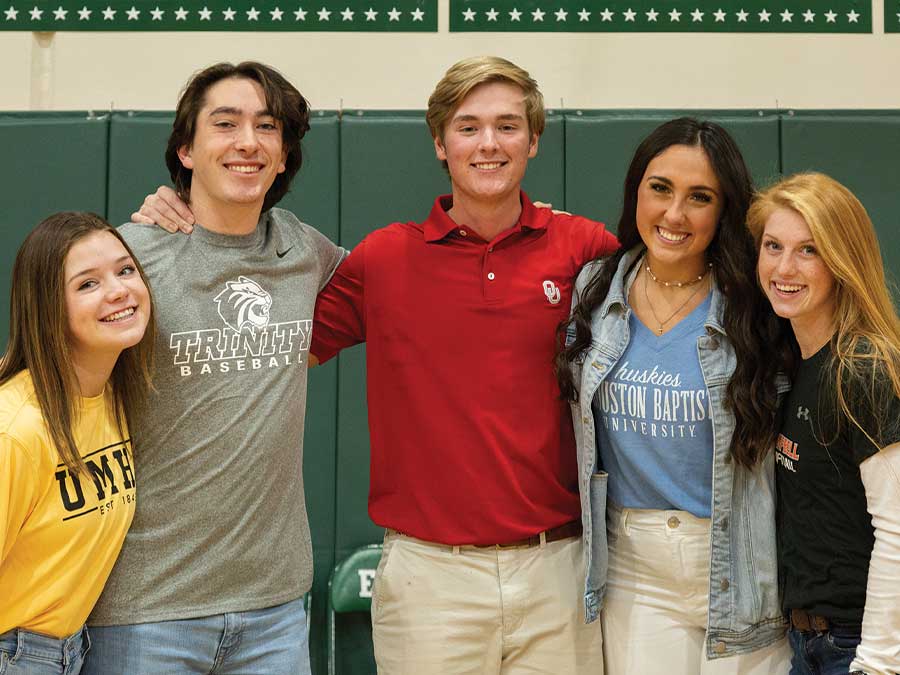 Stephen Campbell Jr. committed to play golf for the University of Oklahoma. He has played golf for 16.5 years – longer than most of his schoolmates have been alive. He won the 2019 TAPPS State Championship by two shots. His accolades include three-time 1st Team All-District, three-time All-Region, and two-time 1st Team All-State, 2019 State Champion, Rolex Honorable Mention All-American, 2019 Wyndham Cup Member and being named to the 2019 Junior President Cup Team representing the United States.

Sarah Kmiecik committed to play golf for the University of Mary Hardin-Baylor. Her favorite memories include shooting even par for the first time, having two chip-in eagles, winning her first tournament, and going to state for the first time. Sarah served as the team captain both her junior and senior years. Her accolades include Academic All-State, 1st team All-State, Christian Character award, MVP award and Scholar-Athlete award.

Kaden Kram committed to play baseball for Trinity University in San Antonio. He has played baseball for the last 12 years; his current select team is the Houston Athletics. His favorite moment was defeating Second Baptist at Minute Maid Park to secure the top spot in District. His accolades include Academic All-State, Scholar-Athlete, Team MVP, 1st Team All-District, and Honorable Mention All-State and the Soaring Eagle Award.

Riley Cargile committed to play softball for Campbell University in Buies Creek, North Carolina. She has played softball for the past 11 years; her current select team is Aces Express Jacoby 18u Gold. Her favorite memories include traveling around the country with her select teammates, winning TAPPS state title twice in a row and going to Disney with the FBCA team. Her accolades include 1st Team All-State, 2nd Team All-State, Academic All-State, the Golden Bat Award and the VYPE Triple Threat Award.

Jackie Jessup committed to play softball for Houston Baptist University. She has been playing softball for the past 11 years; her current select team is Aces Express Jacoby 18u Gold. Her favorite memories include a homerun hit against Second Baptist and winning the TAPPS state title twice in a row. Her accolades include 2nd Team All-District, two-time 1st team All-District, 2nd team All-State, the Golden Glove award and Academic All-State.

Fort Bend Christian Academy is a private, Christian college-preparatory school located in the heart of Sugar Land, Texas. More than 100 FBCA athletes have signed national letters of intent to play at the collegiate level. For more information about FBCA’s top athletes and athletic program, visit the website.

Get to Know Your Republican Candidates