God clearly appointed people to serve in His employ. Some might debate whether appointing, anointing, and selecting are the same, but there are distinctive differences.

When Moses received directions to count the Hebrews shortly after their exodus from Egypt, God gave his CEO the names of specific individuals He wanted Moses to appoint to serve as leaders of the census for each tribe (Numbers 1:1-5). Together, these twelve appointees were to assist the nation’s executive leader in carrying out his assignment, as well as serve as representatives for each tribe, sort of like department heads or a project council of task force leaders.

Likewise, God gave Moses the names of specific people to appoint as leaders of the tribes (Numbers 2:1-34), sort of like governors. Essentially, God gave Moses the slate of names, and then Moses executed God’s plan by appointing the individuals to their positions. The Boss made decisions and initiated strategic arrangements, while the general manager implemented and administered under His direction.

Shortly thereafter in the timeline of their exodus journey, God gave Moses explicitly detailed instructions on an important building project – a tabernacle with furniture and equipment inside, and a fence and other implements outside. The extremely specific instructions related to materials and measurements, as well as the names of persons chosen to lead the construction.

“I have chosen Bezalel,” God said, “and I have filled him with the Spirit of God, with skill, ability and knowledge in all kinds of crafts” (Exodus 31:2). In addition, “I have appointed Oholiab, the son of Ahisamach …to help him” (31:6), and have given them the ability to teach others (35:34).

In this case, the Boss not only appointed people by name, He gave them the skill, ability, and knowledge to accomplish the project, and gave them the ability to teach others.

Interestingly, this is the first time the Bible describes someone as being “filled” with the Spirit of God. Pharaoh did say something similar about Joseph, “Can we find anyone like this man, one in whom is the spirit of God?” (Genesis 41:38).

But, being filled with the Spirit seems generally something that would describe prophets or priests. Yet, a political ruler (Joseph) and a craftsman (Bezalel) – generally both considered secular professions – are the first ones specifically noted for their apparently unusual gifts of indwelling by the Spirit of God.

The note regarding teaching seems instructive. The ability to teach can itself be a gift; while some may have it, others may not. This means that some people who can do things, and even do them very well, may not also have the gift of teaching. Therefore, asking an expert to teach, who does not also have the ability to teach, might prove a very frustrating experience for both the would-be teacher and student(s).

On the other hand, employing workers gifted in teaching can multiply an educated and trained labor force, and provide a pleasing, productive experience for all involved.

In response to God’s instructions, Moses summoned Bezalel, Oholiab, and every skilled person to whom God had given ability and was willing to work (Exodus 36:2). This added information may imply that some people had skills, ability, and knowledge, but lacked the desire to work, while others may have been willing to work but lacked the appropriate skill, ability, and knowledge. Perhaps willing learners can be taught, but unwilling, uncooperative workers – even if they are experts – may not work out so well.

How many of us have known brilliant, incredibly talented people whose laziness sabotaged their prospects for success, while others with lesser abilities find success nevertheless because of their willingness to work hard?

Hence, key characteristics related to hiring well through appointing may include seeking persons with:

• The ability to teach, if educating others is a needed skill. Otherwise, this characteristic is irrelevant.

The Ability to See

We might dismissively think to ourselves, “Sure! God in all of His creative excellence and majestic divinity can easily gift others with ability, skills, and knowledge, but I doubt that such abilities are within our realm as humans.”

However, bosses do have great power to give to others. Most people gain abilities, skills and knowledge by gifts and opportunities afforded them by family members, friends, teachers, preachers, leaders, coaches, bosses and co-workers. Gifts can shape futures. Opportunities for people to do certain things and go certain places can open worlds that they have never known and that can lead to degrees, careers, and lifetimes of adventures, discoveries, and life-changing actions.

In 1936, Philippe Tailliez gave a friend a pair of swimming goggles. What Jacques Cousteau saw when he opened his eyes in the ocean led him to set about designing a device to allow people to breathe underwater so they could see more for longer. Cousteau’s amazing and influential career over the next 60 years as undersea explorer, inventor, photographer, filmmaker, and scientist began with that simple gift.

Coaches often positively affect individuals and families for generations through their efforts to help athletes gain and increase in their ability, skills, and knowledge. Coaches can help players more clearly see their own realistic potential.

A small-town boy from Pewaukee, Wisconsin, J. J. Watt rose to national prominence in 2011 after his selection as the #11 Overall Pick in the NFL Draft by the Houston Texans. He went on to earn NFL Defensive Player of the Year in 2012, 2014, and 2015, as well as Sports Illustrated Sportsperson of the Year in 2017.

In a 2016 speech in Port Arthur, Texas, Watt credited a former Texans coach, Wade Phillips, for helping him succeed.

“Wade saw something in me that nobody else saw in me — and that I might not even have seen in myself. But that’s the type of man that Wade Phillips is. He leads you to be what you can be, not what you are. He’s the man who taught me that my abilities could far exceed anything that my dreams ever imagined, if I was willing to put in the work, if I was willing to listen, if I was willing to play within the system that he’s created, and just go out and give it everything I had. So I did. And here I am today, thankful for everything that I’ve been able to accomplish in my career so far, because of Wade Phillips…Because he helped teach me about the game of football. Because he helped me believe in myself as a player and as a man.”

Coaches, including bosses and managers at every level, can help others see things they have never seen before, including new perspectives of themselves. This can happen through appointment to key positions or roles, through the provision of training resources, continuing education, conferences and seminars, gifts of new equipment and tools, and in myriad other ways.

Bosses can truly both appoint and gift. In some cases, God Himself may draft an individual by name and call them up through another leader to do something He wants done.

Lady with the Lamp

During the 1830’s, a young English maiden experienced several “calls from God” that she interpreted as summons to invest her life in reducing human suffering. Though work in nursing seemed a suitable route to her teenage mind to serve both God and people, her family thwarted her attempts to seek nurse’s training because they considered such activity inappropriate for a woman of her stature.

After caring for several ailing family members, Florence Nightingale began studying nursing on her own, reading any nursing-related writings she could find, volunteering in medical facilities, informally studying treatments and results, and taking a couple of short two or three-week nursing courses. Despite continued opposition from her family, she received an appointment in 1853 at age 33 as volunteer Superintendent of Nurses at the Institution for the Care of Sick Gentlewomen in Distressed Circumstances in London.

When Britain and France responded in March 1854 to Russia’s invasions into areas of the Turkish Ottoman Empire, the British transported their wounded from the fighting in Crimea 300 miles across the Black Sea to just outside of what is now Istanbul, Turkey.

In October 1854, Secretary of War Sir Sidney Herbert reached out to Florence and appointed her to gather some nurses to assist with caring for the 18,000 wounded and dying men trapped in the quarter mile long hallways and deplorable, cholera- and lice-infected rooms at the Barracks Hospital.

Over the next 21 months, Florence and her team of 37 nurses led the caretaking and worked to improve recovery conditions. They instituted a system of triage, improved sanitation and the quality of food and water, washed the soldiers and linens regularly, and Florence personally made so many rounds carrying a lamp throughout the nights that she became known as the “Lady with the Lamp.”

Florence Nightingale’s perceived initial call from God, and her appointments to serve, led to a lifelong and groundbreaking career that laid the foundation for the philosophy of modern healthcare, transformed nursing into a respectable profession, and improved health standards worldwide. She published over 200 resources on hospital planning and organization that still impact healthcare today, including ward designs, infection control measures, and the championing of a healthy diet. She also identified the need for specialists, invented the pie chart, and inspired the founding of the International Red Cross.

She clearly seems to have derived her call and passion from God, and her ability to fulfill those came through persons with perhaps divine and certainly human power and authority appointing her to available opportunities in organizations where she could faithfully and extraordinarily live them out.

Hiring well includes working in partnership with others, including God, to identify and gainfully employ people with the appropriate skills, abilities, and knowledge needed. Some people know themselves and their intended path well enough to pursue proper training and seek fitting opportunities, while others may need assistance in developing and understanding their own potential.

• What are my own skills, abilities, and knowledge?

• Do I have the ability to teach?

• Where would other, unbiased people place me on the work ethic scale?

• Have others helped me succeed by giving me something? Who? What?

• Have I helped others succeed by giving them something? Who? What?

• Are there others I can help? How? When?

Excerpt from “Boss Like God: A Blueprint for Elite Workplace Performance” (© 2018 K. Lynn Lewis and Beau McBeth), a contemporary, practical review of business relationships recorded in the Old Testament books of the Bible that explores how the Supreme CEO hired employees, managed them, even fired some, and helped employees execute transitions in leadership. Purchase online from Amazon.com or visit BossLikeGod.com. Dr. Lewis can be reached at Lynn.Lewis@TheBibleSeminary.org. 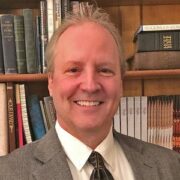 A seasoned entrepreneur with a diverse professional background of more than 35 years in business, education, and ministry, Dr. K. Lynn Lewis has worked as an engineer, senior pastor, administrator, director, and CEO, and served in leadership in a variety of organizations and on numerous boards. He currently serves as President of The Bible Seminary. Founder of InspireUSA: Celebrating the Best of America®, his productions and publications include many articles, several books, a cable TV show, dissertation, magazines, musicals, songs, videos, and web sites.

Witnessing in the Workplace