Pastor John C. Crowe felt a call to ministry when he was still just a teenager. His family had been a part of planting and growing Kingsland Baptist Church in Katy, TX, and that is where God called him into ministry. This call has led Pastor Crowe to share the message of God’s love both in the United States and in communities all over the world. He attended Howard Payne University in Brownwood, TX, where he met his wife Diane. The two were married just one week after graduation and then quickly moved to The Big Easy so that Crowe could attend New Orleans Baptist Theological Seminary. “I stayed in New Orleans for 12 years doing a variety of different things, and then God called me back to Fulshear in 2000,” the pastor said. So, he and Diane and their two sons, Justin and Michael moved back to their home state and realized that God was beginning to work in a big way in the Fulshear area.

“There were five families living in Fulshear who were attending Baptist churches in parts of Houston. They ran into each other one day and said, what do we need to do to get a church out here?” Crowe said. “So, they contacted Kingsland Baptist Church and the church said, we’ll help you.” After the church plant seed was planted, Crowe felt God calling him to lead this new church of believers. River Bend Baptist Church is now a thriving congregation that has over 200 people on a Sunday morning, and has done more than their fair share to better not only the community around them, but the global community as well. “For River Bend, missions are very important,” he said. “We teach it and preach it, but we also go.” Over the past 18 years, the church has had its hands in many different projects including helping to start churches in other countries. 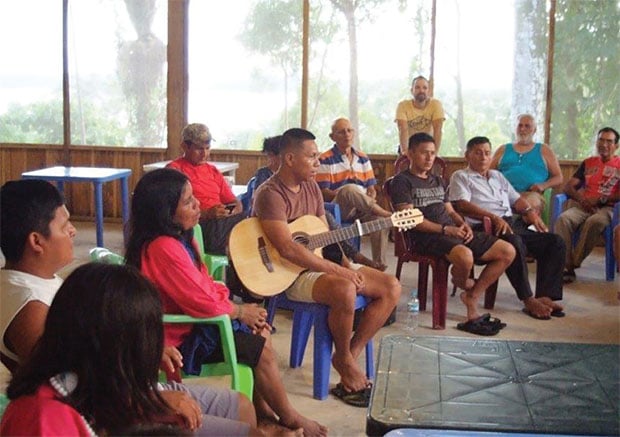 “In 2012, we planted a church in a little village in Belize through missionaries who work there, Bob and Rhonda Farley,” Crowe said. “We started with all of the things that you do when you partner with missions in a foreign country. We did VBS, building projects, a women’s conference, evangelistic things, prayer walking and food programs.” The church even started a blanket project for the people of the village for when temperatures dropped into the low 60s—a cold snap for people living so close to the Equator.

“Our youth led us to make 45 blankets, which we brought with us on one of our trips,” he said. “The people were so grateful to get these blankets.” Although the village had a core group of believers when River Bend got involved, the pastor said it was difficult to speak into the lives of the villagers in the beginning days of their partnership because they were still deeply entrenched in the tribal worship of their ancestors.

“The Garifuna people in this area trace their ancestry back to Africa,” Crowe said. “They practice animism and ancestry worship. We stayed faithful and soon the people slowly began to place their trust in Christ, and stopped living out of fear of what their ancestors may do to them.” After several years of partnering with the village in Belize, the pastor began to feel like God was leading them in a new direction.

“We discovered a little island in Peru about two years ago,” he said. “We walked onto the island and we found four believers. They were just so grateful that other people who claimed Jesus Christ showed up.” Since that first encounter members of River Bend have journeyed back to the island partnering with believers there to help with worship, Bible study, children’s programs and most recently to dig a water well. “Right now, the people are either drinking directly out of the Amazon [River] or they’re digging shallow ponds or collection areas around their homes to collect rain water,” the pastor said. “But our goal is to dig 10 wells in five years all over the island so that the people have fresh water. This will help to prevent some of the diseases and illnesses that the people suffer from.”

But Pastor Crowe and his church aren’t just helping those in foreign lands. They are also working to improve the lives of those back home. “While the other mission work was going on, we were doing work in

Brookshire with a group called Hip Hop Hope—a program designed to reach disenfranchised youth in very poor sections across the city of Houston.” River Bend provided the group with a revival tent, food for more than 100 youth who attended the events every Thursday night, and child care for the younger brothers and sisters that were left in their charge. “From this gathering came a house church called Out the Box, which is still going on,” he said. “It was a very fresh and edgy way to reach the youth of Brookshire.”

In Fulshear, the church has partnered with a ministry called Family Hope to bring meals to the very poor in the area. The meals are provided by another organization called Second Mile out of Sugar Land, and River Bend and its partners do the serving. The giveaway takes place the second Saturday of every month at Parkway Fellowship in Katy, TX. While it might seem out of the ordinary for a church to be partnering with so many other organizations to serve its people, Crowe said this is an intentional strategy. “We don’t have the resources to do everything, so we find those people who are doing it well, and partner with them and help them to do the work that God has put them in place to do,” he said. “That’s the way we can exponentially expand the kingdom of Christ.”

And while the pastor’s duties are numerous, Crowe believes that in order to lead his people to do big things for God, he must first “go” as well. “I’m not in all of those areas all of the time, but I have been in all of those ministries,” he said. “I’ve traveled to Belize and Peru, taken care of children in Brookshire , and in Fulshear handed out meals to needy families. I’ve had my hands in all of these areas, and as I go, I take our church members and continue building vision.”

When new volunteers or laborers for the cause have accepted the vision, then the pastor says, go forth and moves on to the next place God is leading the church. Helping and serving other isn’t just an obligation of ministry for the pastor. He believes in the relational aspect of ministry. To him, it’s all about the one-on-one. “I love to preach the Word, but I love to talk to people afterwards about what God is doing in their life,” he said. “Shepherding is high in my calling; just being very close to people and walking with them as they go through life is important.”

This philosophy has carried over into the congregation, and Crowe says that the church as a whole is very relational. River Bend is known for being warm and inviting, and the pastor hopes that even as the church grows, they will continue to maintain those meaningful relationships. “Church growth is not only measured in numbers or the bottom line,” he said. “Church growth is not just how many people have come to know Christ as Lord and Savior, but also how many hands you have held, how many tears have you shed, and how many times have you walked with people through the dark times of their lives. That tends to be how I measure church work and church ministry.”