Lately I’ve been troubled by the extent of violence, anger, hatred and destruction that I see. It seems like there is a new report of terrorism every time I turn around. We hear about hate crimes, vandalism, brutality and backlash. Each incident stirs up more fear in our already fearful hearts. That same fear causes us to withdraw from one another. We become isolated, separating from anyone different than ourselves.

So what is to be done? What can one man or one woman do in the face of so much hatred and violence? How do we keep our children safe? And how will we ever see true change? 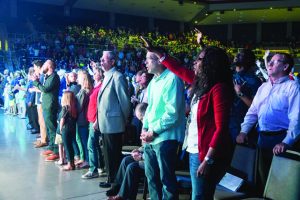 Well, I don’t know much, but I trust these words from Zechariah 4:6 “Not by might, nor by power, but by my Spirit, says the LORD of hosts.” But what does that even mean? I think it means that God can accomplish what we cannot do alone. Of course, we have our part to play. Love and respect are always appropriate answers.

But ultimately, the battle is spiritual. My pastor recently shared in a sermon that prayer averted disaster at a Super Bowl. Someone had a terrible dream about violence and destruction at the nationally televised game and took it seriously. She took some friends to the stadium and prayed the day before the game. It was later revealed that a man who intended to do harm had “a sudden change of heart” in the stadium parking lot and called his father crying instead of carrying out his wicked plan. Wow. Prayer works.

Peter admonishes us to “…have unity of mind, sympathy, brotherly love, a tender heart, and humble mind.” (1 Peter 3: 8-9) He says it is what we are called to. We are called to not “repay evil for evil.” How can we have unity of mind with those we disagree with? It sounds like an impossible task. And yet we are called to it. I submit that we can always find SOMETHING to agree on! The aforementioned love and respect for instance. That’s a good start.

We have a weapon with which we can destroy strongholds of hatred and violence.. It is available to all who call on the name of God. We have a belt of truth and a breastplate of righteousness. We have a shield of faith that extinguishes the flaming darts of the evil one. And the one offensive weapon we have been given is the word of God. (Ephesians 6: 10 – 18) That’s what we can agree on. The word of God. 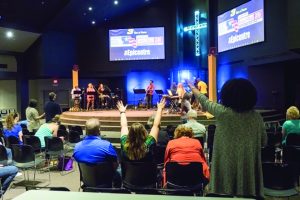 In Katy, Texas churches from every denomination join together annually to do just that. Once a year we can come together for the National Day of Prayer and we agree on the word of God, the value of unity and of forgiveness. Pastors from many different churches lead more than 4000 people in prayer for our nation, our city, our schools and for our families. We stand together, different, and yet the same, and united in Christ we hold up that shield of faith over Katy, Texas. We vote different, we look different, we worship different, but we can agree on the cross.

Jesus said there was power in unity. He prayed that we would be one like he was one with the Father. He said that our unity would be a witness to the unbelieving. (John 17:20-26) If Jesus wanted it, then I want it too. We should all want it.

So come, stand with me on May 4th. Let’s do what we can. Come be the change we so long for. Let’s take up the shield of faith and the word of God to do battle for the Kingdom of God.

First Annual Katy Resurrection Run is Right Around the Corner