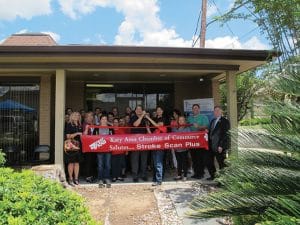 When Maria and Diego Ramirez went to a friend’s house to enjoy playing music, they didn’t know they were about to begin a journey that would lead them to save countless lives.

In 2001, at that very important jam session, the couple met a musician who had been laid off and was looking for a place to live.

“At the time, I was renovating a town home that I had recently purchased,” Diego said. “I told him I’d let him live there if he helped me renovate the home.”

The man was a sonographer and had been working for a company doing preventative screenings. Diego Ramirez and his new tenant became friends and began discussing the possibility of starting their own scanning company.

“So, I got the financing together, and within a few months we started the business out of [the town home],” he said.

The business, which is called Stroke Scan Plus, uses harmless and painless ultrasound technology to look inside a patient’s arteries and organs for plaque and disease before it presents with any physical symptoms.

“We’re able to see if you have the beginnings of an aneurysm, or cysts or nodules that could later become malignant.” 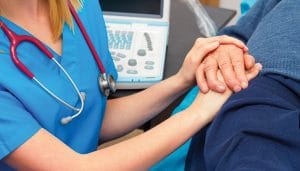 The couple employs radiologists who interpret the exam, and certified sonographers who perform the scans. And although the company first began in a town home, it now has a Texas-based office in Katy and five mobile units who perform scans in 40 different states.

The Ramirez’s and their staff have scanned more than 200,000 people in the 15 years they have been in business, and continually hear success stories from those they have scanned.

Tammie Rushing signed up for a scan for a pharmaceutical discount over her normal hospital administered test, and found that she had a severe blockage in her Carotid artery. Feeling no symptoms, Rushing went to her medical doctor, and he ordered a similar test.

“From that appointment I was sent to a cardiologist who performed a heart cath and found that I had a 99 percent blockage,” she said. “I was taken immediately to surgery, and the artery was taken out, repaired and replaced.”

Ramirez said he’s heard stories like Rushing’s over and over again, and that patients who receive the scan often don’t know they are sick.

“Typically people are asymptomatic. They may know that somebody in their family died of stroke or aneurysm, but they aren’t feeling badly,” he said. “If we can find plaque and catch the blockage early, then we can reduce the number of strokes and aneurysms by finding that disease in the arteries.”

Educating communities about the scans and the effects of these diseases can also help to save lives, Ramirez said.

Ramirez and his staff aren’t only passionate about helping build stronger, healthier communities through education and preventative screenings, but they are also passionate about their faith.

“We pray a lot,” he said. “We always rely on God for our guidance. We know that anything that happens—good or bad—is God’s will.”

Ramirez said he and his wife not only go to God for all of their big decisions, but they also ask their employees to do the same.

“It’s important for us to do a good job, and provide a good service,” Ramirez said. “I would hope that somebody would invite us to their company, organization, club, or church, and help us offer our services to their constituents.”

Dear Doctor: What is “Swimmer’s Ear” and How Can I Prevent It?