It looks like the November Presidential election will pit Donald Trump against Hillary Clinton.  There are those who say they will never vote for Trump.  Those folks have three choices.  They could vote for Hillary.  We will talk about what that means in a moment.  Second, they could vote for a third party candidate if one exists by November.  That is tantamount to voting for Hillary.  Third, they could just stay home on Election Day.  That will guarantee the election of Hillary. 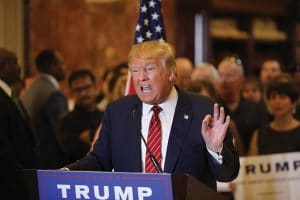 How bad would the election of Hillary be?  We currently have a president whose economic policies have created the slowest recovery from a recession in history.  Our current President, with the help of Harry Reid, Nancy Pelosi and Democrats in Congress forced down our throats a health insurance program that is unaffordable, unconstitutional (according to a Federal Judge in a lawsuit brought by Congress against the Obama Administration) and has caused hiring to slow dramatically, prematurely pulled our troops out of Iraq allowing the takeover of much of that country by ISIS and requiring an increasing number of US ground troops, that he calls advisors, but are in combat situations to retake , used the IRS to target his enemies, gave defacto amnesty to millions of illegal aliens, has used Executive Orders to create and change settled law to his liking, has disregarded the Constitution and grovels at the feet of dictators while showing utter disrespect to our allies.   He has allowed Korea to get away with firing missiles, Russia to invade our allies, an arms race to begin in the middle-east and China to flex its muscles in the China Sea.  The list of failures is breathtaking.

Hillary boasts that she will be a third Obama term.  Oh, but it will be worse.  She also wants to increase taxes even higher.  She wants us to provide “free college” to everyone.  She believes that government is always right and one size fits all, so she will increase the minimum wage by Executive Order across the nation regardless of the local cost of living.  She will continue the Obama plan for more control over our lives by big government with the EPA, the IRS, the Energy Department and the Department of Education.

A President Hillary Clinton will expand welfare, continue the out of control spending we currently have, destroy the oil industry as she and Obama have the coal industry and take away our Second Amendment rights.  She will divide us and find ever more “victims” to which she will grant special rights.

Many of Obama’s most destructive actions have been by executive order.  The next President will either repeal those orders or renew them.  The next President will make key appointments to agencies across government and in the military.  Is there any doubt that a President Hillary will double down on the Executive Orders and appoint more liberals, socialists, and the “victim” class to the Justice Department, the EPA, The Education Department, the IRS and every other department in government?

Probably the most important reason that a President Hillary would be a disaster for our nation is the fact that the next President will appoint a replacement for the late Antonin Scalia to the Supreme Court and possibly three others.  All of the unconstitutional actions of President Obama are working their way through the court system and ultimately be decided by a Supreme Court balanced by half liberal and half relatively conservative justices.  There is no doubt a President Hillary would make an appointment that would tilt the court left for a generation.  The damage to our nation by that one appointment alone brings me to this conclusion:

If you love America, you must vote for the Republican candidate, even if it is Trump!

Gary Gillen owns and operates Gillen Pest Control and Gillen Political Strategies in Richmond.  He is the only person in history to have served on both the Richmond City Commission and the Rosenberg City Council.  He was the Chairman of the Republican Party of Fort Bend County 2006-2007. He can be reached at Gary@GaryGillen.com

Don’t Let Your Kids Trade Their Wings for Worms