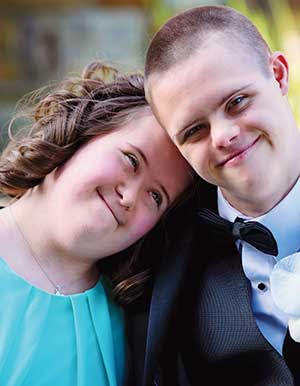 Meet Sydney Simspon and Jake Shabet of Seven Lakes High. Interestingly, their prom date blazed a trail all the way from Katy to New York City!

Famous Photo Shoot
Prom night 2014 was a huge event for Sydney and Jake. Sydney loved getting dressed and focused on looking like Elsa from “Frozen.” According to her mother, “They put snowflakes on her finger and toe nails at the salon, and her mint green dress had little snowflakes.” Jake also enjoyed shopping for his prom attire. “He knew he was looking super sharp the day of the dance!” says his proud mom, who called photographer Nikki Guest to capture this special milestone.

The excitement, photo shoot and limo ride had the prom couple feeling like TV stars… but little did they know they would become real stars! Nikki Guest submitted their photo to the National Down Syndrome Society (NDSS). Out of 2,000 worldwide entries, Sydney and Jake’s photo was selected with 220 other winners to kick off Down Syndrome Awareness Month in October. This unique video presentation airs on the JUMBOTRON at Times Square each fall – and had everyone booking flights for a September trip to NYC! 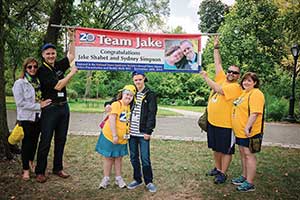 The Big Apple
Sydney and Jake hit the boardwalk on September 20th and saw themselves on the big screen. Sydney visited the largest Toys R US in the nation, and Jake was excited to see the Broadway show “Wicked.” Most importantly, they and their families participated in the Annual Flagship Buddy Walk® with their families. In 1999 NDSS introduced the Times Square Video to bring attention to the Buddy Walk program and raise awareness of individuals with Down syndrome as they work, play and learn.

Photographer Nikki Guest and her extended family also attended, including her husband, sons, mother, 85-year-old grandmother, and sister-in-law. As with every shoot, Nikki prayed that God would help her illicit natural sweet smiles and capture real moments. She was able to do just that amidst beautiful weather and enthusiastic crowds who came from all over the US to support the event. 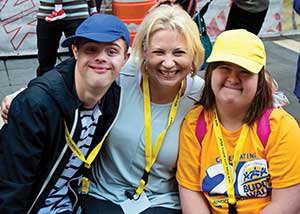 Homegrown Stars
Sydney and Jake met as classmates. Sydney is 17 and graduated in June, but is back as a super senior this year. She and her parents, Brenda and Bart Simpson, moved from Canada to Katy in April 2010. Happily, Sydney’s grandmother was able to travel from Canada to see the big screen debut in NYC! Other family members include Sydney’s cat (and best friend) Blue, as well as Wickie the dog.

Jake is a 17-year-old junior. His family includes parents Alex and Christina, sister Lindsay and dog Masie, plus relatives in New Jersey who were able to join Jake in New York. They created a TEAM Jake banner and wore matching hats!

Jake participates in Special Olympics Texas (swimming), has a first degree Black Belt in Tae Kwon Do, and works as an athletic trainer one class a day and on the sidelines at varsity football games. Currently he is a member of Best Buddies at Seven Lakes High, a global volunteer movement that creates opportunities for one-to-one friendships for people with intellectual and developmental disabilities.

A Message From the Heart
Last year Sydney was a member of Best Buddies, and her Best Buddy mentioned that the best part of the day was seeing Sydney. This special friendship exemplifies what the Simpson family hopes to share with the community – that people should love and accept everyone the way they are.

The Shabets hope people will understand that individuals with Down syndrome are more alike than they are different from others. “Jake is happiest when he is accepted as he is and is included with his peers,” says his mom. “He wants to be seen as just another student at Seven Lakes.”

On a bigger scale, both families hope society will come to realize that individuals with Down Syndrome are capable of so much and can contribute to their communities, if only given the opportunity!
For more information visit www.ndss.org, www.buddywalk.org and www.bestbuddies.org.

Letter From The Editor-in-Chief

Millions Mobilized in the Walk to End Alzheimer’s