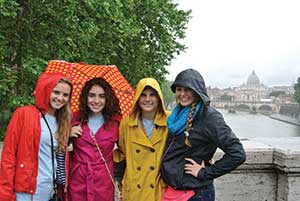 How nice to usher in a new school year with memories of a trip to Rome! Recently a total of 41 Pope John XXIII high school students, faculty, and families, as well as Father Bruce Noble, traveled to Rome to witness the canonization of Popes John Paul II and John XXIII (the school’s patron). The school had initially planned a summer trip to Rome, but moved the date up to coincide with the event in Italy on Divine Mercy Sunday, April 27.

The high school campus binds many communities together and is home to students from all parts of Fort Bend, Katy, Cy-Fair and Houston. During the last school year, 150 of the 375 student body lived in Fort Bend County, with at least 75 commuting from the Sugar Land and Richmond/Rosenberg area. 132 students had Katy addresses. The school has similar enrollment for 2014/2015.

During the course of the trip students prayed the Liturgy of the Hours, had an evening Mass, times of reflection, and meditation. Theology teachers Mr. Tim Caruthers (and his wife Jessi, a doctoral candidate at the University of St. Thomas) and Mr. Mark Baker assisted with the selection of sites based on their connection to Pope John XXIII and the history of Italy. Any student or family member was able to attend the trip as long as they could afford the cost.

Upon arrival, the group reveled in the culture, the architecture of the major basilicas of the Eternal City, and the Christian bond of fellow Catholics from all over the world. We asked them to report back on this incredible journey. 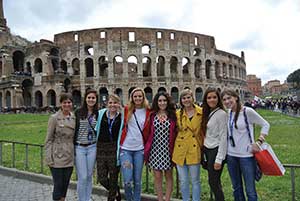 The Vatican announced that delegations from more than 100 countries and at least 24 heads of state were expected to attend. Vatican Radio put the crowds at some 800,000 in the square, roads and gardens around the St. Peter’s area. CNN reported that another 500,000 followed the proceedings on giant screens set up around Rome. The crowds were enormous and filled the streets of Rome before dawn as people vied for a good view.

A small group of students actually camped out the night prior to the canonization in St. Peter’s square with millions of others. “Camping out to get a good spot for the canonization was both the best and worst experience ever!” says student Kara Christopherson. She attended because she knew it would be a once in a lifetime opportunity and enjoyed visiting Assisi and St. Francis’ Basilica. “I witnessed Italian culture first hand and learned about all the churches, and how St. Francis received the stigmata,” she adds.

Lauren Lathrop looked forward to all the fun and amazing experiences, and wasn’t disappointed. “My favorite part was seeing all the different countries come peacefully together with their flags to see Pope John XXIII’s canonization,” she says. She also found that clothes are more expensive in Italy.

Rachel Hamrock felt especially blessed because she attended both John Paul 11 Junior High and Pope John XX111 High School – and was able to witness the canonizations of such great men of faith. Her favorite memory was visiting Florence and experiencing European culture.

Nichol Perez wanted to be able to look back and recall the date that she attended a historic canonization in beautiful Italy, rode a gondola and visited a coliseum. “I learned a lot about the artwork inside of St. Francis’ Church and Michelango’s artwork inside the Sistine Chapel… and the proper way to toss a coin into the Trevi Fountain,” she says.

More Than Just a Vacation

Maddie Vuyk, a junior, was moved by the spiritual component of the journey. She commented, “The greatest part about this trip was that it did not just simply soothe my constantly aching travel sweet tooth, but was a beautiful way in which I was able to experience first hand the art, history, and tradition at the seat of my faith. This was not just a school vacation with a series of educational tours along the way, but a true pilgrimage. The canonization of my school’s patron combined with witnessing his incorruptible body and the massive number of faithful that his actions touched gave this trip a deeper meaning to which all descriptions seem to fall short.”

The students are still talking about their time spent at the Vatican and are now gearing up for a new fall semester. We wish them well during the 2014/2015 school year and also look forward to sharing their upcoming adventures.

Back to School… A New High School Opens in Katy