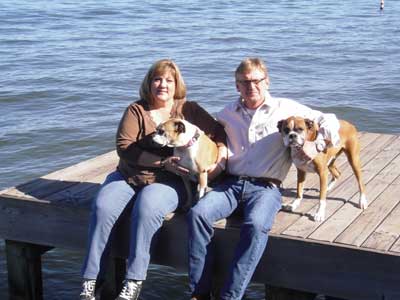 With Valentine’s Day upon us, two high school sweethearts are especially thankful for a furry, four-legged friend named Jewlz. This nine-year-old dog, a Boxer, caused a social media blitz over Thanksgiving, brought several communities together, and also made a special hero out of Sheriff’s Deputy Stephen Jimenez.

The “sweethearts” are Chris and Mark Koehn. If you are an animal advocate, you’ll appreciate their deep devotion to a family pet who survived a harrowing story of “lost and found.”

It all started with the Koehn’s first dog, Piper. Chris had always been a “cat person” and was not a big fan of dogs… until Hurricane Katrina swept Katy in 2005. The family prepared to evacuate to their condo in Conroe, but before leaving Mark secured the outside perimeter of their house. That’s when he learned that a litter of Boxer puppies was about to be abandoned in a neighbor’s garage. Impulsively, he took one of the pups home while other neighbors rescued the rest.

When he brought “Piper” through the front door, Chris was caught totally off guard. “I could not believe he brought home a puppy in the middle of a hurricane!” she recalls. “We loaded two children, three cats, and 8-week-old Piper into our SUV and headed to Conroe.”

So thanks to Piper, Chris became a “dog person” – or rather a “Boxer person” – in a big way! She became a supporter of Lone Star Boxer Rescue and learned about Jelwz, who had endured the hard luck life of a stray on the streets of Baytown. Suffering a broken jaw, she was picked up by the pound and faced euthanasia. Lone Star Boxer Rescue stepped in with a foster family, and when Chris visited the LSBR website she noticed Jewlz’ picture. Both Piper and Jewlz were the same age (nearly two years old) – and it was love at first sight.

The Koehn teens, Carly and Hohlt, quickly turned the frightened, broken-jawed vagabond into a sweet, wiggling furry friend. Once healed of heartworms, Jewlz was living the good life amidst a family who treated her and Piper like “man’s best friends.”

Fast forward to Thanksgiving 2013. Daughter Carly (now 23) was an animal paramedic living in East Bernard. Son Hohlt (20) was away at college in Hawaii. Chris and Mark had sold their empty nest and downsized to the same condo that spared them from Hurricane Katrina. Rather than boarding their “geriatric” dogs, (now nearly nine years old) during a Thanksgiving vacation to Arkansas, they left them with Carly in East Bernard.

Imagine how Carly must have felt coming home from work to find her gate in ruins. Piper had remained in the backyard… but Jewlz was missing. Perhaps her old street habits kicked in, for apparently she had crashed the gate to chase a deer or other wild animal. Carly had the horrible task of informing her parents, who abruptly turned around and headed back.

Chris was hysterical. She and Mark walked the backwoods in freezing rain with a flashlight — all night, every night, the entire week. They appealed to family and friends to spread the word. Two days went by, then three. There was no turkey dinner, for the Koehn family was too caught up in the search for Jewlz… and too busy hoping for a miracle.

Chris and Mark’s son, Hohlt, prayed long distance from Hawaii and posted Jewlz’ reward poster on Facebook to all his old friends in Katy. Other Facebook posts appeared from residents in East Bernard, Conroe, Houston, Austin, Katy, Fulshear, Sugar Land and beyond. Soon the image of Jewlz in her pink collar went viral. Over 1,000 shares occurred on social media, including posts from nearly every rescue group in the Houston area and many throughout the state. It was obvious that an exponential amount of prayers from perfect strangers went up for the poor dog. Chris and Mark plastered East Bernard with flyers and asked postal carriers, UPS delivery drivers, and animal shelters to keep a look out. They also called the Wharton County Sheriff’s Department.

Five days into Jewlz’ disappearance, the Koehn’s headed back to Conroe exhausted, defeated and utterly devastated. But that same day, Deputy Stephen Jimenez went to the East Bernard Sonic for lunch. He had already heard about Jewlz and couldn’t help but notice a “lost Boxer” poster taped to the drive-thru menu. Making his rounds later that day, he spotted a dog limping along seven miles out of town… wearing a pink collar. Sure enough, the tag said “Jewlz.” He scooped her up and called Chris and Mark.

The Koehn’s (and Piper) headed back to East Bernard, an hour and a half drive from Conroe. Deputy Jimenez waited for them while still on his rounds and was dispatched to a call. Jewlz rode shotgun, for he wasn’t about to let her out of his sight! After they all met up, Chris and Mark realized how deeply Jewlz had suffered. The freezing rain, the lack of food and shelter, and the miles she roamed had nearly done her in. Her legs were swollen and the pads on her feet were tattered. Part of her ear was missing and she had a gash on one flank.

Mark put her in the backseat with Piper as Chris hugged Deputy Jimenez, thanking him for being their hero. Had he not been so vigilant, Jewlz would have died lost and all alone. As they headed back to Conroe, Mark noticed Jewlz wasn’t moving and feared she had passed away. Piper kept nudging her. They pulled over, felt a heart beat, and consulted with their vet by cell phone. Jewlz was in shock and needed hydration, warmth, rest and healing.

Chris notes that Jewlz’ is one tough dog to survive five days of the cold, wet weather in the wilderness of East Bernard. She recuperated with a clean bill of health and her spirits bounced back, although her muzzle and forehead whitened noticeably.

“I want to thank my family and friends for all their outreach on Facebook. I wish I could hug every single person who helped find Jewlz,” says Chris. “Good people like Paige Holsapple and other animal rescuers took a personal interest. Justin Perryman, who is running for office in my former district, took the time to post Jewlz’ poster and help find her, which was brought to my attention by my son in Hawaii! Isn’t it amazing how Facebook connects us all across the miles?” Katy Christian Magazine also posted her photo, as did some area businesses. The Wharton County Sheriff’s Department shared the news of her rescue. Dozens of people checked up to see how she was doing after she was miraculously found.

A few weeks after Jewlz came home, the Koehn’s celebrated their 31st wedding anniversary. Jewlz rang in Christmas and New Year’s with the family. Now at Valentine’s, the Koehn’s rejoice in sharing their “puppy love” story and note that they are very, very blessed.

Submit Your Photos and Captions!