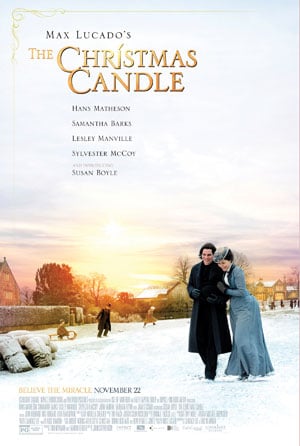 Rick Santorum may be best known as a former U.S. senator and presidential contender, but he’s also involved in faith initiatives. In June 2013 he announced his new venture as CEO of EchoLight Studios to make family-valued movies.

He visited Lakewood Church on November 17 to promote the The Christmas Candle, a major motion picture based on best-selling author Max Lucado’s same-titled book. The full-length feature film debuted at the Katy Cinemark on November 22. It also played at 19 theaters around the Houston area and 400 theaters nationwide.

Susan Boyle, who stars in the movie, is famous for her perfect rendition of “I Dreamed A Dream” on Britain’s Got Talent. She also visited (and sang) at Lakewood Church, to the delight of throngs of fans.

“This major motion picture marks a milestone at the studio,” says Santorum of the film project, which was 10 years in the making. Even in the preliminary stages of film production, Santorum recognized that the plot and quality of acting made the movie something very different and very special.

Although it debuted against competing films such as The Hunger Games, he believes it fills a special need for family audiences. “This film hearkens back to the heartwarming and uplifting movies of yesteryear. The story inspires renewed hope in the miracle of Christmas and illustrates that this holiday is not just about reindeer and receiving gifts,” he says. The mission of The Christmas Candle is to remind audiences of the spirit and sense of wonder of the season – something that is often lost as Christmas becomes commercialized.

Susan Boyle plays the character of Eleanor Hopewell and sings the anthem for the film, “Miracle Hymn.” The cast is filled with highly recognizable talent who bring the story to life.

A Reminder of God’s Bountiful Love

“Surprisingly, a Christmas movie releasing for the holidays is a unique event, as there have been very few in recent years,” says Santorum, noting that The Christmas Candle will remain in theaters as long as it draws viewers. Shot in Gloucestershire, Worcestershire and in the Isle of Man, the setting takes viewers back to a fictional 19th-century village of Gladbury, deep in the heart of the English countryside. Legend has it every 25 years an angel visits the village candlemaker and touches a single candle. Whoever lights this candle receives a miracle on Christmas Eve.

But in 1890 at the dawn of the electric age, a progressive young minister arrives in Gladbury and begins to modernize the village. The miraculous and human collide when the candle goes missing in this timeless Christmas tale.

The Christmas Candle includes quotes from Jesus and the Gospels, and is an alternative to violent movies during this season of peace and joy. Max Lucado, himself, says of the novel and film, “This tale has lifted spirits for seven Christmases, and now, thanks to producer Tom Newman and EchoLight Studios, the Candle story will touch a whole new generation… I couldn’t be more pleased. What an honor to be a part of capturing a slice of this golden era of British history…the light of the candle still flickers.”

Santorum and his wife Karen are devout Catholics and have raised their six children in the faith: Elizabeth, John, Isabella, Sarah, Gabriel and Daniel. We thank him for his service to the nation, his focus on family-friendly films, and for taking time out of his busy schedule to discuss the The Christmas Candle. Learn more about The Christmas Candle movie at www.thechristmascandlemovie.com. Visit EchoLight Studios at echolight.com.&nbsp;